Beat Hazard Ultra: Powered by Your Music, Written in My Bedroom 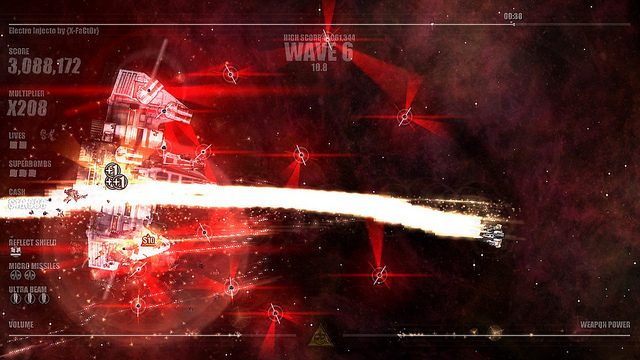 My name is Steve Hunt and I’m excited to talk about my PSN game Beat Hazard Ultra, which hits the PS3 this September. I wrote the game from scratch on my own, in my bedroom!

Beat Hazard Ultra is a twin stick arcade shooter that is entirely powered by YOUR music! Just copy some music on to your PS3 hard drive, or use the built-in songs, choose a track, and be dazzled by the eye-bleeding visuals as you blast away at enemy ships to the sound of your favorite pumping tunes.

Everything you see in the game is dictated by the music in some way, from the firepower of your ship to the number and patterns of enemies coming at you. Each track produces a unique (but, most importantly, repeatable) level.

In addition to Standard play, Ultra has plenty of cool gameplay features to keep you busy, including Boss Rush and Survival modes, 23 perks to unlock and 42 in-game challenges that award 14 trophies. There are also three awesome tactical weapons: Micro Missiles, Reflect Shield and Ultra Beam to unlock & upgrade, turning you into a mean music-driven badass.

Beat Hazard Ultra is designed to be a real ‘in yo face’ experience. It doesn’t pull any punches as the visuals pump and pulse to the music. However, you‘ll be glad to know you can turn this down if you need too. But if you’re in the party mood you can turn the visuals up to 200% for the most intense action you can get.

And if you’re feeling like a challenge, you can jump online and play either co-op or head to head. Online play is crazy! Watching two powered-up ships on Suicidal mode with 200% visuals is completely mental.

About me and the Development for PS3

This game was written from scratch by just me, in my bedroom. I started writing games when I was 14 back in the 8-bit days. After graduating from university, I spent 15 years working as a designer and programmer for bigger studios such as D.I.D, Rage Games and, most recently, Juice Games and THQ. Although I enjoyed working with the big guys I always wanted to go back to bedroom coding and working for myself. I got the push I needed to go indie two years ago when I was made redundant. That was when Beat Hazard was born and, due to its success, I’ve not looked back since.

I’ve always been a massive PlayStation fanboy (I even had a Net Yaroze back in the day, anyone remember that?). I was ecstatic when Sony approved Beat Hazard Ultra for release on PSN last year. Once I’d finished jumping around and started to think of the challenge ahead, I suddenly realized I might have bitten off more than I could chew. Attempting to write a console game from scratch is a huge challenge and I knew I had a lot of work ahead.

And a massive challenge it was! However, as with any big project, I just broke it down and took it a day at a time. With the help of the awesome support guys at Sony, six months later here it is – Beat Hazard Ultra running on the PS3! I can’t tell you how rewarding that feels! In that time I’ve learned many new skills, from writing a renderer on the PS3, to coding a Digital Signal Processor which runs asynchronously on the PlayStation SPUs and is used to analyze the music in real time.

I get many emails from budding game designers and programmers asking about going indie. Well here you go – even one guy can write a game for PSN, and it’s all there for you if you have the time and dedication to go for it. I hope Beat Hazard inspires more Indie guys out there.

Beat Hazard Ultra should be out this September. I really hope you enjoy the game. I’ll be hanging out here on the blog to answer any question about Ultra or its development process. You can also email me here, or follow me on Twitter here. Join the Ultra Facebook fan page here or check out my website here.