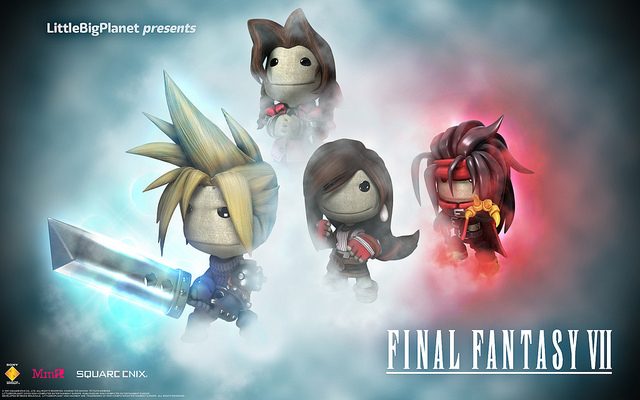 Over the next two months we’ve got some pretty darned cool LittleBigPlanet 2 DLC packs heading your way. I’m sure you’ve noticed the title of this post, so let’s not delay any further – from the depths of Midgar, I’m delighted to unveil…the FINAL FANTASY VII costume pack!

Coming to the PlayStation Store on July 12th, these costumes will let you re-live the struggle of Cloud, Aerith, and the rest of AVALANCHE against Shinra, from one of the most iconic and critically acclaimed video games of all time.

Exciting stuff – but that’s not all. I’m sure lots of you have been enjoying the continuing adventures of Cole McGrath in inFAMOUS 2. Those adventures can now continue even further thanks to the inFAMOUS 2 mini-pack. Released this week for $2.99, it contains costumes for Good Cole and Bad Cole, as well as a whole host of new stickers. Being a hero is optional in inFAMOUS 2, so this will give you a chance to show your true colors!

The next release to keep an eye out for is the Toy Story packs, which were just recently unveiled at E3. With THREE new costume packs containing all of your favorite characters, plus a level pack containing new Toy Story-themed levels to play through. These packs are sure to keep you entertained until the release of the LBP2 PlayStation Move pack. Stay tuned for more details (and pics!) soon.

Lastly, we’d like to let everyone know that MotorStorm Apocalypse content will be coming very soon. We have a pretty packed LBP2 DLC schedule with lots of exciting stuff coming up, but you will not have to wait much longer, I promise. Our apologies for any inconvenience!

Well, that’s it for now, folks – enjoy the downloadable goodness!

Don’t worry, he hasn’t been forgotten. The awesome Sephiroth costume will also be released on July 13th. I won’t tease you all anymore – here’s the full range of FINAL FANTASY VII content that is coming your way…