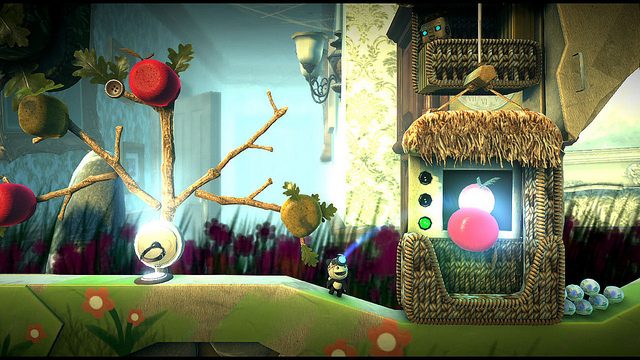 You keen-visioned PlayStation.Blog readers are bound to know that the LittleBigPlanet 2 PlayStation Move DLC was officially announced at the E3 PlayStation press conference (huzzah!). You were no doubt left with questions around what it does, how it works and what marvels will be possible once our army of LBP creators get their hands on it.

In a nutshell, the PlayStation Move Pack lets you create levels with (and for) the PlayStation Move motion controller, and it includes a set of levels built by Media Molecule to make your creative juices juicier. LBP has always been all about communities creating and sharing, so rather than show you our 200-slide marketing presentation, I’ll hand you over to Andrew, AKA Chimpanzee, creator extraordinaire and editor of the splendid Rocket Cheetah, for enlightenment…

Back in May I was lucky enough to be invited to the hallowed grounds of Mm Towers to check out the new LittleBigPlanet 2 features they were working on and hang out with some well-known Creators to see what they could do with them. We all knew that Media Molecule were working on an update to the game, introducing brand new tools which make use of the PlayStation Move motion controller, but what we saw was so much more than LBP 2 with added ‘waggle’.

15 members of the community from as far afield as the USA and France descended on Media Molecule’s Guildford studios and to kick things off we were given a brief demonstration of some of the features of the Move Pack.

Looking back, I suppose I shouldn’t have been surprised by how much was being given to creators – after all, Media Molecule aren’t exactly known for doing things by halves. Aside from features that people are expecting, the Move Pack also includes a wealth of amazing new gadgets and tweaks which Creators have either been asking for forever or don’t even know that they need yet, but will soon wonder how they ever did without.

First up was the Manipulator, a power-up which can be dropped into a level to instantly enable Move gameplay. It works just like other power-ups that you’re already familiar with; It’s equipped when a player walks over it and can be removed with the power-up remover. With the Manipulator, the player aims by pointing the Move motion controller and can pick up, move around and carry grabbable objects using the trigger. It has a set range (similar to that of the grappling hook) indicated by a translucent orb around Sackboy.

The Moveinator is the PlayStation Move’s equivalent of the Controlinator. As well as all the standard buttons, it gives Creators access to all of the Move’s sensors: Gyroscopes for rotation and tilt on all and the accelerometers to detect up. down, left and right movement. Anyone who’s used the Controlinator in their levels will find the Moveinator’s circuit board very familiar. All of the outputs can be wired-up to Mover logic to allow the player to control any object directly.

Combine the Moveinator with the Move Cursor and you’ve got instant point and shoot gameplay. Just plonk one of these new logic chips down on the Moveinator’s circuit board and you’re given a reticule which you can aim with the PlayStation Move. You can customize the pointer to be any sticker you like and you can even tweak a range of options to have it change color or even switch to a completely different graphic when it hovers over specific objects.

To illustrate how some of the new features could be used, we were shown a few of the MM-made levels that’ll be included in the downloadable pack. It’s the largest piece of DLC that Media Molecule have released so far and the variety of gameplay is bound to inspire Creators to come up with even more exciting and original ideas. The main story levels consist mainly of puzzle/platformers where you play using with a DualShock or Sub-controller in one hand and the PlayStation Move in the other – a control scheme that was surprisingly easy to get used to. But the mini games are where I was really blown-away. One was a Labyrinth-style game where you had to tilt the Move to guide a ball through a maze-like track. In another, you had to use the Move Cursor to arrange objects, conveyer belts and bounce pads on a board to guide a dumb Sackbot from one side to the other.

Overwhelmed? I was. But grab a cup of coffee and take a deep breath because we aren’t even nearly done yet!

Next we we shown some of the smaller but equally pleasing new tweaks and tools. Firstly, Media Molecule have been listening and have delivered on a much-requested feature: Multipliers on Score Givers! Huzzah! You can even tweak how often the score is multiplied and by how much. They’ve also introduced Speed and Rotation Sensors which output if and how much an object is moving, which I’m sure will be music to many Creators’ ears. There’s also a new Slicer Tool. This works in a similar way to the Corner Editing Tool but allows you to pick any two points on the edge of a shape and slice it in two – a big time-saver.

Yet another new tool is the Move Recorder – a new logic chip which records the fluid motion of the Move controller. This allows Creators to give realistic, organic behavior to any object and anyone who’s used Sackbots’ “Act” function will instantly recognize how it works.

Just a small thing really, no big deal, it’s just that LittleBigPlanet 2 now has a freakin’ paint studio! The fully-featured Sticker Creator takes you to a whole new interface where the Move controller is your paint brush. Excuse me while I gush here for a moment but it really is no exaggeration to say that the artistic types among you will be able to create fully-fledged masterpieces with this. There’s a selection of brush types, shapes and colors to choose from and you can also change the brushes opacity, allowing you to blend several colors together to get that precise shade that you’re after. You could also take any existing sticker and use it as a brush or stamp. I used it to make a rather lovely ocean of bright yellow rubber ducks but you could of course get a little more creative with it and compose hundreds of different stickers together into something incredible

The paintings you make can then be used as stickers in-game, shared in prize bubbles or exported in high-resolution to the XMB.

With all these awesome new stickers you’ll be making, you’ll want a way to display them in their full glory in your levels. Mm has you covered, yet again, with the new Sticker Panel material. This mysterious new substance is magical; draw out a block of it in Create mode and as soon as you stick a sticker to it, it becomes completely invisible, leaving only the sticker behind. Sticker Panels behave in a similar way to the Hologram material in that it has no physical properties, can pass through other objects and can be stacked on top of one another in the same layer. However, unlike Hologram material, a Sticker Panel doesn’t affect the sticker’s color or opacity… unless you want it to of course.

Phew! That about does it for my ‘brief’ round-up of the LBP 2 Move Game Jam. It was a truly amazing to see some master Creators in action, let loose with some new toys. I really cannot wait to see what the rest of the community does with them.

A huge thank you to Spaff, Tom and everyone at Mm for making it happen and to everyone who was there on the day for letting me tap them on the shoulder every 10 minutes with a curious “Whatcha dooin’?”