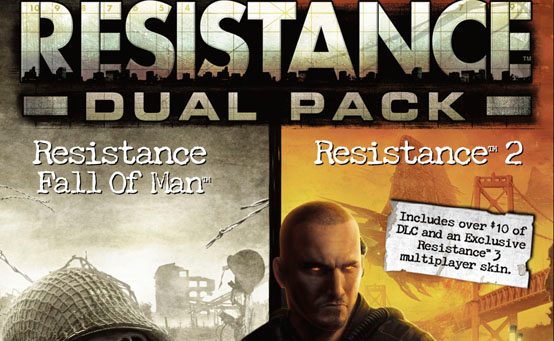 Missed out on the first two Resistance games? Don’t worry, I’m not mad. I’m just here to tell you that soon there will be a way for you to catch up on the war with the Chimera before the epic third chapter, Resistance 3, comes out on September 6th. All the cool kids are doing it. Plus, you’ll get some pretty sweet exclusive bonuses.

Introducing the Resistance Dual Pack! Releasing in the North America this July 5th, you’ll be able to purchase Resistance: Fall of Man and Resistance 2 together in one convenient package – at one convenient price. For only $39.99 (MSRP) you can experience the thrilling journey of Nathan Hale as he fights back the invading alien force known as the Chimera. And it comes just in time for you to be ready for Resistance 3. How could it get any better?

I’ll tell you how it can get better! Bonus content, that’s how! Alongside the first two games you will also receive:

That’s $10 worth of content for free. Or, as I like to think of it: Being able to buy a really big sandwich at lunch – for free!

But settle down, folks. That’s not even the best part. Also included in this bundle is an exclusive multiplayer skin for the upcoming Resistance 3. Take a look for yourself.

Yes, the beanie is back! Exclusive only to this dual pack is a voucher code for the Capelli SRPA skin. So, if you want to dominate your foes in Resistance 3 multiplayer as the gruffer and buffer version of Capelli from the Resistance 2 days, you need to pick up this Dual Pack.

When I said I wasn’t mad at you if you haven’t played the first two Resistance games, I was telling the truth. In fact, I’m ecstatic that you now have the opportunity to play both of these critically acclaimed titles at a great price with great bonus content. Heck, even if you have played the label off of the first two, you could buy it for your friend and get them addicted (You can keep the Capelli Skin for yourself – I won’t tell). So, if you are new to the Resistance universe or want to relive the thrill all over again, you can’t go wrong when you pick up the Resistance Dual Pack. After all, September 6th is right around the corner…