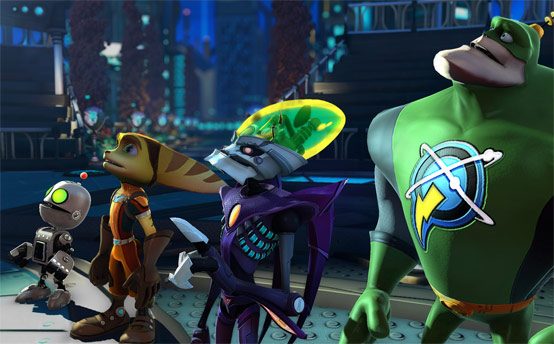 For Gameplay Programmer Mike McManus, the secret to co-op success is CAKE. “It took a long, painful prototyping process to find things that worked, so we came up with a catchy acronym: CAKE.”

Co-op
Active for all players
Kinetic
Easy to understand

“We found that if we can design something that satisfies CAKE, it has a really good chance of being fun before we put any work into it,” McManus told us in a recent demonstration of Ratchet & Clank: All 4 One. “CAKE is key.” All 4 One sees the titular pair and fan-favorite nincompoop Captain Qwark teaming with series baddy Dr. Nefarious in a quest to escape the Creature Collector — an interstellar zoo packed with the galaxy’s most dangerous beasts.

Story-driven four-player co-op campaigns have a decidedly mixed track record. But armed with philosophies such as CAKE and cooperative-friendly weapons, Insomniac Games is taking great pains to ensure that All 4 One is much more than a single-player game with extra players haphazardly tossed into the mix. For starters, All 4 One supports every possible combination of offline and online players. “If you want to play with two people on the couch in Los Angeles, one person in London, and one person in Tokyo, you can,” McManus elaborated. “If you want to play by yourself, we’ll have A.I. characters to play with you.”

What’s more, All 4 One’s arsenal encourages all four players to coordinate their firepower to produce ever-more spectacular effects. Take the Darkstar Fission Rifle, which emits an energy beam that attaches to other Darkstar-wielding players. If all four players use the Darkstar, you’ll carve through enemy legions like a neon shuriken just by moving. “They’re almost like electrical clotheslines,” McManus said with no small amount of satisfaction. The Thundersmack, meanwhile, summons a lightning-spewing storm cloud that grows in power as your teammates contribute with more Thundersmacks. Power it up enough and the storm cloud will vomit tornadoes and torrents of lightning.

That’s not to say that All 4 One will stifle players who’d rather stick to their favorite weapon: The Arc Lasher is one example, as it stuns its victim and multiplies the damage of your teammates’ attacks. “It’s all about figuring out the best weapon to use,” McManus stressed. “You’ll need to approach every battle in a unique way.” McManus is excited to see how players react to the game’s epic action set pieces, such as a series of battles set atop a monstrous mechanized Guardian. “In almost every level we have really big, cinematic co-op experiences…it’s about sitting on the couch or playing online with your friends and experiencing these humongous battles together.“

All 4 One encourages players to work together with an array of co-op-friendly gadgets. The Vac-U tool can suck in a teammate and propel him over a chasm or behind enemy lines; The tether enables the team to link up in a daisy-chain to swing over perilous jumps. Though you’ll need to stick together to succeed, players will compete for kills in order to score more Bolts — the lifeblood of weapon upgrades.

Read on for more highlights of our chat with McManus, and watch the video above to see Ratchet & Clank: All 4 One in action. Leave your questions in the comments!

On character-specific special abilities
“Each character has a distinctive skill that helps out the whole team, and it gets more useful as you level it up. Ratchet’s Doppelbanger creates a lookalike that distracts nearby enemies and frees you up to revive a team mate; when you level it up it also fires at enemies. Clank has a bomb that slows down enemies, and Qwark has a reflective shield that protects the team from projectiles.”

On catching up to Pixar’s visuals
“We’re getting close, but I don’t think we’re quite there. It would presume that the CG in the Pixar films stops getting better. And if you’ve seen their recent movies, they’re looking better than ever. We’re closing the gap a little bit. We’re so happy with how All 4 One looks — it looks even better in 3D.”

On failed co-op experiments
“We had gameplay mechanics where one player would do something and the other three were waiting for them to do it. It was just intensely boring. Waiting around is not a lot of fun.”

On Dr. Nefarious joining the forces of good
“Dr. Nefarious is deliciously evil in this game, he’s as selfish as ever. But he realizes that the only way for him to get out of this situation is to help out Ratchet, Clank and Qwark — as much as he can’t stand them.”