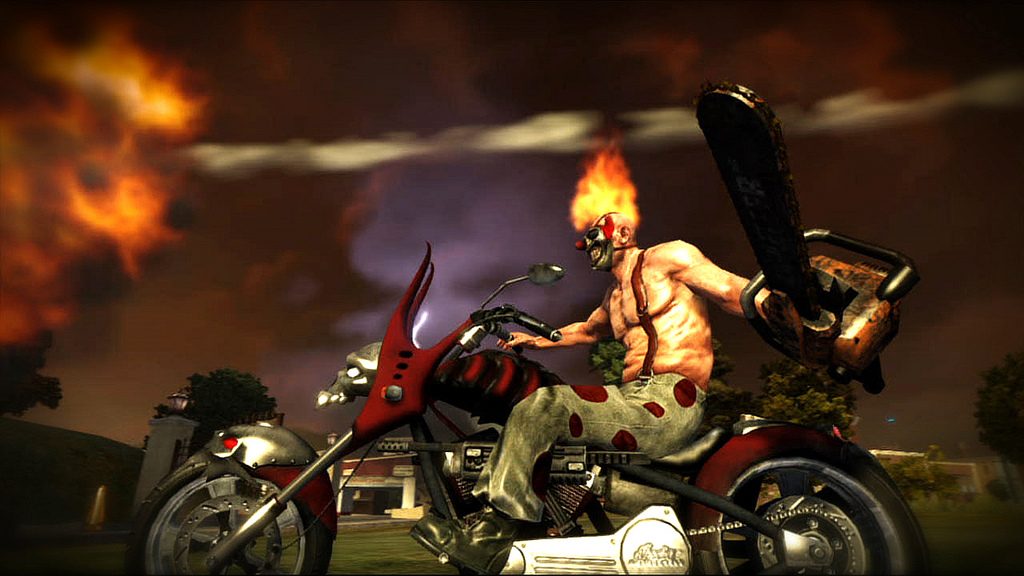 After Twisted Metal made its bombastic debut nearly a year ago at the E3 PlayStation press conference, developer Eat Sleep Play promptly descended into a self-imposed near-silence. Now that Twisted Metal has finally emerged from its shadowy confines — headlights gleaming like accusing eyes, an angry puff of steam boiling from its cracked radiator grille — it’s clear that David Jaffe, Scott Campbell and the boys have been busy. Really busy. Even in its early pre-release state, the PS3 rebirth of PlayStation’s longest-running series plays true to form — it’s fast, ferocious, and fun. Underneath the glistening new HD graphics, blistering frame rate and overhauled combat system lies the vehicular equivalent of Mortal Kombat…that is, if Mortal Kombat included 16-player online battles waged with helicopters and nukes and psychotic clowns driving semi trucks and God knows what else.

Twisted Metal Creative Director David Jaffe is fond of comparing the game’s combat feel to that of fighter jets. The comparison is apt because the vehicle handling and physics are so deliciously exaggerated. This ain’t no GT5; in Twisted Metal, cars turn on a dime and blast from zero to 100 in the blink of an eye. They swoop in for the kill, jousting their quarry with rockets and napalm blasts before the element of surprise is lost and the hunter becomes the hunted. In the midst of a lively multiplayer match, Twisted Metal feels like barely controlled chaos, a symphony of destruction swirling with danger and buzzing with death.

As you might expect, the arsenal has received a hefty upgrade for the game’s PS3 debut. The devastating new Swarmer Missile and Shotgun join returning weapons such as the Homing Missile, Napalm, and Ice Blast. Each vehicle’s special attack also comes with an alternate fire mode that can inflict even more damage if timed correctly, lending the combat an additional layer of depth. For example, Axel can either emit a wide-range shockwave or transform into a grinding, spiked gear to roll over the opposition — what Jaffe described as a “violent Oreo cookie.” Another nod to modernity: You can now freely aim your projectiles with the right analog stick to hit enemies above and below you. Jaffe even dished on a new Sixaxis-centric combat mechanic he’s currently calling the Turbo Ram. “If you have enough turbo, you can shake the controller forward and drill the crap out of an enemy in front of you,” he told me. “It feels almost like an uppercut in a fighting game.” Though the version I played stuck with a classic-style driving control scheme, with gas on the Square button and brake on the X button, Jaffe promised that the final version of the game would include a more modern scheme with gas and brake assigned to the L2 and R2 triggers.

Team coordination is also shaping up to be a major focus for Twisted Metal’s frantic multiplayer gameplay. Talon Helicopters can use their winch to pick up teammates for a better firing angle; Junkyard Dog tow trucks can drop repair kits to heal their teammates; and the mighty Juggernaut semi truck can open its rear door to allow teammates to drive inside, where the drivers can man high-powered turrets and dominate the battlefield. But Jaffe promised that the new tag-team maneuvers are strictly optional, and that crafty players can exploit weaknesses in seemingly unstoppable vehicles. For example, the devastating Juggernaut semi truck can be outmaneuvered and flanked by nimble Reaper motorcycles, riddled with sticky bombs, and blown to pieces.

During our talk, Jaffe kept our conversation firmly squared on Twisted Metal’s online multiplayer offering. But he did provide a rare peak into the game’s secretive single-player campaign, which will grant you one life but enable you to store up to two or three cars in a garage on each level. If you face impending death during the single-player Twisted Metal tournament, you can venture back to your garage and pick a new vehicle…if you can survive the journey.

With its hyperkinetic visual style and blistering land-and-air multiplayer combat, Twisted Metal is shaping up to be a wet, sloppy kiss to fans of the classic games as well as a daring remix of online multiplayer conventions. And with a shiny new release date of October 4th, 2011, Jaffe’s twisted vision is one step closer to becoming reality. Read on for highlights of my full conversation with Jaffe, and leave your burning gameplay questions in the comments.

“Twisted Metal is the final name. The series has been out of the spotlight long enough that naming it ‘Twisted Metal 8’ or whatever would be problematic. You’d have people saying, ‘well, I didn’t play the first seven…’ Calling it Twisted Metal is like planting a flag in the ground and saying that our heartbeat is still strong. The essence of Twisted Metal is still here. To call it anything other than Twisted Metal would feel wrong.”

On Realistic Driving Physics and the Lack Thereof

“Every time we start a new Twisted Metal game, Scott [Campbell] and I talk about doing realistic cars, and it’s a disaster. We’ve never thought of this as a driving game. They happen to look like cars but they’re fighter jets.”

On Creating a Twisted Fantasy

“First and foremost, we imagine the fantasy. A great game designer will tell you that’s stupid, that you should start with your fundamental gameplay mechanics, and he’d be right. That’s just not how we do it. For us, the fantasy has always been to be in a car chase going down the freeway, with semi-trucks flipping and crashing, while I’m in a helicopter holding a sniper rifle shooting a bazooka down, and cars are racing through the explosion. That’s what we start with, and every generation of hardware gets us closer and closer to that vision.”

“Helicopters were about delivering the fantasy first, and then figuring out how to tune it. The helicopter has a lot of access to a level, it’s fast, but it doesn’t have great armor. We balance it with risk and reward..other cars can use the right analog stick to look up and shoot whatever they want. If I’m on the ground and you fly over me, I can launch a Power Missile up at you and take you out in one or two hits because your armor is so weak.”

On the Companion Gunner

“The companion is fantasy. You are the car, just like in every Twisted Metal. You see your driver more, and you see your gunner a lot more. Some [of the gunners] actually tie into the single-player story. We still have weapons that come out of panels and things like that, but we thought it was fun and cinematic for a guy to lean out the window of a sportscar and fire a shotgun. It just feels more relevant and cool and movie-like. The gunner isn’t really a different mechanic, it’s presentation.”

On the Number One Goal for Twisted Metal

“I don’t have a number one goal. I have two goals. On the fiction side, I want people to fall in love with this dark, twisted, weird world as much as we do. On the gameplay side, Twisted Metal is a fighting game combined with a shooter. I want gamers to discover what hardcore Twisted Metal fans have known for a long time — that Twisted Metal is a great pick-up-and-play game, but it has a lot of layers and depth. To us, it’s in the same league as classic multiplayer games that build a community for years and years.”