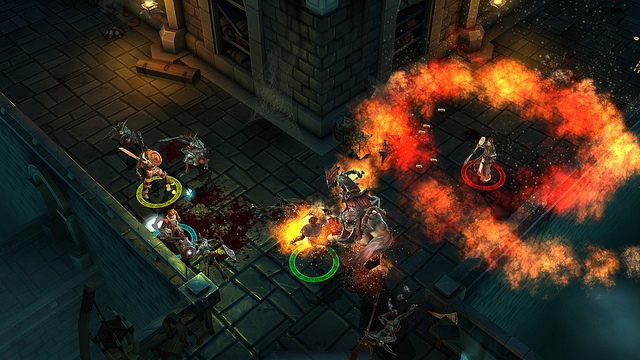 
Hard to believe it’s almost been a year since we unveiled Dungeon Hunter: Alliance at E3, but the wait is finally over. Today, the game is available for download on the PlayStation Network!

In all honesty, we might have been able to release it sooner, but we really wanted to make sure this was a polished game, not just a run-of-the-mill hack ‘n slash. While the storyline is based on the original Dungeon Hunter, we wanted to re-imagine everything else for Alliance. So we rebuilt our game systems, graphics and engine from the ground up for the PlayStation 3.

Just getting the classes balanced to the point we felt every player will be happy filling in a unique role for their party required extensive playtesting. To this end, we included some great abilities to unlock as your character progresses. Each class has a total of seven ability tiers and players unlock a new tier every few levels, so there’s always something to look forward to just around the corner.

You’re going to need all those powers, as monsters in co-op are noticeably beefed up (and drop better loot), so teamwork is important. This creates opportunities for players to complement each other, becoming a party that’s far more powerful than the sum of its heroes. We also have a system that allows players to reset their skills and explore different roles and customization paths.

Though originally we only planned on players using the standard DualShock controllers, we started working on PlayStation Move motion controls in the spring of 2010. Even with a designer working full time on this for nearly half a year, we had to go through many iterations before finding exactly what we wanted: a new and refined experience with the peripheral – not some tacked-on feature.

The PlayStation Move motion controller allows players to experience Dungeon Hunter: Alliance in a somewhat more relaxed and casual manner, which is exactly what we had in mind for it. Even players inexperienced with the classic controller can easily pick up and play using the PlayStation Move. Personally, I love the fact that it allows you to play with a single hand – leaving the other hand free to grab chips or a cold one – but if you prefer, you can always use a DualShock controller instead.

Still, the hardest part of the process has been making a fun, stable and engaging multiplayer mode that lets you switch seamlessly between single player, local multiplayer and online multiplayer, without having to switch your character. After all, the multiplayer experience really is the focus of this game, but we don’t want players to feel like they have to start back at level one when they feel like playing solo. If you feel like having friends over but don’t want to start a new character, the option is there. If you want to play with four players but can only get two real life allies, you can take your game online and invite a distant friend or a random player to join the party. How you play is up to you.

Naturally, we couldn’t include every single feature that came to mind, and player versus player is one such feature. It was tempting to do, but we opted to focus our effort on making the best possible cooperative experience and had no wish to throw in more game modes simply to make the features list longer.

We are very proud to offer PlayStation Network users the type of experience that has been lacking in this current generation of consoles. We hope they have as much fun playing Dungeon Hunter: Alliance as we had making the game.