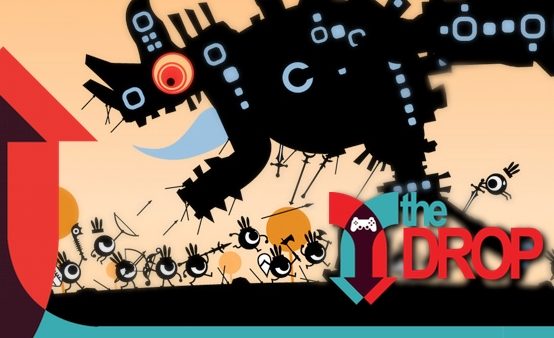 Pata Pata Pata Pon ! Pon Pon Pata Pon ! Chaka Chaka Pata Pon ! (Translation) Aid Hatapon in his quest to free the Patapon tribe from their stone prisons and rescue them from the seven evil spirits in Patapon 3, one of the PSP’s most anticipated and unique games of the year.

The rest of the line-up for The Drop this week, has you moon-walking, bird flinging and templar assassinating on the PS Move, PS3 and PSN.

Patapon 3 (Also on PSN) — The brave Patapon tribe cross the recently constructed bridge at the end of Patapon 2. A mysterious box lies in their path and they combine their efforts to break it open. They successfully break open the box to release… the seven evil spirits! All the Patapons are turned to stone except for Hatapon. He has escaped the tragedy and finds a silver Hoshipon at the bottom of the box which gives him a new power to defeat the evil spirits: Superhero Patapon.

Patapon 3 introduces this new Superhero Patapon, which players can use to head into musical battle, devastating opponents with deadly, rhythmic attacks. Players will go on multiplayer Quest with friends or go head-to-head on an epic four-against-four battle against other Patapon clans with network play (up to eight players). Patapon is a fully customizable experience, with different weapons and abilities that combine music and dance to create the only multiplayer portable adventure full of rhythm and war.

Michael Jackson: The Experience — He is the legendary King of Pop! In this game, players step into the shoes of Michael Jackson himself and re-live his most iconic performances through their own singing and dancing. The game includes the most famous tracks from Michael Jackson’s extensive catalog such as Beat It and Billie Jean, as well as an array of his awe-inspiring dance moves for players to learn and emulate within the game. Additionally, fans can sing along and test their vocal skills while immersed in the performance.

Rio — Birds of a feather party together in this party adventure based on the hit animated movie Rio! In this multiplayer video game, Blu goes on the adventure of his life, with the help of his female counterpart, Jewel, and a group of wise-cracking and smooth-talking city birds. Blu and his new friends journey through Rio, dodging soccer balls, collecting tropical fruits and soaring across the beach. He participates in amazing games and ultimately, forms a conga line and dances his way to first place at the Carnaval ceremony.

Assassins Creed — The setting is 1191 AD. The Third Crusade is tearing the Holy Land apart. You, Altair, intend to stop

thehostilities by suppressing both sides of the conflict. You are an Assassin, a warrior shrouded in secrecy and feared for yourruthlessness. Your actions can throw your immediate environment into chaos, and your existence will shape events during this pivotal moment in history.

Might and Magic: Clash of Heroes — Clash of Heroes is a puzzle RPG in the Might and Magic franchise. Utilizing an innovative and dynamic combat system based on puzzle mechanics, players explore highly detailed maps full of knights, elves, wizards, necromancers and demons and interact with a unique hand-drawn environment. Scattered across five different regions of Ashan, 5 special heroes must travel their own dangerous paths to grow in strength, unravel a demonic plot, and ultimately save the world from Chaos.

3D Twist & Match — Developed by Sanuk Games Twist and Match is a 3D puzzle game that challenges your dexterity and imagination. You are tasked with rotating 3D objects to match their shaded silhouettes.