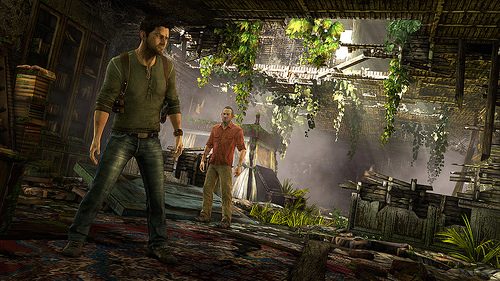 In case you haven’t seen my video interviews with Insomniac Games and thatgamecompany, I was at the PlayStation Experience press event in London last week, talking about the most anticipated PlayStation games of 2011.

Uncharted 3: Drake’s Deception will be right at the top of that list for many fans and I got the chance to sit with Arne Meyer, Community Strategist at Naughty Dog. After half an hour of idle chatter about ice hockey and London’s historic markets, we got on to the game and discussed what Naughty Dog is doing to ensure Drake’s third adventure is the most immersive yet.

To kick things off, which Uncharted 3 level are you showing here today?

We’re showing an extended version of a stage called The Chateau – you may have seen footage of it in the Internet, but what we have here today shows off some of the technical things we’ve been working on, new character interactions and a few gameplay mechanics that people haven’t seen before.

We’ve also brought the 3D trailer that was only previously seen at the Consumer Electronics Show (CES) in January.

Care to elaborate on those new gameplay mechanics?

I think that the key ones are the new melee options and an expanded repertoire of stealth movement, one of which sees Drake jump from above for a stealth kill. I’m personally excited about the new brawling moves, which let you take on many enemies at once and use the environment, whether that’s grabbing a chair, slamming an enemy into a wall or even removing their gun and dispatching them that way.

We’ve also taken a look at the traversal gameplay and made some improvements there, many of which are physics based, so objects react more realistically when Drake climbs on top of them. A lot of the work we’re doing is on animation, so that there’s more realism when you start running from standing, for example. Essentially, we’re adding more steps to each character animation so that it blends better when you switch from one routine to another.

Everything we do is aimed at blurring the line between the game and reality, and making the player believe in this world.

Do you do all of your motion capture in the studio?

We have two motion capture captures – a smaller one in the studio that let’s us pick up smaller pieces, like idols, and then we have a dedicated stage at Sony Studios, and that’s where we get both the motion capture and the audio – because we do all of the dialogue at the same time – for both gameplay and cinematics.

It’s big enough for us to set up and perform everything from rehearsals to the final performances, and that approach, which is basically the same as producing a major motion picture, is what makes the performances so fluid and realistic in our games. When we’re in full swing, we’re doing new motion capture every week.

The actors you work with always seem so generous with their time, whether that’s rehearsing or appearing at ComicCon, more so than other game actors?

We truly feel that they are part of the studio and they come down a lot on their own. Between working with them solidly for such a long period of time, and giving them input into what their characters are and should be, it’s a lot more collaborative and totally in the spirit of how Naughty Dog operates.

They feel invested in Uncharted, and it’s really appreciated when they take the time out to come along with us to events. They’re popular around the studio and we generally just like having them around.

Uncharted had water and jungle, Uncharted 2 had snow and ice. Which element are you working to perfect with Uncharted 3?

We’re always on the lookout for new technical challenges and we’re really happy with what we’re achieving with our fire effects. It’s not just a static asset – the fire deteriorates the wood realistically and there are blowback effects, like you would expect. The smoke is looking much better this time around.

If the fire is eating away at the wood in the chateau, will it burn to the ground if you take too long?

You could sit down and watch the chateau burn around you, if you sit there long enough; however, we want the player to proceed through the game at a decent pace so that’s not going to happen. Even in this demo, you can see beams deteriorating as they burn, and you can even take cover behind them when they give way and fall to the floor, only for that cover to disappear when the beam has burned away completely.

Procedural fire is a pretty difficult technical challenge, especially on top of everything else you’re trying to get in the game, but it produces some brilliant effects, like the corners of the wallpaper starting to roll and then igniting, and then the embers flickering in the air. Essentially, we’re programming oxygen and then having the fire follow it around the environment.

I caught a glimpse of a wad of £20s in the teaser trailer we released at the end of last year. Does this mean Drake is coming our way?