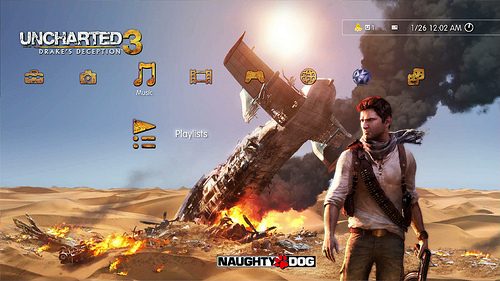 Late, late last night, the PlayStation Store published a special update that was chock full of UNCHARTED 3: Drake’s Deception content! Below is a rundown of everything that went up. Go grab it NOW – well, if you like the content that is.

We’ve also got an UNCHARTED 3 PS3 Static Theme you can get for FREE – just head over to the UNCHARTED 3: Drake’s Deception Official Game Site and register for updates. Once you’ve registered, you’ll get an e-mail with a PSN voucher code you can redeem for the PS3 Static Theme.

We haven’t forgotten about UNCHARTED 2 yet either – we’ve put together a special sale of ALL UNCHARTED 2 multiplayer DLC bundles which will run for 3 weeks only! Call it a little holiday treat for our multiplayer community.

A few weeks ago we informally discussed with our community regarding putting up DLC that was previously offered as exclusive pre-order items, such as the Golden Guns. There were many, varied opinions and good points on all sides of the argument. Based on that forum thread, and other conversations elsewhere on the same topic, we’re glad to announce that we’ve made the previously exclusive Golden Guns multiplayer DLC available to everyone on the PSN Store for a mere $1.99! If you’re outside of the US, be sure to check your local PSN Store for exact pricing in your region.

Back to UNCHARTED 3 for a minute to close out this blog post… we’ve got a special treat for our community and UNCHARTED fans – below you’ll find a universal PSN voucher code that all our North American fans can redeem to get a limited-time-only UNCHARTED 3: Drake’s Deception logo PSN Avatar, shown above! But act quickly: Once this voucher is tapped out, it’s gone forever.

We hope you enjoy this veritable cornucopia of UNCHARTED 2 and UNCHARTED 3 goodies on PSN!