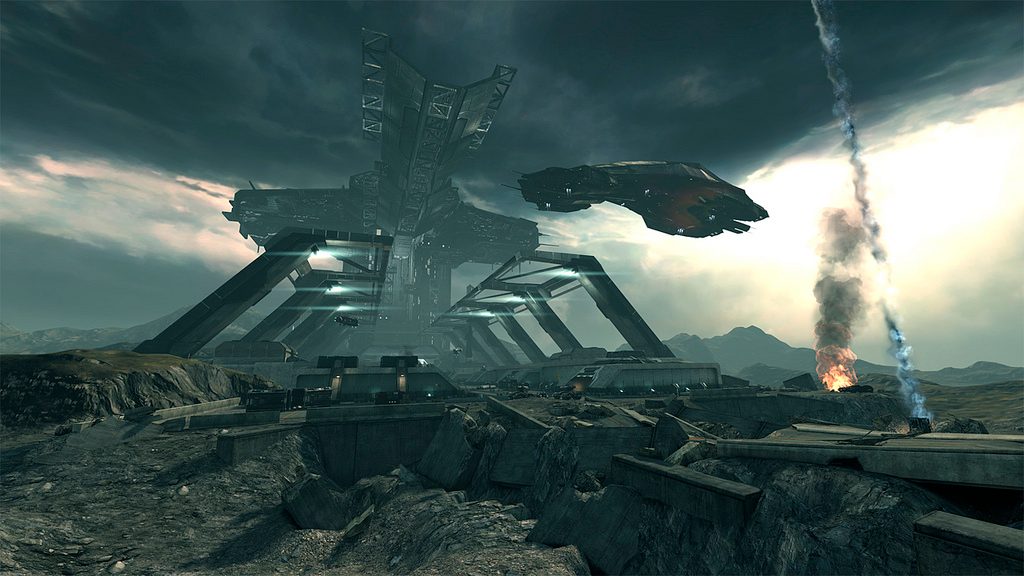 DUST 514 is a PS3 MMOFPS coming to PS3 with large-scale vehicle and infantry combat taking place in – and with a real time connection to – the EVE Online universe on PC. Players are able to band up into corporations (e.g. guilds) and wage territorial conquest on thousands of planets. Following is a thematic description of Rapid Deployment Vehicles, or RDVs. The RDVs deliver vehicles to players on the battlefield, provided that they own the vehicle’s blueprint, and are skilled for its operation. The RDVs are AI driven, with a robust pathfinding system that allows them to deploy anywhere on even the largest battlefields. (We will give more insight into the game’s vehicle mechanics in a blog post soon.)

Shrouded in advanced optical stealth and guided by automated networked navigation systems, the J42 “Sky Lift” RDV (Rapid Deployment Vehicle) drone is able to deliver even the heaviest armor, with pinpoint accuracy, anywhere on the battlefield. The proliferation of this invaluable tech has changed the face of ground warfare in the EVE universe, giving front-line commanders the ability to strike enemy positions with little warning or reinforce vulnerable points at a moment’s notice.

Originally designed for industrial transportation by Outer Ring Excavations (ORE), the Sky Lift was repurposed for combat missions with a few key alterations. Firstly, the engines underwent a massive upgrade, from aftermarket conventional jet turbines to the latest F/4 Ionized Plasma Forges. The extra thrust they provide compensates for the increased weight of the fuselage, which is augmented with 25mm radar absorbing armor plates. Without crew, the cockpit area has been redesigned with Tech 2 drone hardware, a multi-spectrum geospatial avionics system, and a state-of-the-art Phantom-65 stealth field controller.

One key feature that was completely unchanged, however, is the “Magnetar” lift system. This retractable electromagnetic crane is powered by the Sky Lift’s main reactor but also has an integrated backup capacitor for especially heavy loads. It generates a magnetic field so powerful that most of the vehicle’s EM shielding is in place to protect against the side effects of the lift system, rather than enemy electronic attacks.