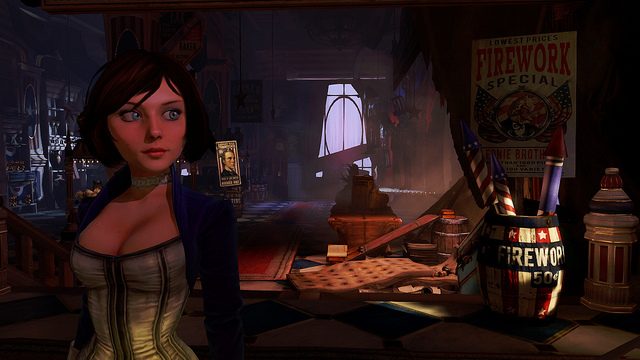 It’s always a pleasure to speak with Ken Levine, creative director for the award-winnging BioShock and the upcoming dystopian epic BioShock Infinite. Ken’s been good enough to drop by the PlayStation.Blog before, bringing news of PlayStation Move support as well as an upcoming PS Vita BioShock game, but we’ve never been able to immortalize him in crisp HD video.

Until now. In Rey‘s lovingly produced video feature, Levine touches on the origins of Songbird, the enigmatic guardian of Columbia who jealously seeks ownership of a supernaturally gifted girl named Elizabeth. “There’s a lot of mystery around Songbird, and I think people will be surprised by his relationship with Elizabeth — it’s a complicated relationship that has elements of light and elements of darkness.” He also muses on the PlayStation Move motion controller and Killzone 3‘s much-praised FPS implementation, as well as PS3 gaming as a whole. “I think the platform is really hitting its stride right now,” he told me. “The exclusives have been great and it’s been a really interesting platform to watch develop.”

PlayStation.Blog: How is work proceeding with the PS3 version of BioShock Infinite?

Ken Levine, President and Creative Director, Irrational Games: Look, I’m not blowing smoke here. We were Xbox-exclusive for the original game, and now we have something to demonstrate to the PlayStation 3 audience. We love the platform. I have three PS3s at my house. It’s a great game system and I love the kinds of games that are coming out on PSN.

The PS3 has a different architecture than we had encountered before, but because we helped port BioShock to the PS3, we’ve become very familiar with the platform. And we have a new engine for BioShock Infinite, so we started the game knowing we’d be on PS3. We started thinking about how to leverage the multiple cores from the start, so we’re in a much better place this time on PS3.

PSB: Are you working anything into BioShock Infinite that you wanted to include in the original game but couldn’t?

So now we have these traditional BioShock spaces, but also big, expansive areas where enemies are hundreds of yards away. You’re fighting one guy, or 15 guys, so crowd control becomes meaningful. Long-range weapons like sniper rifles become very meaningful.

PSB: What’s been the most challenging aspect of creating BioShock Infinite?

Levine:With this game we got behind this idea of building this relationship between Booker and Elizabeth. We’re really focused on a relationship that is earned, a relationship that is believable. Our focus is, what forms a bond between two people? Making sacrifices for each other — that will build a relationship very quickly. Not just, “these two people are drawn together because they’re attractive.” The same way that in BioShock, I didn’t want Atlas to betray the character so much as the gamer. When Andrew Ryan tells you that you’ve been manipulated the whole time, you think, “Screw you, man!” In the same way, I want the player to build this relationship with Elizabeth in BioShock Infinite. That’s the challenge of what we’re doing.

PSB: Replayability is a major concern for single-player-focused games. Have you been thinking about ways to encourage replay, maybe a New Game Plus mode? Is that up for debate?

Levine: I’ll just say that yes, we do think a lot about this topic. I can’t talk about what we’re thinking specifically. If we’re going to do it, we want to find a BioShock way to do it. People will see more as time goes on.

PSB: Are you intrigued about any gaming applications for stereoscopic 3D?

Levine: For me, it’s all about having something interesting to say with it. I’m never interested in technology in terms of checking a box. We didn’t do multiplayer for BioShock because we thought we would be checking a box if we did. Anything we do has to be unique, interesting, and be appropriate for the game.

So we’re thinking about that stuff now. So if we have that, then that’s a road we may go down.

PSB: What’s your secret for building mystique and mystery in a game like BioShock Infinite?

Levine: I think it’s an issue of detail, of the creators not being satisfied until they really understand their worlds, which takes time to develop. Some creators carry these things in their heads for a long time, or have had a lot of time to make a lot of mistakes.

It’s about consistency, having a consistent aesthetic. It’s difficult. It requires that you not be satisfied with any old thing. It’s the difference between some guy making a crappy action film versus the Coen brothers. They care about the details, they care about the consistency from frame to frame. Each Coen brothers movie feels like a full world. Look at A Serious Man versus True Grit versus Miller’s Crossing. They’re such different worlds, but they’re so rich. There’s no magic formula: It comes down to sweating all the details.

PSB: Based on your Tweets, you’re pretty positive on PS Vita. What do you like about the concept?

Levine: I’m a gamer, right? I like playing games on iPad… but deep down I want that level of control. What’s cool about PS Vita is that it seems to have all the benefits of an iPad-type device with the touchscreen and motion controls. But it has dual analog sticks….and I love shooters. You can finally play a shooter, a real shooter, on a handheld. Seriously, that’s a hole in my soul right now. Now I’ll have something I can play real shooters on, and that’s really important to me. It’s awesome.

I Tweeted a while ago that it did everything but make me an omelet. It sort of has everything and the kitchen sink in it, which is great as a gamer.

PSB: Andrew Ryan thought free enterprise was the solution to the world’s problems; the citizens of Columbia seem to think it’s purity. What does Ken Levine think?

Levine: [laughs] I don’t like to say what I think. It would just get in the way of what the games are saying. I love that some people play BioShock and think that I’m an Objectivist, or that I’m a rabid anti-capitalist. I don’t really Tweet much about politics, not because I don’t have opinions but because we make games that touch on politics.

If you’ve played the games, I think you can probably suss where I’m at. We tend to make games about characters caught between larger forces. They’re just trying to get by, and they’re surrounded by ideologies and incredibly powerful people. I think a lot of people feel that way. I sure do. I have strong feelings about this or that…but the only thing, politically, that I come out about is gay marriage, which I feel so strongly about. People should be able to marry who the hell they want, and it affects so many people that I care about. I’d rather not have a career than not talk about that.

In general, I get very nervous when people are absolutely certain about anything.

PSB: Are you looking forward to UNCHARTED 3? Are you a fan of the series?

Levine: Yeah, of course! How can you not be an UNCHARTED fan? They’ve managed to make characters that are so appealing, you just love being around them. There aren’t a lot of interesting characters in video games, and that’s why Amy and Evan and their team are so good at what they do. The technology is so competent, the controls feel responsive, the characters are great…how can you not love UNCHARTED?