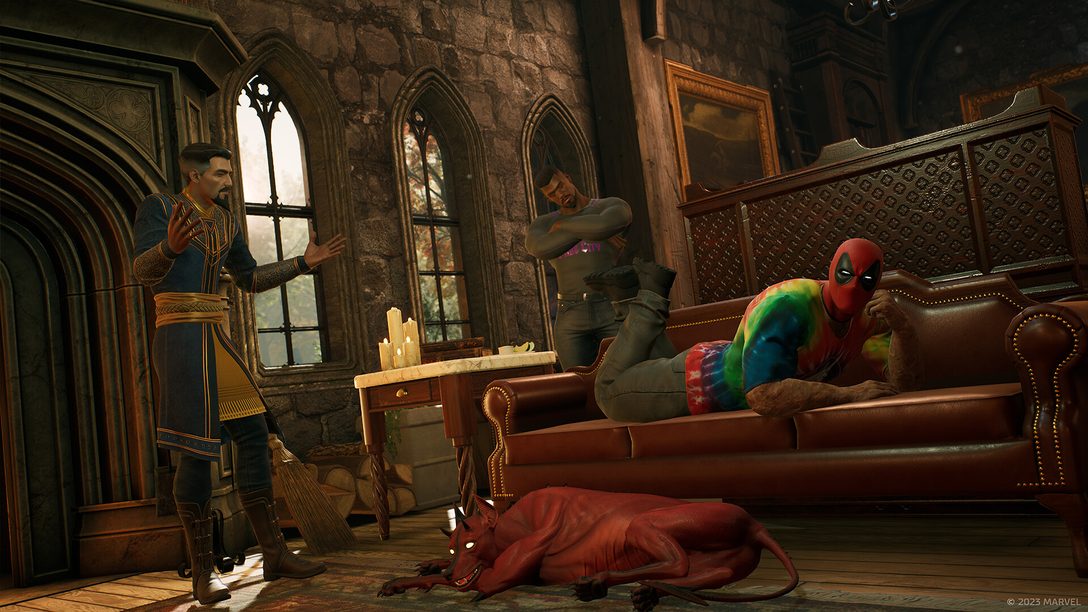 Combat perks, story missions and a whole lot of Turduckens.

We’re now just one sleep away from the January 26 release of the first Marvel’s Midnight Sun’s DLC*. You’re likely already aware that “The Good, the Bad, and the Undead” adds Deadpool to the Midnight Suns roster of playable Marvel heroes**, but did you know that it also tells the story of how and why the Merc with a Mouth joined the team? Did you know that he employs a unique En Fuego resource on the battlefield, or that his food truck is parked right outside the Abbey? Read on for more details!

Deadpool has his own Story missions

Deadpool joins the Midnight Suns after crossing paths with the Hunter (and Hydra forces, and vampyres, and Red Skull’s granddaughter Sin) while attempting to stealthily liberate an artifact from the NYC Museum of Art. The story of this botched burglary and subsequent confrontations with vampiric enemies plays out across a series of new missions in which Deadpool, fully aware that he’s appearing in a video game, takes things considerably less seriously than his new allies.

“You should expect Deadpool to regularly break the fourth wall, both in and out of combat,” shares Creative Director Jake Solomon. “It’s like playing the game with a mouthy but lovable friend.”

It’s worth noting that while Deadpool’s storyline is separate from the main campaign, you can include him when assembling a team for any mission once he joins the hero roster. And you should, not only because his wisecracks are brilliantly voiced by Nolan North, but also because…

Deadpool can deal SO much damage!

Deadpool’s unique En Fuego resource has the potential to make him increasingly powerful as a mission progresses. Many of his ability cards incorporate the En Fuego keyword and, providing he has at least one stack of En Fuego, these cards are more powerful and/or have additional effects when played.

“If you can maximize Deadpool’s En Fuego bonus, he becomes a ‘one man Delete key’ for enemies,” says Jake. “Watch him draw an absurd amount of cards, shoot five enemies, and then absolutely destroy the biggest, baddest enemy on the map. All in one turn.”

Deadpool’s En Fuego meter is fueled by KOing enemies using his ability cards, granting him an additional stack of En Fuego after earning a number of KOs. However, Deadpool will lose a stack of En Fuego anytime he takes damage. So, while Deadpool’s innate ability to self-heal a percentage of his health each turn means he doesn’t require a babysitter, teaming up with a tanky hero like Captain Marvel or Captain America who can Taunt enemies away from him helps to maximize his damage output.

When Deadpool joins the Midnight Suns, the team’s secret Abbey base is upgraded to accommodate his flashy Food Truck in a spot by the pool. Emblazoned with a colorful picture of the man himself astride a bearded unicorn, the truck advertises the “World’s Best Turduckens” but actually delivers something far more useful, if not quite as tasty.

“With Deadpool’s Food Truck upgrade you can discard a card from your hand once per encounter to gain a Move,” explains Jake. “This is a huge boon for positioning and using the environment during tactical missions, and Deadpool doesn’t need to be on the mission for your team to use it!”

Furthermore, if you upgrade the Food Truck you’ll gain a Shove as well as a Move when you discard a card, so you can push an enemy towards danger while backing your heroes away from it.

There’s more to Deadpool than violence and cooking

Like other Midnight Suns heroes, Deadpool can be found relaxing in and around the Abbey between missions, and if you’d like to pursue his friendship you can invite him to hang out. Just know that, because of his unstable and unpredictable nature, Deadpool doesn’t merely “like” any hangout activities; he either “loves” or “dislikes” any way that you spend time together!

Does Deadpool strike you as someone who’d enjoy playing video games, or do you think he’d prefer to lounge by the pool? Movie watching or bird watching? Invite him to activities that he enjoys and, once your friendship level with him maxes out, you can unlock his Legendary Midnight Suns ability and suit.

Deadpool’s arrival at the Abbey also affords an opportunity to conduct additional research with Tony Stark and Doctor Strange at the Abbey’s forge. Deadpool has pitched an idea for “basically an energy drink combined with a portable defibrillator” that, once researched, manifests as the new Effort Maximizer combat item that you can take into tactical missions. This Legendary-rarity item has the power to duplicate all of the cards in your hand for a selected hero while discarding all other heroes’ cards.

**Characters may require unlocking through gameplay.