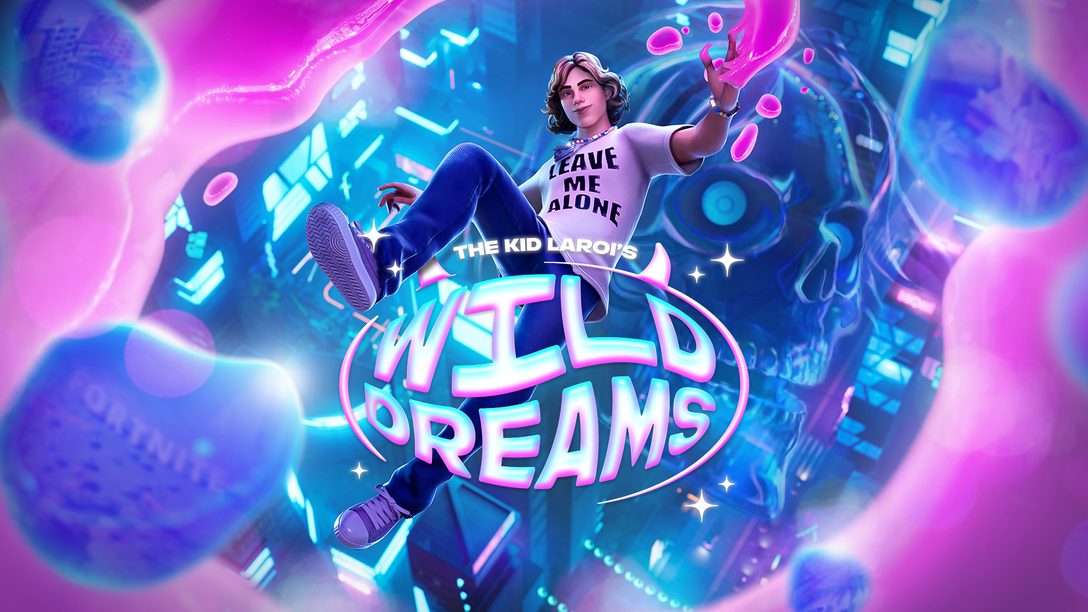 Fortnite welcomes The Kid Laroi to the Icon Series.

Sony Music artist The Kid Laroi, Australian rapper, singer, and songwriter has become a global force to be reckoned with since his ascent in 2019. His bangers and dramatic beats are coming to Fortnite starting January 27 at 3PM PT — in The Kid Laroi’s Wild Dreams. This immersive sonic experience will portray Laroi’s journey from humble beginnings to headlining sold-out performances, as well as becoming a worldwide superstar.

New music from Laroi will be featured in The Kid Laroi’s Wild Dreams, including his upcoming song “Love Again” being released on Friday, January 27. “Love Again” isn’t the only new song featured in the experience, as three unreleased songs will also play in both this experience and the Afterparty experience.

Dress harmoniously for The Kid Laroi’s Wild Dreams with The Kid Laroi and The Rogue Laroi Outfits, available before the experience goes live. Both Outfits will be available in the Fortnite Item Shop beginning January 26.

Additionally, on January 24, players can compete in The Kid Laroi Cup for an opportunity to unlock these Outfits early, plus a special Banner Icon and Emoticon

The Kid Laroi’s Wild Dreams will have you venturing in the cybercity “Laroitown,” where you’ll ultimately attend a jam-packed Laroi concert featuring fan-favorite music and new music. After the performance, join Laroi in the Afterparty experience. Here, you can listen to the Wild Dreams mix on loop while getting a look inside the tour life, and beyond, of Laroi.

Complete The Kid Laroi’s Wild Dreams Quests (during both experiences!) to earn XP and special Laroi items, such as the Love Again and Thousand Miles Lobby Tracks, Laroi & The Rogue Loading Screen, and the Laroi Was Here and Laroi’s Tag Sprays. These Quests will be live from January 27 at 3 PM PT to 3PM PT on February 3, 2023.

To get to the experience, select The Kid Laroi’s Wild Dreams tile on the Discover screen, or input the island code 2601-0606-9081. Either option will take you to the island where the experience takes place, made by creators Alliance Studios, Team Atomic, and TheBoyDilly, and features a video directed by Adrien Wagner and produced by La Pac.

Also in an island made by Alliance Studios, Team Atomic, and TheBoyDilly, the Afterparty experience will be available from January 27 at 3 PM PT to April 27 at 3PM PT. Join by selecting the The Kid Laroi’s Wild Dreams Afterparty tile on the Discover screen or by inputting the island code 4294-0410-6136.

Want to dress for the occasion? Starting January 26 at 4 PM PT, the Kid Laroi and The Rogue Laroi Outfits (plus more items) will be available in the Fortnite Item Shop.

The Kid Laroi Outfit and Back Bling

From dreamer to hitmaker.

Work your way to the top with The Kid Laroi Outfit. This Outfit has the Electrified Style in addition to its default Style. Included with the Outfit is the Get My Bag Back Bling, which has the blue default Style and pink Left Alone Style.

The Rogue Laroi Outfit, Back Bling/Pickaxe, and Wrap

From hitmaker to hunter.

Eliminate opponents on the battlefield with The Rogue Laroi Outfit, which has the Electrified Style in addition to its default Style. This Outfit comes with the Tragic Blade Back Bling. Unsheathe the Tragic BLADE as a Pickaxe! Also coming to the shop, the Laroi Free Style Wrap matches the Outfit too.

Keep the party going even after the Afterparty with these Item Shop items:

The Stay Afloat Emote, Heart of a King Emote, and Stay Lobby Track can be purchased individually or via the Laroi’s Party Starter Bundle, which additionally includes the Wild Dreams Loading Screen:

Keep your head in the clouds.

Battle to the Top in The Kid Laroi Cup

Be as fearless as Laroi in The Kid Laroi Cup. Compete in this Duos Zero Build tournament on January 24 for the opportunity to be among the top point-earning players in your region, unlocking The Kid Laroi Outfit (+ Get My Bag Back Bling) and The Rogue Laroi Outfit (+ Tragic Blade Back Bling/Pickaxe) early. Also, earn at least eight points to unlock a Laroi Banner Icon and the Laroi’s Smile Emoticon.

Competitors can play up to ten matches within their region’s approximately three-hour time window, and the specific event timing for each region can be found in the Compete tab in-game.

See you when the party starts in Fortnite on January 27.