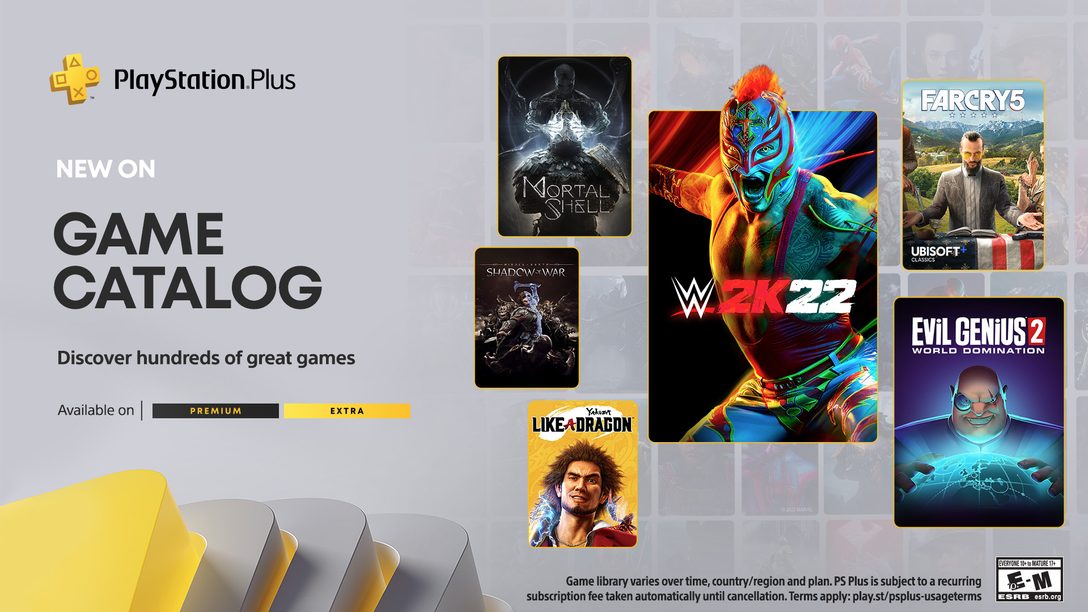 Also added this month: Yakuza 6: The Song of Life, The Pedestrian.

Today we’re happy to reveal the December Game Catalog lineup for PlayStation Plus. All but WWE 2K22 will be available starting December 20. Let’s dive in.

WWE 2K returns with a redesigned gameplay engine and new controls. Play solo or against friends locally or online as the biggest and most realistic-looking WWE Superstars and Legends. Take on not one, but two MyRise single player adventures, featuring unique male & female storylines that let you choose your journey like never before. Call the shots as a WWE General Manager and take the reins of Raw, SmackDown, NXT or NXT UK and draft your ultimate roster,  then compete against rival GM’s to build the biggest brand in the WWE Universe.

WWE 2K22 will be available to PlayStation Plus Extra and Premium members on January 3.

Welcome to Hope County, Montana, land of the free and the brave but also home to a fanatical doomsday cult known as Eden’s Gate. Stand up to cult leader Joseph Seed, and his siblings, the Heralds, to spark the fires of resistance and liberate the besieged community. Build your character and free Hope County in solo or two-player co-op, taking control of iconic muscle cars, ATV’s, planes and a lot more to engage the cult forces in epic fights.

Take up arms on your own or with a friend in two player co-op in a transformed vibrant post apocalyptic Hope County, Montana, 17 years after a global nuclear catastrophe. Join fellow survivors and lead the fight against the dangerous new threat the Highwaymen, and their ruthless leaders The Twins, as they seek to take over the last remaining resources. Recruit Specialists to upgrade your homebase, who will help unlock all new features including crafting weapons, gear and more, then venture on Expeditions to memorable locations across the USA.

Conquer an innovative open world with breathtaking environments and unpredictable savage encounters as the Far Cry series travels back to the Stone Age. Play as Takkar, a seasoned hunter and the last surviving member of your group. There is one goal: survive in a world where you are the prey. Explore a new chaotic time period filled with unpredictable mayhem, dangerous threats, and incredible stories.

Mortal Shell is a ruthless and deep action-RPG that tests your sanity and resilience in a shattered world. As the remains of humanity wither and rot, zealous foes fester in the ruins. They spare no mercy, with survival demanding superior awareness, precision, and instincts. Track down hidden sanctums of devout followers and discover your true purpose.

From the team that brought you the critically-acclaimed Yakuza series, play as Takayuki Yagami, disgraced attorney turned private detective as he claws his way through Kamurocho’s underground crime network to investigate a string of grisly murders in this psychological thriller. Track suspects, discover clues, and bring evidence to court. Take advantage of two unique battle styles to take down adversaries in electrifying encounters.

Fight through Mordor and uncover the truth of the spirit that compels you in this third person action adventure that chronicles a new chapter in the Middle-earth saga. Discover the origins of the Rings of Power, build your legend and ultimately confront the evil of Sauron.

Go behind enemy lines to forge your army, conquer Fortresses and dominate Mordor from within. Experience how the award winning Nemesis System creates unique personal stories with every enemy and follower, and confront the full power of the Dark Lord Sauron and his Ringwraiths in this epic new story of Middle-earth.

In this delightful and unique puzzler, enjoy a textless journey, where all ideas are shared in icons and your powers of observation will be put to the test. Rearrange and reconnect public signs in order to explore and advance through each engaging environment.

Take control of an Evil Genius and set their plans for world domination in motion a satirical spy-fi lair builder. When it feels this good to be bad, the Forces of Justice don’t stand a chance! Build your own unique evil lair and construct wonderfully wicked devices. Train a force of criminal minions, recruit powerful Henchmen and defend your Lair from the Forces of Justice, and dominate the world by carrying out evil schemes and building a Doomsday Device.

Ahoy! The Land of Ooo is underwater and it’s up to Finn and Jake to find out why. Join our heroes as they explore the high seas, search for hidden clues and interrogate shady suspects. Upgrade your heroes, use items, spells, potions and unique ultimate hero abilities to battle bad guys in fast-paced tactical combat and solve the mystery to save this waterlogged world!

Put on the Omnitrix and transform into Ben 10’s incredible aliens as you adventure and battle through an action-packed 3D world to stop a master magician’s Hex-tremely fiendish plans. Take on some of the deadliest enemies Ben has ever faced in thrilling combat. Solve fun puzzles, use your skills to help out the townspeople you meet, and collect power-ups to upgrade your aliens. You can even team up for some fun local drop-in, drop-out cooperative play.

Explore and race across the prehistoric world of Gigantosaurus. This Disney dino tale is part saving the world, part super race, and all giant fun in this videogame tie-in to the animated TV series is part-platformer, part racer. Play alone or with a friend, exploring and solving puzzles… then taking part in a fast-paced super rally to the finish line and the next zone.

Featuring an enormous open world, a massive cast of characters, and a story you can play your way, the Ultimate Edition of this award-winning single player RPG from the masters at Obsidian Entertainment includes all major updates and expansions. The god Eothas awakened from his sleep, erupting from beneath your castle, killing your people and stealing a piece of your soul. Now only you and your companions can uncover the rogue god’s machinations as he tramples over the Deadfire Archipelago.

With a gorgeous, hand-drawn 2D look, brand new weapons, the introduction of crafting, vehicles and buildings plus the return of some much-loved classic weapons and gameplay, Worms W.M.D is the best worms experience ever. Work your way through 30 campaign levels of increasing difficulty using the huge arsenal of new and classic weapons at your disposal, then take on up to five opponents in hilarious all-out tactical worm warfare with up to eight worms each, either in local or online multiplayer, including ranked play.

It’s time to bust out of the toughest prisons in the world as you return to the life of an inmate in The Escapists 2. As the prisons get tougher you’re going to have to get more creative with your escape plans. There’s a ton of options to tackle almost any prison escape. Why not unite with up to 3 friends to create the ultimate escape crew and engineer the wildest escapes yet? Jump online or gather round on a couch to prepare for your sneaky adventures.

Ninja Theory’s third-person action adventure spins a dramatic tale of revenge as Nariko embarks on a quest for vengeance against an invading King and his army. Time is against her however, as the ancient Heavenly Sword she wields to fulfill her mission not only grants her multiple attack options, it also is slowly draining her lifeforce. Take on increasing hordes of enemies, mastering combos and different combat stances to battle your way to victory.

Abe returns in this follow up to the original Oddworld. Abe’s peaceful retirement is shattered when visited by a vision from the Mudokon Spirit Guides, learning that the Magog Cartel is mining Necrum, the sacred Mudokon city of the dead, to collect bones to make a super-addictive SoulStorm Brew. This version has been enhanced with up-rendering, rewind, quick save, and custom video filters.

Enjoy some frantic ball flippin’ fun with addictive gameplay, simple controls and pinball tables to best your highscores on. Each table is based on a different PlayStation franchise like Uncharted and Hot Shots Golf. Keep your ball in play and activate all of a table’s special features. This version has been enhanced with up-rendering, rewind, quick save, and custom video filters.