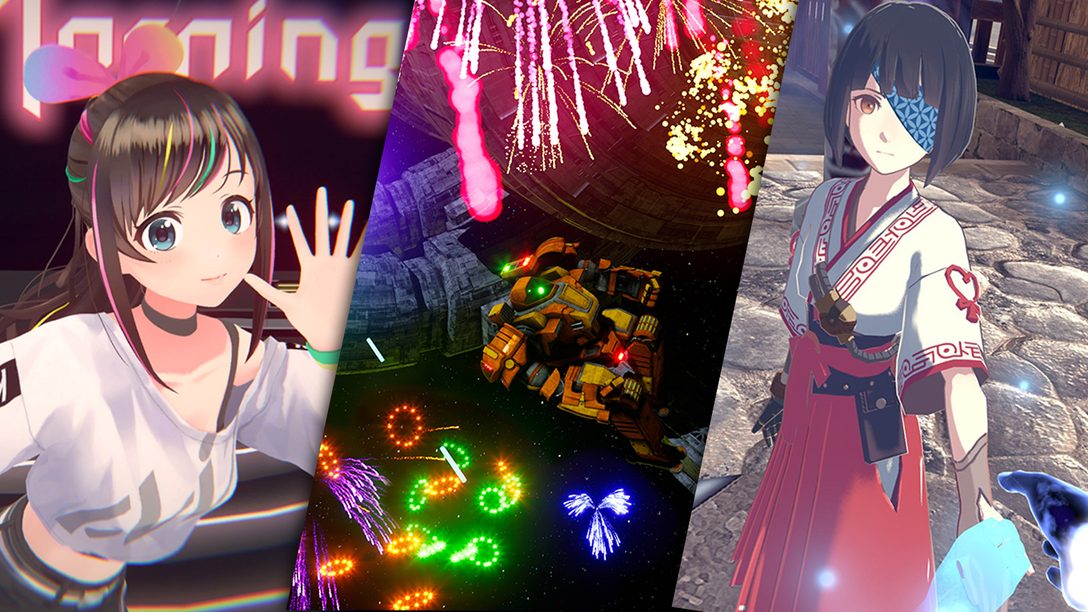 Today, we’re happy to highlight six titles that are coming to PS VR2, which will bring multiplayer combat, rhythm-based celebrations, mystical-style team ups and a murder mystery to players. Without further ado, let’s kick things off with the reveal of Fantavision 202X.

Originally released on the PlayStation 2 in 2000, Fantavision is a puzzle game based on the theme of fireworks. The game returns in an all-new title for PS VR2 powered by the Unreal Engine. The game is an artistic combination of action, shooting, strategy, and puzzles. The PS VR2 headset and PS VR2 Sense controller provides an immersive experience for you to fill the star-studded sky with sparkling fireworks. With its simple yet addictive gameplay, it won’t take long for you to master the controls.

In addition to the single-player mode, a replay mode is also available. You can change the camera’s viewpoint for incredible replays, stop time to enjoy the show, add different effects, and more. You can also experience the vibrations of the fireworks through haptic feedback, so you can fully absorb the breathtaking fireworks display.

Multiplayer sword-fighting action comes to PS VR2 in the form of Altair Breaker. The AI-created virtual world Altair was once a beautiful archipelago covered by a sea of clouds. Now, surrounded by its collapsed brethren, a single floating island remains. Atop its ruins roam experimental combat AI ruled over by a fully autonomous weapon Laws-Zero. Into this place of danger you must journey and face these vicious creations up close.

You are not ill-equipped, nor alone. Team up with up to three other players to tackle these killing machines together and explore the world. Glide through the air and climb walls as you wander the island, then enter into battle using full 360 degree movement as well as leveraging vertical spaces to your advantage. Perform aerial combos, AOE attacks, use special abilities and more. Parry or block strikes with your shield, then slice your opponents in half with a perfectly timed sword swing.

Amata K.K, creator of the escape adventure Last Labyrinth returns with a new intriguing co-op tale. A VR player finds themselves thrust into an all-too real parallel world where danger and mystery await. You’ll join forces with Hal, a shrine maiden who lives on the island of Onogoro. She’s not alone on the island: five giant, lethal Kami inhabit this isle as well. These raging beasts must be subdued, puzzles must be solved and Arakida Masatake, the mastermind behind the mayhem, stopped.

Teaming up is essential to your success. While you hold the legendary Celestial Weapon, capable of manipulating objects and firing Ki once absorbed, some riddles can only be solved by Hal, some only by you. Additionally you share health with Hal, making it all the more important for both of you to avoid injury. In tough situations though, you can hold hands with Hal to heal, so be sure not to miss Hal’s call for help.

Cheer along to 15 popular songs by virtual YouTuber Kizuna AI in this rhythm game that’s playable on PS VR2 (and PS VR). You’ve also the option to enjoy a flatscreen experience on PS5 and PS4, playable with a DualSense controller or DualShock 4 controller respectively. Use your PS VR2 Sense controllers (or PS Move controllers on PS VR) like penlights to strike colored boxes in time with Kizuna AI’s on-stage performance, or use the View Mode to freely move around the stage.

A variety of additional DLC is planned for release after the game’s release, including additional songs, additional costumes, the singing-specific AI #kzn (Kizuna-chan), and the implementation of #kzn-chan songs.

This VR investigation game offers an immersive cinematic experience and an epic story from MyDearest, creators of Tokyo Chronos and Altdeus: Beyond Chronos for PS VR. It takes place far in the future in Astrum Close, a maritime city with a crime rate of 0.001%. In this “paradise” city, where all crimes are prevented by “dreams,” the murder of the city’s founder, Professor Rumford, occurs in an incident that never should have happened. Hal Scion, who has been appointed as the Special Supervisor, is requested by the city to investigate this unusual situation. Why was the Professor killed? What is happening in this beautiful city? A clock tower that has not moved for 12 years has now started again. When the final bell rings, seven days will be all that remain.

Playing as Hal, your main goal is to solve the case. The investigation will be conducted using Memory Dive, an ability that allows the player to access the past by touching objects with the left hand and reliving the owner’s memories. The present can also be altered by interfering with the owner’s actions at the moment their fate diverges. A helpful ally who supports the investigation is Lily, the navigator robot, who is always with Hal and can provide unexpected clues. When you get stuck in your investigation, you can always rely on Lily, who never leaves your side.

In addition to the scene of the crime, the investigation field also includes the beautiful Augmented Dreaming world that integrates people’s dreams, which can be seen when accessing the network. One of the key features of this game is that you can enjoy VR spaces with completely different atmospheres: the real world where the incident occurred and the world of Augmented Dreaming, where mental peace is maintained. Investigate the two-faceted field and get to the bottom of the mysterious incident.

A digital cataclysm of unknown origin has suddenly rebooted the worlds of various action games into nothingness. In the aftermath, heroes of these worlds are drawn together and forced to compete to try and obtain a game engine that’ll restore their home. Team up in intense 5v5 battles in this multiplayer tactical shooter. Each match is set across multiple three minute rounds, with an attacking group attempting to place and detonate explosives, while the defending force attempts to block their efforts. Each hero comes equipped with a distinct weapon and trio of special abilities, activated through specific gestures performed with the PS VR2 Sense controller. Coordinating your combined skills is key to success. More game modes are planned in future updates, and X8 will support crossplay.