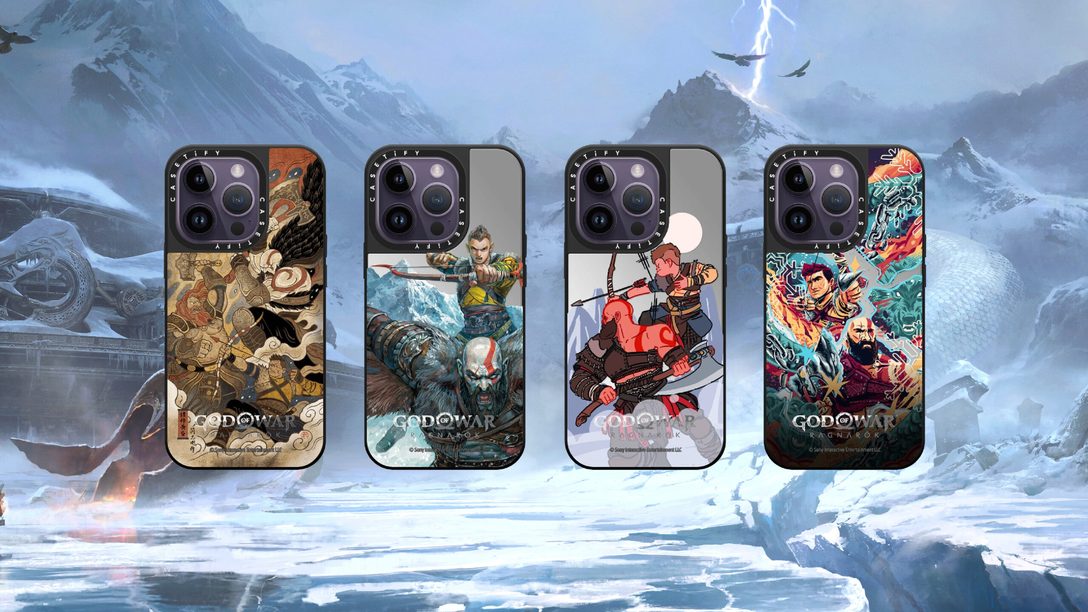 Hello, again! A few days ago, we shared the details on the wearable collaboration products, in conjunction with the launch of God of War Ragnarök.

For those of you who would love to add some toughness and protection to their smart phones, global popular lifestyle accessories brand CASETiFY will launch God of War Ragnarök capsule collections of smart phone cases (select models).

The collection features illustration and design from Asia-based illustrators who have done prominent works, such as day-to-day webcomic, traditional-inspired artwork, graffiti style, and blockbuster comic series.

Lee Kyu Young (aka Gyung Studio on Instagram) is a South Korean artist who’s famous for illustrations depicting the day-to-day lives of his partner, two cats and his love of basketball.

“This collaboration project is unique and challenging for me as I had never worked on video-game related illustration before. Moreover, God of War’s theme is very different from my own drawing style and theme.

As I’ve researched for stories and references from God of War (2018) game, the relationship between the father and son came to my attention first, and I thought it was more like a family story, which is relatable to everyone. As a result, I thought it would be nice to highlight Kratos and Atreus relationship by drawing the two of them in my own light-hearted style as they are preparing to battle together against their adversities.”

Chien Chih Kang is an ink artist, antique restorer, transmedia artist, and popular character designer. His works have the beauty of oriental culture, including ink painting, calligraphy, ancient murals, ukiyo-e and other elements. Though his work incorporates contemporary pop figures, his art often has a strong traditional Asian art feel to it.

“For this God of War Ragnarök collaboration, I presented the main characters in the style of ukiyo-e or traditional Japanese frescoes, depicting dramatic duel of Kratos and Atreus against Thor with the background of Fimbulwinter snow, as imprinted in my work.”

James Khoo Fuk-lung is a popular and iconic Hong Kong comic artist and illustrator, has joined the comic profession in 1978. His notable publications include The Lawless(鐵將縱橫), Dragon Lord(龍神), Amazing Weapons 4(神兵4), The 8th Copper Man in Shaolin(少林寺第八銅人), Kung Fu(功夫), Kill The King(刺•皇) and many more, which has created a significant influence to a generation of artists in Asia region.

James’ drawing style was heavily influenced and inspired by American comics and Japanese manga artists. His work was representational in style and color, also meticulously detailed, His design offered an extensive insight into the background through unique and incredible visual elements.

“As a gamer myself, I have played games on PlayStation consoles for leisure while sometimes my gaming experience did inspire me for my comic creation. This is the first time I created artwork for characters from video games, so I am very excited and challenged by this collaboration.

As I’ve learned more about God of War (2018) and God of War Ragnarök, I decided to set the artwork theme to represent the solidarity between Kratos and Atreus in combat, as well as the unity power of Father and Son, reflected in drawing with my comic visual style.”

Jappy Agoncillo is a Muralist and Illustrator from Manila, the Philippines. His works are an amalgamation of various interests and experiences, resulting in pieces that are heavily layered, rich with vibrant color and detail, and eager to tell a story. He has worked with international fashion, films, technology and lifestyle brands, along with having works in New York, Los Angeles, and Mumbai.

“The artwork is heavily inspired by the myths that gave rise to not only the recent God of War games, but its predecessors as well. I wanted a piece that was packed full of easter eggs and story details, just as rich as the storytelling is from ancient Greek and Norse Mythology. I used the myths as a basis for the elements included, like Jormungandr wrapping itself around the artwork just as the myths suggest it wraps itself around the world, Skoll and Hati teasing the beginning of Ragnarok, the flames of Muspelheim and the ice of Fimbulwinter – a call to how the Norse world began and how it will eventually end. What I wanted for the artwork is not only to showcase the growth and relationship of our main protagonists, but also where they come from, what they’ve been through, and what lies ahead.

CASETiFY x God of War Ragnarök collection drops on 4pm HKT, 9 November 2022, exclusively on https://www.casetify.com/co-lab/god-of-war-ragnarok (shipping worldwide) and all CASETiFY STUDiO stores in Hong Kong. Don’t wait till Thor wakes you up from your nap, these phone cases will sell out as quickly as lightning.