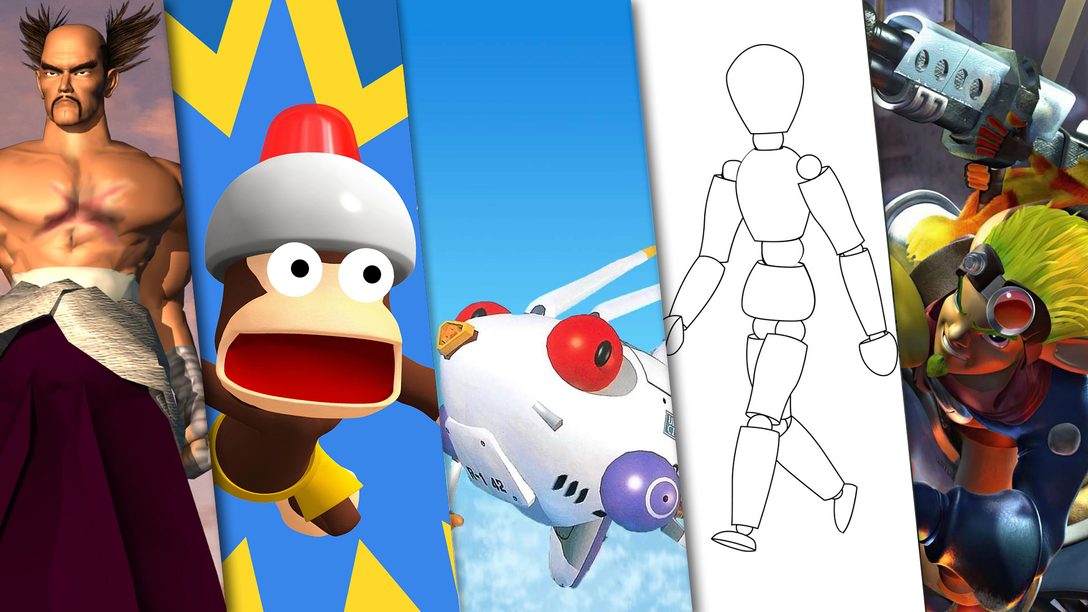 The head of PlayStation Indies shares stories about his personal history with each title.

On PlayStation Plus Deluxe, you may be stuck for choice. Enter Shuhei Yoshida. The head of PlayStation Indies is here to share his own personal picks from the collection, encompassing every era of PlayStation, from unique platformers to enthralling fantasy adventures, and shares his memories of those titles when they originally launched. But we’ll open the floor to Yoshida-san.

We are happy that users who have joined the community from PS5 and PS4 can play the masterpieces from the past, and I think the creators are happy too. I think this is a great opportunity to introduce the history of PlayStation to a generation that was not yet born when the first PlayStation was released, so please enjoy the Classics Catalog.”

Released in 1995 at the dawn of the PlayStation era, this unique 3D platformer was played from a first-person perspective as players controlled the rabbit-shaped machine Robbit. You must use its signature three-step jump to reclaim a world that was stolen by the evil scientist Baron Aloha. This early title showcased the potential of 3D.

“This was one of the first titles to be produced for the PlayStation. Even before the hardware was completed, young game directors like Kazunori Yamauchi-san and Tetsuji Yamamoto-san were assigned to the PlayStation project and started planning the software. It was during this time that Yamamoto-san brought a short movie to me. It was an experimental video called “Jumping” by Osamu Tezuka-san. Jumping up high, over trees, over buildings, and coming down with a whoosh. Inspired by this video where the viewpoint dynamically changes, Jumping Flash was born!

Jump up to a high place and jump down at once while looking down at the ground. The novel gameplay and unprecedented sense of pleasure it offered was one answer to the question at the time, “What can a 3D game do?” Moreover, it incorporates cute characters named MuuMuus to give it a pop finish. I was impressed by Yamamoto-san’s skills as a producer, and I think it is a game that represents the early days of the PlayStation, and is still a fun game to play today.”

Joint development of system boards helped bring popular arcade games to PlayStation. One notable entry was fighting game Tekken 2, which made the leap from arcade to PlayStation in 1996. Select from a 25 character-strong roster to battle through single player Arcade Mode, drop into Practice Mode to perfect your favorite fighter’s move set, take on endless enemies one after another in Survival Mode and challenge another player to Team Battle Mode.

“Before we launched the original PlayStation, we went around asking game developers to make games for us. However, back then it was considered that 3D graphics could not be used for anything other than shooting and racing games, and early negotiations did not go very well. But then Virtua Fighter appeared in arcades, and the tables were turned. We started getting a lot of calls saying, ‘We want to make 3D games too’.

We thought that the ability to play popular arcade games on the PlayStation would be a major selling point. At the time, Namco was making its own system boards for arcades, but they required advanced technology and were costly. Former Namco and Sony Computer Entertainment (current Bandai Namco Entertainment and Sony Interactive Entertainment) decided to jointly develop a system board that would have upward compatibility with the PlayStation. This made it possible to port games that had become popular in arcades to the console in a short period of time. The first such game was Tekken. The sequel, Tekken 2, was the showcase game using 3D graphics at the time. The storyline revolving around the Mishima Zaibatsu and the unique characters were fascinating and they still leave a strong impression on me today.”

The very first PlayStation controller didn’t have analog sticks or vibration feedback. That changed with the launch of the DualShock controller (named due to the two motors housed inside) in 1997 and the first PlayStation exclusive to use it launched in 1999. Ape Escape’s unique concept of using the left and right sticks to catch running monkeys became a hit, with the game’s Gotcha gadgets (called Gacha Mecha in Japan) and the simian-like escapees (called Piposaru in Japan) became very popular. 13 additional games in the series would release in the years after.

“This game was produced by SCE WWS Japan Studio with myself as the producer. At the time, 3D action games were just starting to be released, with games that let you run around freely in a 3D space, climb to high places, and get behind objects. We wanted to try our hands at a 3D action game, so we started planning Ape Escape.

During the development of the game the DualShock controller was conceived, so we decided to plunge into the direction of “making a game that cannot be played with conventional controllers.” However, since it was a new experiment, we could not tell if it would be fun or not until we made it! So we kept creating and discarding prototypes. I spent a long time working on it, so I was very happy when it appeared on the cover of a magazine.”

This sequel to Jak and Daxter: The Precursor Legacy launched in 2003. Unlike the light-hearted action adventure of the previous game, the open world Jak II takes a darker turn as our hero is captured and infused with Dark Eco by Baron Praxis, granting him the ability to turn into a stronger, more agile version of himself. Coupled with the new multipurpose firearm, the Morph Gun, he joins an underground resistance to fight back against Praxis. This shift to a more nature, character-focused game set the groundwork for developer Naughty Dog’s future titles.

“Naughty Dog, the creators of Crash Bandicoot on the original PlayStation, developed Jak and Daxter for PS2. Crash Bandicoot was a level-based platformer with a linear approach to its gameplay design, with loading screens between each level. However, Jak and Daxter was made so that all stages were seamlessly connected, and the next stage would load in the background while the players were playing. It was a very ambitious work and received high praise.

When Grand Theft Auto III was released in North America in 2001, it sent tremors through the video game industry. The game depicted an adult world where anything was possible, including criminal activity, in a realistically rendered city, and the tide of video games changed dramatically. In line with this, Jak and Daxter, which had been for everyone, underwent a major change of course. Naughty Dog changed the appearance of the characters, made it a darker story about revenge, and allowed the players to roam freely in a large city. Normally you don’t change the tone this much in a sequel, but Naughty Dog was amazing for doing so. This was a major departure, and it led to Uncharted for PS3. It’s an interesting title to learn more about Naughty Dog’s history.”

This unique PSP puzzle game built by Japan Studio, originally launched in 2008, is based on the theme of optical illusions. Players can rotate the deceptive world to guide an ever-moving mannequin figure towards the safety of an end goal. Rotating the stage joins up previously unconnected paths, hides obstructive pitfalls, and makes walls that were seemingly impossible to climb over viable. The game was chosen as Japan Media Arts Festival Recommended Work in Entertainment Division at Japan Media Arts Festival.

“It’s a very impactful title, like art turned into a game. The vivid black and white visuals are very cool. The original idea came from a free software ‘OLE Coordinate System’ by Jun Fujiki, a researcher of art engineering. We created this puzzle game based on a video of a character walking all the way through a monochrome world that resembles Escher’s deceptive pictures. Echochrome II for PS3 which was released later, was a game exclusively for PlayStation Move in which the motion controller was used as a flashlight. This game was also highly artistic and won the Excellence Award in the Entertainment Division at Japan Media Arts Festival.”

Instead of portraying the dungeon-conquering hero, you play the God of Destruction, dungeon master intent on stopping – by any means necessary – any adventurer that strays into your kingdom. This fantasy-themed management sim released on PSP in 2010 and in addition to the “Main Dungeon”, the game also features “Everyday Dungeon” mode, where players clear the missions one after another within a time limit, and multiplayer mode, “Family Dungeon”.

“What makes the series interesting is that the player cannot defeat enemies through actions. The player, the God of Destruction, can only dig into the ground. This is how the game is played; building dungeons, creating various monsters, and intercepting the invading heroes. However, the monsters are AI-driven, so they do not grow as you would like. AI gave players the challenge that things don’t always go as planned and the unpredictability of things working out unexpectedly, which made it interesting and fun in its own way. The worldbuilding was also unique, going against the conventional RPG stereotype.

In addition to that, the series is popular for its fun jokes. It incorporates many stories and parodies that poke fun at famous RPGs, and you can’t help but laugh at them. The third title says “3D” (in Japanese version) but it doesn’t have 3D graphics (laughs). The title was given because “there are 3 Dungeons,” but such a joke of a title can be forgiven in this series, can’t it? As the series progresses, the weight of comedy has increased.”

If you want to know more about PlayStation Plus Deluxe, head here.