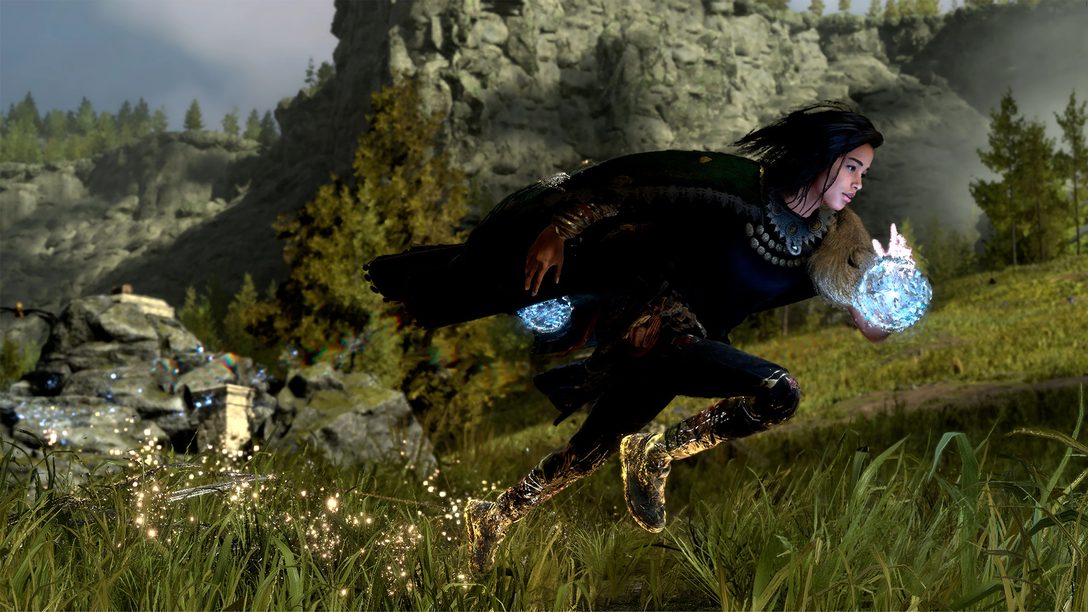 Getting around in Forspoken is as spectacular as it is enjoyable with the help of some amazing magic-enhanced parkour moves.

When Frey Holland is transported to the mysterious land of Athia, one thing quickly becomes clear: this isn’t just her new home. It’s her playground.

The hero of Forspoken is capable of amazing magic-enhanced parkour, which lets her jump, flip, zip and leap around the world with astonishing fluidity. You can get a close-up look at how it all works in our new parkour deep-dive:

So, what exactly was Frey doing in this video? Read on and we’ll tell you a little more about the parkour skills at her disposal – and how she can use them.

This is one of Frey’s core powers – and the beating heart of the parkour in Forspoken.

It’s activated by holding down the circle button – when in this state, Frey will dash through the world with stunning speed and amazing grace. She’ll automatically leap over small rocks and ledges, jump up small walls and do everything she can to keep pushing forward in the direction you tell her.

Of course, there are limits. Using Flow alone won’t let Frey scale a cliff face or climb up a tall building – plus it requires stamina. To really get around with style, you need to combine Flow with Frey’s other moves, and learn how to chain them together.

Think of it as the foundations of a system that puts you in control of traversal, rather than the game doing it all for you. The better you play, the better you move – and the cooler Frey looks.

The Rush ability lets you Flow even faster by working in well-timed button presses.

As you use Flow, you will occasionally see flames briefly emanating from Frey. Press the circle button upon seeing this visual prompt, and she’ll burst forward keeping up her fastest pace. Even better, it also lets you keep up top speeds while restoring some stamina.

It’s a good example of how Forspoken’s parkour system is simple to learn but has a real sense of mastery. Someone new to the game can get around fine with the basic Flow, but skilled players who work in Rush can go further and faster, for much longer.

Want to get your speed up fast? Time to Shimmy.

This move lets Frey kick off the ground to accelerate. Press X at the right time and Frey will perform a short leap forward. If you press X again when she lands, you can continue to dash forward at amazing speeds.

It’s also great because it’s another move that conserves stamina. Many skills draw on this resource, and when it runs out, so does Frey’s current run. Sometimes taking a well-timed breather is helpful as her stamina will recharge quickly when Frey is not using an ability.

This is why skills like Shimmy and Rush are so useful. Because they don’t consume stamina, they let you extend a run far beyond what you’d normally be able to. The better you play, the longer you can keep your flow going… and the more awesome you feel!

Flow can get you some of the way up a wall but to get higher, you need to learn to Scale.

This ability lets Frey create phantom footholds to launch herself into the air. You can use this to give yourself the boost you need to reach the top of a structure or launch off to keep moving seamlessly through the world.

Having this extra jump available is great, but do you know what would be truly awesome? Having an extra extra jump. Speaking of which…

Soar lets you climb even higher by doing multiple leaps in quick succession.

As the name implies, Soar enables Frey to reach incredible heights that are unattainable with a normal jump – that extra height is a real game-changer, letting you reach areas that would otherwise be inaccessible, and opening up even more opportunities for flamboyant parkour.

Okay, so maybe it’s not the flashiest skill in Frey’s repertoire, but it’s one that you’ll wonder how you ever lived without!

Zip though – now that is flashy!

By pressing the square button, you can make Frey launch a magical tether, which pulls her towards anything it connects with. It’s useful for keeping you pushing ahead in situations where you’d otherwise fall short of a ledge, or to bypass scenery that could otherwise slow your forward momentum.

Alternatively, you can hold square to slow the action and target areas that you specifically want to pull yourself towards. While Zip can latch onto any wall, it really comes into its own when you target certain objects found around the world. These let Frey swing forward at incredible speeds or launch herself high up into the air!

You’ve Flowed, Scaled, Soared and Zipped your way up high, but you need to get down in a hurry – what do you do? Use Float of course!

This endlessly useful ability lets Frey manipulate gravity itself to soften any fall. Simply hold the X button in the air, and you can gently drift downwards at a controlled speed.

Of course, the applications go well beyond mere survival – it’s also fantastic in general traversal situations. Float lets you effortlessly bridge large gaps – want to get to the other side of a ravine, or leap from building to building? In many cases, you can simply glide over to where you want to be.

Just be careful – you’ll still be descending slowly, so when going over long distances, it’s best to combine with other parkour abilities like Zip.

Water slows you down, blocks your path and often contains many-teethed monstrosities eager to use you as a chew toy. In other words, it’s the enemy of parkour.

Unless you have the Glide ability, of course.

You’ve probably seen this one in the trailers. It lets Frey skim across the surface of the water. If Frey has learned the ability, it automatically activates when you use Flow in the splashy stuff – simply hold Circle to start surfing.

The speed and style at which you can travel makes every lake, river and sea an opportunity for stylish showboating. it’s particularly useful when fighting some of those aforementioned moist monsters – with this ability you can run rings around them. Or, more accurately, Glide rings around them.

Forspoken is one of those games where the act of movement itself is enormous fun. Traversal isn’t just about getting from A – B, it’s about getting there with skill and style.

It’s up to you to discover how to combine these different magical abilities to achieve that feeling of ‘flowing’ through the world, and when you do it’s enormously satisfying, and endlessly enjoyable.

You’ll be able to discover it for yourselves when Forspoken launches on January 24, 2023 for PS5. Learn more at PS Store.