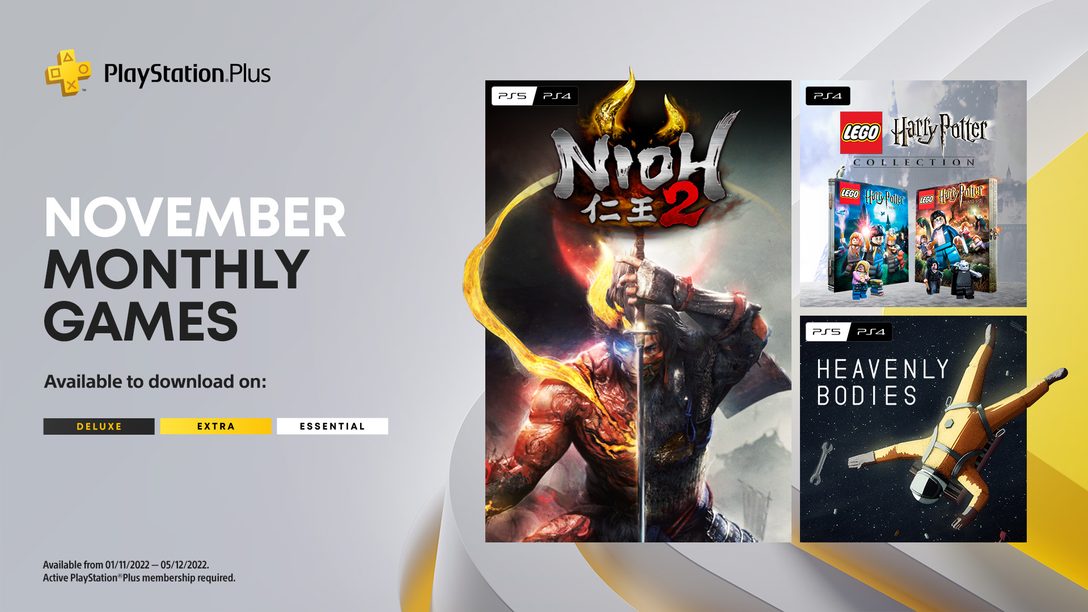 All available on November 1.

Today we’re happy to reveal November’s Monthly Games for PlayStation Plus. Take on savage foes with traditional weapons and supernatural abilities in Nioh 2, cast spells and solve puzzles in Lego Harry Potter Collection and take to the stars for physics sim Heavenly Bodies.

Let’s take a closer look at each of the Monthly Games.

Master the lethal arts of the samurai as a mysterious half-human, half-supernatural Yokai warrior, in this challenging single player action RPG sequel. Take down a host of deadly new Yokai, seasoned samurai warriors and gargantuan boss monsters in Team Ninja’s stylized vision of Japan’s early Sengoku period. Unsheathe your deadly weapons and cut down all enemies in your path using a revamped combat system and the ability to transform into a full Yokai to unleash devastating paranormal powers.

PlayStation Plus members can add both Nioh 2 on PS4 and Nioh 2 Remastered to their game library.

Discover the ever-changing nuances of weightless motion in this challenging physics game, featuring a collection of stellar scenarios inspired by the feats of space explorers and researchers throughout history. Wrangle control of your cosmonaut’s arms with the left and right thumbsticks to push, pull, and clamber through fully physically simulated scenarios aboard a scientific research station, alone or with a friend via local co-op.

PlayStation Plus members have until Monday October 31 to add Hot Wheels Unleashed, Injustice 2, Superhot, Rogue Explorer and Crisis Wing to their game library.