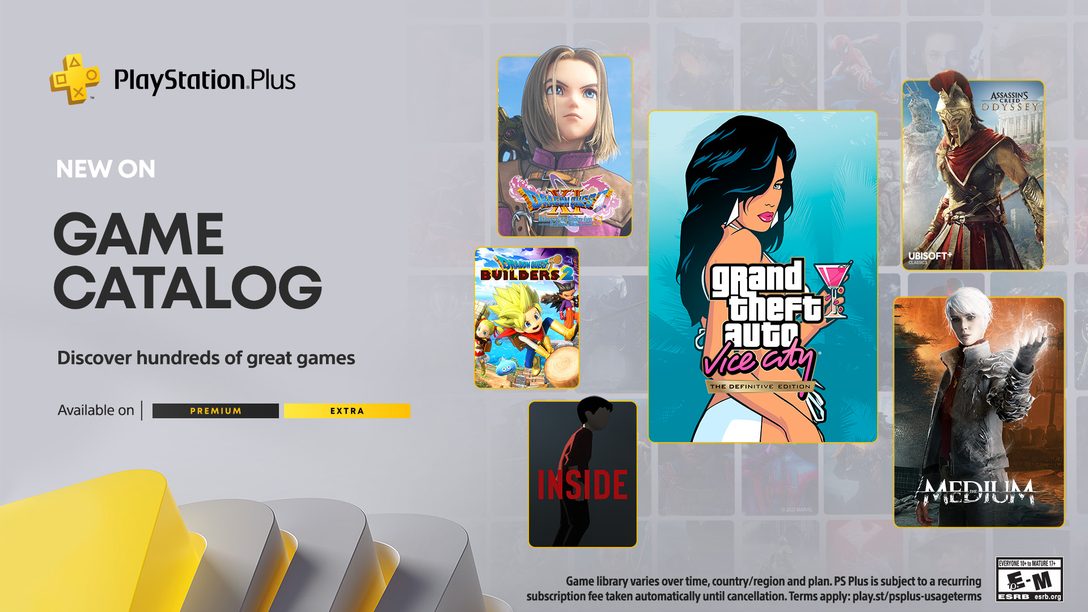 A bumper crop of PlayStation titles make up October’s PlayStation Plus Game Catalog lineup. All these games will be available to play starting Tuesday, October 18. Without further ado, let’s dive in.

Explore a massive world as you embark upon an epic RPG adventure as The Luminary: the chosen one in a world that vows to hunt him down. The Luminary and his unique band of loyal companions work together to survive an onslaught of ne’er-do-wells and overthrow the dark forces that plot to plunge the world of Erdrea into chaos.

Write your own legendary Odyssey and live an epic adventure in a world where every choice matters. Sentenced to death by your family, embark on a journey from outcast mercenary to legendary Greek hero and uncover the truth about your past. Customize your equipment and master new special abilities, tailoring your character’s skillset to your play style. Fight your way across Greece, engaging in visceral battles both on land and sea, to become a legend. Assassin’s Creed Odyssey runs at 60 FPS on PS5.

Gather materials, craft items, and build everything imaginable as you explore a sandbox world made of blocks and packed with memorable characters and dangerous monsters. Use the power of creation in battle against the reigning Dragonlord and restore peace to the shattered realm.

This block-building role-playing game includes a charming single player campaign and a robust multiplayer building mode that supports up to four players online. Set off to revive a forsaken world alongside a mysterious companion named Malroth. Then, take your builder online and join your friends to collaborate and create something truly magnificent.

Dragon Quest Heroes: The World Tree’s Woe and the Blight Below | PS4

Venture forth on an all-new action RPG adventure. In the peaceful kingdom of Arba, man and monster live side by side. But when the monsters suddenly snap and go on the rampage, it’s up to our heroes to fight back against wave after wave of their former friends! As either the hero Luceus or the heroine Aurora, the player joins forces with a cast of fan favorites from previous Dragon Quest titles to bring the rampaging hordes of monsters to their senses and restore order to the kingdom.

This hack-and-slash, field-roaming action RPG sends players on adventures to restore order in a once peaceful world filled with monsters and battles of epic proportions. Featuring a cast of playable characters each with unique moves and abilities – including a host of familiar faces from the Dragon Quest series and four brand new heroes. Up to 4 players can band together in cooperative multiplayer to conquer swarms of enemies and defeat challenging boss monsters.

Hunted and alone, a boy finds himself drawn into the center of a dark project. This dark, narrative-driven platformer combines intense action with challenging puzzles. It has been critically acclaimed for its moody art style, ambient soundtrack and unsettling atmosphere.

This third-person psychological horror game features innovative dual-reality gameplay. Explore the real world and the spirit world at the same time. Use your psychic abilities to solve puzzles spanning both worlds, uncover deeply disturbing secrets, and survive encounters with The Maw – a monster born from an unspeakable tragedy..

Multiplayer competitive combat is the name of the game as two teams of four face off on the battlefield to prove who the best group of ninjas are! Build a 4 player team, selecting from fan favorite Naruto characters, and go online and join up with friends to compete against other teams for 8-way ninja clashes.

Embody Arbaaz in his quest for retribution through a colourful depiction of Colonial India in 2.5D stealth gameplay. Experience the thrill of a stealthy assassin with a unique set of skills and weapons such as the double kill moves and the chakram, then discover a brand new mode with stealth, speed and assassination rooms.

Dive into the aftermath of the Red October revolution in a 2.5D reimagining of the Assassin’s Creed universe set in 1918 Russia.  Play as the Assassin Nikolaï Orelov or Anastasia and discover their powerful abilities and versatile tools.

Relive the American Revolution in Assassin’s Creed III Remastered, with enhanced graphics and improved gameplay mechanics. Plus, Assassin’s Creed Liberation Remastered and all solo DLC content are included. 1775: The American Colonies are about to revolt. As Connor, a Native American Assassin, secure liberty for your people and your nation. From bustling city streets to the chaotic battlefields, assassinate your foes in a variety of deadly ways with a vast array of weaponry.

London, 1868. In the heart of the Industrial Revolution, play as Jacob or Evie Frye, brash and rebellious young twin Assassins and lead your underworld organization and grow your influence to fight those who exploit the less privileged in the name of progress.

Explore extraordinary worlds. Become a curious flying kite-like being as you travel to colourful worlds just waiting to be explored. Interact with eclectic characters, wacky toys and peculiar environments to uncover some very strange secrets… or simply roam at your own pace and be totally amazed and amused at the surprises that unfold in front of your eyes.

*Available on PS4 only. When playing on PS5, this game may exhibit errors or unexpected behavior and some features available on PS4 may be absent. To play this game on PS5, your system may need to be updated to the latest system software. See PlayStation.com/bc for more details.

Kazuma Kiryu had earned his retirement. Yet he’s ripped from his new life as caretaker of an orphanage when a shadow from his past threatens to entangle his new life with that of his old clan and the political world. Adventure through the sleepless city of Kamurocho, Tokyo and the tropical lands of Okinawa to help rescue his new wards.

The Yakuza story expands as the first time in the series you’ll control multiple protagonists, four souls – a loan shark, a death-row inmate, a corrupt cop and legendary former yakuza Kazuma Kiryu –  are drawn together to solve a murder. Unravel a hidden battle over money, power, status, and honor as well as the mysterious woman at the center of it all.

Multiple perspectives once again shape a sprawling story as peace between the Tojo Clan and Omi Alliance disintegrates. Play as five different characters, including Kazuma Kiryu, across five major cities whose stories are interwoven as the yakuza organizations go to war.

Uncertain of his sister’s fate, a boy enters Limbo. This unsettling, 2D puzzle platformer was created by PlayDead, the studio behind the equally critically acclaimed Inside, which is also included in the Game Catalog this month.

This third-person action adventure is a dark and vivid re-imagining of the Castlevania mythology that sees the holy knight Gabriel Belmont strike out to battle the evil forces of darkness in revenge for this death of his beloved wife.

Everyday Shooter is an album of games exploring the expressive power of abstract shooters. Play through different levels each with a completely unique musical, graphical, and gameplay style. Shoot to trigger musical sounds and riffs that combine to form the final soundscape of the game. Use points earned in the game to unlock extra lives, shuffle mode, and different visual filters.