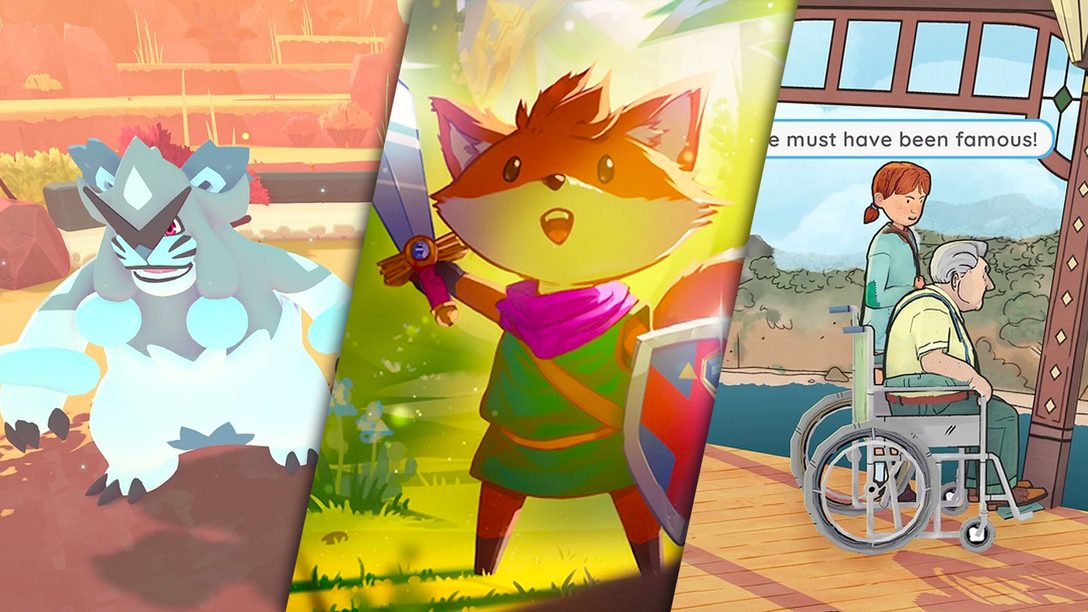 We’re fast approaching the month of September. Soon the temperatures will be cooling, leaves will be changing color, and a fantastic harvest of indie games will be filling our PS Store baskets. September’s got some heavy hitters–The Last of Us Part I, anyone?–but there’s also a bumper crop of amazing indie titles you’ll want to look out for. From killer game shows to character-driven adventures to delightfully eye-searing retro gunplay, here’s what you can look forward to on PS4 and PS5 this month.

Are you looking for a new twist on the tried-and-true critter collection genre? Temtem is exactly what you’ve been hunting for! This game from Spanish developer Crema takes the concept of finding, taming, and battling creatures to a massive new scale in a persistent online multiplayer world. Colorful creatures called Temtem inhabit the beautiful island paradise of the Airborne Archipelago, and you’ll catch, train, and battle them in tried-and-true turn-based combat. But you’re not alone on your journey to the ranks of top Temtem trainer. Team up with friends or strangers online to explore the islands, battle the minions of Clan Belsoto, and fight and trade your collected Temtem. With oodles of Temtem to find, copious customization options, and weekly special quests, your Temtem adventure will likely keep you busy for hundreds of hours.

The stylish, Soviet-era-propaganda-inspired cult classic from developer Q-Games makes its return on PS4 and PS5. The Void is a desolate, harsh expanse blanketing the planet. It is where human souls lay trapped, the unintended result of an experiment gone horrifically wrong. But the remnants of humanity have found a way to explore the Void and rescue surviving organic lifeforms through the use of “projection clones.” Using these clones, you will explore the patches of land that have risen from the Void in search of survivors and materials. But beware–the Izberg, titanic monsters composed of suffering and negativity, roam the Void with a hunger that can never be sated.

The Tomorrow Children offers a unique blend of exploration, resource-gathering, and town-building gameplay. While the original release of The Tomorrow Children was a free-to-play title, the Phoenix Edition adds in an offline single-player mode, new islands, more exploration tools (including the new grappling hook), landscape-transforming monoliths and other surprises which are unique to this purchasable edition.

A hospital on an ornate floating ship? That’s undoubtedly something newsworthy. You’ll be able to visit this new frontier in medicine in Wayward Strand, a charming dialogue-driven adventure from Ghost Pattern launching on PS4 and PS5. Casey’s a teenager with a budding journalistic streak setting off to report on the airborne medical center. As she explores the airship and meets the hospital’s patients, she grows more embedded in their lives, memories, and mysteries.

The events of this fully voiced slice-of-life adventure unfold in real-time, with the characters’ lives connecting, diverging, and intertwining as the minutes, hours, and days pass by. You can follow them, spend time with them, learn their stories, and form special bonds. Pursuing one story means you may miss another, but Wayward Strand is a game made to be played repeatedly, with you able to uncover new content based on your choices every time you begin anew. Take some time to explore and listen, and let Wayward Strand create gaming memories you’ll cherish for years to come.

The beautiful, critically acclaimed action-adventure masterpiece Tunic comes to PS4 and PS5. This passion project from independent developer Andrew Shouldice follows a young fox sporting the titular fantasy garb as he goes on a gallant adventure through gorgeously rendered geometric environments. Explore a vast, beautiful world from an isometric viewpoint, solving puzzles and finding new items and abilities to open new pathways. Decipher a unique in-game language to find clues to secrets and mysteries that lurk around many a corner. But beware; this world is also filled with terrifying beasts, and you’ll need all your wits, courage, and tools to best them in combat. Use an arsenal of fighting maneuvers to conquer the threats that stand in your path to progress further and uncover more fantastical places. What sort of wonders will you unearth on your journey, brave one?

First-person shooters have greatly changed since they initially hit the scene in the early 90s. As advanced as modern shooters are today, sometimes you might want to go back to something more old-school in its design. Something that, perhaps, looks like it was ripped out of the pages of that weird photocopied zine somebody left on the “free” shelf of your local comic book store. Something that wants you to move and kill as fast as possible because you will die pathetically from your life oozing from your cranium if you don’t. And for that oddly specific craving, YCJY Games’ Post Void is coming to PS4 and PS5 late this month.

Blaze through a bullet-laden, gore-soaked neon-colored nightmare world where the two rules are: A. move fast through winding, maze-like corridors, and B. kill everything you can. Experience pure, retro-styled FPS gameplay that dares to ask, “What if you could see and play a noise album?”  (Please note: this game is not suitable for those with sensitivity to flashing lights.)