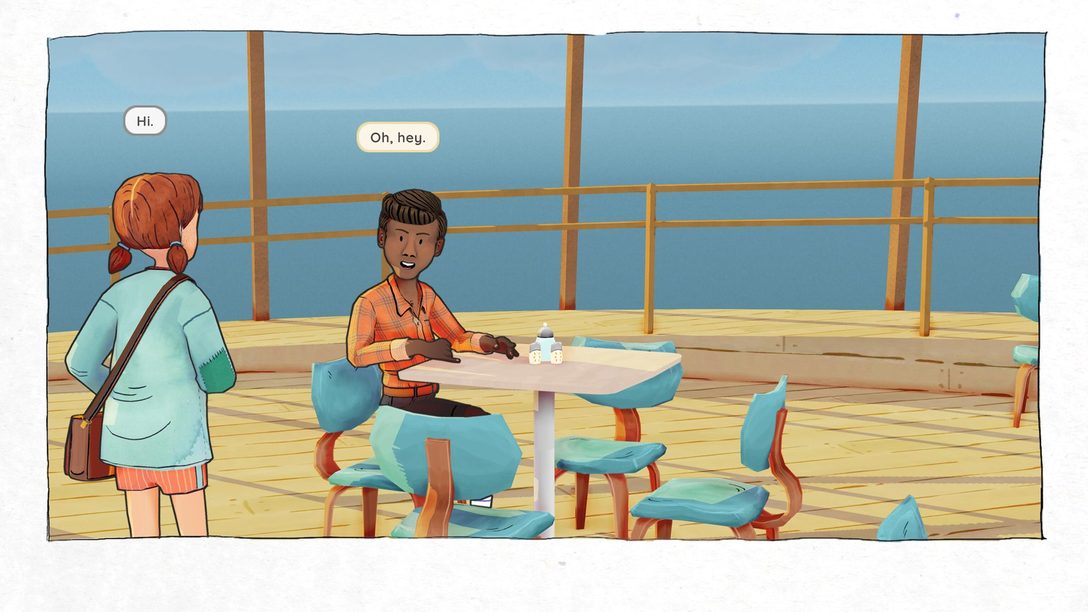 Hey, I’m Goldie, the art director for Wayward Strand, coming to PlayStation 5 and PlayStation 4 on September 15 (that’s so soon!!)

For the first time in the six years since Ghost Pattern was formed, me and the team are sharing a deep dive into the making of our real-time, simultaneously told story, Wayward Strand, starring Casey, a 14-year-old aspiring journalist, as she follows her curiosity wherever it takes her.

Early artwork of how the ship might be loaded up with supplies, by me! Goldie Bartlett

From the start, the game was heavily inspired by immersive theater, slice-of-life comics, and graphic novels. Something I love about this format is that there’s a lot of space and area to tuck moments in amongst the larger plot points and knots of storylines.

Cast away! Creating our characters

Our team created Wayward Strand’s characters based on personal experiences and stories from people in our lives, particularly older people. We wanted our characters to be active within the story, as opposed to waiting around for the player to come by before they do anything. Georgia Symons, one of Wayward Strand’s writers, remembers that “the goal was to give each character the potential to ‘move the story forward’, through whatever actions they take.”

In early demos we were excited by how simultaneous storylines give the player the opportunity to happen upon scenes or storylines in mid-flow. It helps the player both understand and feel that there is a world of activity going on outside of their character.

Ghost Pattern’s earliest mock-up of the Day 1 schedule in 2016/2017. Each row, a different character and each column a time of day.

Wayward Strand’s other writer, Jason Bakker, feels like telling many storylines at the same time means we can really round out our characters. “It allows each character to have quiet moments, time to themselves. Each character can be the centre of attention for a bit, then the player can follow them as they return to their rooms, and be with them as they process what just happened.”

Screenshot of the current build, at the front of the ship overlooking the coast.

We’ve challenged ourselves to make every character as interesting as possible over the course of three in-game days, and that’s a part of making Wayward Strand I’ve absolutely loved. Often I’d have a conversation with someone — my mum or an aunty or a friend — they’d tell me some story about someone they once knew and I’d think, “that is SUCH an Esther thing to do” or ‘that’s exactly how Joe (one of the nurses) must be feeling about Dr. Bouchard’. Over the past six years, little nuances that relate to people we know have been added to the characters piece by piece.

We’ve gone through many generations of the visuals for our living world. Our first plans were to explore fully-3D spaces in an over-the-shoulder format, within a single-story hospital; when you went into a scene, the camera would cut around as each character spoke. In that demo, we weren’t seeing the larger backdrop of the busyness of the hospital, or even the beautiful sea/skies outside, and decided to go in a fundamentally different direction.

A scrapped layout of the ship, where the rooms were laid out widthwise.

Maize Wallin, our audio director, says the change to a side-on view is one of the key experiential differences. “This side-on doll’s house view makes it much clearer to the player that there’s constantly things happening around them.” We built our next demo in a side-on style, where the camera looked “down the barrel” of the ship, and rooms were laid out widthwise. Only after working with Su-Yiin Lai, an architectural consultant, did we discover that lengthwise was the best way to achieve the comic-book style we were hoping for – this was the final rebuild, and what you’ll see in game.

An early design of the lengthwise hospital airship.

How the ship looks today!

One thing we’ve been confident in since the very early days is that the game should be fully voiced; as well as wanting the game to benefit from actors’ performances, like theater, we needed the player to be able to hear all the conversations going on around you as you play. We did two rounds of ‘practice’ voice-over recording sessions in 2016 and 2018, which taught us that the voice-over production for the full-game would be a massive undertaking.

And it was – over the course of six weeks we spent 30 days with our actors, across four studios around the world. Maize, the technical audio director for the VO sessions, says we’ve recorded over 18,000 lines of dialogue; the equivalent of about eighteen feature-length movies. It took cohesive narrative direction, programming, technical audio, and audio engineering and voiceover audio specialists to make it all possible.

Casey is heard making many hellos!

As we’ve gotten close to release, we’ve been watching people play the game and realised although many things have changed along the journey, our core goals never wavered. When you play Wayward Strand, you’re spending time in a living world surrounded by interesting, complex characters and their evolving stories, inspired by personal experience and real history.

We’re so excited for you to experience it yourself on September 15, on PlayStation 5 and PlayStation 4!