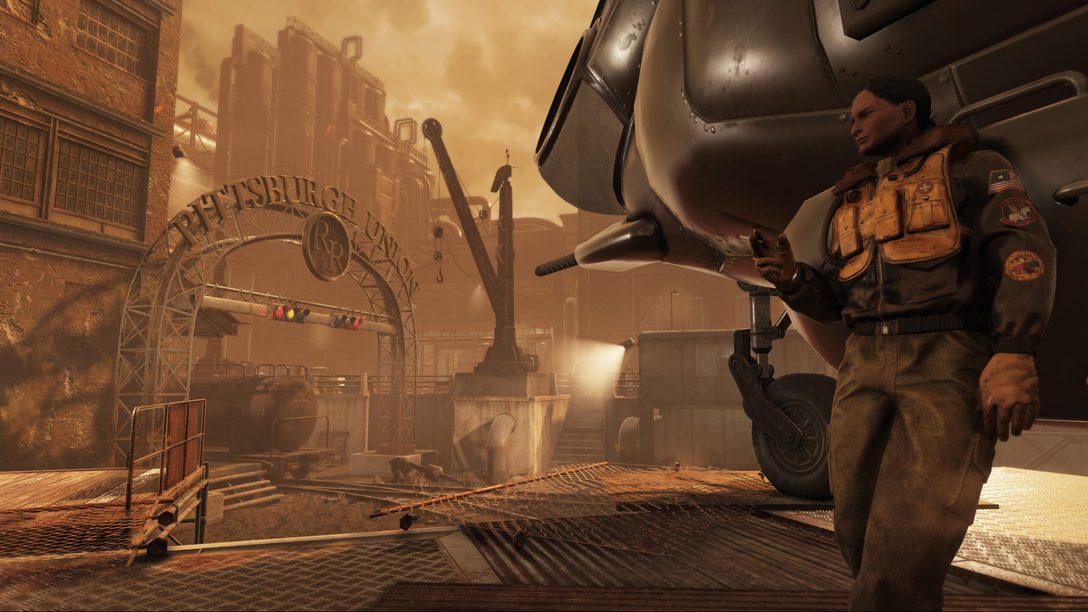 Be prepared to step outside Appalachia’s borders this September with a primer on Expeditions.

Fallout 76 players are about to venture into new territory. This September, the Expeditions update whisks players to a perilous location outside the wild reaches of Appalachia: The Pitt!

Built on what’s left of Pre-War Pittsburgh, The Pitt is a rough place. The local Union faction is beset on all sides as bloodthirsty Raiders and once-human Trog beasts close in, so grab your friends, pack your best gear and steel yourself…it’s time to go on an Expedition.

Gear up and head out

“Expedition missions are randomized and repeatable story-based missions on the scale of our most epic end-of-line quests, such as the Vault 79 raid at the end of Wastelanders,” explains Steve Massey, Lead Designer on Fallout 76’s Expeditions. “We developed a new Quest Module system which allows us to easily randomize and retheme quest objectives in order to make each mission playthrough feel truly unique and blend seamlessly into the overarching mission story.”

Players can tackle missions either solo or in a group with up to four people – either with friends or by using the new Expedition Public Teams feature included in the update. Players can earn a unique item plan once per week upon completing an Expedition, as well as collect Stamps in order to claim specific items from the reward pool. Players can also earn repeatable rewards including legendary items, Scrip, Treasury Notes and even an all-new method for gaining Legendary Modules.

Return to the Pitt

Of course, there’s more to Expeditions than precious loot. Expeditions lets Fallout fans visit The Pitt for the first time since 2009’s add-on DLC for Fallout 3. With Fallout 76 set prior to the events of Fallout 3, Expeditions offer both exciting replayable missions, but also give players a chance to truly explore Pittsburgh in a fascinating era of Fallout lore, seeing the city in a new light…and previewing its coming darkness.

“The team felt passionate about allowing players to explore other parts of the Fallout universe outside of Appalachia in this unique time period, only a few decades after the Great War,” Massey continues. “The Pitt was an obvious choice for the first city to visit, because in Fallout 3 it was such a bleak and unforgiving landscape that you ask yourself, ‘How did things get to be so bad?’.” In the future, the format of Expeditions also gives us the opportunity to take players to brand-new locales in the Fallout universe that no existing game has touched upon before.”

Go alone or with a team – just be ready

While any player can sign up for an Expedition solo or as a group, be warned: It can get dangerous out there. It’s suggested that you first reach Level 50 or higher for the best experience stepping into The Pitt, with greater challenges awaiting solo Expeditionaries than those bringing along a few friends.

“Much like other high-level story-based quests in the game, Expedition missions have combat tuned to be satisfying – but not overly punishing,” Massey says. “Players should come well-equipped, but all enemies drop relevant ammo and Stimpaks to help keep them going in the field.” Want to play with someone at a different level? Nothing to worry: Like other content in the game, enemies during Expeditions scale based on player level. “A low-level player can accompany a high-level friend on a mission and both will experience an appropriate level of difficulty,” assures Massey.

Speaking of newer players, the Expedition update also includes other enhancements to the game such as adjusted starting gear and other additions benefiting fresh-faced Vault Dwellers just stepping out into Appalachia.

“The Whitespring Resort has been completely revamped into a player hub called Whitespring Refuge,” says Massey. “Players will participate in Refuge Daily Quests, experience a brand-new random encounter system and repair/purchase/craft almost anything in the game that they want in the lower Whitespring Mall area. Additionally, the update comes with a ton of frequently requested quality-of-life changes, including the ability to fast-travel directly into the interiors of frequently visited locations like The Whitespring and The Rusty Pick without spending any Caps.”

That’s the scoop on Expeditions – now it’s time to train up. Jump into Fallout 76 and explore, build and commune with players in your very own slice of post-nuclear West Virginia today! The Expedition update arrives free for Fallout 76 players this September, playable on both PlayStation 4 and PlayStation 5 systems. Until then, we’ll see you inside (and soon, outside) Appalachia!