Crafting a fictional world by representing the best parts of this one.

Speculative fiction often turns the lens back on the reader, making the previously unknown become knowable by turning it into story.

It’s long been used as a vehicle for representation, from Star Trek exploring new frontiers of romance, to Octavia Butler positioning a Black woman at the forefront of humanity’s escape to space in Parable of the Sower, to dystopian YA like The Hunger Games tapping into every young woman’s desire to change the world by burning it down.

I’m Lindsay Ishihiro, and as the narrative designer of I Was a Teenage Exocolonist, I’d like to tell you about the ways our game follows in this tradition, breaking new ground in how players represent themselves and their gender, sexuality, and relationships in a video game.

I Was a Teenage Exocolonist is a genre-spanning game about growing up on an extrasolar colony: part life simulator, deck builder, roleplaying game, and dating simulator. You play Sol, a child whose parents – unhappy with their life on a dying Earth – flung themselves into space intending to create a new human culture from the ground up on the planet Vertumna IV.

Given absolute freedom, what do a group of idealists preserve from human cultures, and what do they reject? And what do they accidentally bring with them, despite their best intentions?

Exocolonist’s simple character creation system hits far above its weight class. There are only two questions: what are Sol’s pronouns, and will they grow to appear masculine, androgynous, or feminine? 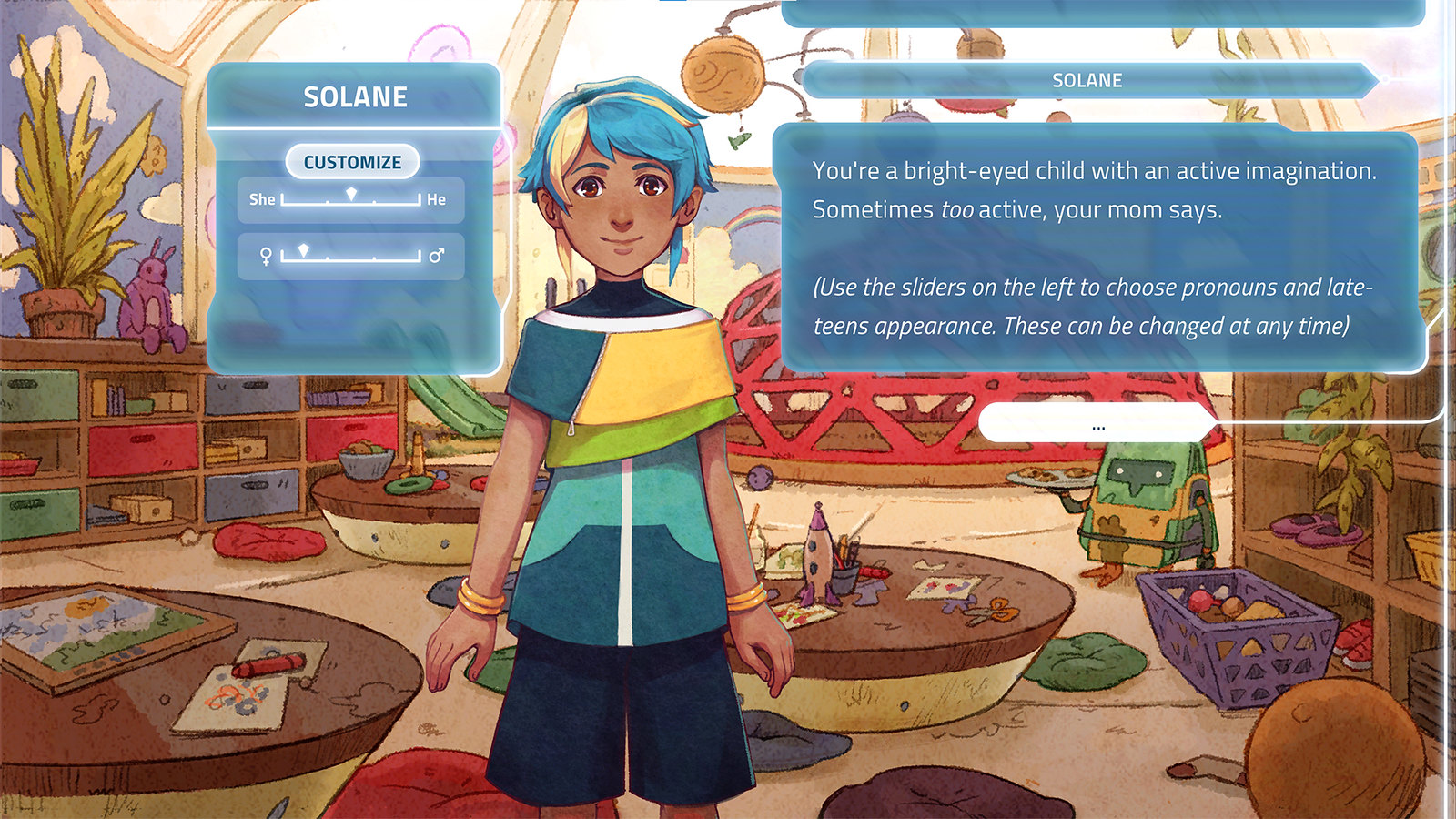 Even the UI to select Sol’s appearance is a slider instead of three buttons, giving the player a chance to say their Sol is ‘just a little’ masculine or feminine.

They/them is included in the standard pronoun selection, but players who prefer a more bespoke experience can teach it to use their correct pronouns and other gendered terms. In space, anyone can be fae/faeself.

You can even change their pronouns and appearance at any time, no gender-changing items or cursed springs required.

Sol’s anatomy is set later, during puberty – but there’s even an option for Sol having no reproductive anatomy at all, thanks to futuristic medical technology. Anatomy being separate from appearance and pronouns allows for a huge spectrum of possible genders, encompassing cis bodies, binary and non-binary trans bodies, and gender-nonconforming bodies of many kinds. 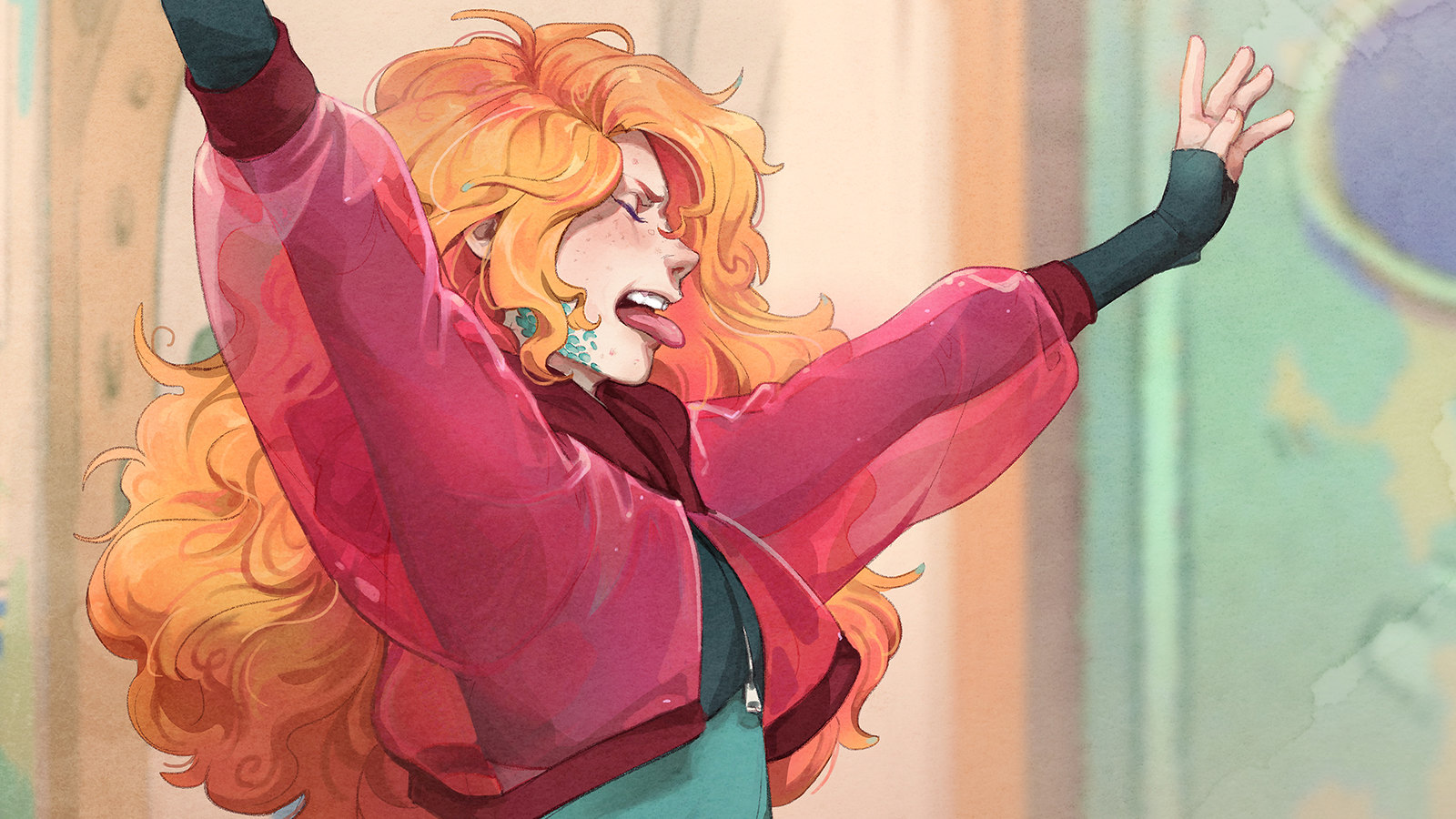 Even teenage exocolonists have to sit through cringe-inducing lectures in school. Sorry, space teens!

Sol wasn’t the only child born in space; nine other children grow up alongside Sol, all of whom (plus one more) are potential friendships and love interests.

Let’s get what I consider the bare minimums out of the way: I Was a Teenage Exocolonist is proud to feature transgender and nonbinary characters and includes same-sex, asexual, aromantic, and even polyamorous relationships.

With a diverse team, we knew that in order to tell a story about the richness of the human experience we needed to be radically inclusive in our characters and the way they interact with the player and each other.

And they do interact with each other! Sol’s friends fall in love, hurt each other, undergo their own tragedies, and even die. Sol is a part of their stories; you choose how important a part you play.

Sol becomes closer to their friends by giving them gifts and saying the right things, of course, but also by being the kind of person they’d want to be friends with. Working alongside them, sharing their political opinions, and getting involved in their stories will bring them closer, just like in real life. 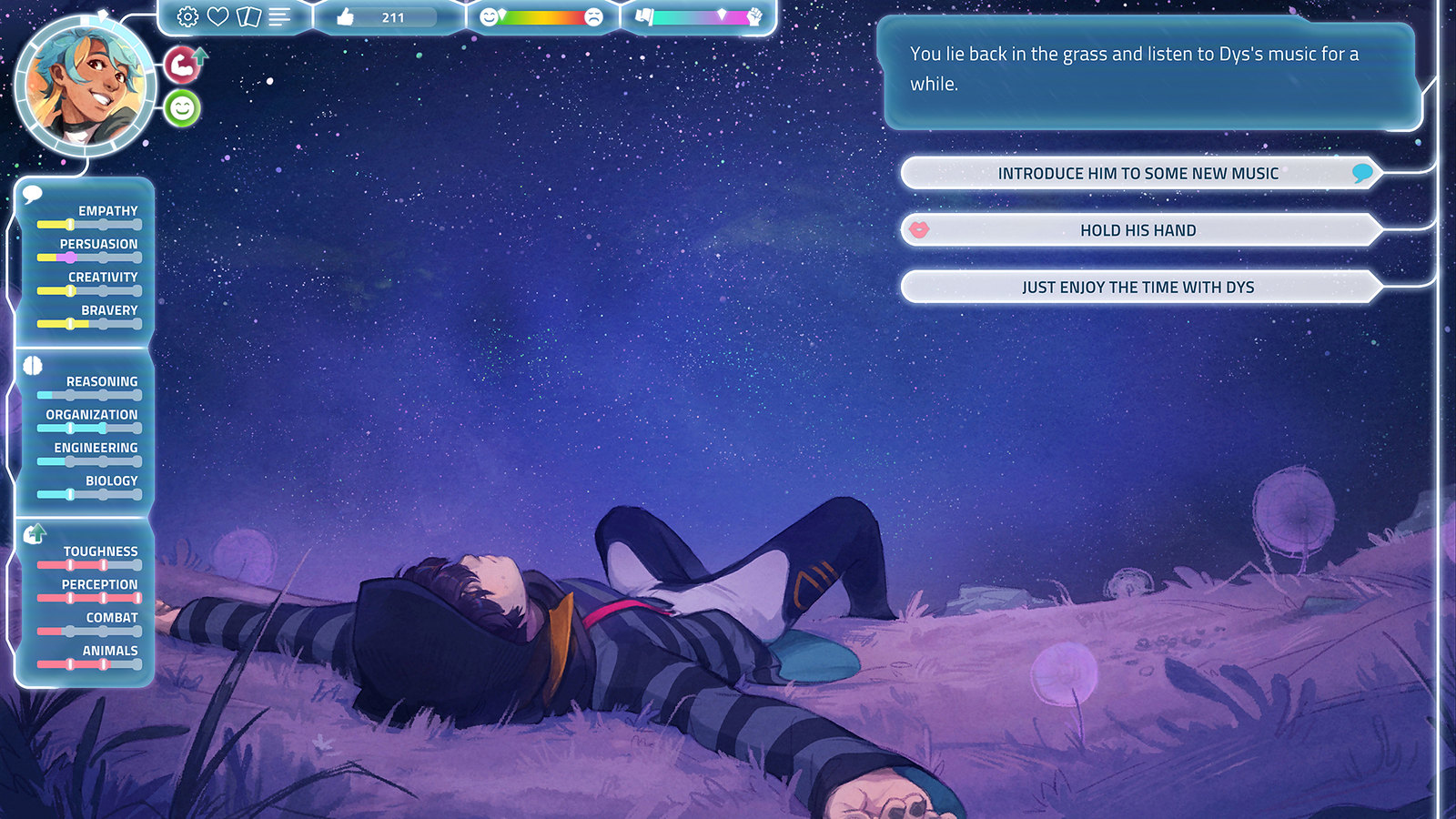 Also like in real life, friendships can blossom into something different.

I Was A Teenage Exocolonist has unique triggers for all relationships. Yes, some still need ten hearts before they’ll give you a kiss, but others are happy to make the space beast with two (and sometimes three) backs while you’re still getting to know each other. Some characters need you to step up at a critical time in their life to feel comfortable opening up to you. Some need to finish their life’s work first. Some naturally prefer to date other people, so getting them interested in Sol requires extra effort.

Thanks to the weirdness of the wormhole, Sol will relive their teenage years over and over, learning from their mistakes and helping humanity find its place in the stars. You’ll be many Sols, over many lifetimes.

Accurately representing the player in I Was A Teenage Exocolonist is integral to the experience of being Sol, giving them the sense that their unique self is important to humanity as a whole.

It was vital to telling a story about finding oneself, literally, at the very forefront of humanity’s most collective action.

i was a teenage exocolonistnorthway games