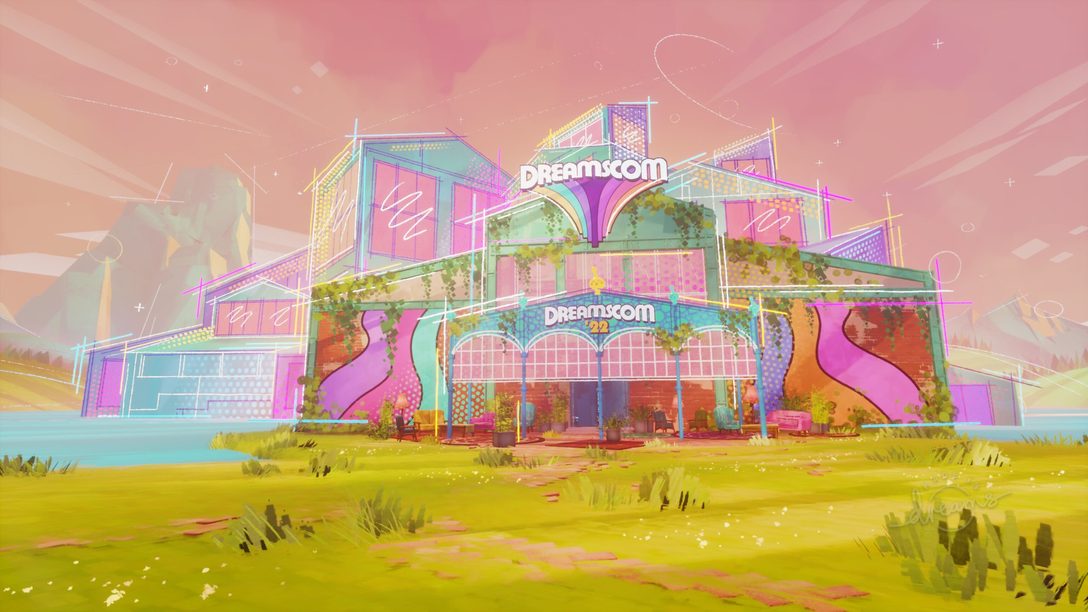 DreamsCom ‘22 – our giant community-first games expo, made entirely in Dreams, by the way – has now wrapped up for another year. It’s been a blast checking out all of our player-made booths on the virtual show floor, and interviewing Dreams developers live on our Twitch channel. So much good stuff! Who knew? (Us. We knew. Now you do, too!)

No worries if you missed out, though, because the show floor is still playable in Dreams! Go check it out*, poke around, maybe discover some secrets… We won’t spoil too much, but suffice it to say there are some pretty cool surprises for those of you that hunt down every hidden treasure.

And guess what? All these amazing creations that featured at DreamsCom ‘22 are still playable in Dreams today, too. We’ve selected just a few highlights from this year’s lineup – check them out below. (If you’d like to see them in action, you can catch up with our VODs over on Twitch, and even hear the creators themselves talking about their games!)

Dreams’ prince of pixels returns – this time, in 3D. Yes, the creator of Impy-winning side-scrolling shmup Solar Blast has turned their hand to the third dimension, and the results are mesmerising. Against an uncanny backdrop – a skyful of stony repeating cloud textures, a nostalgia-inducing field of flat green – we cycle through the weapon wheel, firing shots at drones. Things get even more unreal when we discover we have the ability to freeze time. We slow everything to a crawl in areas where we find ourselves suddenly surrounded so we can aim shots better, calculate platforming routes quicker. It’s clear from these two taster levels that Paulo’s understanding of level design is translating across dimensions well – as diligent secret hunters looking to get the most out of this demo will discover.

A concept so good it needs no set-dressing: in this puzzle-platforming demo, you’re physically linked to a corpse. Your goal is to navigate a mysterious seaside bunker, all while carrying this dead weight (apologies, old bean, but the truth hurts). Still, they’re not totally useless: the gas mask that links you to the body is perhaps your first clue that your stamina meter is linked to it, so you’re in this for the long haul together. Thanks to some weighty animation and physics, the process of learning to cleverly navigate obstacles and threats while picking up and putting down your floppy sidekick is curiously arresting.

Gardens are meaningful places. In a garden, growth is everything, small victories are celebrated, and communities gather to share knowledge – even to sustain themselves. Asset artist Nephrendil has a deep understanding of this, and it’s a joy to behold; they’ve been running community asset jams to populate the Dreamiverse with a huge variety of low-thermo (read: easy on scene memory limits) flora that anyone can use in their own creations. All entries are presented in interactive showcases that display what’s possible when a community nurtures something together. As Season One comes to a close, leaving behind the fruits of everyone’s labour in full bloom, we’re looking forward to seeing what springs from this next.

They say war never changes, but Battlepigz begs to differ. We’d say a squad of elite sow behind enemy lines, meched up to the nines, is a pretty different kind of conflict. This real-time tactical shooter delivers on its concept in this generous demo, too; there’s an expertly crafted and presented tutorial, and three full levels out of the 40 promised across the five campaigns in the full release. Anyone familiar with shmup classics such as Cannon Fodder will feel right at home in this porcine platoon – and there’s real tactical depth here, with a variety of ways to delegate your forces and hone your approach to each mission.

Looking like it’s crawled straight out of the indie bestsellers category – that creepy, drippy 2D painted art style is to die for – is this QWOP-esque, movement-based challenge. You control the titular quadruped by hovering your cursor over its legs, then manually dragging each one into the next position. Simple, right? Until you see the fiercely competitive Race scoreboards, that is, and realise there are innumerate ways of optimising your gyroscope-powered skittering to beat your friends’ times.

Liminal
By Rammstein53452 and matizzle1

If there’s one thing we’ve learned over the course of the past year, it’s that the CoMmunity absolutely loves liminality. Endless staircases, empty corridors, odd-looking offices… (Okay, that last one’s not liminal, it’s just Mm Towers on any given Tuesday.) So here’s a concentrated dose of just that. Rammstein53452 and matizzle1 have taken a novel approach to this demo for their forthcoming psychological survival-horror shooter; this is a pleasingly rangey highlights reel. Expect everything from apocalyptic orange skies framed in gigantic walls of glass and concrete tunnels, to humanoid shapes wrapped in plastic and awful encounters with faces that loom out of the darkness. With pinpoint audio design and spot-on pacing, this is a good omen (or, perhaps a very bad one?) for the planned September release.