Rollerdrome: A pulse-pounding clash of wheels and weaponry 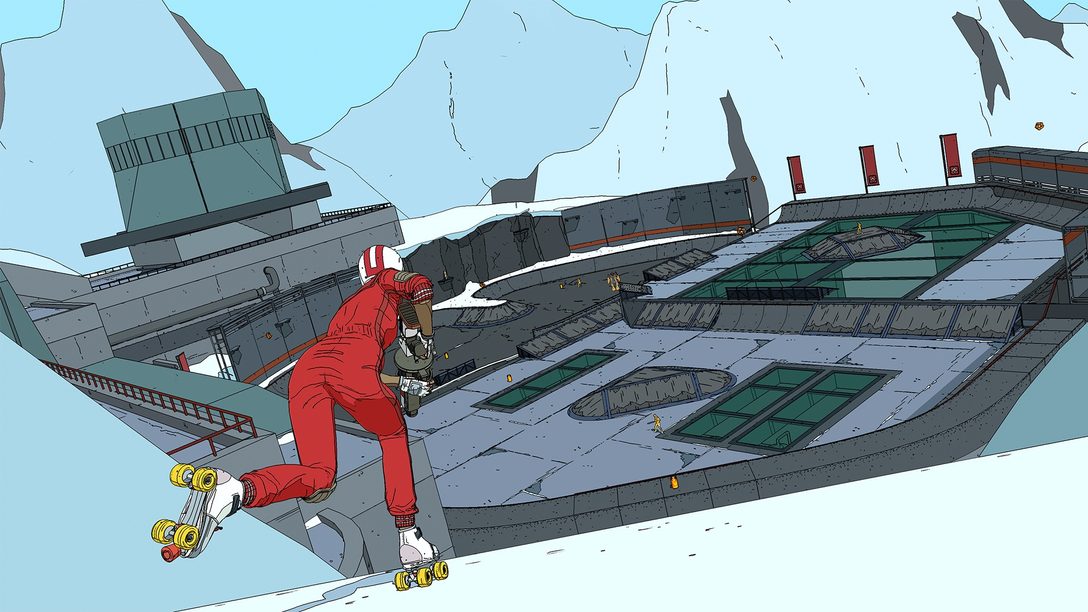 The heavily-armed future of skate-sports is here.

Have you ever wondered what the 21st century would be like if a few little things turned out differently? What if, for example, flat-screen monitors were never invented, and the popularity of roller sports kept growing until it became the most popular athletic event on Earth. And maybe things like streaming, social media, and eSports never emerged, leaving televised stunt-filled roller-sporting a predominant form of entertainment. And what if, perhaps, our society’s collective tastes had transformed to make all our sports more bloodthirsty. That’s the reality that developer Roll7 is pitching with its latest game, Rollerdrome.

Rollerdrome puts you in the skates of red-hot up-and-coming sports star Kara Hassan. It’s the year 2030, but things look very different: no smartphones, internet—not even video games. Instead, consumers are flocking to watch the world’s most popular new arena sport: the titular Rollerdrome. Kara’s got the spunk, charisma, and talent that could make her a megastar in the Rollerdrome world. Conveniently, that’s what corporate mega-conglomerate and Rollerdrome league sponsor Matterhorn wants to see. The blood and strife in the arena take the world’s mind off the blood and strife the company’s subsidiaries are fueling in the streets.

But what is Rollerdrome, exactly? Picture a well-crafted skate park, where you can get serious air and wow onlookers with crazy stunts, tricks, and grinds. Now picture that well-crafted skate park filled with bat-wielding hooligans, carefully placed snipers, armored warriors with rocket launchers, riot-gear-clad landmine experts, and teleporting laser-beam-slicer robots (just to name a few). These are the House Players, and to win, Kara has to take them all down with a small arsenal of weaponry, all while keeping the crowds entertained through stunning skating stunts.

Playing Rollerdrome is genuinely chaotic. You will learn very quickly that standing still is an invitation to be annihilated in a blistering hail of sniper fire and guided-missile explosions. You have to move, and keep moving, and never stop moving. Skate like your life depends on it because it does. If you enjoy games with speedy, fluid movement, you’re going to love the flow of Rollerdrome from the get-go.

Wheeling around is only half of it—you’ve also got to eliminate the House Players, which, as you’re rolling around ramps and slopes at high speed, can be difficult. Fortunately, Kara has a target-focus ability called Reflex Time that she can activate by holding the L2 button. This slows down time for a few seconds, allowing her to aim more carefully, activate special weapon effects, rapid-fire through enemy defenses, and see threats clearly.

Chaining enemy takedowns increases a score multiplier, and high scores mean higher grades when finishing a level (and higher ranks when registering on the leaderboards). Weapons offer different tactical strengths, though some are more effective than others in certain situations. For example, the mighty Grenade Launcher is great for taking out a packed-together group but not particularly strong against foes that can shield against its blast or targets that zip away immediately after being hit.

Juggling an arsenal of guns and tricks

There’s a catch to these weapons, however—they have limited ammo, and it’s easy to blow through a full clip, even just trying to take down the lowest-level House soldiers. (You’ll feel a horrifying, rapidly intensifying clink clink clunk through the DualSense controller as your ammo stock runs ever-lower.) There are no ammo pick-ups either, so to replenish your weaponry, you must reach into your bag of tricks and start stunting, big-time.

Yes, your weapons refill by performing sick stunts to wow the enthralled crowd. The longer and cooler the maneuver, the more ammo you’re rewarded. Developer Roll7 puts their experience in making trick-heavy titles like OlliOlli World on full display here, giving you access to a variety of maneuvers performed by using different button and environmental combinations. (And if you forget how to do any, the comprehensive Trickipedia is mere button-presses away.) But constantly performing stunts in Rollerdrome is not an easy task since while trying to show off your spins, wall slides, and grinds, you’re still marked for elimination by the House.

Needless to say, a sniper bullet to the back can really ruin the satisfaction you feel from that stylish grind-into-a-720-grab you just pulled off. Balancing the need to continuously stunt with the necessity to shoot and survive makes for a unique and innovative challenge that will prove formidable to even the most seasoned veterans of extreme sports and action games. Fortunately, you can dodge with the circle button—press it, and Kara will immediately stop what she’s doing to take an evasive roll or aerial dodge. Evading attacks when you’re zooming around the arena is tough, but learning how to do it well is a literal life-saver—plus, dodging hazards with perfect timing will also grant you ammo and bonus points. Try perfect-dodging during Reflex Time for even more style, enemy damage, and rewards! The PS5’s functionality is leveraged to offer additional beacons to help you survive, as approaching enemy attacks produce distinct sensations in the DualSense controller’s body—and 3D Audios’ positional sound can help you determine where enemies lie when you can’t see them easily.

The thrill of building your skill

What’s particularly great about Rollerdrome is how much you grow and learn the more you play it. Things won’t be easy at the start—at first, you’ll struggle with ammo management, chaining opponent takedowns, and evading hazards. Each new arena showdown will feel oppressive, a struggle for simple survival against overwhelming odds. But as you keep playing Rollerdrome, returning to those stages that gave you trouble and trying to complete their list of challenges, you’ll notice something: you’re learning. You’re getting better. You can recognize the patterns of enemies, dodging them effortlessly. You can bend the layouts of the levels to your will, stunting and shooting and sliding around like an untouchable god on wheels. You’ll see your scores go up and the challenges fall to your sheer skill. And that’s the core of what makes Rollerdrome such a fresh, exhilarating experience.

With loads of stage challenges, online leaderboards, and a myriad of ways to move and style on the House, Rollerdrome offers a fresh challenge chock-full of replay value and an infinite supply of Share-button-worthy moments. The Rollerdrome Arena opens worldwide on PS4 and PS5 on August 16. All challengers are welcome to leap into the fray and see if they have what it takes to conquer the championship—and once you get rolling, you won’t want to stop.