A new look for Bend Studio’s future, and a look back at its past 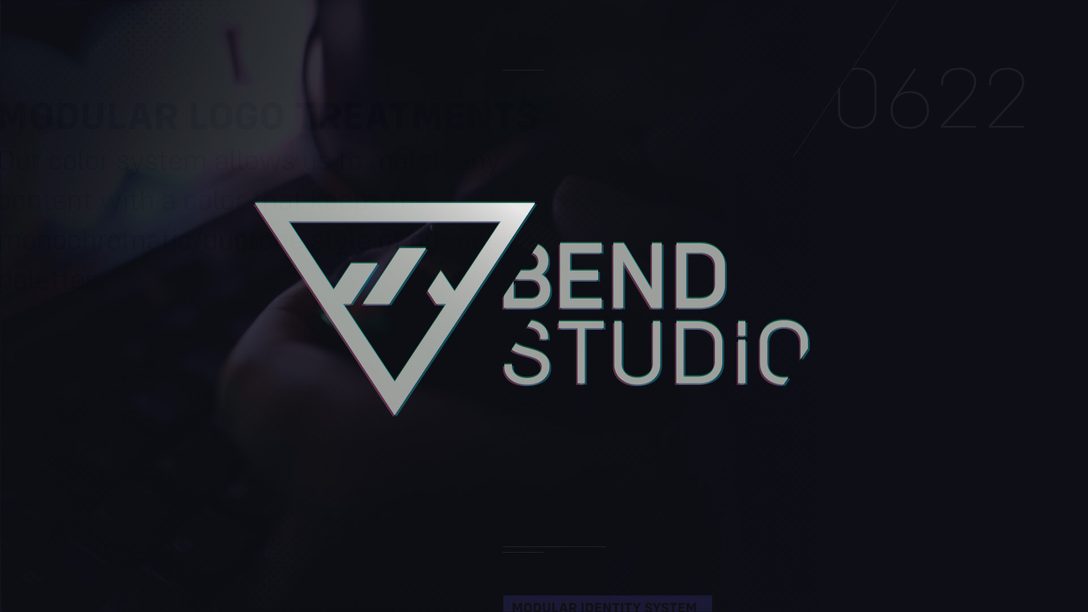 The Oregon-based PlayStation Studios developer unveils a new logo, and reflects on its history.

With 29 years of experience in game development, Bend Studio has had a rich legacy in video games. From the iconic Syphon Filter series to Resistance: Retribution, Uncharted: Golden Abyss, and Days Gone, we strive to provide our players with high-quality experiences that create a lasting impact. As we reflect on our past and look toward the future, we are thrilled to unveil the new Bend Studio logo to you all.

“The wordmark and symbol were designed to be graphic and bold, so that we utilize numerous variations in colorways and stylised treatments of the symbol (exampled below), while still maintaining an identifiable brand identity.  Because the Bend Studio logo is split into a symbol and a workmark, we have more flexibility with the symbol.” – Shay Casey

Our new Bend Studio logo represents an abstract and modern interpretation of the studio’s history, location, and lifestyle. Located at the base of the beautiful Cascade Mountains in Central Oregon, Bend provides us with a unique lifestyle where we can work in tech, but live life analog. After a day in the office, we like to plug into adventure and use our extra life to shred the slopes at Mt. Bachelor, drag a line in the Deschutes River, or take a long hike in the wild.

“We set out to create a new identity that would be cutting-edge, abstract, and minimalist. It should feature simple, high-tech geometry but also represent the constant motion of creativity. Ideally it would be the kind of logo that is recognizable to gamers on the street without the need for a wordmark. Over time it should be easily identified as a symbol of gaming just like a certain swoosh is of sportswear.

With those objectives in mind, we are illustrating Bend Studio’s technical innovation with a forward directional look. The letterforms are cut to run parallel to the leading edge of the outer symbol triangle but still maintain the stability of our mid-weight non-italicized font. The Cascade icon in the center of the symbol is an abstract representation of the many mountain peaks that are the center of our lives in Central Oregon and define our skyline. Additionally, there is a small break in the “I” that represents one of the lumber mill smokestacks that speaks to Bend’s history as a logging town before its current existence as an outdoor enthusiast destination.” 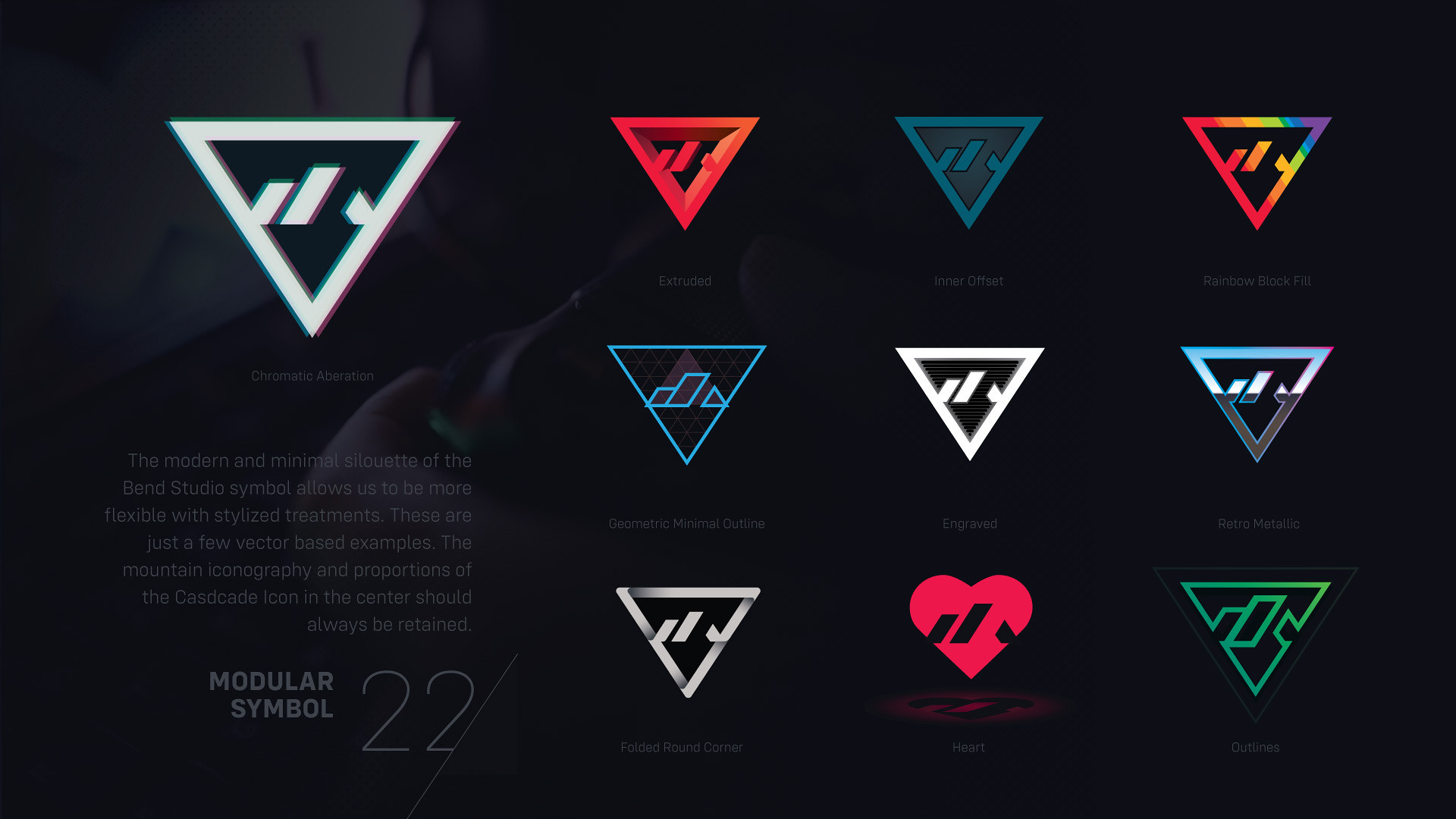 “The new logo allows us to be creative with stylised treatments. We had a lot of fun concepting the above.” – Shay Casey

Bend Studio traces its origins to 1993, under the name of Blank, Berlyn and Co. The company released several puzzle games for the Apple Newton, including Columbo’s Mystery Capers, Dell Crossword Puzzles, Motil, and Notion (List Maker). Shortly after, we hired Christopher Reese, the current Studio Head at Bend Studio, who helped release the first of a series of sports games, starting with Live Action Football in 1993 on PC. Following these releases, the company had the ambition to evolve and push into the world of console gaming.

In 1995, the founders renamed the company to Eidetic. Shortly after, the eight-person development team released its first console and 3D game, Bubsy 3D. From a technical standpoint Bubsy 3D was one of the few original PlayStation games that launched with a higher resolution and increased draw distances. Eidetic’s first title put the company on Sony’s radar. It proved we could develop a game on the newer PlayStation console, and that we already had an built-in engine that could run the next game. That next game was Syphon Filter. 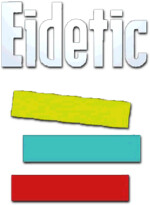 Syphon Filter is a third-person shooter and stealth-action game starring the character of special agent Gabe Logan. Syphon Filter released shortly after Metal Gear Solid and secured its place in the stealth genre. Bend Studio is known for its third-person action games, and that DNA began with Syphon Filter. We made sure that the camera’s angles were smooth, adapting to the player’s movement around obstacles in missions or while taking cover behind a building. While taking cover, Gabe’s head would also become invisible, giving the player a slight edge on an approaching enemy. 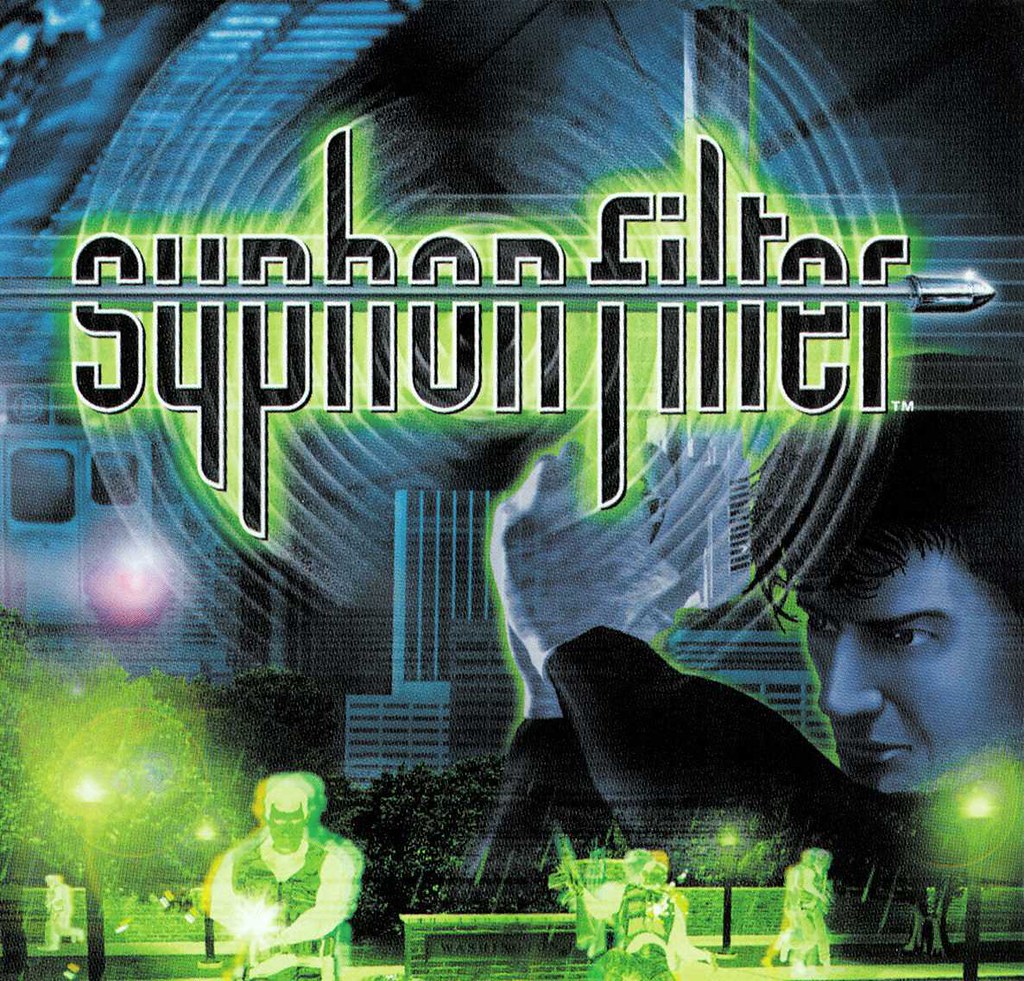 Syphon Filter was all about the weapons and gadgets, giving the player multiple options to complete levels through a combination of both action and stealth. Syphon Filter offered a wide array of weapons in Gabe’s arsenal to help take down enemies. The most popular amongst them was the infamous Air Taser. It was a one-of-a-kind weapon that had infinite rounds, able to electrify enemies and even send them into flames. The taser was designed to provide the player an option when they were low or out of ammo and be effective during stealth approaches. Syphon Filter was the beginning of a legacy, not just for the IP, but also for Bend Studio. 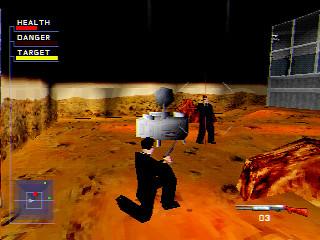 The team grew from eight to thirteen people during the development of the first Syphon Filter game, which hit the shelves in February of 1999 to critical praise. It immediately became a fan-favorite for years to come. After the success of Syphon Filter, Sony acquired Eidetic in 2000 and gave it the name you know today, Bend Studio. 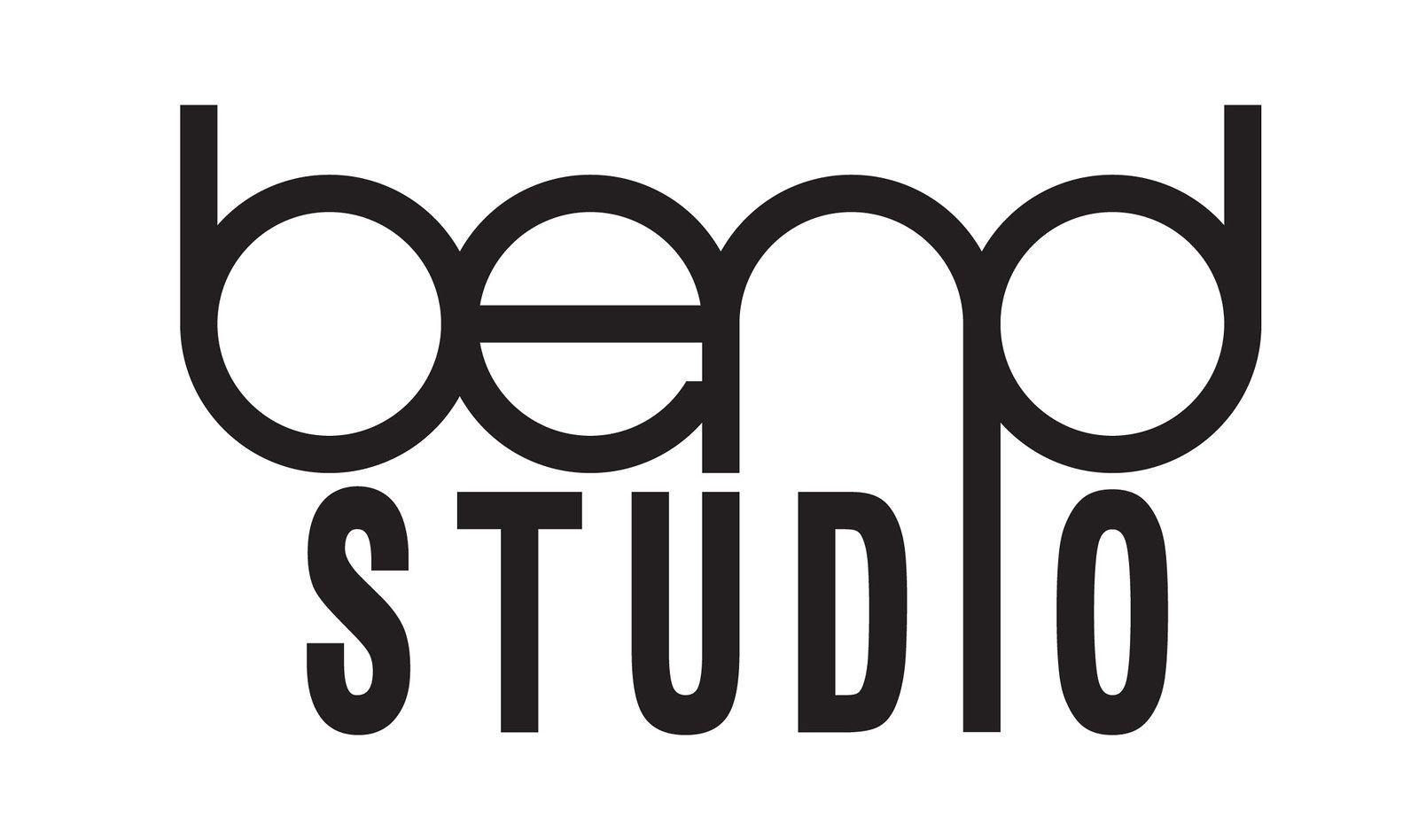 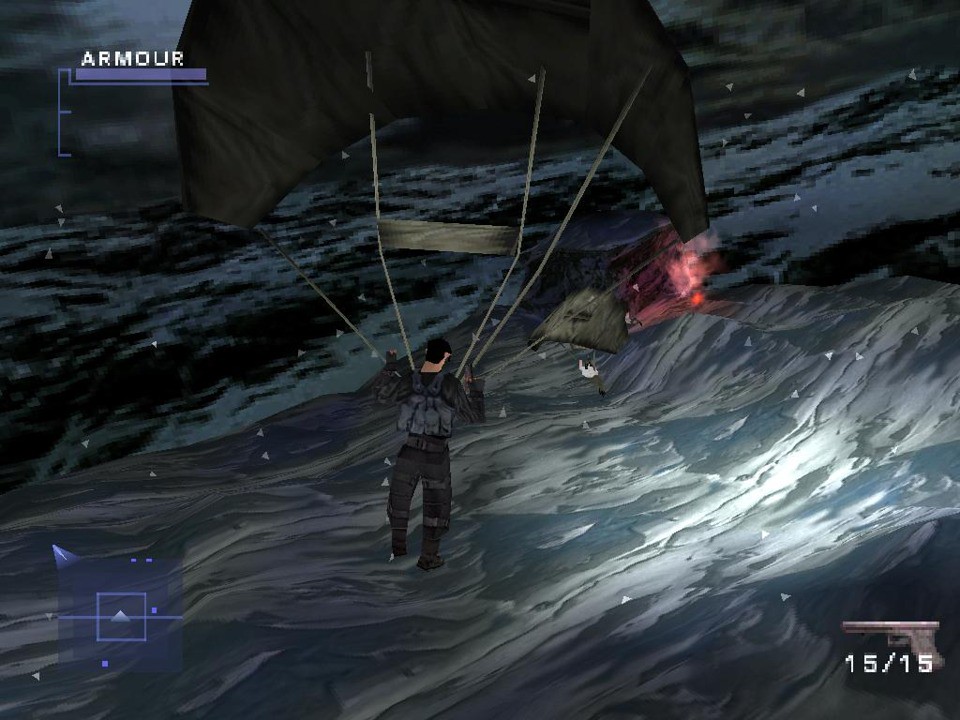 The formula of Syphon Filter continued to evolve through story, design, gameplay, and tech. With each release came more unique missions, providing the player with new challenges and problem-solving puzzles. Starting with Dark Mirror, Syphon Filter’s graphical detail and variety noticeably improved. Each character model’s clothing had tags and buckles, along with variation in footwear. Those same details were applied to the different environments scattered throughout the game. From seeing footprints left in the snow, to dust clouds in Peru, our team took full advantage of the PlayStation Portable’s (PSP) technical capability and pushed the game to its limit, displaying what the platform could do for a player’s experience.

The team turned it up one more notch with the epic finale of Gabe Logan’s storyline in Logan’s Shadow. Logan’s Shadow was the culmination of the Syphon Filter series and displayed the smooth controls, improved gameplay elements, and the deep multiplayer system that continued from Dark Mirror. Bend Studio still regards it as the best Syphon Filter experience. 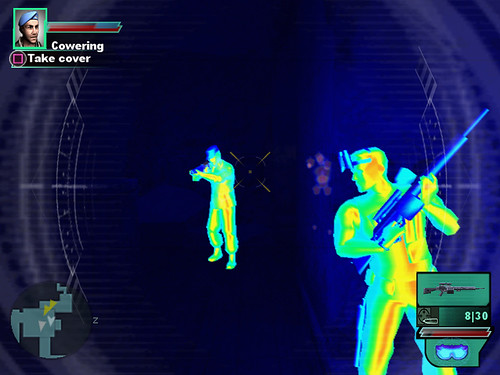 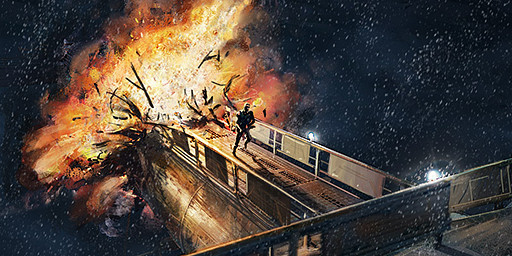 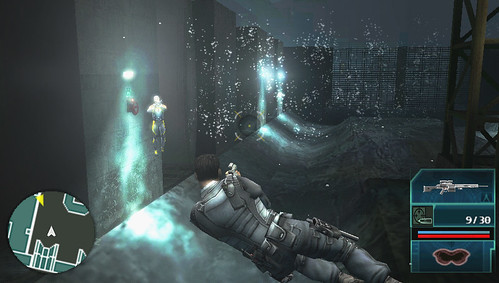 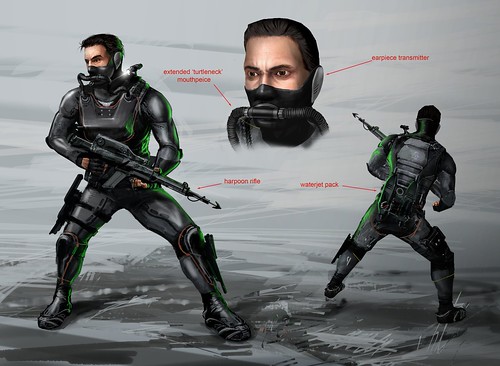 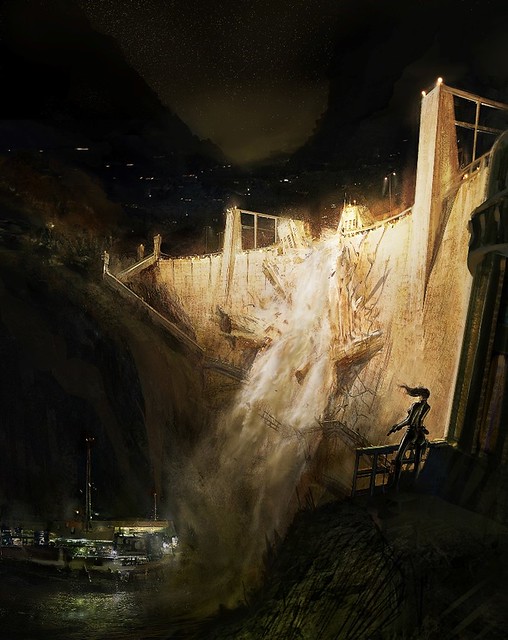 For the first time in ten years, Bend Studio reached beyond the Syphon Filter series to develop Resistance: Retribution for the PSP. Resistance introduced a new protagonist to the series, James Grayson, offering newcomers an entry point to the established series. Grayson immediately became a fan favorite with his stylish bomber jacket, which takes on a deeper meaning for players who finish the engaging single-player campaign. 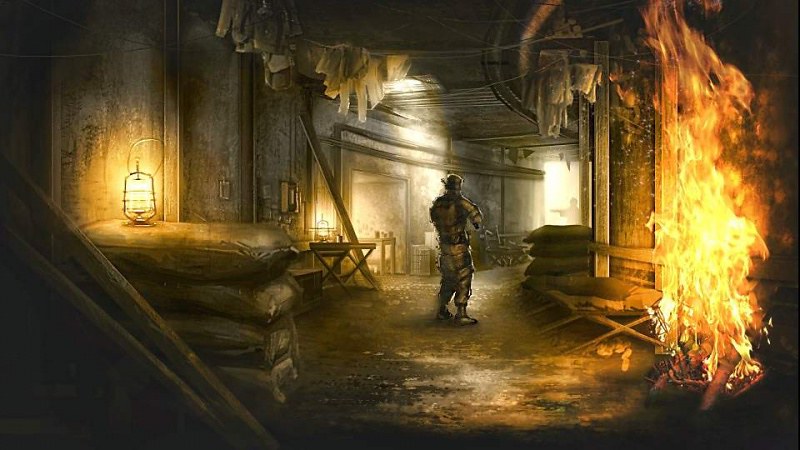 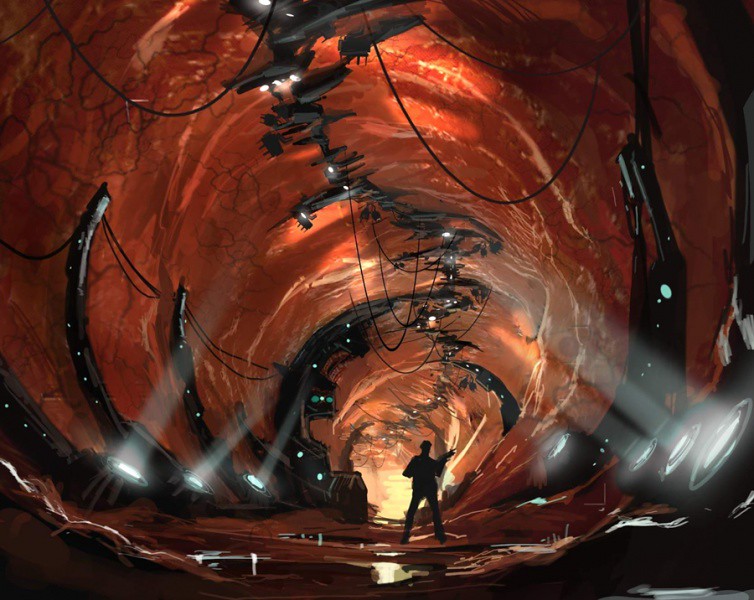 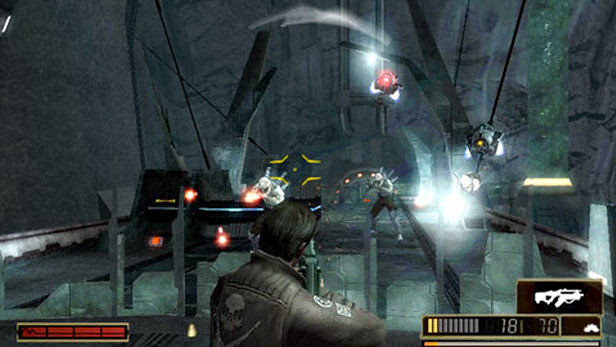 In Resistance: Retribution, we applied our expertise in creating third-person action games to the traditionally first-person Resistance franchise. We further smoothed and improved those controls with added features, such as the Aim Assist box. This feature aimed to give players an accessible playing experience by snapping the weapon’s reticle directly to an enemy located inside the Aim Assist box.

One of the best features implemented in Resistance: Retribution was the PlayStation 3-like multiplayer system on the PSP. It provided a deep playing experience to share with friends, using the PSP to put up to eight player matches into the palm of your hand. The goal was to take the quality of the single-player campaign and merge it with the online system to create one polished experience for the player.

At Bend Studio, we always push technological boundaries to bring unique experiences to our players. With Uncharted: Golden Abyss, we were one of several PlayStation studios that participated in demonstrating the capabilities of the PlayStation Vita, helping to shape the early development of the portable device. To evaluate some of these early ideas for Uncharted-style puzzle solving and aim assist options, our team had to get creative. Early on, this included duct taping together prototype OLED screens with cameras and a DualShock 3 controller. These early experiments helped our team shape and implement the key features that Uncharted: Golden Abyss is known for, such as holding the PS VITA up to a bright light to reveal a mystery from a piece of parchment paper in-game. 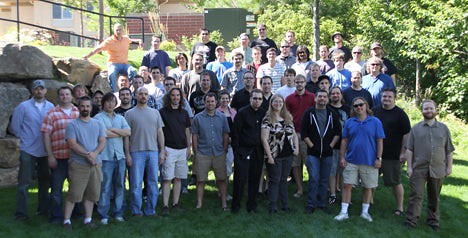 Uncharted: Golden Abyss also gave the studio an opportunity to refine our skills in performance capture. We wanted to bring the same level of quality and fidelity to the PS VITA that Uncharted was known for on console. During this development process performance capture was still relatively new, but we were able to learn from and build on the expertise of our friends at Naughty Dog and PlayStation Visual Arts Teams. 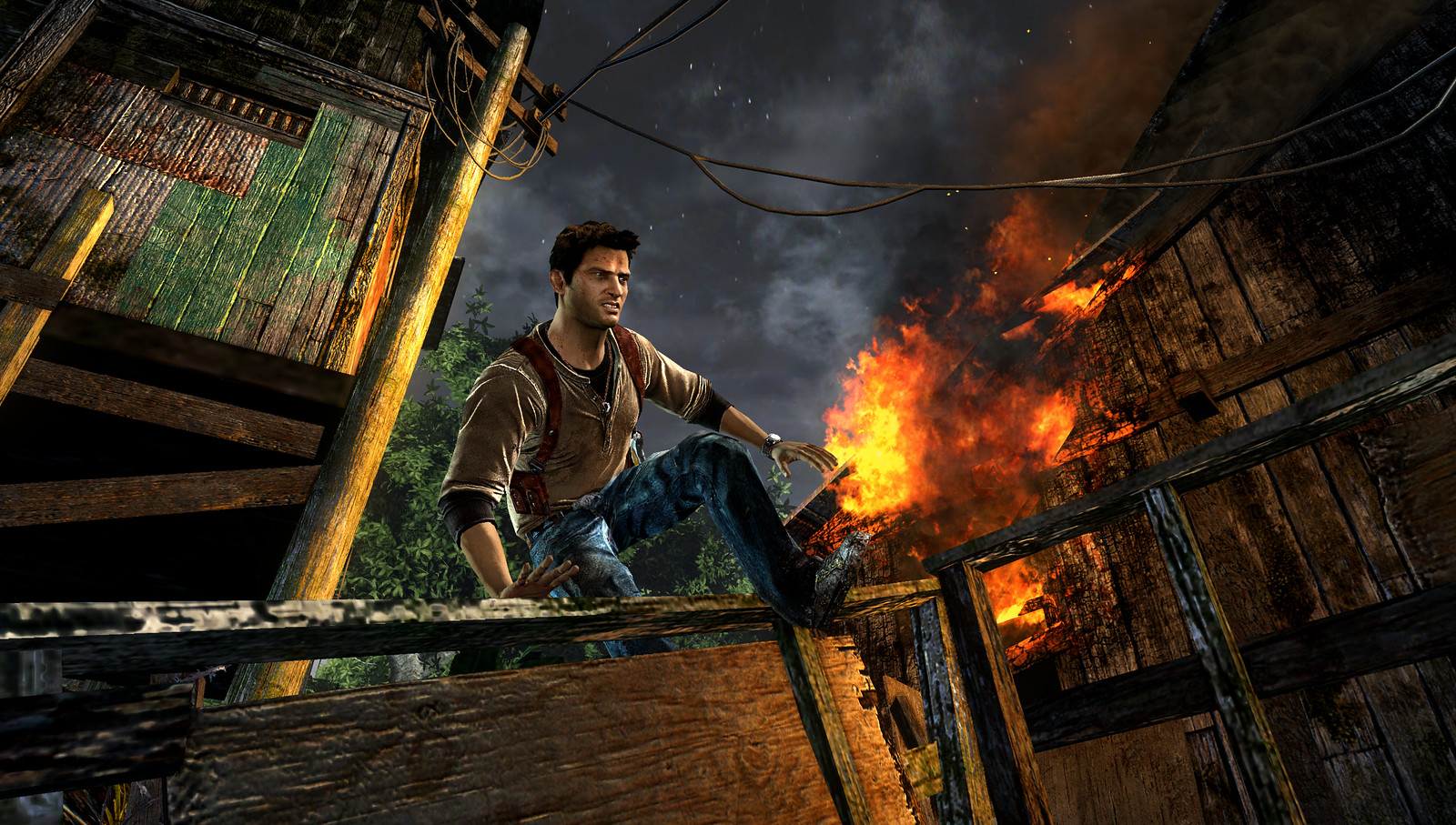 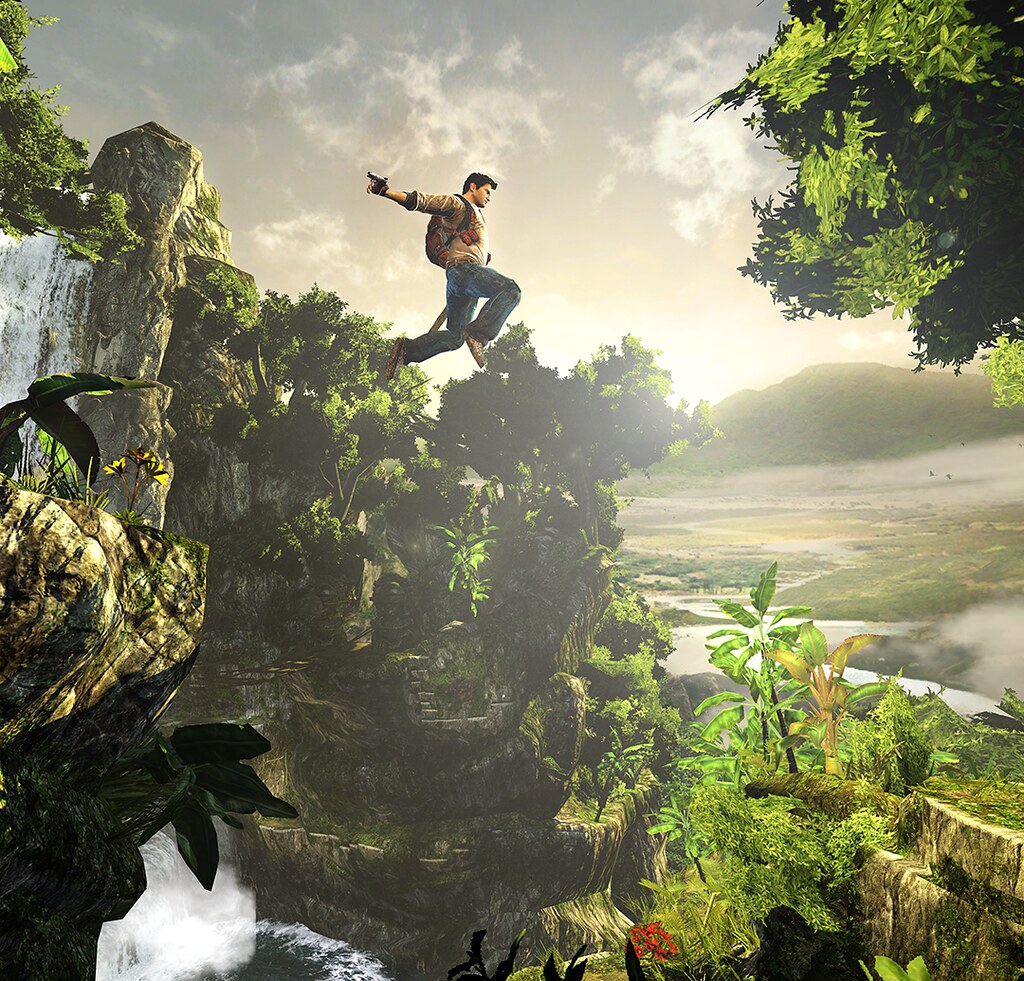 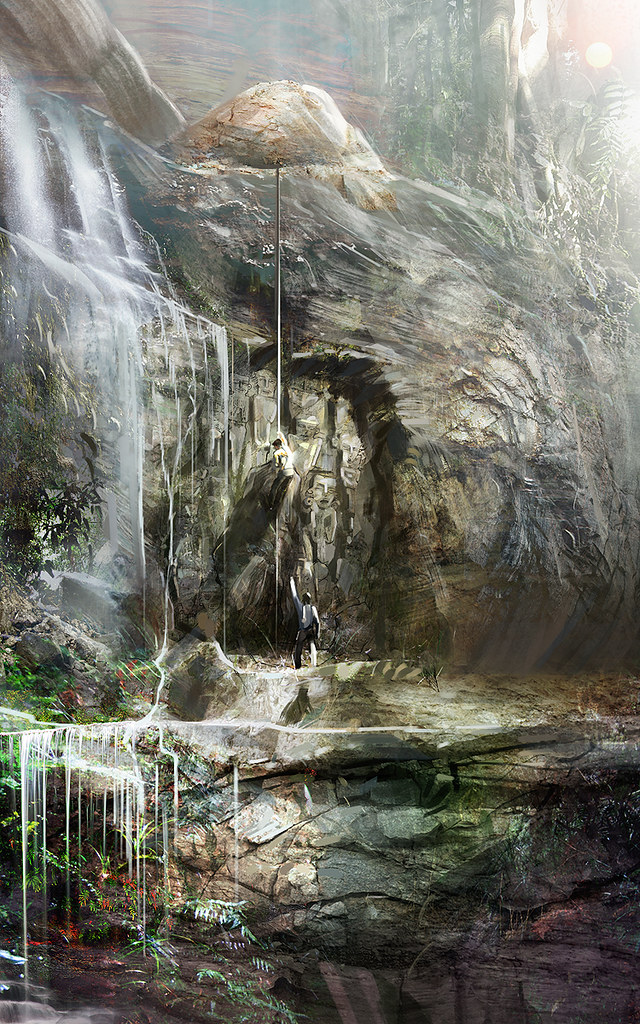 Bend Studio’s first original IP after Syphon Filter produced our most ambitious game yet – Days Gone. Following the launch of Uncharted: Golden Abyss on the PS VITA, the team embraced our next big challenge by creating a dynamic open world with varied systems that launched on the PlayStation 4. Developing a brand-new IP on the next generation of consoles took time, but it showed the capability and talent of our Central Oregon team. 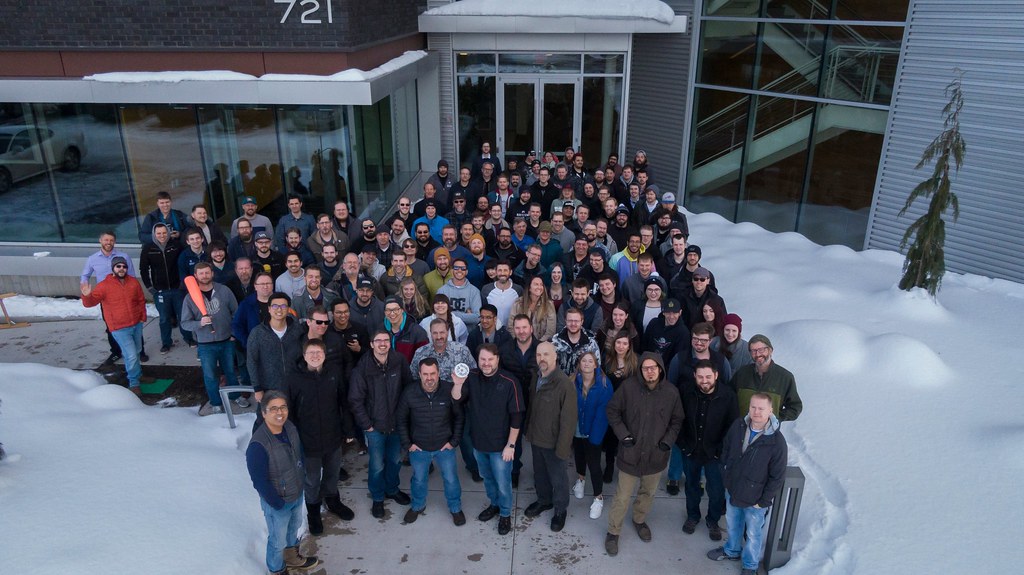 In Days Gone, the bike was a huge developmental shift on how the team approached the entirety of the game. How do you get from point A to point B? What random encounters can you face along the way? If the road is blocked by abandoned cars, what paths can you take off-road to maneuver around it? These were a few of the early questions that we answered while developing this large open world. 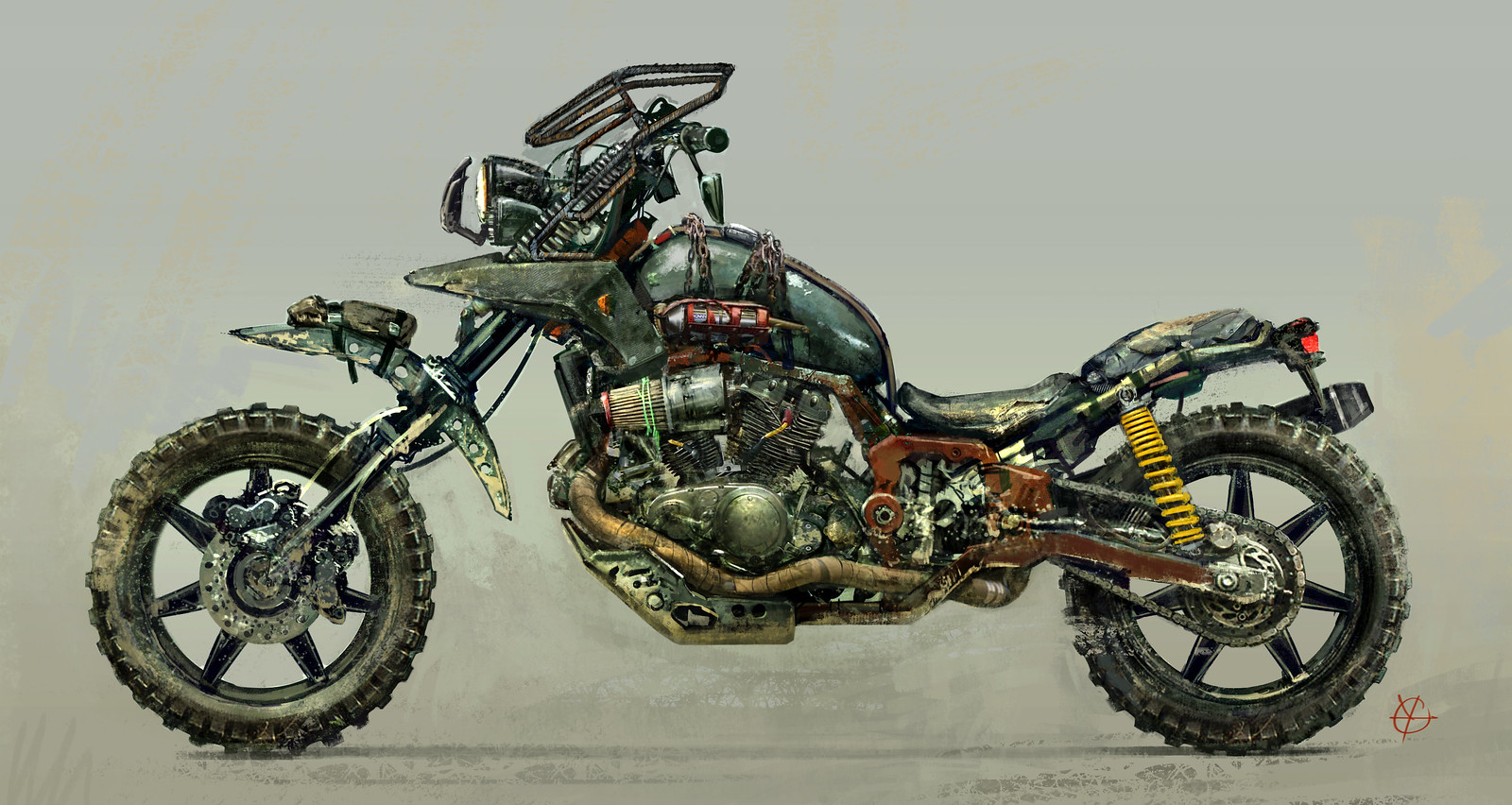 One of the biggest features of Days Gone was the hordes. The hordes pushed the limitations of the PlayStation 4, displaying an impressive number of enemies on screen at one time while showing our advancements in AI. When we shared Days Gone to the world in 2016, we highlighted the largest horde of them all, and it immediately grabbed player’s’ attention. Reactions ranged from “how am I going to face that?” to “wow, that looks like so much fun!” Those emotions were exactly what we were aiming to evoke from players, and where the tagline, “This world comes for you,” stemmed from. 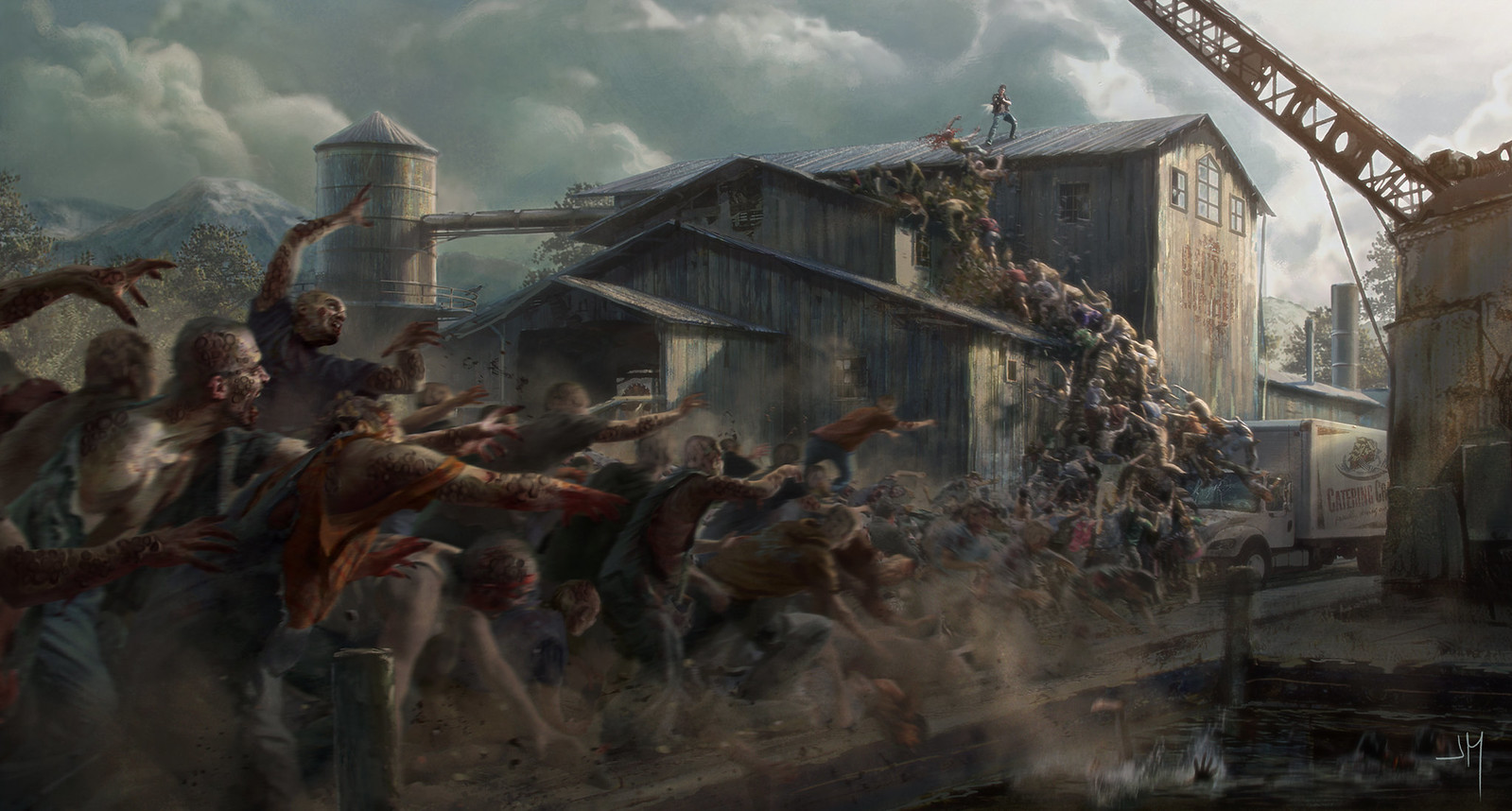 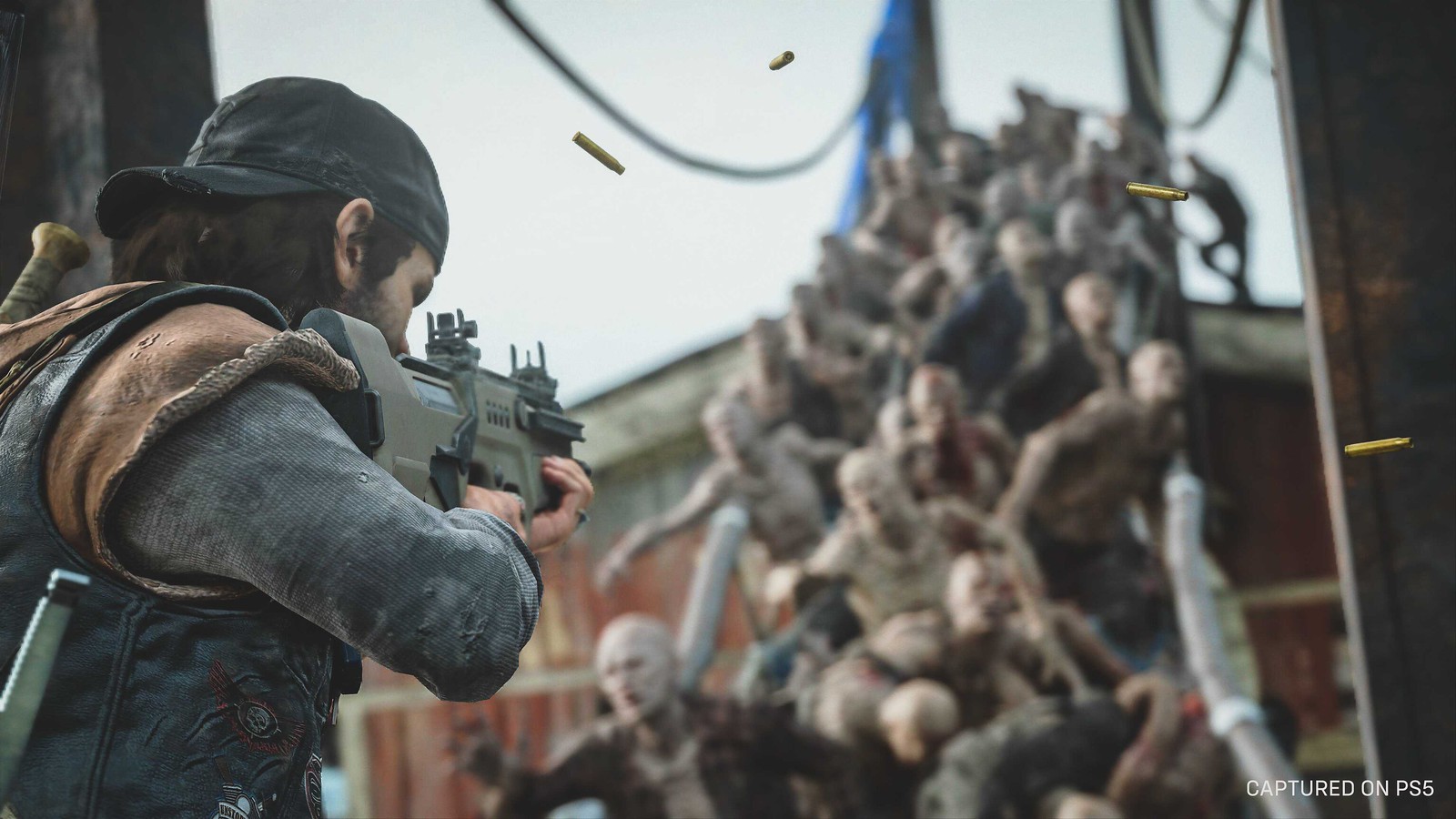 First off, we want to thank our players for all your support over the years. From the Syphon Filter series to Resistance: Retribution, Uncharted: Golden Abyss to Days Gone, your passion for our games continue to inspire us to create and bring new experiences to you. We carry each game we have developed as a badge of honor that reflects our past accomplishments and builds an even better future.

The new Bend Studio logo is just the beginning of Bend Studio’s future. As part of the PlayStation Studios family, we promise to continue bringing you quality experiences that aim to leave an everlasting impact with you. Today, we are excited to share just a snippet of news on our current project. We are currently working on a new IP that includes multiplayer and builds upon the open-world systems of Days Gone, but brings you a whole new world that we are extremely excited to craft for you. We cannot wait to reveal it to you when the time is right.

Come join our growing team and help shape the future of Bend Studio! We are hiring across multiple departments, including options to be fully remote. Visit bendstudio.com/careers to learn more!

Your ride on the broken road begins at PS Store