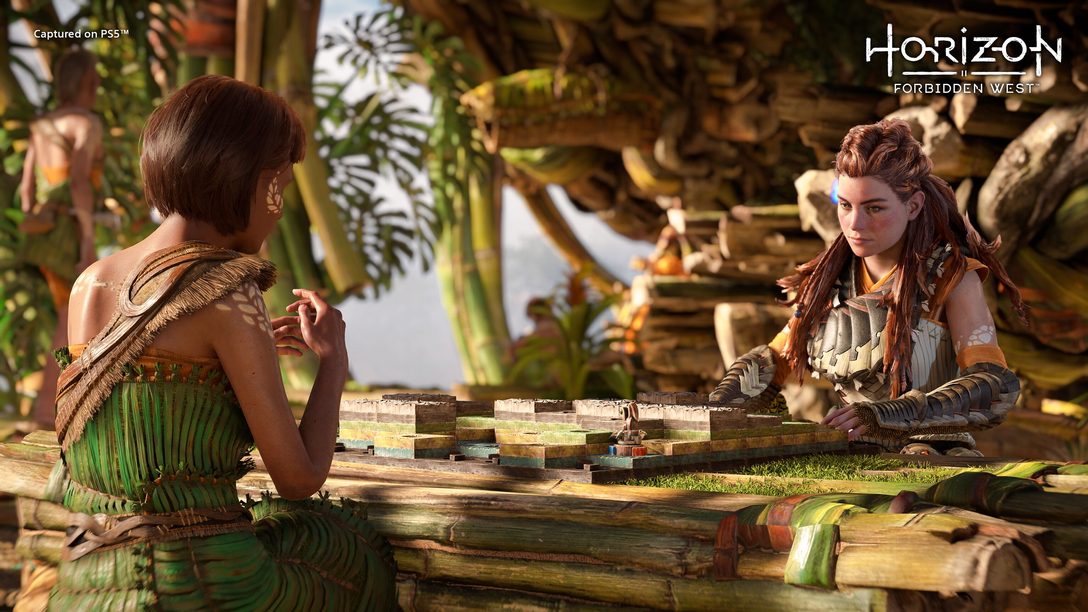 How Guerrilla created a tactical mini-game that adds authenticity and depth to the world of Horizon Forbidden West.

When building Horizon Forbidden West, a massive focus for the team at Guerrilla was making the world feel alive and authentic. To create the feeling of a living world, we offered more ways than ever for the player to interact with it. This meant going beyond just offering breathtaking action and adventure, also including smaller moments that flesh out the culture of the tribes dwelling within the Forbidden West, adding an extra layer of realism.

As Aloy explores this new frontier, she discovers many exciting things to do: Melee Pits in settlements, Salvage Contracts in the wilds, Outposts and Camps teeming with rebels, Cauldrons, Ancient Ruins, and of course: Machine Strike.

Machine Strike is a piece-based board game that Aloy can play against characters across the Forbidden West. In this tactical game, players move miniature pieces representing iconic Horizon machines around the board, ‘battling’ them against one another. Invented by the battle-minded Tenakth, the aim of Machine Strike is to clear the board of your enemy’s machines. To claim victory, the player must not only hold the strongest pieces but also execute a strong strategy. And the further west you go, the more challenging your opponents become.

Bart van Oosten, World Design Lead at Guerrilla, is one of the masterminds behind this mini-game that is new to the sequel. “We started prototyping right after the Frozen Wilds! Many open world RPGs use these types of activities to create immersion into the world, which always speaks to a group of players, so we decided to flesh out the concept from there.’

‘Initially, it was just random cubes with random rules, but we wanted to incorporate individual machine statistics, meaning the board had to be scalable to accommodate those ideas. That’s how we arrived at the tile system. Each tile has an assigned value that influences the stats of any machine piece that lands on them, for example, increased attack from the Grassland tile. Next, we created a paper prototype of the game, which we played a lot! This helped us figure out the ruleset and reasoning. It took us almost a year to finalize the entire mini-game.” 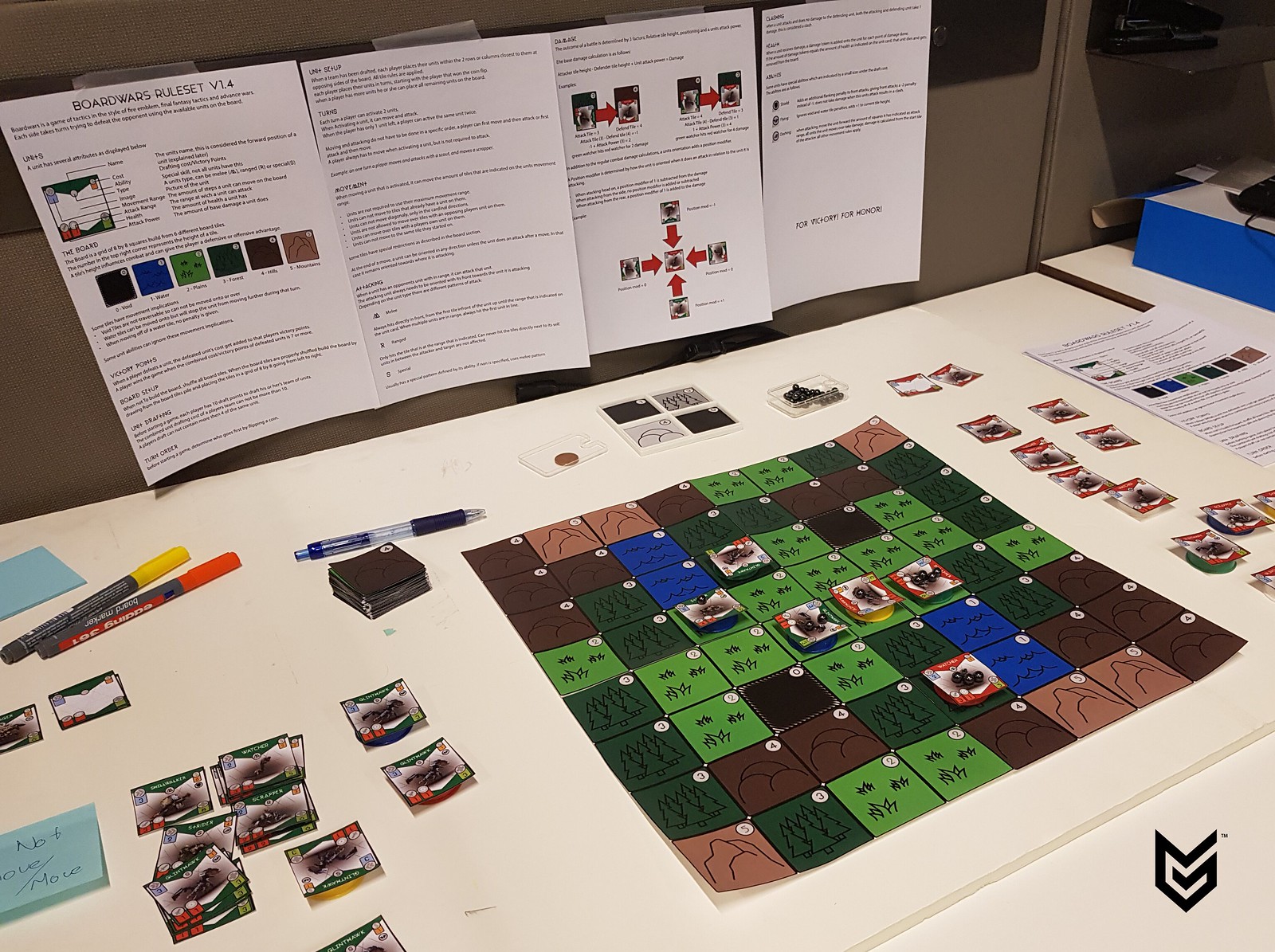 “We stripped back the design to be as minimal as possible. This kept the board overview clear and allowed players to create their own strategy,” says Bart. “Readability was important, so with the art direction, we tried everything from simple discs to ornate designs and landed somewhere in the middle: the game feels like it was made — and played — by the artisans of the Forbidden West.”

Authentically crafted in the Forbidden West

Implementing Machine Strike into the game itself was a collaborative effort between various teams, from AI and Visual Design to Narrative and UI. Concept Artist Christian Auer was part of the team that helped define the visual look of Machine Strike. “All the pieces had to look appealing without being too connected to any particular tribe, as this game is played by a wide variety of the Forbidden West’s inhabitants — whether it’s an Oseram tinkerer or a battle-hardened Tenakth. We also wanted each piece to feel special, like a collectible, so they had to carry some prestige in their design.’ 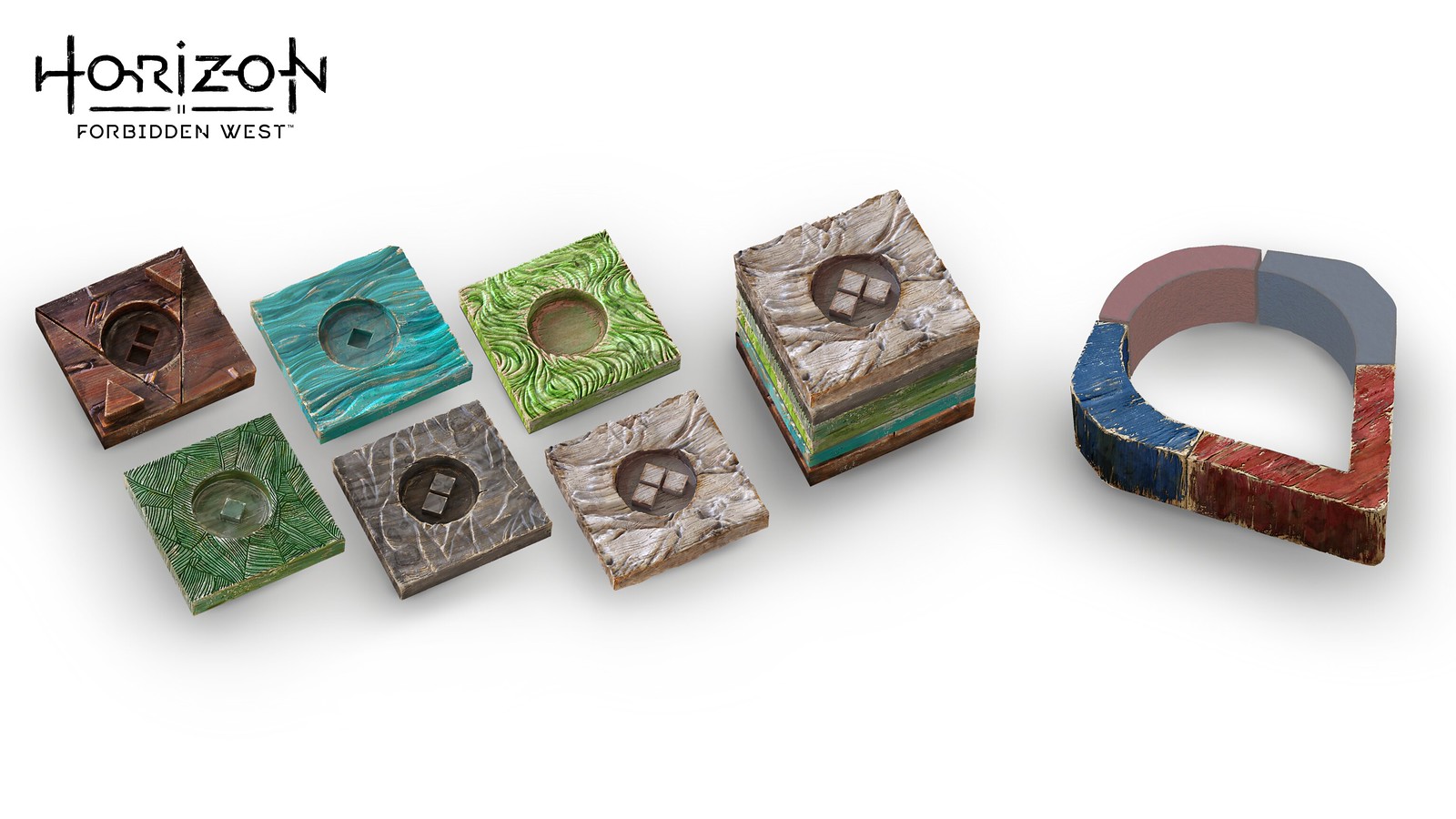 ‘The scale of the pieces made this a fun challenge for us. The metal components on each piece were far smaller than anything else we typically see on our props, so we decided to go for simpler details that enhanced the overall design. The wooden material started much rougher to showcase the traces left by the artisanal tools that carved each piece. However, later on, we decided that the hand-whittled look distracted from the core design, so we ended up with a more sanded-down treatment. This better conveyed our overall goals for the pieces.’

‘We also introduced wear and tear to the pieces so that the wood gradient would not be so monotone. You can see this in how the carvings are lighter in areas with dust buildup and darker at the bottom, where the wood has been burned or waxed. These details help establish the authentic craftsmanship that would have gone into each piece from the artisans of Forbidden West.” 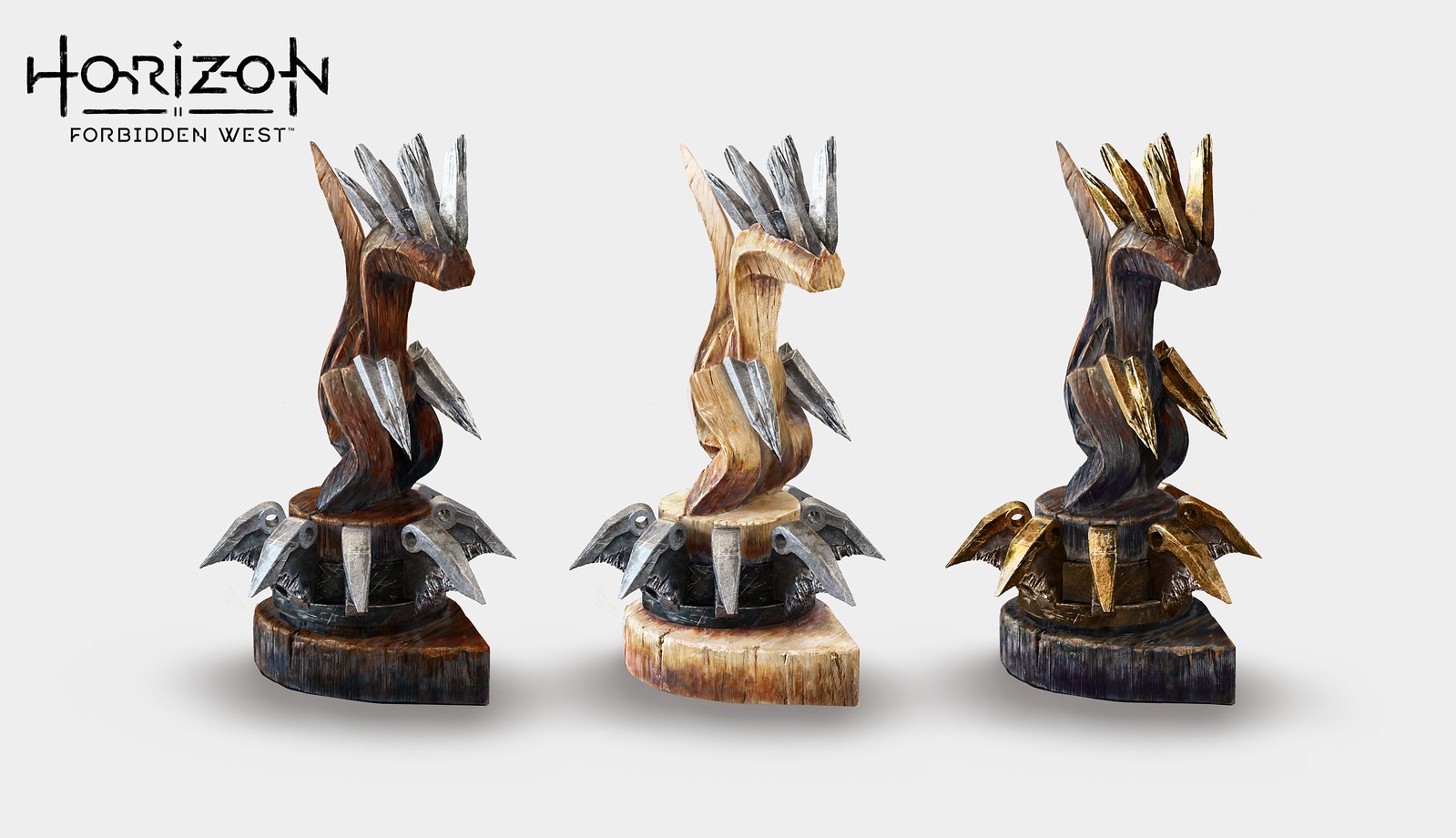 Before Aloy enters the Forbidden West, one of the first settlements she explores is the Oseram mining town Chainscrape. Inside the lively brewery at its center, Aloy can meet Salma, a friendly and upbeat Oseram who’s more than willing to explain the game’s rules. “A tutorial was crucial to get people interested in Machine Strike,” says Bart. “We wanted to make it as casual as possible, like a friend sharing their latest hobby with you over some drinks. Our Narrative team did an amazing job of conveying the information in a warm and understandable way.’

‘As with any board game, there is still a lot of information even though the basics are fairly straightforward. Some people might not be inclined to sit through a long explanation, so we broke the tutorials up into a few parts. The most basic concepts are explained upfront, and the rest are learned through playtime, the glossary, or additional tutorial sessions — you can even press L3 during Machine Strike to get easy access to all this information.”

Ready for a challenge?

Machine Strike is one of the many activities you can stumble upon in the Forbidden West, but it’s one Bart and Christian are particularly proud of. “It’s been great to see people enjoying the game,” says Bart. “I am very happy with what we managed to accomplish and hope many more people will enjoy it in the future. We knew Machine Strike might not be for everyone, so we tried to make its inclusion as unobtrusive as possible.’

‘And if you’re stuck against a certain character, my top tip is always to seek out the best position for your units, be that high ground or getting your pieces out of range. And don’t be afraid to overcharge. As Salma said: ‘It’s often the best way to turn a game in your favor.’”

Christian agrees that it’s been lovely to see our community’s reaction to the game. “As artists, to try and make something look and feel as believable as possible, this was the best reaction we could have hoped for. I’m just glad players are enjoying the game as much as we enjoyed making it!”

The many inhabitants of the Forbidden West are keen to test Aloy’s skills – are you up for a challenge?