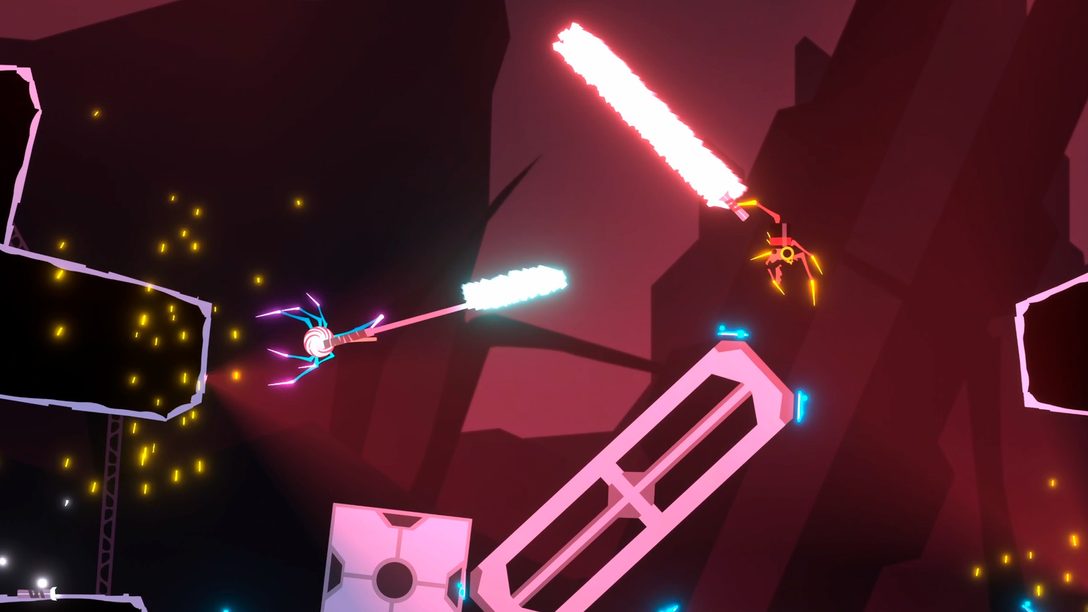 So, how can I describe SpiderHeck to you? In all honesty, it’s so epic, it’s unexplainable. You need to play it for yourself to get where I’m coming from. Because if you put seven-legged spiders (does it make them spiders in this case?), particle blades, laser blasters, rocket launchers, lots of enemies and your friends together, and top that with the physic-based environments and battle mechanics, mind blowing web slinging parkour moves and close calls – that sounds like a crazy hectic game.

But it’s the chaos that makes SpiderHeck so much fun! As the saying goes – a picture is worth a thousand words, so check out the new gameplay trailer below.

You play as one the awesome spiders and your main goal is to survive for as long as possible. Use your surroundings, a vast weapon arsenal and web slinging skills to overcome your foes (and even friends).

You can also customize your spiders by adjusting their colors and hats to battle in style. 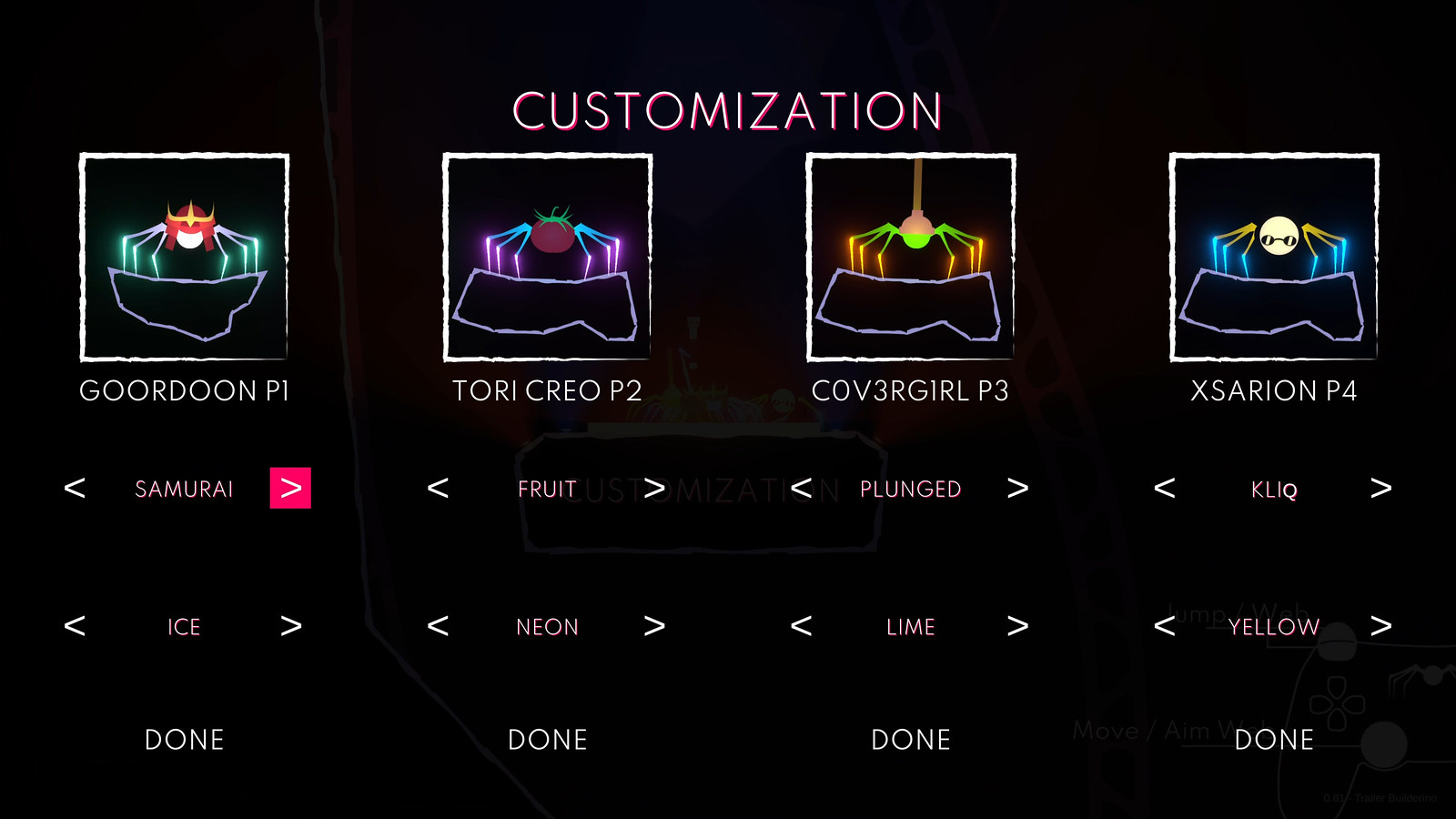 SpiderHeck features several maps and arenas to battle. Some of them are relatively simple and static, while others feature moving elevators, floating islands and lava walls all around the place! And let’s not forget that spiders can end up in zero gravity levels?!

As I mentioned before, your main goal is to survive and become the last spider crawling. So, let’s talk a bit about the enemies.

Trust me when I say you’ll never get bored trying to survive as many enemy waves as possible. The variety of foes and their abilities in SpiderHeck will put your skills to the test every time you play. Get ready to fight back against enemies with both close-range and long-range attacks.

Take this enemy called Whisp for instance. It zips around in an unpredictable way until it decides to focus on you and blast you with its weapon. It can get pretty stressful when you are facing other enemies, and all of a sudden you see a Whisp start charging its cannon aimed at you.

Another example of the enemy you will encounter is called Kherpi. This huge bug is using a homing sphere that follows you around the level. Try to avoid the spheres and destroy the bug by hitting the glowing part on its back. You can also deflect the spheres with your particle blade to make them follow your enemies! That is a nice way to make some allies.

In SpiderHeck you’ll be able to choose from many different types of weapons and master them to become victorious.

Sure, using shotguns and rocket launchers are fun and all, but the main spider weapon is a particle blade.

Swing it like you mean it, deflect the shots, or even stick a grenade to your blade and throw it towards the enemies. The possibilities are endless! Master the dual blade or a spear-like blade to become the real heck master.

Just like all the other weapons in the game, particle blades also have limited durability. They shrink after each hit, so keep your many eyes out on it and don’t end up with empty legs.

SpiderHeck features a lot of different game modes for you and your friends to enjoy. Let’s take a closer look at some of them!

The name speaks for itself. Your goal here is to survive for as many enemy waves as possible. You can take on this challenge on your own or invite your friends to join you. Play with up to four spiders in a couch co-op local multiplayer or play together online with PlayStation Plus. You’ll have a limited number of lives, but as you progress through waves, you’ll be able to select from special modifiers that will enchant your abilities and even the odds. 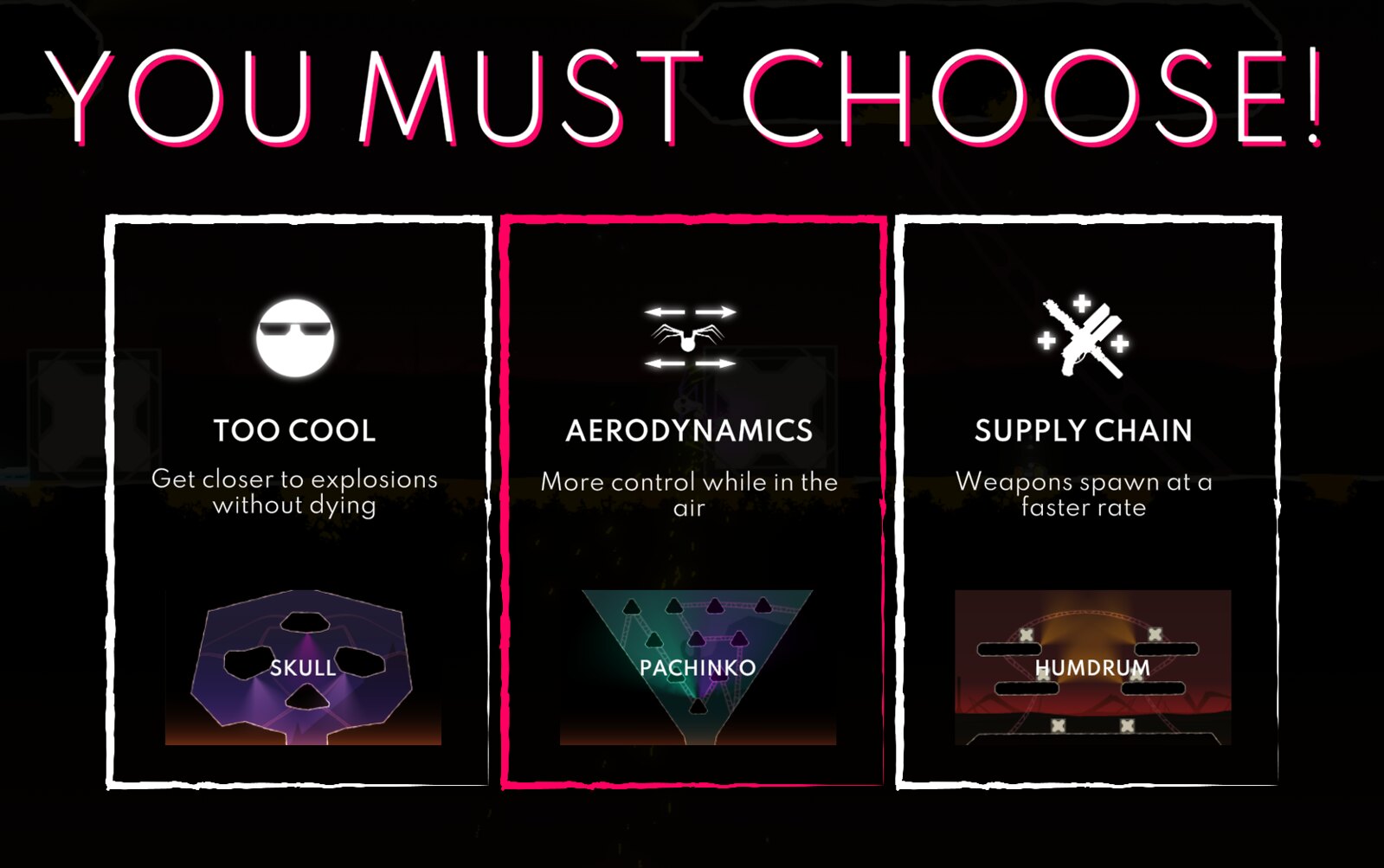 Can’t wait to swing that particle blade and show everyone who is the heck master here? Then join the quick game and find random opponents online. The first spider to score the required number of points is the winner.

Battle against other players or your friends and become the number one spider! You can adjust many different match settings such as limit the available weapons, disable maps, and even decide which modifiers are going to be available.

We’re also introducing a brand-new mode called Tiers of Heck. This is a single player only hardcore version of the wave survival mode. This mode will put all your skills to the test as you will face ever increasing waves of opponents and you will be limited with only one life, so any mistake can be your spider’s last one! This mode also includes special conditions, like rising lava, limited ammo, only explosives, and many other things that will make your spider’s life even harder.

And there you have it! I hope you enjoyed this little preview of the game. SpiderHeck will be coming to PS4 and PS5 later this year and we can’t wait for you to swing around the levels performing some incredible moves and creating moments to remember forever.

Let us know what you think in the comments below and I’ll see you in the arenas.