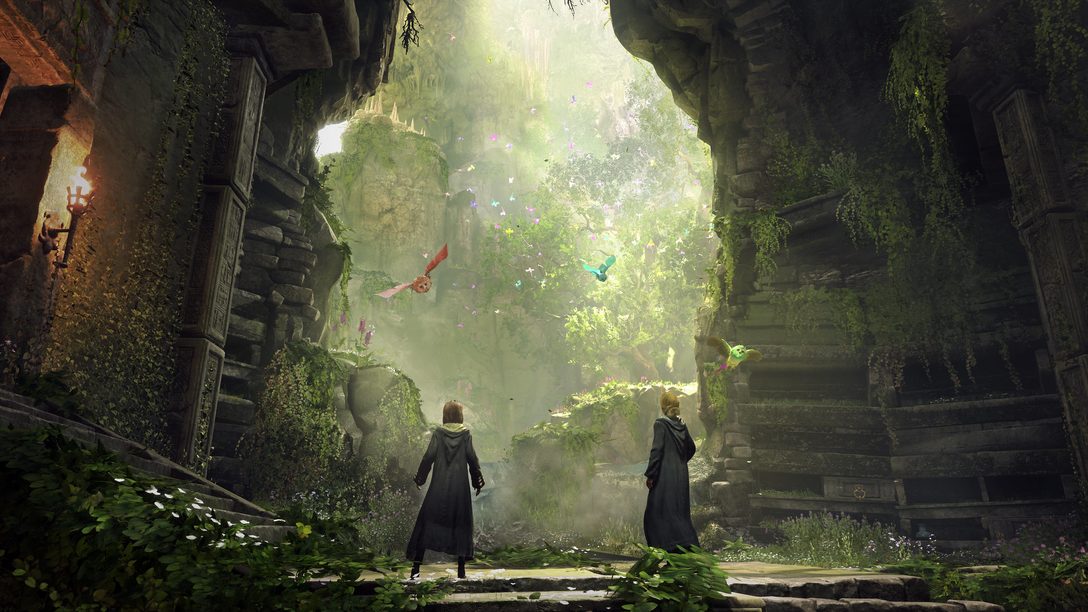 The DualSense wireless controller connects you directly with your wand, immersing you in visuals and sound.

With Hogwarts Legacy, we wanted to immerse you in the wizarding world like never before. Wand in hand, nothing is more important at Avalanche Software than making sure players feel like they are living in this world. PlayStation 5 allows us to take that immersion further as you build a legacy of your own.

Connect With Your Wand

A witch or wizard should never be without their wand, and the PlayStation 5’s DualSense wireless controller becomes an extension of your wand in Hogwarts Legacy. With so many spells at your disposal, the adaptive triggers allow for more flexibility in combat. You’ll feel the magical resistance at your fingertips through every spell, whether firing off a basic cast or summoning the strength for a more powerful charm.  Spells will feel unique when you cast them, thanks to haptic feedback providing a direct connection between the DualSense controller and your wand. We’ve specifically isolated these effects to the right side of the controller to let the DualSense become an extension of the wand you hold in the game. And when you deflect a spell with Protego, you’ll feel the sizzling of the magic being reflected and absorbed by the Shield Charm.

Adaptive triggers and haptic feedback aren’t just limited to spellcasting and wand work, however. The DualSense controller lets you feel a variety of events throughout the world, whether it’s crushing ingredients with a mortar and pestle in Potions class, feeling the screech of a Mandrake seedling, or flying through the skies on a broom or a hippogriff. The DualSense is your connection to the magic on PS5.

We’ve also tapped into the DualSense controller’s light to give you a unique bit of personalization. When not flashing along with spells being cast or damage being taken, the DualSense controller lights will pulse with the colors of your Hogwarts house: blue and bronze for Ravenclaw, scarlet and gold for Gryffindor, green and silver for Slytherin, and yellow and black for Hufflepuff.

Sights and Sounds of Hogwarts

Visually, we’ve come a long way since the days of the beloved Hagrid on the original PlayStation. Hogwarts Legacy on PS5 lets you take in Hogwarts and the surrounding area in stunning 4K, as well as a choice between Fidelity and Performance graphics modes. This choice will allow you to create your preferred experience, whether that’s prioritizing a higher framerate or visual fidelity.

The PS5 console’s Tempest 3D AudioTech will put you right in the heart of the wizarding world. Hear the crackle of fire as you cast Incendio, potions bubbling in cauldrons, and the uniquely detailed soundscapes of each environment to really make you feel present. And if you play without headphones, you’ll be treated to additional immersive sounds through the DualSense controller speaker, like the soft flap of a Hippogriff’s wings and effects of each spell you cast.

Additionally, expect the PlayStation 5’s ultra high-speed SSD to provide quick loading times no matter how you choose to move from place to place, whether you take the scenic route on a broom or fast travel via the Floo Network. We’ll also support the PS5’s Activity Cards and Game Help features.We’re thrilled to connect you with the wizarding world in a more immersive way than ever before thanks to the PS5 and DualSense controller when Hogwarts Legacy launches Holiday 2022.