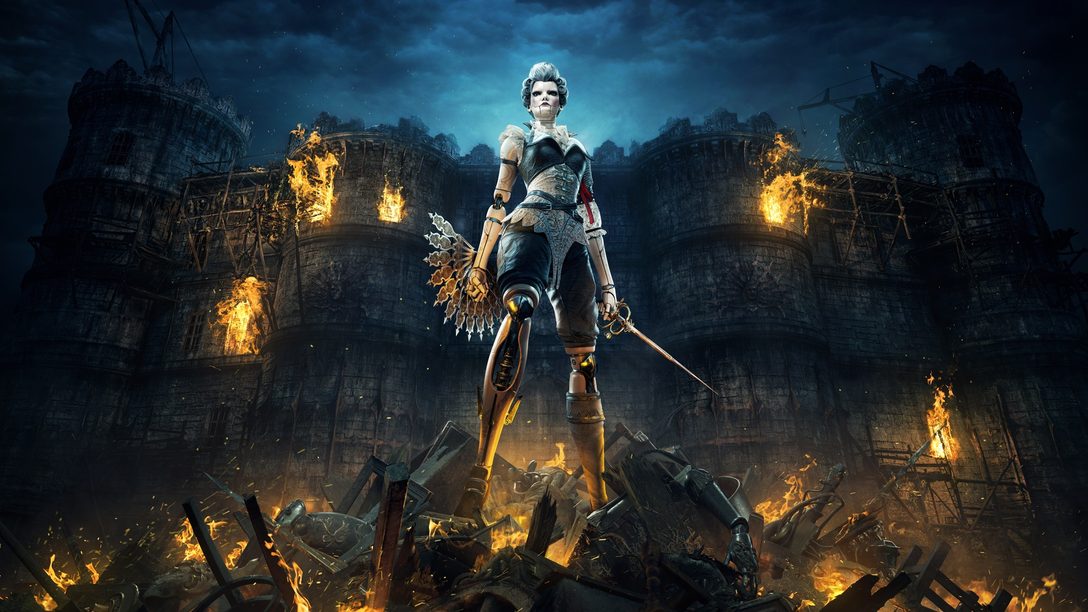 Learn all about this mechanical main character and leader of the revolution.

We’re back with more inside info on Steelrising, coming to PS5 on September 8. Last time, we talked about our quest to develop an action-oriented RPG. This time we’ll be looking at the origins of our protagonist. In Steelrising, you play as Aegis, a unique automaton that will have to face an army of machines created for King Louis XVI, the Clockwork King.

Let’s kick things off with some top-level stats:

Even before we decided that Steelrising would take place in the 18th century, we had already envisioned an automaton protagonist. Indeed, the possibilities offered by having a machine, capable of rebuilding itself at will or improving its mechanics as it progresses, seemed to fit well for an action-oriented “soulslike” game, where death is an integral part of the learning curve.

Originally, our automaton was called Ada, in double reference not only to the idea of creation, Ada being our Adam, but also in reference to Ada Lovelace, the first programmer in history. Over time and as our universe developed and became anchored in the French Revolution, Ada became Aegis, this time in reference to the aegis, the shield that Athena wields to protect Zeus.

Meanwhile, the art team was thinking about what this machine would look like. There were many influences, but two in particular stood out: “La petite géante” (the little giant) from “Les Machines de l’île (an installation in Nantes) and “La Joueuse de tympanon” (the dulcimer player), the latter also happening to be a product of the 18th century. 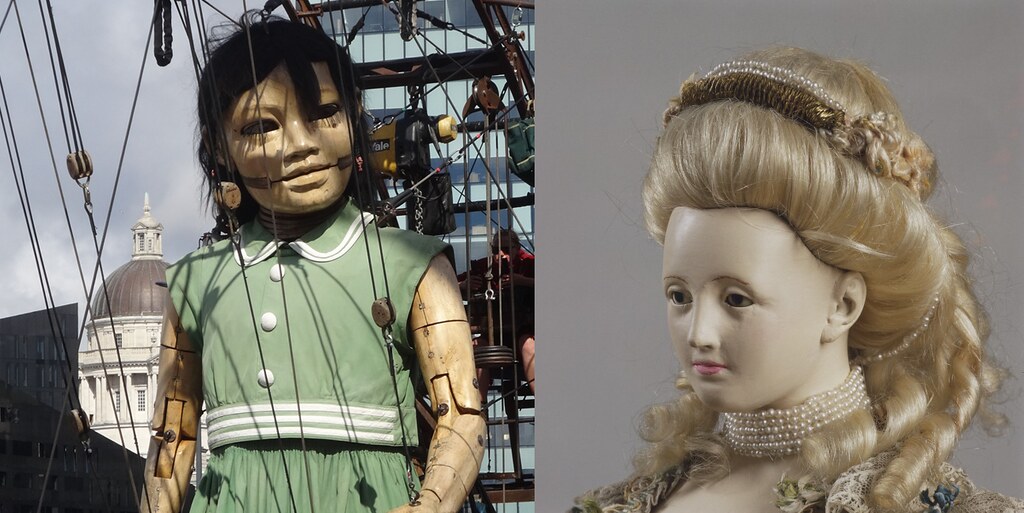 On the left, La petite géante and on the right, the dulcimer player, two sources of inspiration that helped Aegis to come to life.

Beyond the mechanical aspect, which reflects the ability to upgrade and rebuild, we also wanted to infuse the character with grace for gameplay reasons: we wanted to incorporate fast-paced, aerial gameplay elements, and verticality. Thus, it was clear to us that Aegis had to be an agile and elegant character. 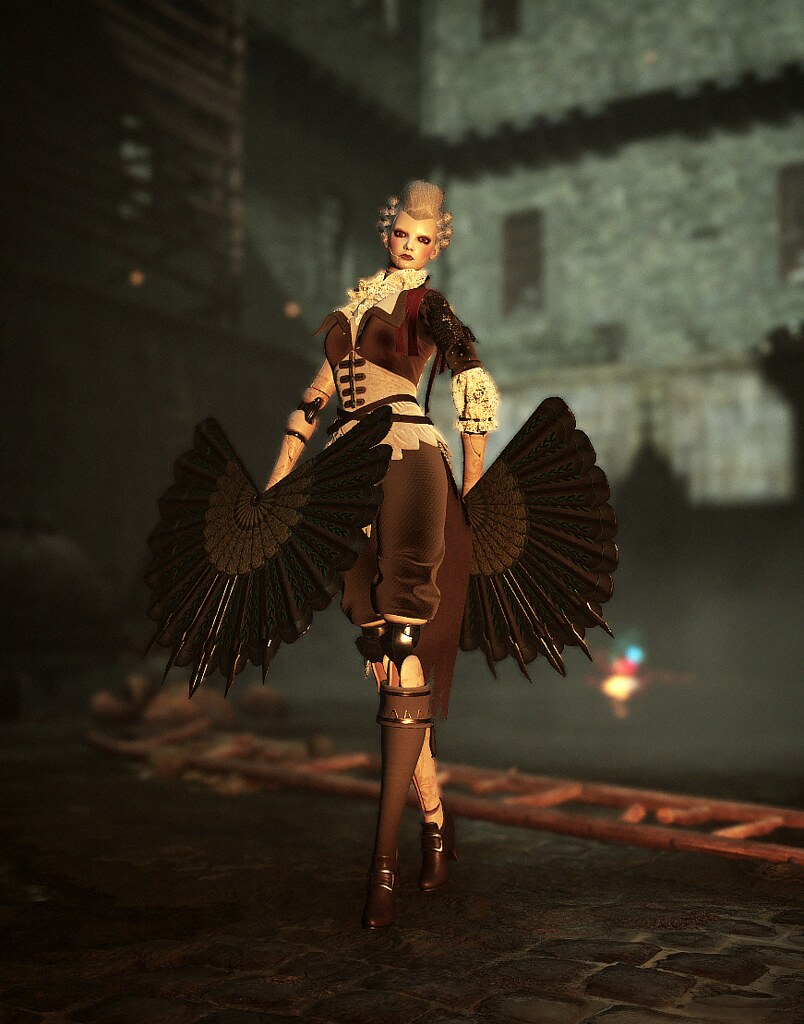 Aegis deploying her Armored Fans’ blades. Inspired by the fans so beloved by aristocracy, they deliver lightning-fast barrages of cutting attacks.

By association, we thought about music boxes and their little mechanical ballerinas. As well as fitting the story of the character – who was originally an automaton dancer – we found this reference interesting as it added a sense of apparent vulnerability and graceful delicacy in keeping with our vision of the character, creating a contrast that was all the more striking when she sprang her weapons from her body, the petite ballerina becoming a graceful machine of death.

Aegis is resourceful. Every weapon emerges from her own body.

Being a machine, we were able to give her exaggerated, unnatural proportions and emphasize the mechanical, unhuman nature of her movements. We could also give her a range of motion, especially in combat, which accentuated the aerial gameplay. 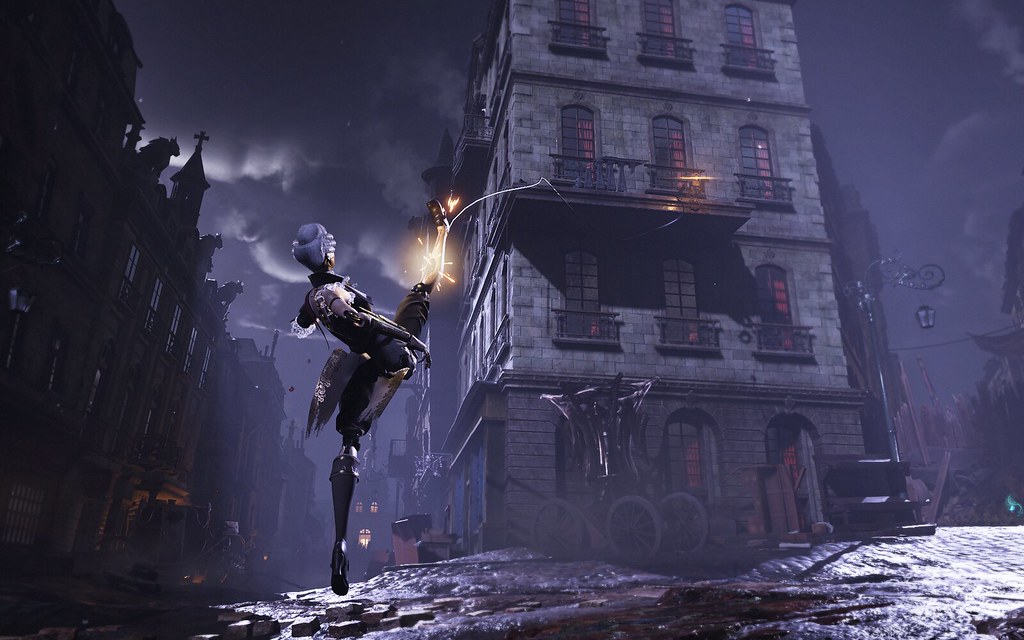 The grapple is also part of the Aegis body. It is not only useful during exploration but can also be used as a weapon in battle.

In addition to being an outstanding fighter, Aegis is also an incredible acrobat.

Finally, the contrast between Aegis’ delicate form and her heavier, more imposing enemies would underline her uniqueness in our world. 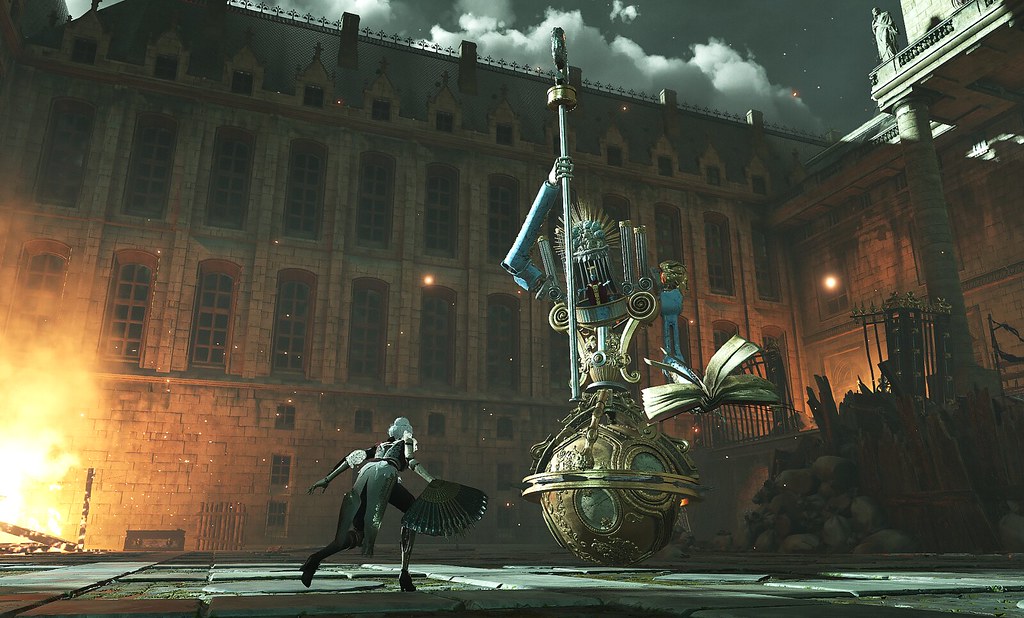 Like David’s courage against Goliath, Aegis steps forward with no fear to defeat the Bishop of the Cité.

Aegis will also be partly customizable: you can change her wig, her facial features, and the material of her body.

Of course, the story of how she was created by our team reveals nothing of the story you will discover over the course of the game and the various struggles she will have to overcome. For our automaton is a singular masterpiece, and as such, the secrets behind her existence are many.

So we won’t be revealing more for the time being. We can’t wait for you to become Aegis and step into Steelrising when it releases on PS5 September 8.