Tips & tricks to dominate the night in Bloodhunt, out tomorrow 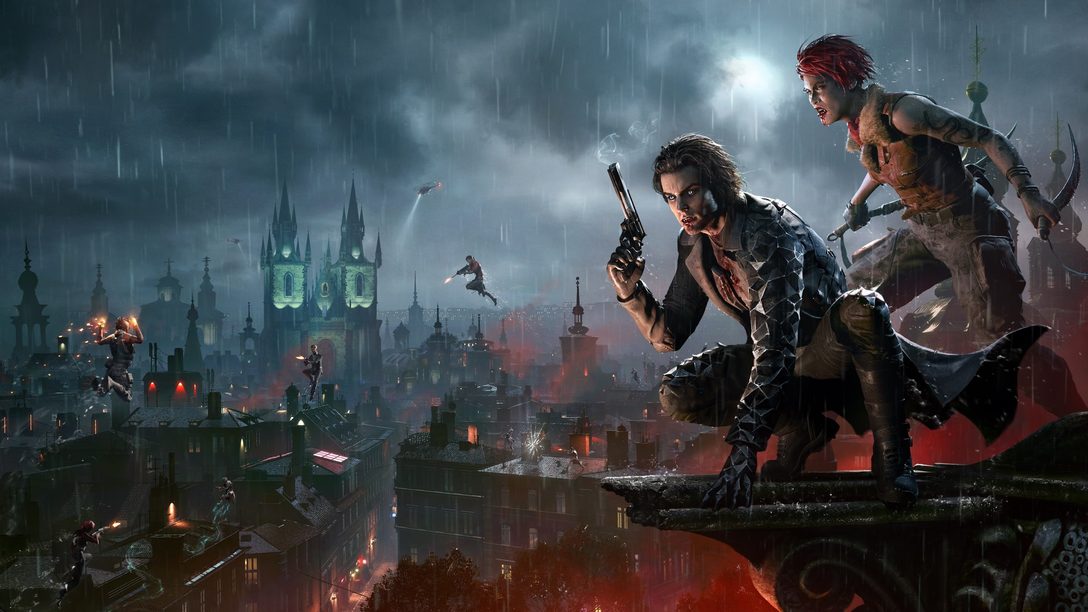 Sink your teeth into a new genre of battle royale when this free-to-play drops on PS5 April 27.

At its core, Bloodhunt is a multiplayer Battle Royale. That is, a group of players duke it out until a single warrior is left standing. There are many games in this genre on the market, but there are a few core things that sets Bloodhunt apart from the competition and makes for unique gameplay opportunities.

So gather around! We are about to spill a few secrets on how to increase your chances of surviving the night in Bloodhunt when it hits PS5 on April 27.

Bloodhunt takes place in the Vampire: The Masquerade-universe, where vampires exist among the living but are sworn not to reveal their true nature. Any super-human or monster-like behavior will attract the attention of mortals. This means you have to be careful, as drinking blood in front of a mortal witness will trigger a Bloodhunt.

Generally, a Bloodhunt is initiated when a vampire breaks the rules of the Masquerade. That is, if they reveal their true nature to one or more mortals. This could include a mortal witnessing a feeding or the use of supernatural powers. In Prague, this Bloodhunt is only temporary. Survive, and the Bloodhunt will be called off.

Killing civilian mortals is also prohibited and will trigger a Bloodhunt. Feel free to kill and suck dry as many Entity soldiers as you can, though.

Vampires have enhanced senses that enable them to be more aware of their near surroundings.

Looking for a human with a specific type of Blood Resonance, or if there are any nearby weapons? No problem! You can activate your Heightened Senses at any time to scan your surroundings and find the resources you need to survive the night.

Drinking blood is crucial for a vampire’s survival, but all mortal blood is not the same. Depending on what mood the mortal is in, their blood gives vampires unique boosts. This is called Blood Resonance. In Bloodhunt, there are four types of Blood Resonance:

Not all mortals have resonant blood. If a mortal doesn’t have a colored aura, they can still restore your health, but you won’t get any special boosts.

Additionally, when playing Bloodhunt Mode, you might come across certain humans that grant you an Extra Life. You can only pick up this Extra Life you have lost one life already. By default, you are only able to have one Extra Life at any given time. When you are about to destroy opposing vampires, you can choose to commit diablerie. This not only gives them their final death but also means you consume their soul by drinking their Blood.

As this move requires you to get up close and requires a bit of time, it might be a risky move. However, the XP gained and the extra Blood Resonance slot makes this brutal finishing move worthwhile.

Some weapons in Bloodhunt have special abilities for you to learn and utilize. For example, the Katana can deflect bullets and the Scourge Blades enables its users to do a special dash attack. Learn to use these weapons to your advantage to surprise the enemy.

The Entity and finding the best weapons Bloodhunt has a lot of weapons, but not all of them are of the same quality. The best ones are purple and golden weapons, but unfortunately, these are usually found in areas heavily guarded by the Entity.

Get familiar with where the Camarilla caches and Entity Strongboxes that spawn these weapons are, and combat or sneak past the Entity to get to them. They are well worth the effort and can mean the difference between unlife and final death in combat.

Either way, it’s always a good idea to kill as many monsters as you can…

And with that said, we think that you are now ready to dominate the night. Until next time, see you at dawn!