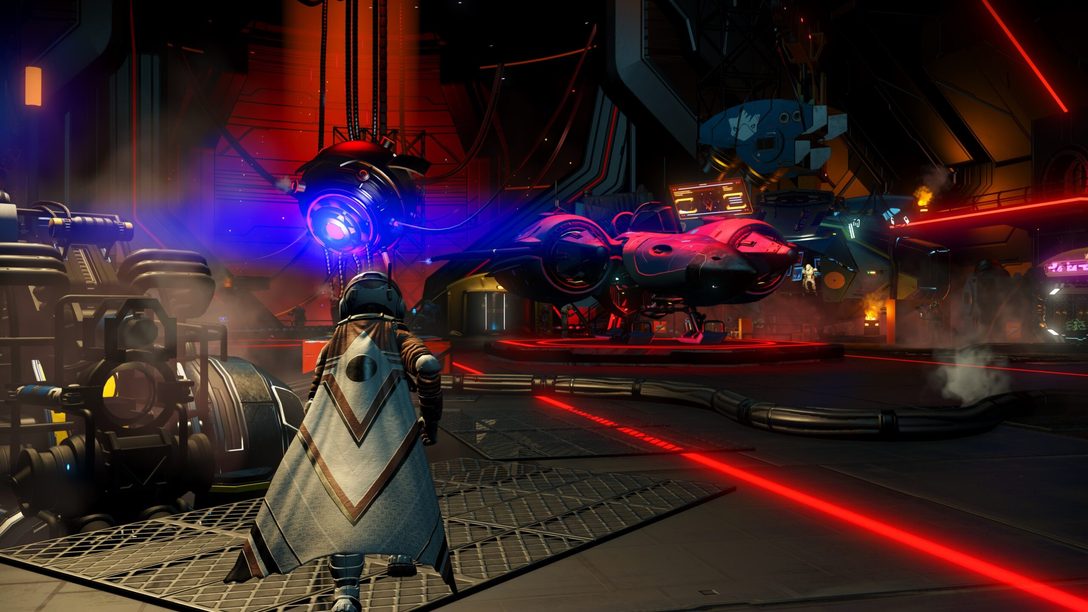 Square up to the increased pirate threat with the promise of earning the first new ship in years.

Last month saw our first major No Man’s Sky update of 2022, the Sentinel update, and it’s been so exciting to see our PlayStation community powering up their combat mechs and joining the fight against these new threats and challenges in such large numbers.

Today we’re pleased to announce our next and 19th update! The Outlaws update launches today across PlayStation 4, PlayStation 5, and PlayStation VR, featuring smuggling, improved space combat, your own recruitable squadron, a new expedition, and the introduction of the first new starship to No Man’s Sky since the Living Ship two years ago. 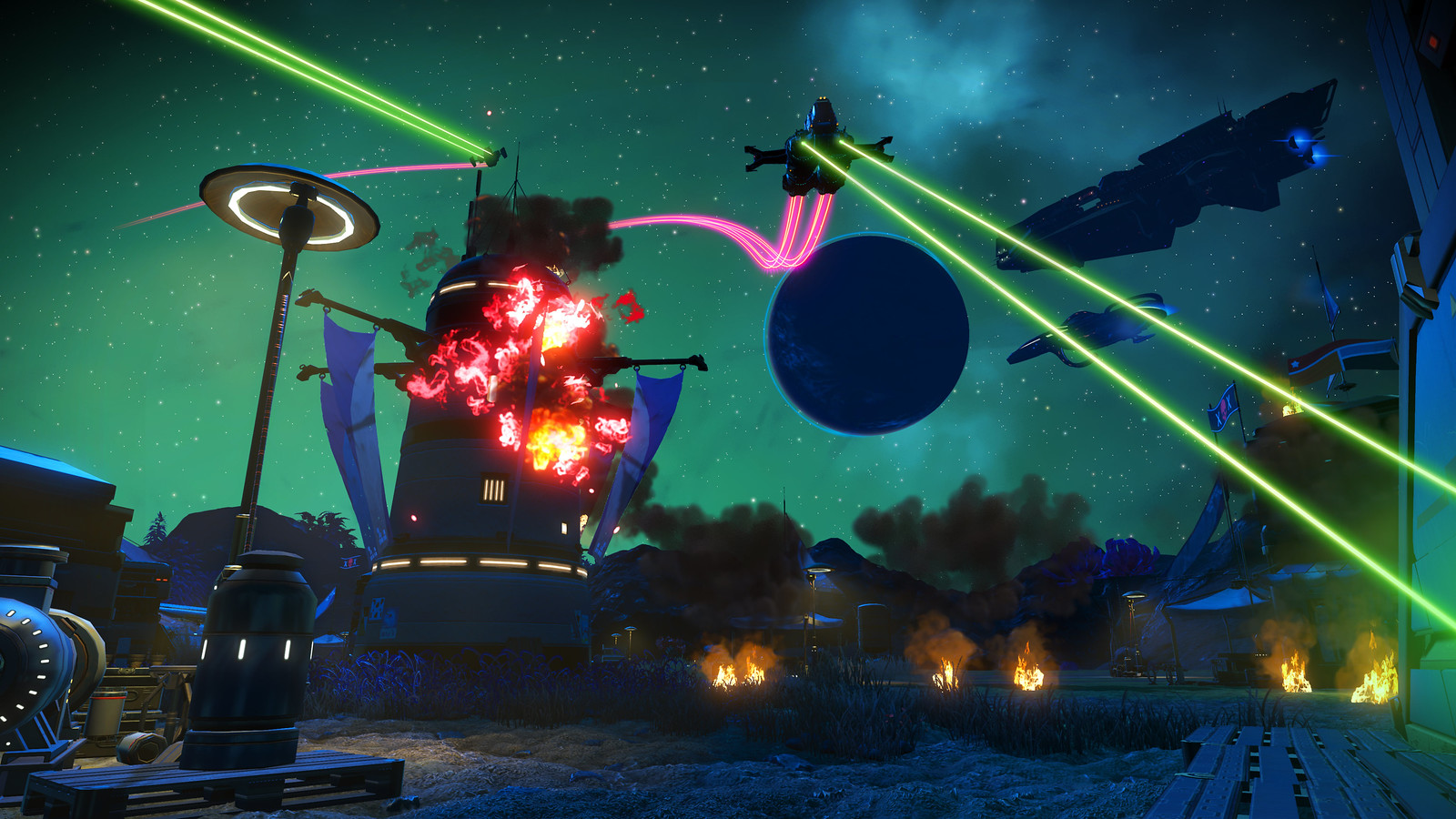 Pirates have taken over space stations all across the universe, using them as bases from which to conduct smuggling operations and attacks on neighboring planets and settlements. Players have a choice: join them as renegades and assist them in their nefarious activities, or take them on head-to-head in the newly rebalanced and dynamic space combat.

Fortunately, you are not alone in this fight. Players can now recruit their own squadron of pilots, who will warp in and join the fray as needed. Explore the galaxy to find your perfect wingmen, or upgrade your loyal crew from their humble beginnings into an elite unit.

At the heart of the update is a brand new starship, the sophisticated new sail-equipped Solar class. This highly-varied new ship comes with unique technology and is most commonly found in pirate-occupied systems.

What’s more, keen ship hunters will be able to find their perfect version without losing any of their existing vessels, as the maximum number of ships has been increased from six to nine. All ships now also come with a specialist high-capacity cargo inventory, perfect for holding smuggled goods…

All this and much, much more await in the Outlaws update. 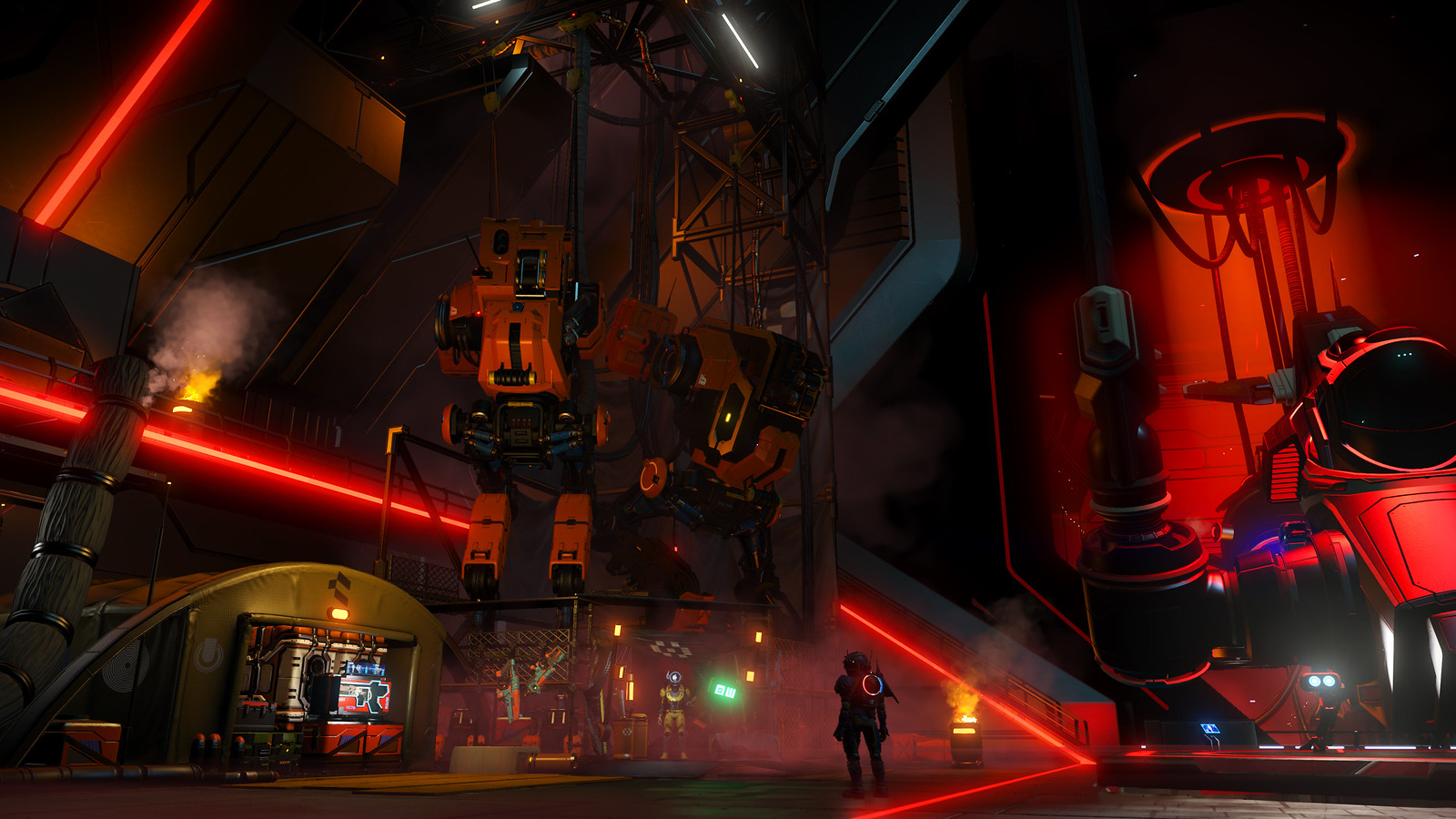 Outlaw systems are dangerous, lawless places, with frequent conflict. But this all represents an opportunity for players with an eye for raiding passing starships.

A new series of missions lead players towards these new pockets of rebellion, and once there they’ll find a specialist bounty master with brand new pirate missions; black-market technology merchants with a range of suspicious upgrades; and a chance to acquire valuable goods illegal elsewhere in the galaxy. Piracy-minded players can also acquire a forged passport that will allow them to reset any reputational damage caused by their activities.

No Man’s Sky’s first new starship since the start of 2020 is a high-tech, sophisticated flier. With unique solar-powered sail and engine technology, this is the vessel of choice for those looking to speed between the stars.

Though all the solar ships share the sail philosophy, there is considerable variety across the class. Ship hunters can look forward to scouring the galaxy for the perfect combination to match their existing fleet. 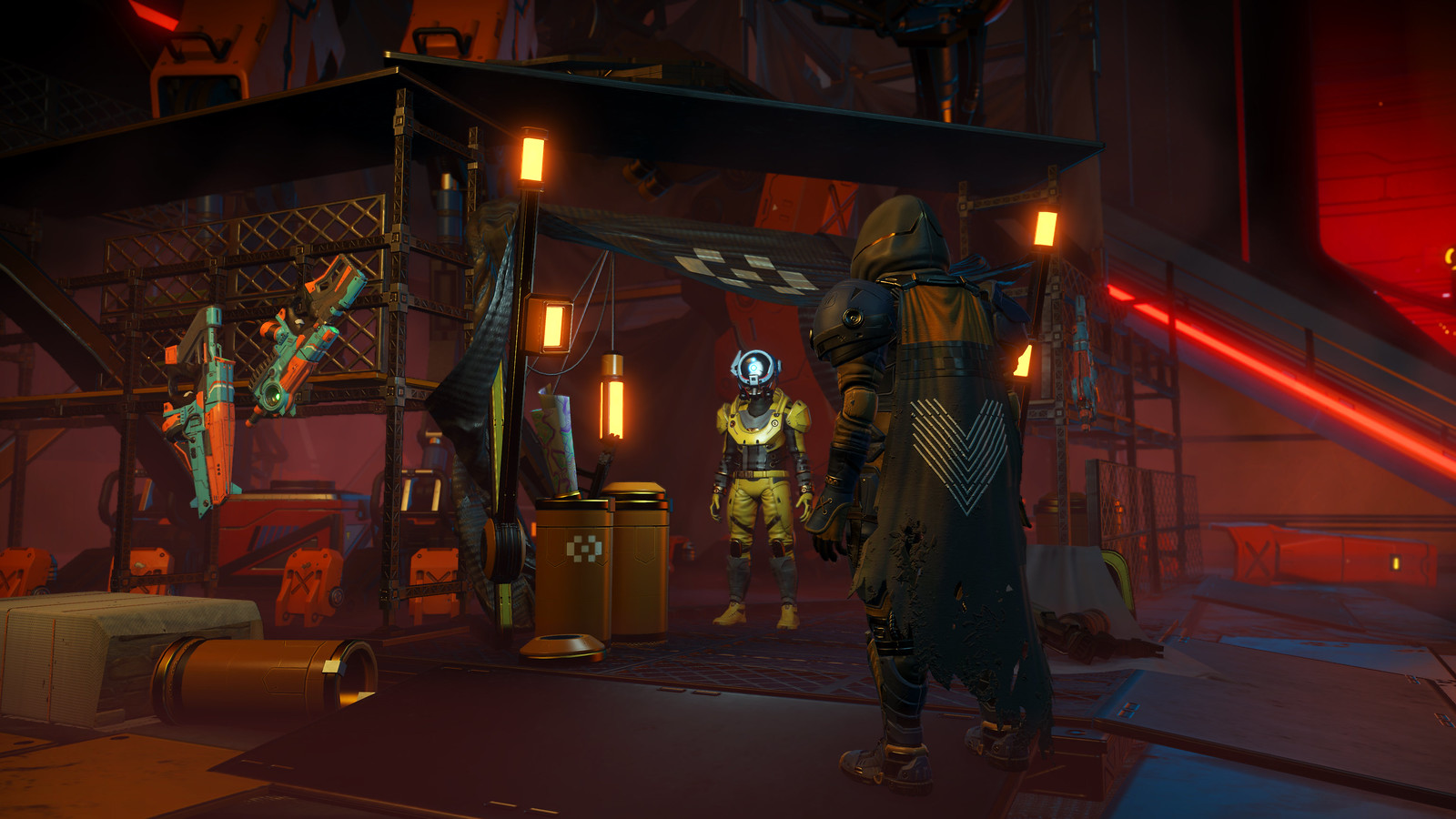 Illegal goods purchased in outlaw systems can be smuggled into regulated space, where they can be sold for a significant profit. But with the smuggler’s life comes danger – the Sentinels are now on the lookout for contraband, and discovery is only a cargo probe away.

All players – not just the smugglers – will benefit from the addition of specialist cargo inventories to all starships. These high-capacity slots can store large quantities of cargo, and storage-hungry players can unlock extra slots from the ship upgrade terminal found on all space stations.

Players can now recruit and upgrade their own personal squadron of wingmen to assist them in ship-to-ship combat! Once a squadron bay has been installed on your capital ship, NPC ships can be recruited by speaking to their pilots. Each pilot comes with their own abilities and can be upgraded over time to improve the combat ability. 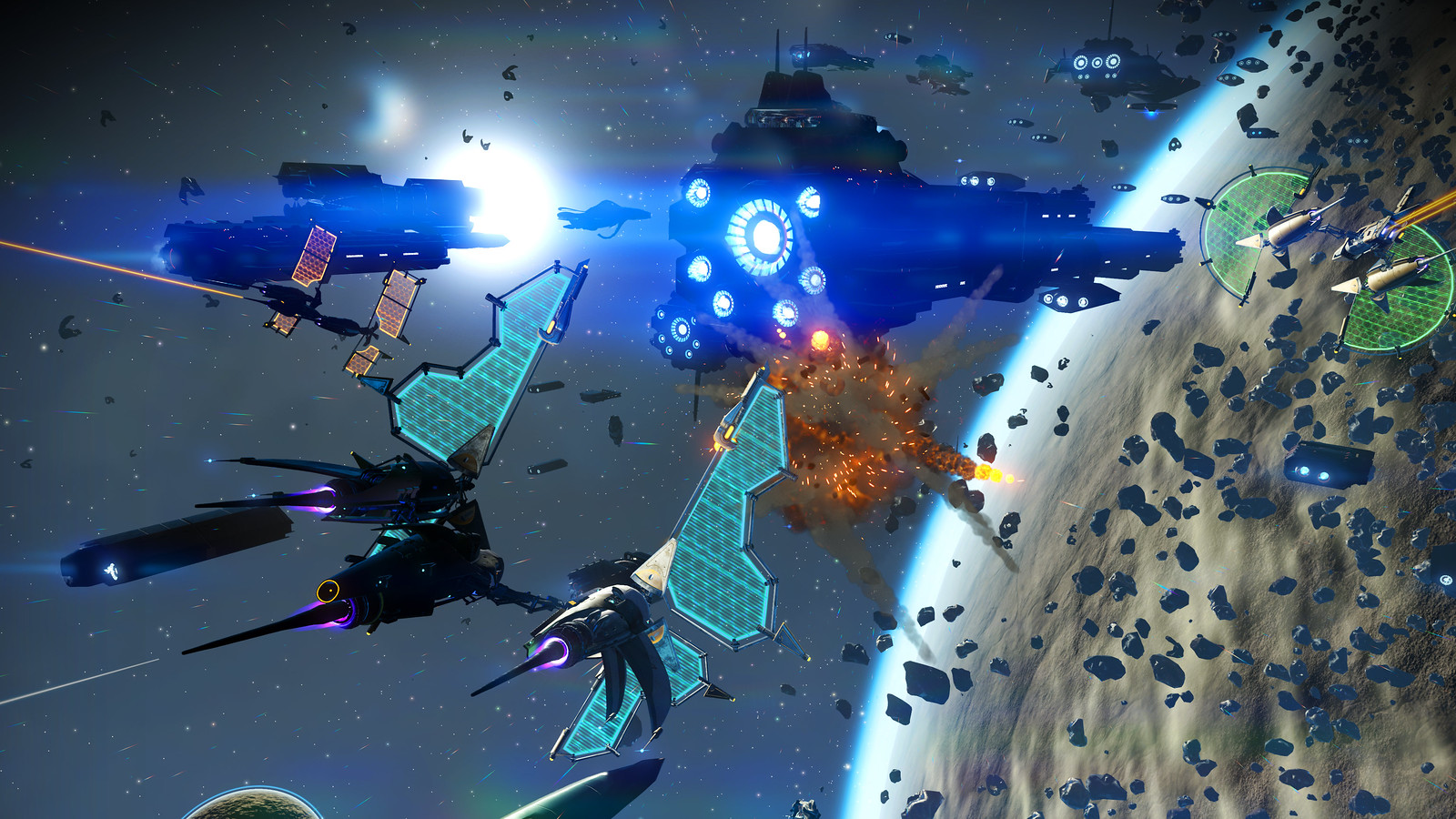 Space combat has been rebalanced for speed and excitement. Handling has been improved; weapons have new visual effects; enemy starships have shields; and depth has been added to weapon selection with a variety of specialist secondary effects, such as slowing enemy engines or disabling shield systems.

Ship-to-ship combat can now occur within a planet’s atmosphere – watch out for pirate raids upon planetary buildings, as successfully defending an outpost or settlement offers a health reward! 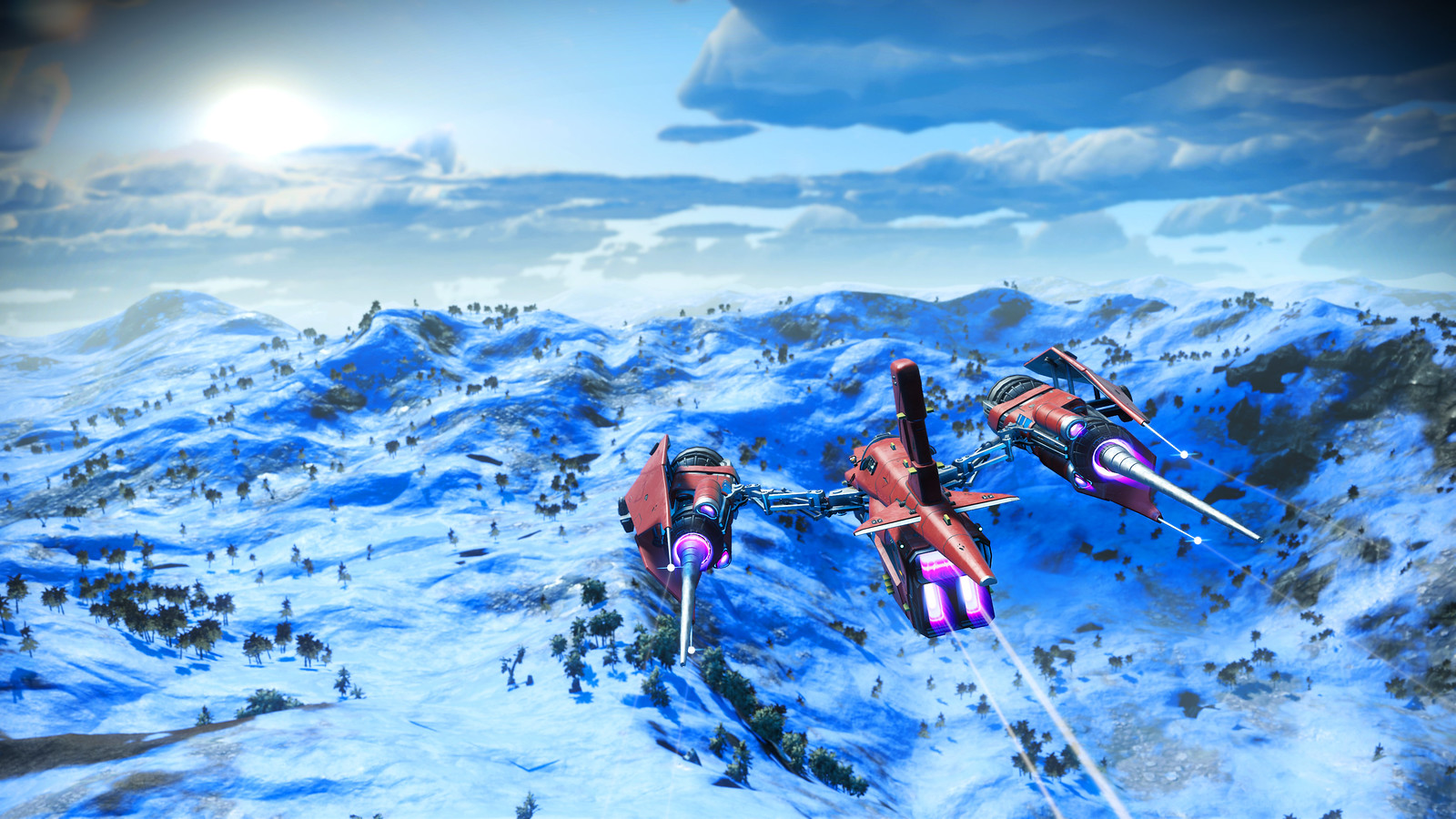 Flight accessibility has been significantly improved with a new Auto-Follow mode. This option, set within the main options page, allows players to auto-align their ship with their current target. This mode retains player input over the controls but avoids any frustration in locating and locking on to enemy ships.

Embark on your sci-fi quest at PS Store