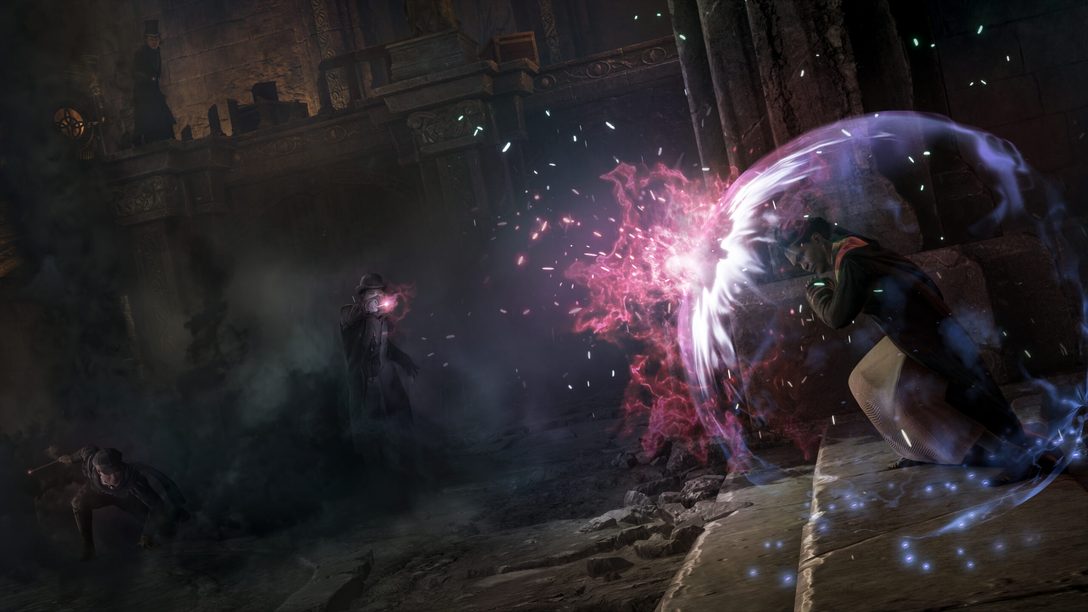 Wands at the ready for wizarding duels, magical beasts, character customization, and more.

Hi, I’m Chandler Wood. I’m a Slytherin and the Community Manager here at Avalanche Software. It’s been a while since we first revealed Hogwarts Legacy. Back then I still hadn’t even joined the studio. Now I’m part of this incredible team that has put a ton of effort into making sure our gameplay reveal would be worth the wait. We couldn’t be more excited that it’s finally here.

We’ve all dreamt of receiving our letters, attending Hogwarts, and forging a legacy of our own. As Wizarding World fans, we’ve wondered what it would be like for our stories to be found between the pages of a book, because that magic-filled world has always felt close to our own. Hogwarts Legacy is your story, rooted firmly in wizarding world lore, and it starts with creating the witch or wizard you want to be.

I joined Avalanche in late 2021, but the team had already been hard at work for many years. I’m still reeling that I get to work on a project that captures the magic, spells, beasts, people, stories, and wonder of the wizarding world. As Community Manager, it’s my pleasure to introduce you to a development team full of fans making an authentic wizarding world adventure.

One of the first things I did was ask Game Director Alan Tew what fans love and expect from the Wizarding World. Our resulting conversations could fill tomes, but when I asked him to settle it into two sentences, he told me, “The most ever-present part of the Wizarding World is its magic, and the playful nature and ‘realness’ of its distinct rules should fuel a surprising, dark mystery that tests the combined resources of those who discover it. But just as important are the opportunities to experience hundreds of memorable moments, small and large, that fans grew up with and know by heart: from being Sorted in the Great Hall, exploring a new secret chamber in Hogwarts, or impersonating others with Polyjuice Potion; to protecting innocents from a dangerous troll, dodging fireballs from a Hungarian Horntail, or soaring into the sky on the back of a friendly Hippogriff.”

All of these elements are imperative to the experience, but at the center of it all is a fully explorable Hogwarts replete with secrets to discover and mysteries to unravel. To learn more about our version of Hogwarts, I had to go to an expert.

Hogwarts Environmental Lead Boston Madsen has lived the life of a huge Harry Potter fan. She knows the books inside and out, a crucial resource when it comes to designing a Hogwarts that can embrace feelings of both familiarity and discovery. “We built the Hogwarts we as fans ourselves wanted to explore,” Boston said. “I think anyone who has read the books, whether they are an artist or not, has built a version of Hogwarts in their heads.”

Despite this being our version of Hogwarts, it’s a world you’ll instantly recognize. “There are familiar haunts like the Great Hall, clocktower and hospital wing, but also completely new places like the bustling kitchens,” Boston said. “Having felt like a student in these halls myself through the development of this game, I can honestly say there are still areas I come across that I didn’t know about before.”

Beyond just architecture and design, I’ve been consistently amazed at how much our Hogwarts feels like the magical school I’ve always wanted to attend, including extracurricular activities like avoiding Peeves while sneaking into the Restricted Section of the library. Life at Hogwarts is as much about finding secret chambers and sneaking into the prefects’ bathroom as it is learning to cast spells and brew potions.

Depending on which Hogwarts house you’re in, you’ll get to see each common room’s distinct architecture, décor, and entrances. My fellow Slytherins will be particularly fond of our common room entrance vanishing into a wall behind the slithering body of an enormous stone serpent. We’re also excited to show you our takes on the not often seen Ravenclaw and Hufflepuff common rooms, Ravenclaws rest high in a tower while Hufflepuffs reside in a cozy basement. Expect more in-depth looks at the common rooms later this year.

I can hardly tear myself away from exploring the castle, but this game goes well beyond the walls of Hogwarts to explore the village of Hogsmeade and the surrounding countryside. Hogsmeade is home to enchanting new characters with rich stories and personalities of their own, as well as vendors who will provide supplies you need for your schooling and other adventures.

Part of the magic of Hogwarts Legacy is exploring familiar locations in a new light, like just how close Hogsmeade is to Hogwarts or seeing the Forbidden Forest in the daylight. But to really offer a sense of freedom, we wanted to expand the scope of what you know about the land surrounding the castle. “We wanted you to have new locations to discover; to see what lies around and beyond the Black Lake, to meet new witches and wizards in the dwellings that dot the landscape beyond Hogsmeade and learn what other undiscovered chambers lie within Hogwarts or scattered across the Scottish Highlands,” Alan told me.

As game developers, we’ve labored over maintaining authenticity while making sure the game is still a fun experience. “There were hundreds of choices that had to be made between lore and gameplay and even some of the differences between each film and book,” Alan said. “Although we wanted to present a new interpretation of the wizarding world for gamers and prioritized a fun game before book or film authenticity, describing it this way can never capture how exhaustively we strived for authenticity and immediate recognition in everything we did.”

In many ways your legacy in the late 1800s wizarding world will be familiar to everything you loved about the Harry Potter series—discovering magic, making new friends, and being a hero. Narrative Lead Moira Squier offered me some insight into these parallels.

“Players will get to experience what it was like for Harry starting at a new wizarding school and knowing no one at all. And, like Harry, the player’s character is a bit of a celebrity from the outset due to the fact that they are starting as a fifth-year and because they survived a—” Sorry Moira, no spoilers! Let’s just say your arrival to Hogwarts is rather eventful.

Your ties to an ancient magic put you on a collision course with a goblin rebellion led by Ranrok, aided by his alliance with the Dark wizard Victor Rookwood, who both present formidable threats to the entire wizarding world.

“Ranrok has seen a glimmer of a magic that wizardkind tried to hide – even from themselves – and he wants that power in particular. His worldview is skewed by his hatred of wizards, which makes his alliance with Victor Rookwood particularly tenuous,” Moira said. “Once Ranrok gets what he wants, no one will be able to stop him and the wizarding world will be doomed.”

To unearth the mysteries behind ancient magic and stop Ranrok’s rebellion, you’ll need a friend and mentor to guide you along the way. Enter Professor Eleazar Fig, whose investigations into rumors of a goblin rebellion have earned him an uneasy skepticism from the Ministry of Magic.

Fig is just one of many characters who will play a part in your journey. Whether it’s fellow students becoming companions, professors teaching you new spells, or even some assistance from those who reside outside the Hogwarts walls, there’s no shortage of friendly faces to provide a helping hand or a welcome distraction. You may even come across some familiar names, like a Weasley or two.

Your studies at Hogwarts will help you overcome the mysteries and dangers that lurk beyond—and even within—the walls of the castle. As you learn from your professors and classmates, you’ll gain new spells and abilities to use in combat and puzzles throughout Hogwarts Legacy.

A variety of spells provides different ways to approach combat. Do you go in wands-blazing by using Accio to pull an enemy close before blasting them with Incendio? Or do you cast the Disillusionment Charm to take a stealthier approach, finishing off enemies with a silent Petrificus Totalus takedown? Different techniques will be required to counter enemy strengths and weaknesses that should make every encounter feel engaging.

As a gamer who likes a bit of a challenge myself, I’m happy to say that we’ve been working hard to make sure combat in Hogwarts Legacy has a depth and challenge for players who want it. Whether you just want to experience the story or make every swish and flick of your wand matter, a range of difficulty options will be available to meet various skill levels enabling players to experience the game in a way most enjoyable to them.

Anyone familiar with the wizarding world knows that magic goes beyond just wand work. Magical plants and potions bring even more tools to each fight. You’ll be able to brew Wiggenweld potions for healing and use a Mandrake seedling to incapacitate enemies with its cry. As you continue your studies at Hogwarts, you’ll learn more recipes for potions and how to handle an assortment of magical plants.

Our Hogwarts Legacy State of Play presentation showed quite a few other things: The Room of Requirement, taming magical beasts, customizable gear that you can loot and earn throughout the world, and a whole lot more. We’ll be diving into many of these topics in detail before we launch. However, there is one more thing I wanted to make sure we addressed plainly:

Hogwarts Legacy is a single-player open-world action RPG. While you can have NPC companions join you on your adventures, the story is about your own legacy.

These are only pieces of the immense experience we’re building in Hogwarts Legacy. Game Director Alan Tew best sums up how everything comes together:

With Hogwarts Legacy, we had the incredible opportunity to tell any story we wanted within the wizarding world. One fantasy stood out. Many fans of Harry Potter imagined what it would be like to receive their own Hogwarts letter, be sorted, and attend Hogwarts. More than anything else, we wanted to allow fans, after all these years, to finally tell their story, their way, at the most beloved school of witchcraft and wizardry. Only an open-world action RPG could capture the breadth of our fantasies.

Your story deserves to be as thrilling as other wizarding heroes. We start you as a late-fifth year so you needn’t hold back on the kinds of adventures (and themes) you might want to explore. We place you in the 1800s to ensure your legend is never overshadowed by any other hero. And we invent a new dark mystery so your conflict never feels like a retread of something you’ve seen before. With your continued support, we hope to explore even more in the future!

We are honored to have been entrusted with the freedom to create a brand-new wizarding world experience for fans around the world. As a fan and gamer myself, I can’t wait to talk more with you throughout the year about the incredible experience Hogwarts Legacy will bring to Wizarding World fans and gamers alike. From all of us here at Avalanche Software, we hope you enjoyed this look at the game and we can’t wait to show you more soon.