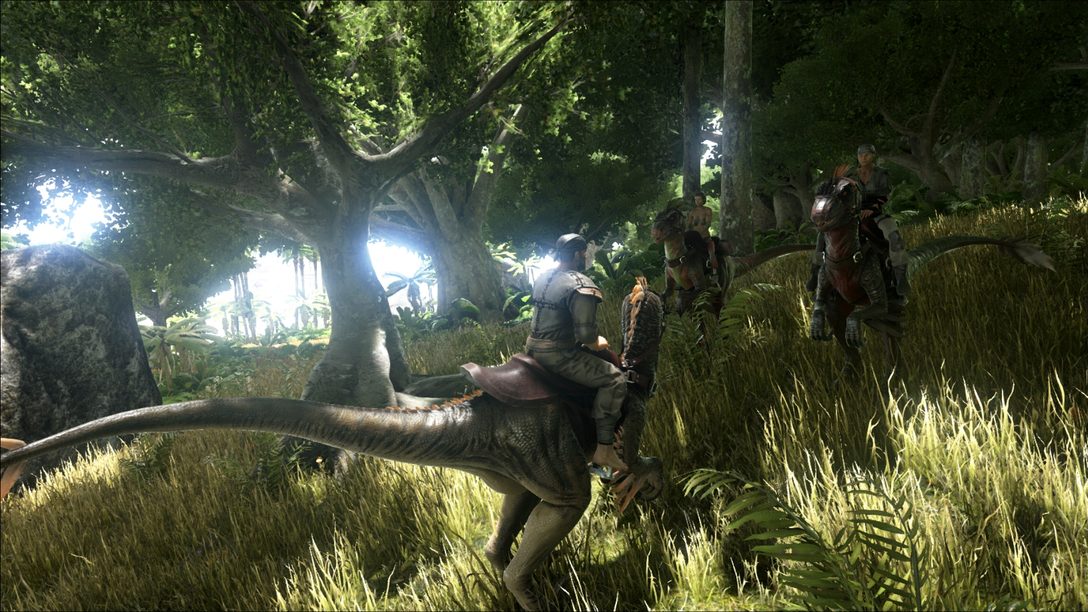 Hello New Survivors! Since Ark: Survival Evolved is included with March’s PlayStation Plus lineup, many new Survivors will be experiencing this vast adventure for the first time. There is an endless amount of information about Ark which can be overwhelming for first-time players, so we wanted to share some extra-helpful tips to give you a solid start on your upcoming adventure.

If you’re new to Ark: Survival Evolved, prepare to live off the land of a mysterious island. You’ll have to scavenge, craft, build, and contend with primeval creatures to survive and escape The Island.

New Survivors don’t have access to much armor so a few bites from a raptor, or getting overwhelmed by an angry pack of dodo birds, is likely to wear you down fast.  Building a bed quickly, even without a fully enclosed hut, is invaluable early on in your adventure, as it allows you to respawn at the same point every time.  Otherwise you’ll be randomly placed on The Island without access to stored gear, which is a very dangerous situation.

Whether by accident or by poor decision making (probably the latter), you may find yourself being attacked by a dinosaur far beyond your skill level. In those instances the best defense is to…..run!  When upgrading your character, the increased health and attack power sure look tempting, but applying your character upgrade points to speed gives you the ability to outrun many lower level dinos.  This will save your skin more times than increased health will in the early goings.  It’s also important to remember the golden rule – you don’t have to outrun a dino…you just need to outrun your friend.

After getting your bearings and leveling a bit, you’ll be ready to begin taming the creatures around you. It will be tempting to ride on the back of a Raptor or obtain a cute little Dodo as a pet. However, utility is key early on. The Triceratops (Trike) is a great option for a first “tame”.  It’s not aggressive so it doesn’t attack on sight.  It’s an herbivore so it can be fed easy-to-find berries during the taming process. It’s hearty with a large carrying capacity perfect for those extended resources harvesting treks. Get one early on and you won’t regret it.

You’ve gathered resources. You’ve crafted materials. You’ve worked hard to build a humble home.  The last thing you want is for a rogue dinosaur or other Survivors destroying all that you’ve built!  A tamed creature can help protect your base. Use the “anchor tame” positioned at the back of your house to secure your tame. Now your beastly ally will help fend off would-be attackers. Simply whistle after them when they’re done and they’ll return to their defensive position.

There are a lot of creatures in the world of Ark.  It’s vital to know which ones are docile most of the time, which ones attack if provoked and which ones attack on site. It’s safe to say that a Raptor is going to be aggressive most of the time, but what about the Parasaur?  Knowing the temperament of the creatures in each new area you explore will help you quickly traverse the Island safely.  If you’re unsure how aggressive a certain creature is you can also run up and punch it in the face.  Since you didn’t neglect speed (wink), just outrun it…or your friend.

Hopefully these tips will help new players with their early journeys.  There is so much more to learn and explore throughout the world of Ark. Good luck, Survivors!

Included with PlayStation Plus membership through March 2022