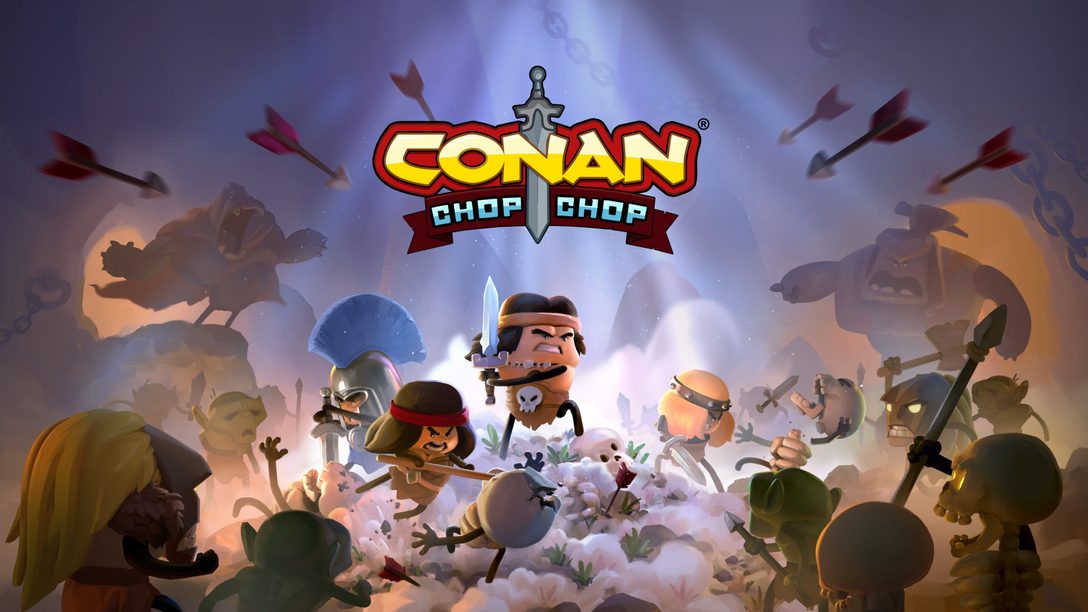 Putting the "party" in party roguelite.

It’s been an age since we last wrote an update on PS.Blog. Back then we talked about how the game we’d announced as a fake April fools’ joke in April 2019 was months from release. Well, the joke was actually on us and it’s been almost three years since. It started with an idea that would be a fun and ridiculous take on the Conan universe but then we couldn’t stop thinking of all the additions that could make the game even better. So the scope grew until we were happy enough but that time has now come and we are releasing Conan Chop Chop into the world on March 1. If you don’t believe us, I can’t blame you. But you can ask the journalists who received review copies for it!

We’ll take you through the new inclusions to wet your barbarian (or adventurer, or pirate) appetites in a moment. But first, a refresher for those new to our game:

Chop Chop isn’t just the title, it’s an instruction. Hack your way through the different areas in Hyboria along with friends. Every area is filled with tougher foes than the last so equip the best combination of weapons, armor, and charms to take down anything in your way. When you inevitably fall, re-arm yourself, level up your character and get back out there. What kills you in Chop Chop also makes you stronger.

As for what we’ve been working on:

Party up – Online multiplayer has been added

Slaying a ton of monsters is fun, but it’s always better when you’ve got your company. Play couch co-op or team up with friends across Hyboria to take on this mighty challenge. Plus, teaming up with friends greatly increases your survivability. They can be just the “pick-me-up” you need when you fall in the heat of battle. Just remember not to curse them too much when Bêlit takes your kill with a timely arrow.

Don’t worry if it all seems too daunting. Swinging a sword is dead easy in Conan Chop Chop. And even if you die, you’ll start right back at the beginning with more experience to show for it. So even if your friends suck at games, bring them along, I’m sure you can hard carry them through the game until, inevitably, you all die again. But that’s all part of the experience! We’ve added unique skill trees for all four characters including special abilities for you to explore. The different playstyles between the characters have also been balanced to give you different ways of approaching combat. From Bêlit’s ranged attacks to Pallantides’ improved blocking, you can pick the character that best suits you.

There are tons of charms and equipment to be found. From your standard fire arrows to some more advanced high-tech stuff like a pig who tanks for you. Want to poison your enemies while you get some life back from the damage? You can make that happen. Want to rain arrows down on your enemies while chickens get up close and personal? Chicken Champ and Twin Fangs are the charms for you. You might even find a completely broken build that we’ve forgotten to take out of the game.

The world of Hyboria changes each time you play. Don’t try to make a map, seriously, it’s not worth it. On one run you might find a boss guarding a great sword and on the next you’ll find nothing but undead throwing bombs at you. Grab the best gear and improvise. We’ll see you out there and find out if you can finally conquer Thoth-Amon.