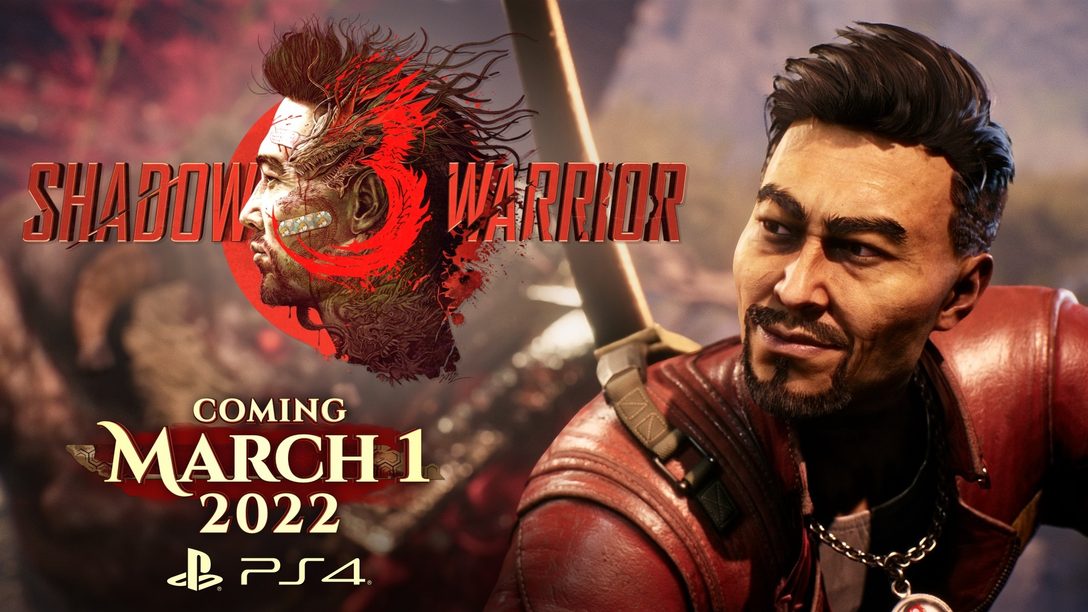 Pre-order now and receive the first two games for free!

Hello PlayStation fans! My name is Kuba, and I am the Game Director at Flying Wild Hog. Today, we wanted to tell you more about our upcoming game Shadow Warrior 3, including some huge news – we can finally reveal the Shadow Warrior 3 release date!

So let’s start with what we love seeing the most, which is a nice, chunky pre-rendered trailer, and then let me tell you more about what this game is all about!

Shadow Warrior 3 is a fast-paced first-person love letter to katanas, guns, and self-expression. High octane, adrenaline-fuelled action, crazy explosions, and spectacular free-running movement all served in a colourful, orient-inspired fantasy world. It’s all designed to let your action juices flow like water through a busted dam. And the flow is fast. Real fast. Shoot first, ask questions later, because most of the time, the answer is “Boom!”.

The premise of our game is simple. You are an ex-Yakuza mercenary, whose lightning combat skills are matched only by your sharp one-liners. The story begins following the apocalyptic climax of Shadow Warrior 2. By nearly bringing the world to its untimely end, you accidentally opened a multi-dimensional prison cell holding a huge, world-eating dragon. Now, finding yourself in the middle of an apocalyptic hellscape, and, more importantly, with your mojo lost, are forced to team up with your arch nemesis, the ex-billionaire Orochi Zilla, and newly recruited sorceress supreme Motoko, to right your wrongs. However, the road to redemption is spiked not only with ultra-malevolent Yokai demons but also with equally damning distrust between your team of discount heroes.

In order to defeat this badass dragon, you need to awaken a power trapped in an Ancient Artifact. Unfortunately, the Ancients were devoured by the dragon during the apocalyptic event, but there’s one last item that can still be used to pierce through the dragon’s impenetrable scales – Hoji’s mask, an heirloom of your late and only friend. To awaken that power, the duo must request help from Motoko, the last remaining sorceress of the Kumo Brotherhood, an organization so secret no one knows what they do, why they exist, or where they keep their clubhouse. And that racoon that you saw in the trailer? It’s a Tanuki – a representation of Motoko’s power, a guardian spirit. Cute as it is, it fights like a demon, smells like a trashcan, and will eat pretty much anything.

Oh and wait till you see the gameplay. It’s freedom galore; take whichever approach tickles your fancy the most. Want to go full-frontal with guns blazing? Sure. Find yourself in a brawling mood and wanting to reduce monsters to minced meat with a katana? Knock yourself out. No holding back, just go bonkers! Actually, why not combine them all and start off with your guns, then go for the chi-blast, grapple your way into safety, and spice it up with some awesome finishing moves? Once you master combining all these styles you’ll become a force to be reckoned with!

The upgrade system gives you even more opportunities to go nuts on the monsters when it comes to combat. The arenas in which you’ll be fighting were specifically designed to encourage you to use all the aforementioned combat styles, in any combination. The only thing that’s limiting you is your imagination and the classic levels allowed us to maintain consistency in the plot.

So thank you for checking out our trailer, and for joining me in this post. I hope that you like what you saw and that Shadow Warrior 3 tickled your fancy – even a little bit. Shadow Warrior 3 is coming to PlayStation on March 1st. For real! We can’t wait to see how you’ll take care of those pesky demons. And whatever you do, do not forget about that dragon!