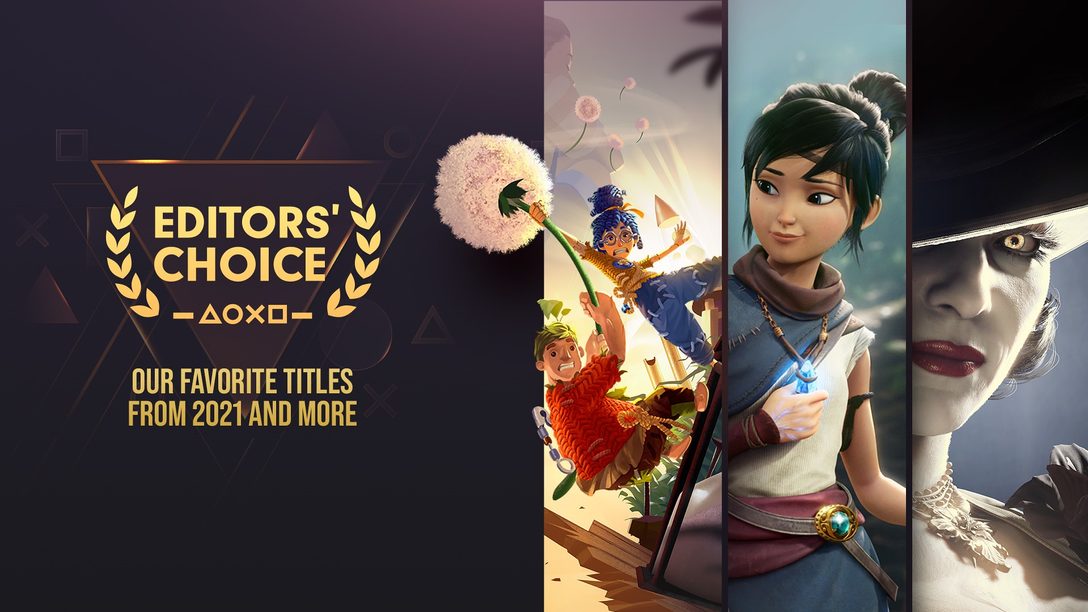 A look back at highlights from the year, picked by PlayStation teammates.

Just like that, 2021 came and went. A veritable smorgasbord of great games is left in its wake. We fought through vicious timeloops, battled werewolves, leapt across colorful platforming worlds, and so much more.

Throughout the year, PlayStation teammates selected their favorite titles to join the top-tier Editors’ Choice halls. To mark the end of a great year for game releases, we’re reflecting on several titles that were entered into the Editors’ Choice pantheon.

Agent 47 marks his return in IO Interactive’s excellent stealth assassination sequel. The adaptive operator lurks across a variety of colorful locales, from thrumming underground clubs to posh vineyards (complete with irresistibly lethal grape-pressing machinery). The Dartmoor stage is a standout – a murder mystery set within a sprawling mansion where Agent 47 can assume the role of detective. Whether your preference is free-style chaos or following subtle mission guidance, Hitman 3 keeps the sneaky experience fresh from start to finish.

This asymmetrical co-op platformer hits the genre’s high notes: variety, a swift pace, and critical collaboration. One moment players are fighting off enemy squirrels aboard a toy plane, and the next they’re tossing nails like javelins to create a path for their partner. You might not expect laughs and light-hearted fun from a tale about two parents and their little one processing an impending divorce, yet Developer Hazelight delivers. Notably, developer Hazelight’s impressive accomplishment has been recognized with The Game Awards 2021’s Game of the Year award.

Detective Harry Du Bois has hit rock bottom, and it’s up to players to guide his bumbling path through the tarnished sci-fi world of Revachol. Developer ZA/UM has crafted rich characters and immersive scenarios that are easy to get lost in. The story threads are diverse and rich, whether you’re helping Harry solve the central murder case, or pursing tangents with a passionate cryptozooligist. The PlayStation release of the game also features robust voice acting that further brings the unique world to life. If you love a memorable story, don’t pass up this gritty, introspective adventure.

Housemarque wowed PS5 owners with this highly polished, highly replayable sci-fi roguelike. Precision controls, moody atmosphere, and challenging combat makes starting each new cycle more irresistible than the last. Protagonist Selene’s arsenal, from the humble-yet-potent pistol to the auto-targeting Hollowseeker are top-class proof points of the DualSense wireless controller’s immersive haptics and triggers. Returnal is a defining PS5 experience that all bold adventurers should embark on.

Capcom’s next entry in the unstoppable survival horror series is an inspired evolution of RE7’s first-person gameplay and RE4’s iconic world design. Protagonist Ethan Winters risks life and limb to rescue his daughter, wielding and upgrading a range of powerful weapons, from shotguns that kick like mules to hand cannons that make short work of hulking wolf creatures. A rogue’s gallery of villains impede Ethan’s quest, from the intoxicatingly lethal Lady Dimitrescu to the gear-headed Heisenberg. Whether you’re a newcomer to the RE series or have been following it since the Spencer Mansion, this is one of the most exciting titles in the series yet.

Developer Greg Lobanov and his team combine the simple pleasures of coloring books with classic top-down action exploration. Wield a magical brush to splash life back into the world, solve environmental puzzles, and tackle some memorably challenging boss battles. Despite its cheery exterior, Chicory also tackles the deeper topic of imposter syndrome with a nuanced and heartfelt approach.

Insomniac delivers a tour de force showcase of the PS5’s robust power. The super-fast SSD transports a set of heroic Lombaxes and their robotic companions across dimensions in a snap. The DualSense controller makes Insomniac’s signature weapons sing – you’ll feel the difference in the triggers and haptics whether freezing enemies with the Cold Snap or blasting off Void Repulsor rounds. Combine all this with striking character animations, richly detailed worlds, and a touching story of companionship, and you’ve got one of 2021’s most memorable games.

From schoolhouse hall to end o’ day poem
In this Literature Club you will meet
Four girls who stir hearts not with a low hum
But with a terrible and creeping beat
A visual novel but with a twist
Building friendships and poetry writing
Try to choose one but you cannot resist
A subversive spin, so uninviting
Adorable girls with rhyme schemes to match
Gave way to darker narrative designs
You should play more than once to truly catch
Yourself in this indie’s digital vines
Doki Doki Literature Club Plus!
Is a psychological horror must

Greek myth collides with roguelike game design to astounding effect. Supergiant’s latest release features buttery smooth gameplay, whether you wield Zag’s trusty blade, powerful bow, or any of his other legendary weapons. Player choice permeates the experience, from choosing boons (Athena’s deflecting dash for life!) to purchasing permanent upgrades like damage output or the ability to defy death. A cast of memorable, multifaceted characters with dizzying amounts of dialogue add depth and charisma to each run. Want to shoot the breeze with first boss Megaera? Go for it. Make sure you’ve got plenty of time to spare when you pick up the controller to play, because this is an Editors’ Choice pick that’s difficult to put down.

The debut title from indie developer Ember Labs immediately impresses with strikingly designed characters boasting intricate animations. The expressive (and highly collectable) Rot immediately tug at the heartstrings. Charming looks can be deceiving, though, as enemy encounters and boss battles with corrupted creatures force players to parry, counter, and dodge with accuracy. The beautiful-yet-challenging game rewards players with heartfelt story beats and relaxing exploration and puzzles to even out the experience.

Double Fine’s cerebral sequel is one of the studio’s best titles yet. Raz dives into the colorful minds of his teammates and adversarie alike, from tooth-riddled dental nightmares to a bowling-inspired city lousy with germs. Acrobatically exploring these creative worlds is a platforming joy. Raz’s abilities, like floating or rolling on a bouncing ball, feel smooth and responsive. Double Fine also weaves an engaging tale, balancing trademark humor with touching moments. While fans of the original Psychonaus and PS VR Rhombus of Ruin game will get lots out of this sequel, it’s also accessible and worthwhile to series newcomers – so be sure to dive in.

The world of this side-scrolling horror title may be grimy and unnerving, but you’ll have trouble looking away until the credits roll. Tarsier Studios has crafted a variety of engaging environmental puzzles to keep the heart racing, from scaling book towers to escape a terrifying teacher to unlocking hidden doorways with the perfect chess move. The protagonist from the first title returns as an AI companion, who you can even hold hands with for a little extra comfort. You might need it, since this Editors’ Choice pick packs chills to spare.

Alex’s story in Life is Strange: True Colors is an emotional one. Not only is she trying to uncover the truth behind her brother’s death, but emotions also play a central role in the gameplay itself. Colorful auras offer information to players about whether a character is getting angry (red), feeling sad (blue), being joyful (gold), and so on. This vivid new mechanic and the story’s unexpected twists and turns blend into an unforgettable tale. Deck Nine’s narrative-driven adventure is a must-play for fans of nuanced characters and considered dialogue options.

The Tales series has long been known for its flashy battles and chatty ensemble casts. Tales of Arise doubles down on these traits with eye-popping effects that throw every color of the rainbow at the screen, then brilliantly contrasts those over-the-top confrontations with intimate interpersonal conversations between each party member. By the time you cross the 20, 30, even 40 hour mark, the entire crew feels fleshed out not only as individuals, but also as a unit. A moving story, solid battle system, and a cast you care about? Honestly, what more could you want from a JRPG?

Colt desperately wants to destroy the time loop he’s stuck in, but players might feel differently. Waking up for each new day on Blackreef is an exciting opportunity to gather new weapons, skills, and intel about the masterminds on Colt’s hitlist. Akrane Studios delivers a stylish, ‘60s-inspired world oozing with personality and opportunities to flex Colt’s tricks. Players can blink across gaps, go invisible, link enemies’ HP bars to deal group damage, and unleash all kinds of havoc upon unwitting foes. The sting of death is tempered by the promise of carrying over certain items and abilities, plus knowledge that might let you better get the drop on enemies next time. Just watch out for Julianna, who may invade your game as a player or AI-controlled hunter.

Marvel’s Guardians of the Galaxy

Star-Lord, Drax, Groot, Rocket, and Gamora unite in a fresh vision from Eidos-Montreal. Players control Star-Lord, leader of the Guardians, dishing out damage with his elemental blasters while issuing commands to his (sometimes) trusty comrades. Want Groot to create a root bridge across a chasm, or Gamora to sever the tentacles of a monstrous foe? Their satisfying powers are at your fingertips. In addition to the spectacular action, stunning vistas, and engaging story, Peter Quills’ mixtapes are packed with ‘80s hits to set the triumphant mood.

Who knew reaping souls could be such cozy business? Acid Nerve, the dev team behind Titan Souls, delivers an inviting adventure that expertly blends mellow exploration with demanding boss battles. If you’re struggling to take down an intimidating witch boss, scour the lands for hidden upgrades to health, projecticles, and abilities including a handy grappling hook. Combat in Death’s Door always feels fair, while remaining fast-paced and satisfying. Once the credits roll, you may find yourself looking for excuses to remain in the captivating world.

What were your favorite games of 2021? Sounds off in the comments below.

Explore a range of awesome picks