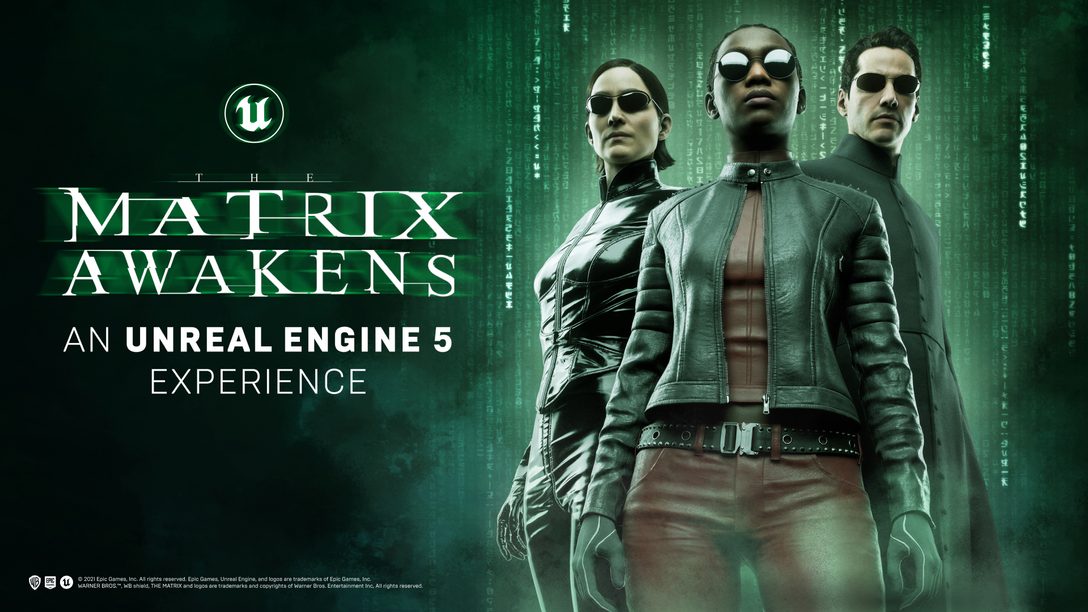 Want a glimpse at what interactive storytelling and entertainment created with Unreal Engine 5 could look like in the future? The Matrix Awakens: An Unreal Engine 5 Experience is a new tech demo that showcases what’s now possible when you combine UE5 with PlayStation 5.

Part cinematic, part playable experience, the demo was created by members of the original The Matrix movie team including Lana Wachowski, James McTeigue, and John Gaeta in collaboration with teams across both Epic Games and partners. 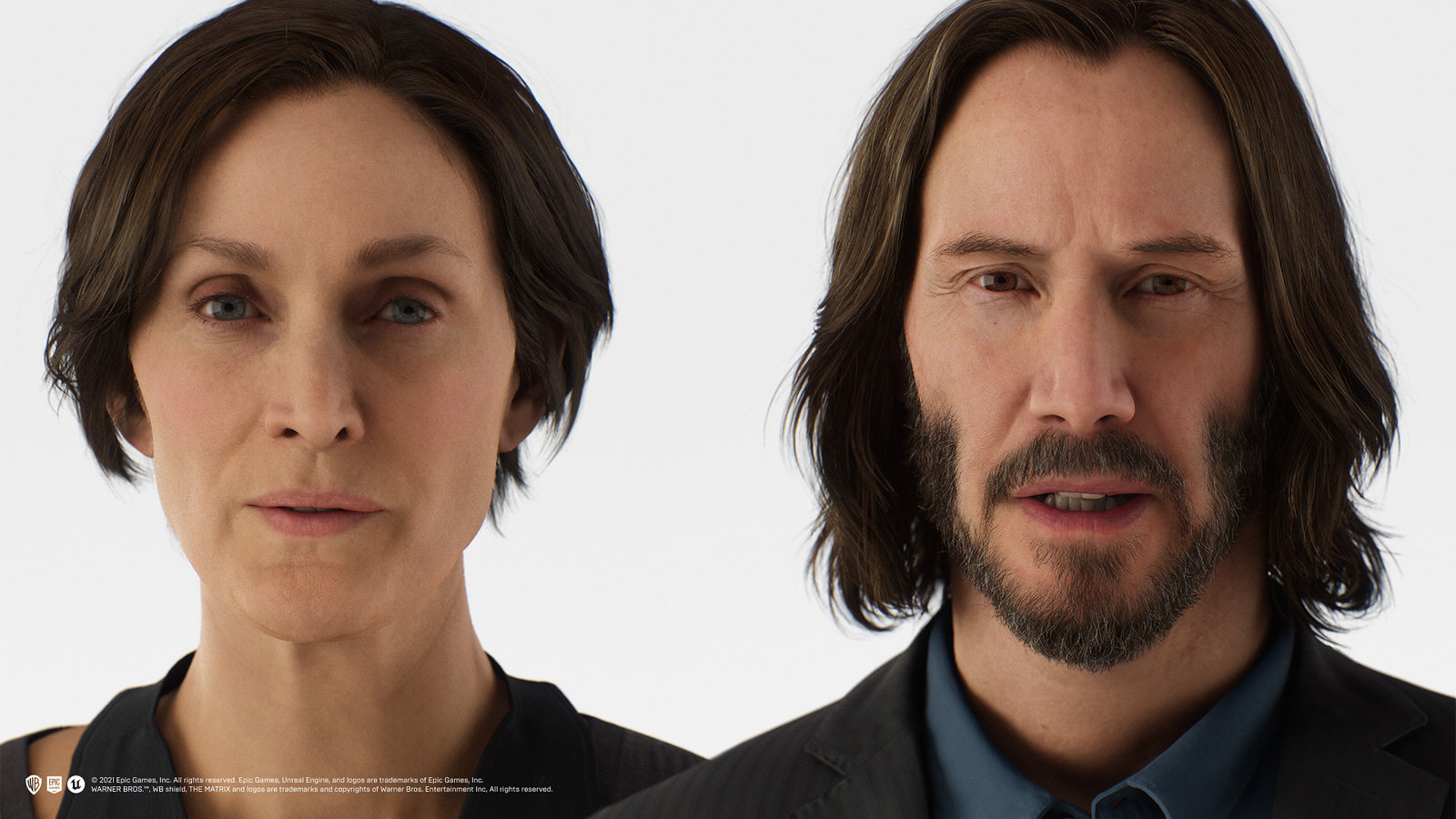 The cinematic element features digital replicas of Keanu Reeves and Carrie Anne-Moss as incredibly realistic digital humans. Then, the demo morphs into an interactive experience of car chases and fast-paced third-person shooter action.

These sequences are completely dynamic—the world responds to you in a fully unscripted way. That’s down to Chaos, Unreal Engine’s high-performance physics system that can deliver cinematic-quality levels of destruction in real time and simulate the movement of cloth, hair, vehicles, and more.

The team used Sequencer to script the car chase in the demo. They were able to use the simulated universe to explore different creative options for the cinematic content, with crew members driving cars around the virtual city to capture exciting shots. This process mirrored the way live-action movie makers will scout a city to find the best streets to tell their story—but without the physical constraints of the real world.

To do that, we’ve built a vast, 16 kilometres square open world city, comprised of seven thousand buildings made of thousands of modular pieces, each of those constructed of millions of triangles and enhanced with props, signage, debris, and more. There are 1,248 simulated intersections, 45,073 parked cars (of which 38,146 are drivable), over 260 km of roads, and 512 km of sidewalk. 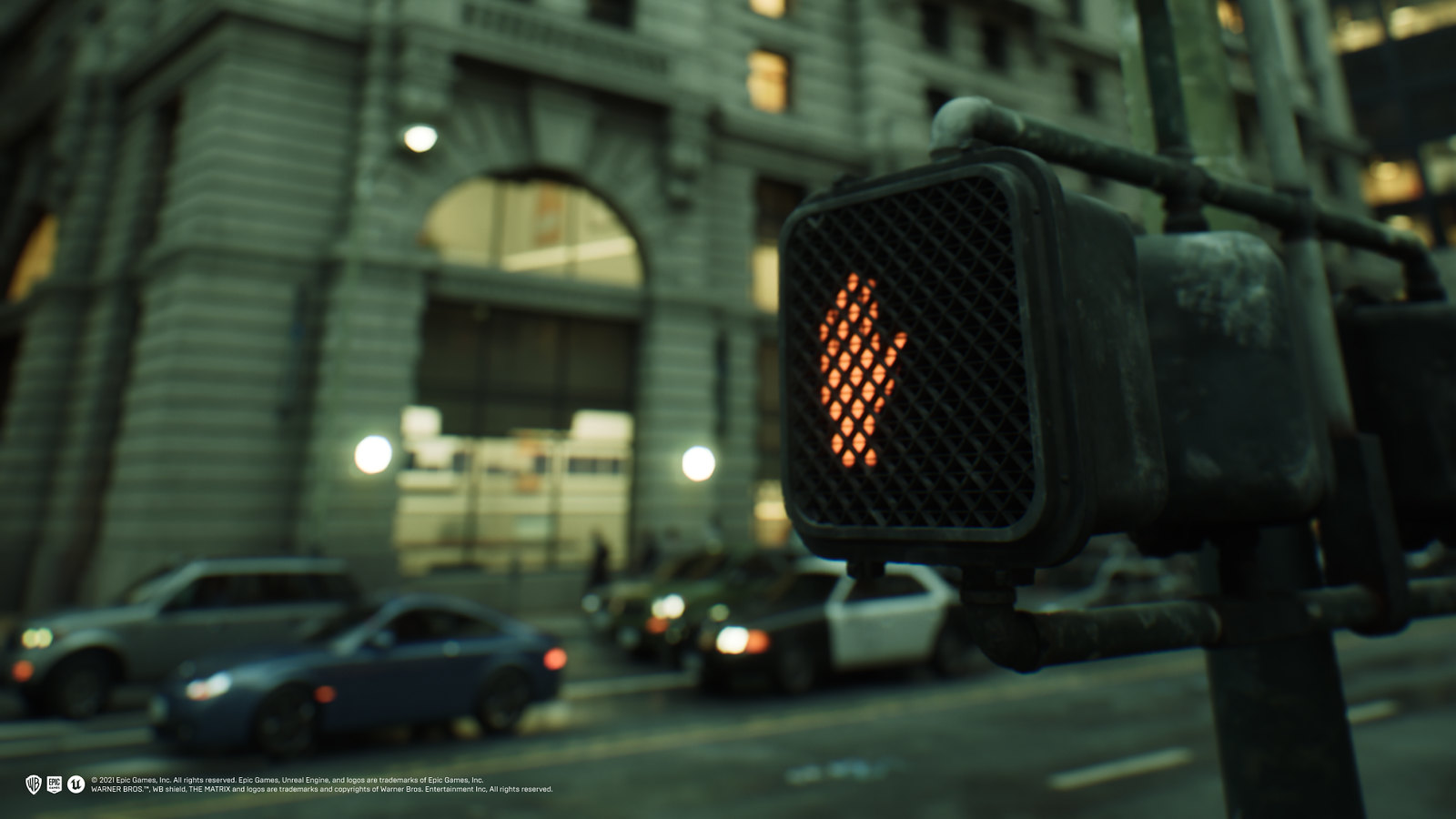 This huge, dynamic environment is incredibly rich, complex, and photoreal. It’s made up of billions of polygons that are streamed by Nanite, UE5’s virtualized micropolygon geometry system, and processed by PS5’s powerful CPU and GPU to deliver an incredibly high level of detail and visual fidelity. A powerful procedural audio generation system simulates the noise of being in a busy city, heightening the sense of presence in the environment.

The result is an interactive experience that is immensely powerful, immersive, and photorealistic. Packed with believable characters and driveable vehicles, you can explore the city on foot, hop in a vehicle, or fly around with a drone’s-eye view. 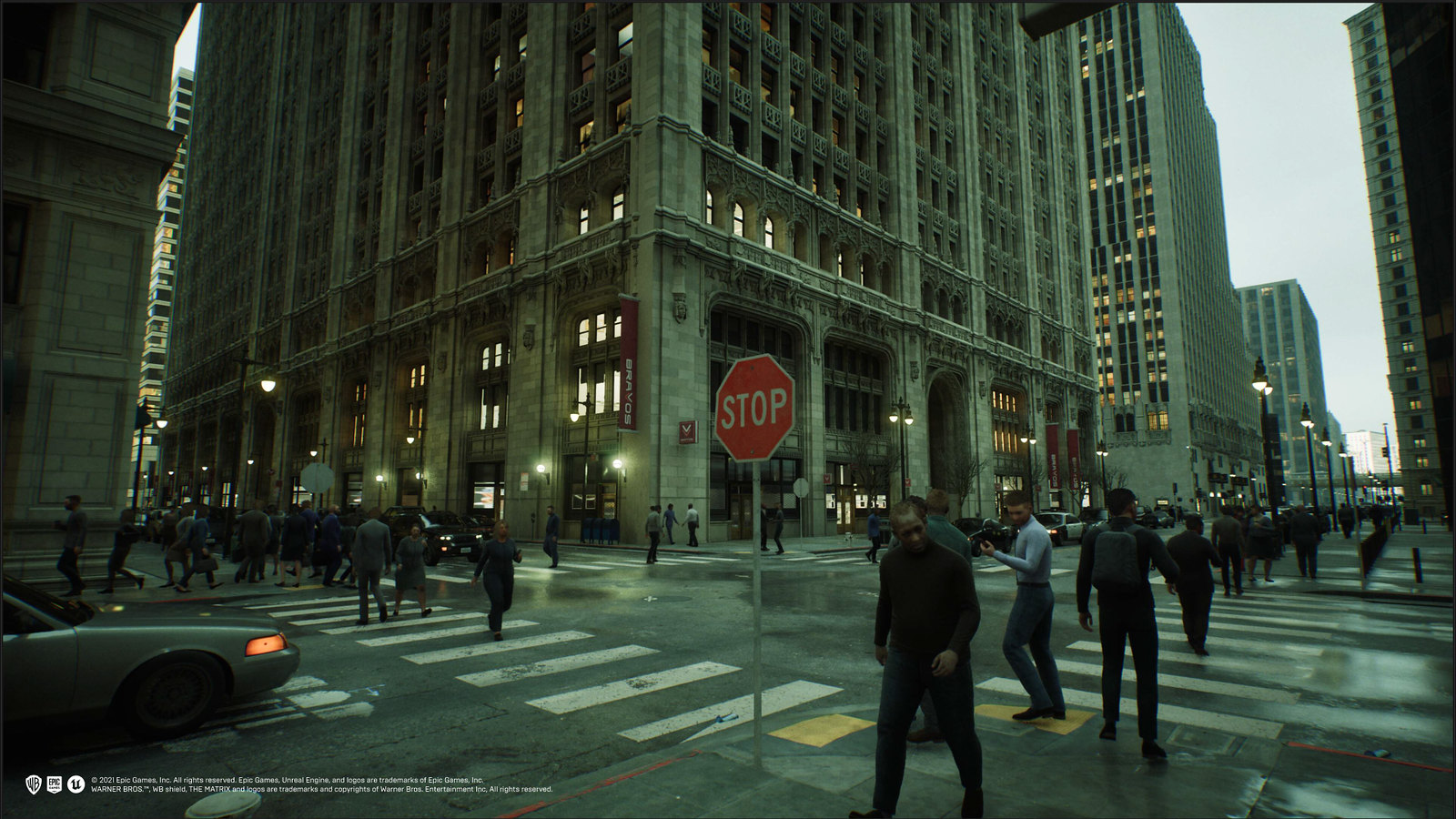 The demo represents a new bar in quality for interactive content—both richer and more engaging. That’s because the open world environment in The Matrix Awakens: An Unreal Engine 5 Experience is a living, breathing city.

It’s characters and traffic are not just generated spontaneously depending on where the player is looking—they are actors in a global simulation that is constantly evaluated. In short, they exist whether you are looking at them or not. This means the people and vehicles in the experience act in a much more believable way.

The environment also feels ‘real’ in a way that interactive experiences up to this point have not, thanks to new UE5 technologies that dynamically process everything in real time rather than serving up visuals that have been precomputed offline, as has typically been the case up until now.

Lumen is a case in point—this powerful global illumination lighting system brings the fidelity of indirect lighting such as reflections from mirrored or wet surfaces closer to the physical world than ever before. Because Lumen renders in real time, you can adjust the lighting in the experience by moving the sun to any angle and seeing the effect instantly. There’s even an experimental night mode hidden in the experience for you to discover.

To give the sense of a living, breathing metropolis, tens of thousands of ultra-realistic digital characters populate the city, driven by a sophisticated AI system. 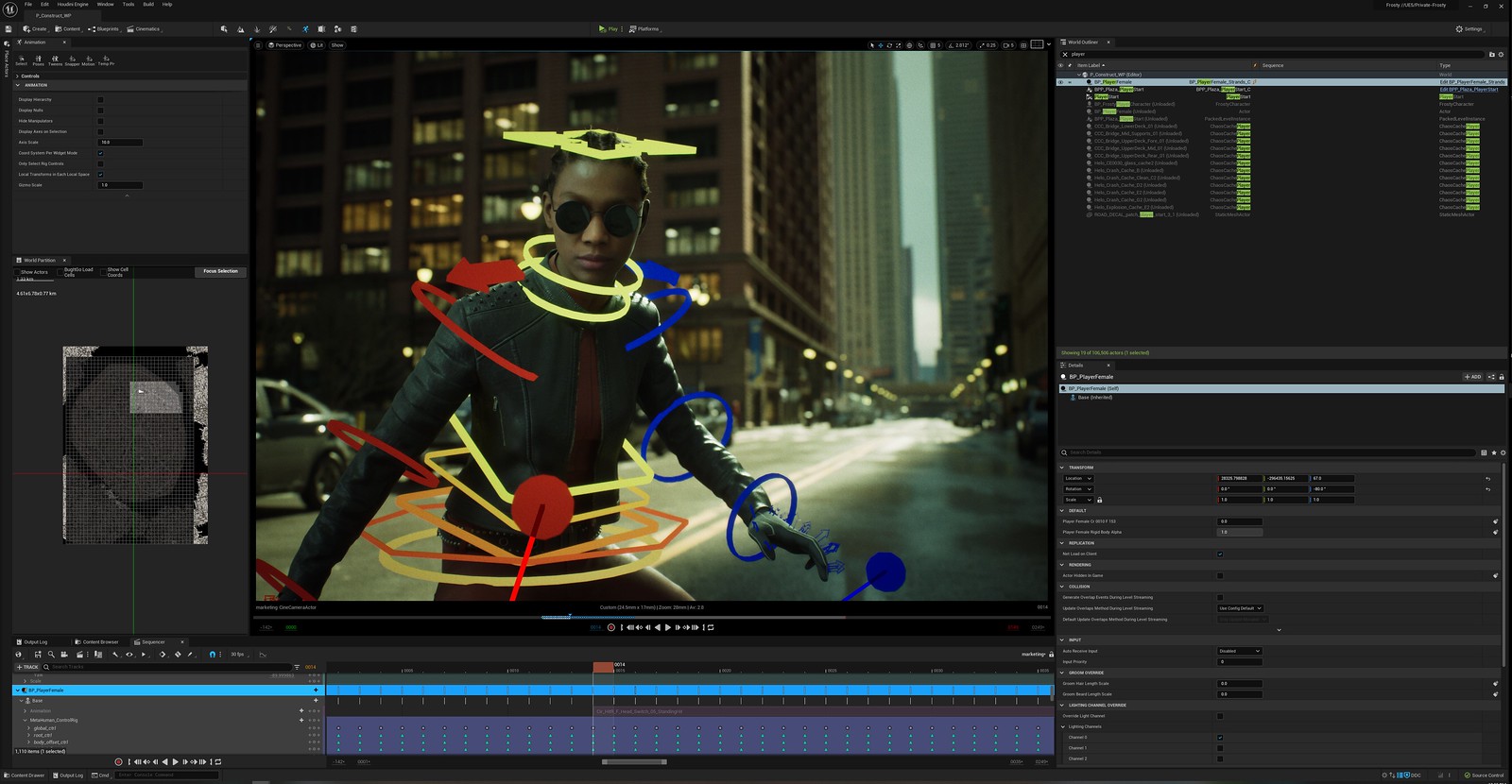 In the image above taken from Unreal Engine 5, you can see the hero character IO with the Control Rig being used to adjust the character animation. What’s exciting for game developers about this image is that it shows the asset under manipulation in the context of the live environment. It illustrates that you can create interactive experiences in a much more natural, fluid way—adjusting things like character animation in the city while it’s running in real time and at final quality.

The Matrix Awakens: An Unreal Engine 5 Experience showcases what the next generation of interactive experiences will offer: vast open worlds, ever more engaging action, and levels of graphical realism that can match that of cinematic content.

Download the experience and explore the future of interactive storytelling and entertainment.