How Soul Jumping in Tchia lets you play as anything 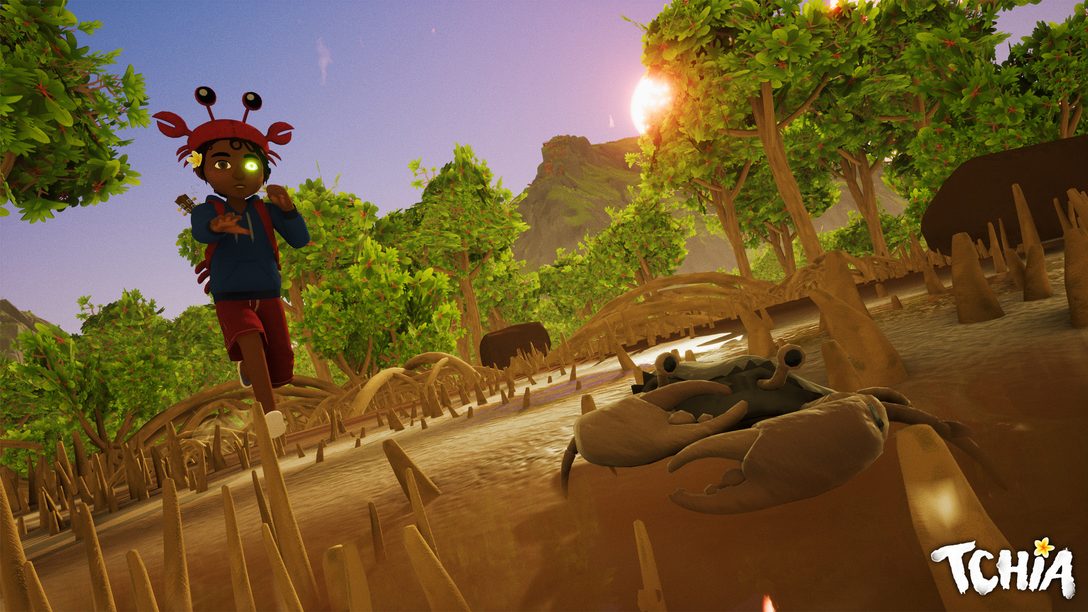 The core mechanic lets you take control of animals and objects around this tropical world.

Hey everyone! I’m Phil Crifo, game director on Tchia. We just released a really cool gameplay trailer during The Game Awards and we’re excited to dive deeper into our Soul Jumping mechanic.

Soul Jumping allows Tchia to take control of animals and objects around the world, opening fun and emergent exploration and combat gameplay opportunities. In this blog I’ll elaborate a bit on how this mechanic evolved over the course of development and how it works in the final game.

The Basics of Soul Jumping

Soul Jumping in Tchia is straightforward, you press a button and Tchia enters a sort of trance — in this mode, time is slowed down considerably, allowing you to aim precisely. Objects and animals you can Soul Jump to are highlighted in green. Aim, press the Soul Jump button, Tchia is warped to the target… You’re in!

Notice how Tchia’s tiaré flower transfers onto animals’ ears while you’re controlling them.

Tchia discovers her Soul Jumping abilities early on in the game, but that doesn’t mean she has full control over her powers from the start. At first, you’ll be able to take control of things for a short amount of time only, but as you progress through the game, you will discover special challenges that, once completed, will grant you an additional slot on your Soul Meter, allowing you to use your abilities more extensively and start experimenting with complex combos.

Once you’re controlling an animal or an object, you’ll notice Tchia’s Soul Meter slowly draining depending on what you do. This allows us to balance locomotion and abilities. For example, simply rolling around as a coconut will drain your meter very slowly, while covering long distances with a bird will be a bit more taxing.

Animals have very diverse abilities. Some are unique actions, for example dogs are able to dig up buried treasures and crabs can destroy locks and chains with their crazy pinchers. Other animals offer locomotion advantages such as flying or being able to swim super fast and deep, very useful for exploration.

Animals are fun to control, but objects can be very useful, too. When Soul Jumping to any object, you are able to control it and roll around using a fun physics-based movement system. From there, you can perform a Soul Throw; this technique allows Tchia to aim and shoot the object at a target while warping out of it at the same time. This is very powerful when used with explosive or flammable objects for example.

Soul Jumping is a core mechanic of Tchia, and we’ve been refining it since the early concept days of the project, here is a glimpse at its evolution throughout development.

At first, Tchia had a simple telekinesis ability. It was fun to move objects around but wasn’t very dynamic and didn’t feel super fresh.

Later on, we refined the mechanic to actually give direct control to the player while Tchia was stuck in place in a trance state. This was instantly more fun, but we realized it didn’t allow for dynamic combos or locomotion perks, as you would always go back to Tchia’s initial location when unpossessing. It also left Tchia’s body vulnerable and that didn’t allow for on the fly, quick evasive uses of the ability.

From there, the natural next step was having Tchia warp into her target in a quick and snappy motion, and jump out of it in location when unpossessing. This allows for very cool and dynamic combos, incentivizes the use of the ability in evasive and offensive maneuvers, and is just overall super fun!

Soul Jump onto our Social Feeds

Please let us know what you think of our new gameplay trailer, and shoot us a message if you’re excited about the game (We need the encouragement as we reach the late stages of production). Stay tuned for more deep dives into our sandbox mechanics in the near future, and give us a follow on Twitter for regular updates.

I hope this overview of our Soul Jumping mechanic sparked some interest and made you wanna explore the world of Tchia as a crab, a bird, a shark or any of the 30+ playable animals and tons of objects present in the game.
Tchia is coming Spring 2022 on Playstation 4 and Playstation 5. Cheers! 🦜🦀❤️