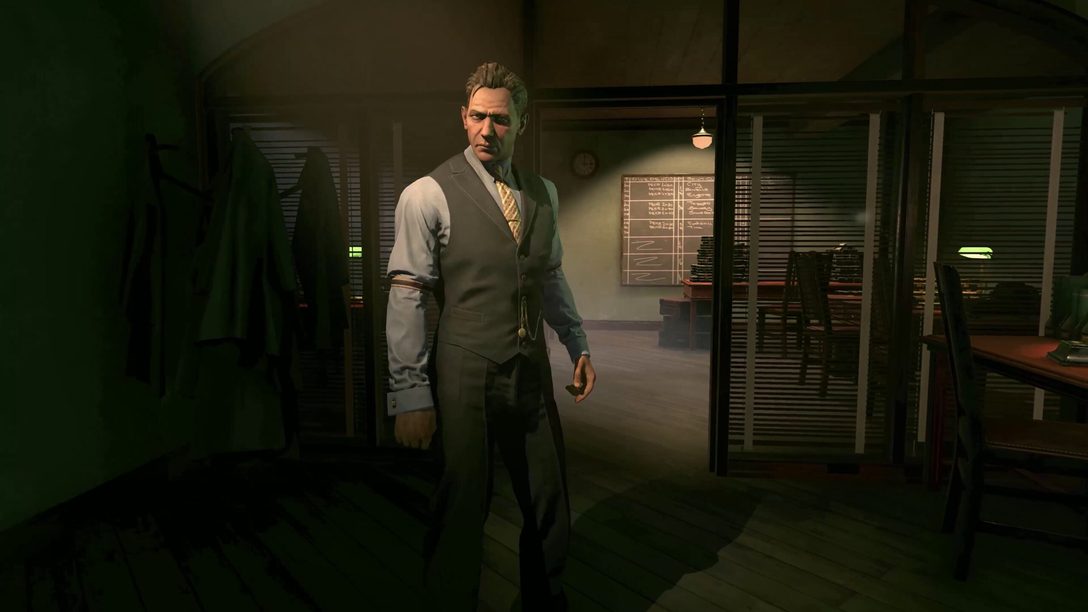 Take deeper control of your turf, meet a new mob boss, and more on November 18.

After months of hard work, we are almost ready to unleash our brand new Precinct update and Make it Count DLC, and shake up prohibition Chicago. All of us are extremely excited for you to play it, so while we’re working toward release day, why not share our excitement and showcase some new design and gameplay features?

Precincts are definitely our most ambitious change to the game, so let’s start there. Precincts are subdivisions of neighborhoods which provide a new level of control. Right now, you can build or burn a racket anywhere from Municipal Pier to Chinatown, and stake your claim. It’s a lot of fun at the start of the game, but as the game progresses, we feel it becomes too predictable. As upgrades are done on an individual basis, managing rackets dotted around the city results in considerable amounts of administration for any budding Mob Boss. Besides, once you own enough rackets, losing an odd one to the enemy doesn’t affect your game much. 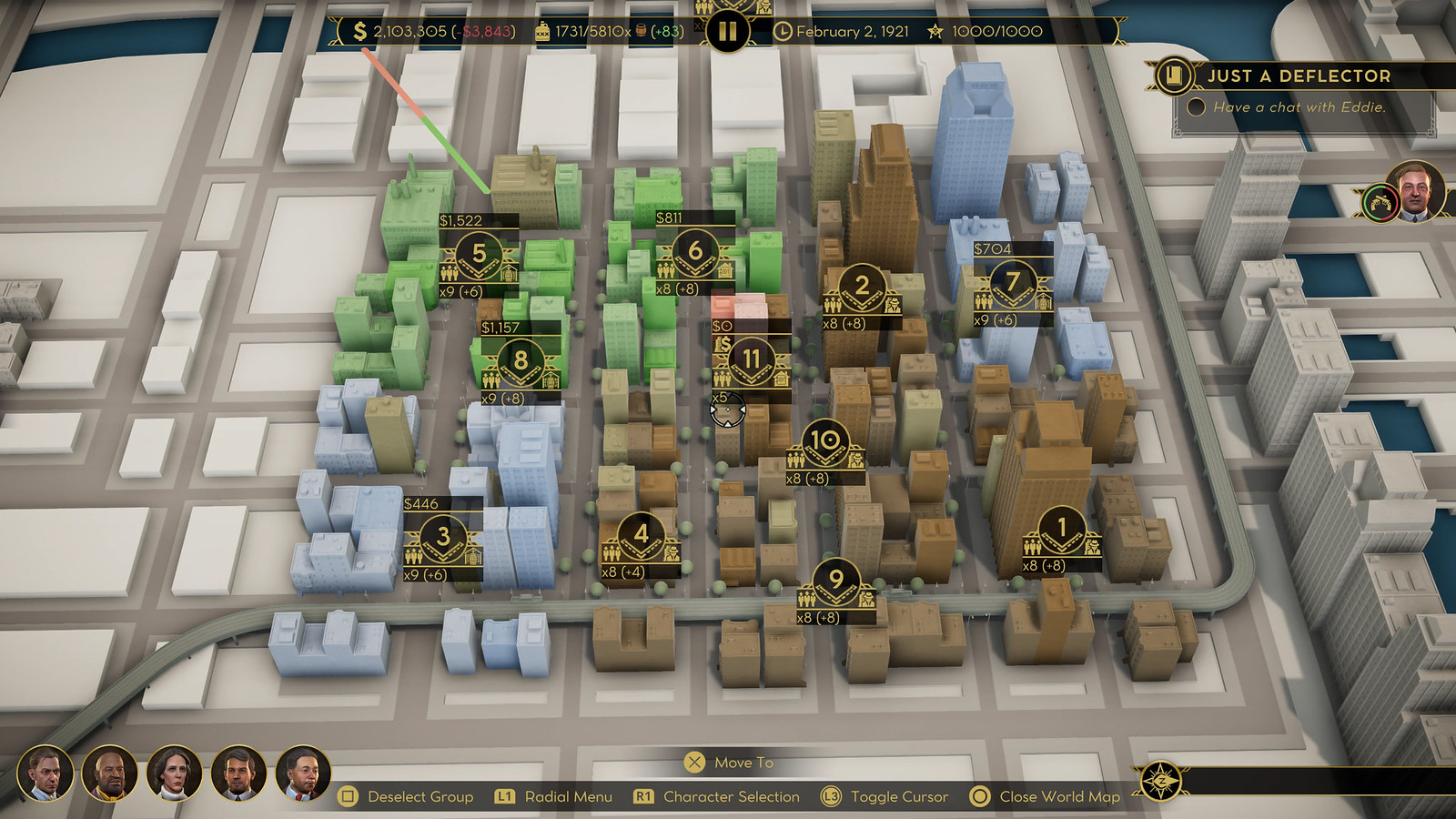 First off, economic controls have been streamlined with the Precinct update. You can keep track of your rackets, precinct by precinct, from one easy-to-use screen.

This is a more efficient way to manage your empire and keep an eye on the parts that need attention while leaving you time to get on with the other demands of being a Mob Boss.

In terms of expansion, precincts stack incrementally outward, painting your faction’s colors across the map, while also setting up a Supply Line. Another crucial element of your empire, Supply Lines form a pathway to get supplies out to your precincts and ensure your money has a safe route back to you. That means it’s bad news if your Supply Line is broken by the enemy and your precincts are cut off, stopping money from coming in until the Supply Line is restored. This also gives you new offensive strategy options, however: the only way past the enemy is through them, and if planned well, you can surround their precincts, giving them no way out.

So, how do you own a precinct? Simply take out the Depot. This is the precinct’s control building, and control won’t fall to you until you have claimed it. Depots are not to be underestimated. Security is heavy and they can draw reinforcement guards from surrounding rackets to help in the defense. This gives you options when it comes to taking over a precinct.

Attacking surrounding rackets first eliminates the reinforcements, removing them from the Depot fight. Of course, you can go for the quick kill and attack the depot directly. You will face more opponents, but bring enough firepower and they won’t be able to stop you. 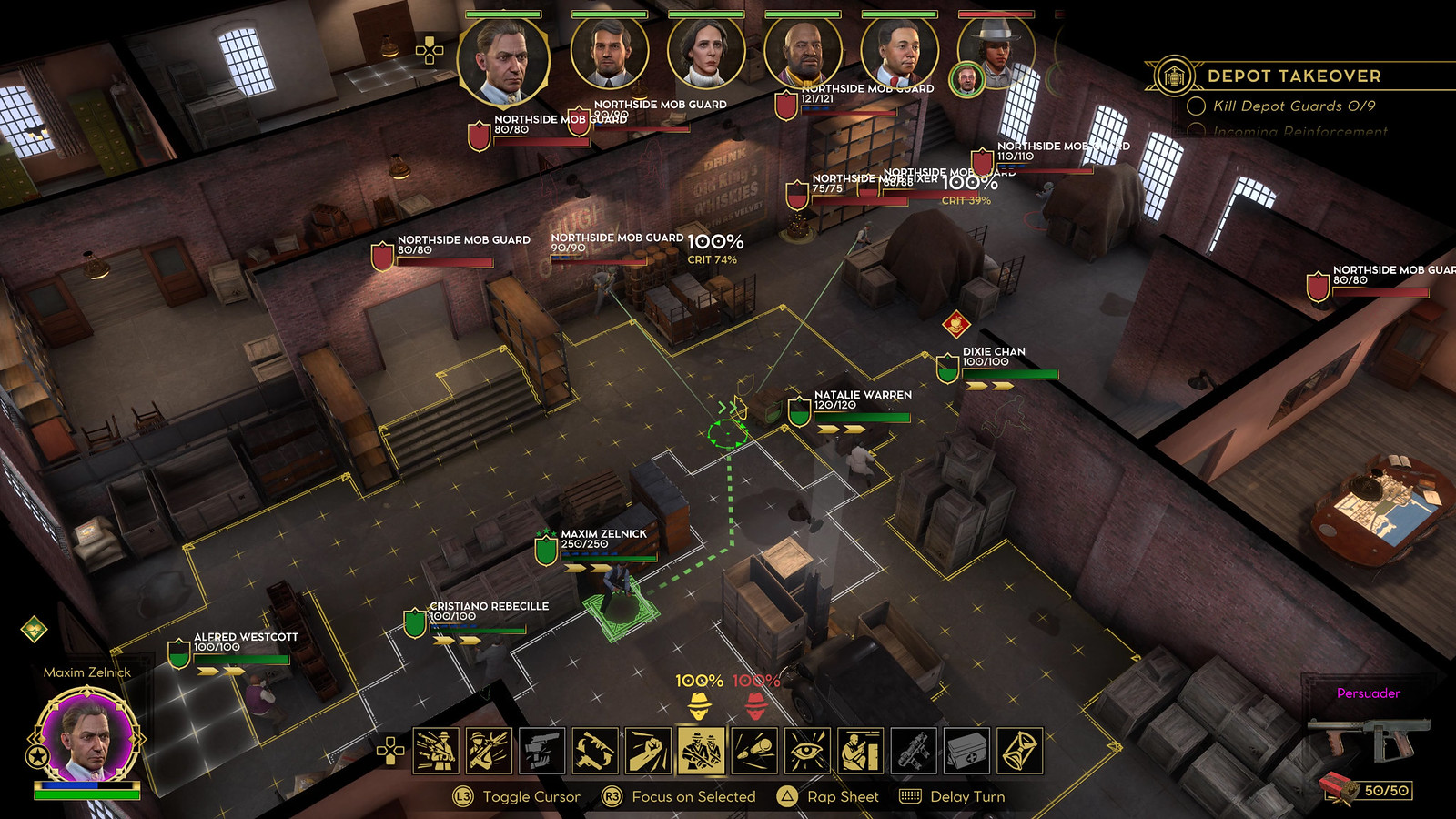 Interestingly, we found that the addition of precincts acted as a great motivator for the AI. As it stands, AI attacks on your rackets occur anywhere in the city. Thanks to precincts, the areas of attack have been greatly reduced. With less choice available, the AI has become more focused on areas of attack, with a special emphasis on breaking Supply Lines specifically. This adds another layer to your strategic game: precincts that border with the AI can focus mostly on security upgrades to prepare for these attacks, leaving the inner precincts – the heart of your empire – to focus on money-making upgrades.

Precincts provide deeper strategy options while avoiding current pitfalls. By splitting neighborhoods into precincts, there is more to gain, (and just as much to lose) by contending for control. Every decision you make holds more weight, and a good strategy in how you build your empire is critical. Empire of Sin’s take on turf wars gives you a sense of realism, a feeling of what it’s like to carve out your own ground, and more importantly, what it takes to keep it and improve on it. It matters where you pick your battles and how you plan your next move, allowing for more meaningful gameplay.

As a way to track your trajectory throughout the game, your campaign is divided into four Acts. Starting from your humble beginnings in Chicago, these Acts chart your progression and provide different rewards for reaching each one. Act I, The Roaring Twenties, starts with every new game session and reduces Police Activity generated from rackets by half. You reach Act II, Paint the Town Red, when a third of the precincts are owned by you and the AI, reducing Buy Out costs by 25%. Once a third of all major factions are eliminated, you enter Act III, Under The Gun, and reduce the cost of Racket buildings by 25%. The final Act, The View From The Top, triggers once half of all major factions are eliminated, and rewards you with reduced hiring costs for gangsters.

Something players have offered us lots of feedback on is the police. Well, we heard you! As you manage your precincts, we’ve made Police presence, and how they interact with you, more apparent. The suspicion value in the current game can be a little hard to decipher at times. It affects each racket differently and so relies on your own judgment. With the introduction of precincts, we added a precinct-wide Police Activity number that is much easier to keep track of. This value is affected, positively or negatively, by your actions and decisions. Keep your number low and it’s easier for police to turn a blind eye to your actions. However, even the dirtiest cops can’t ignore the most brazen criminal enterprises. As Police Activity rises, customers spend less, becoming less keen to drink in precincts with high police presence, and the police may even raid some of your rackets in order to look busy.

That covers the big stuff for the free update (yes, you read that right, everything mentioned so far comes with the free Precinct update). Let’s take a look at some of the new features coming with the premium Make It Count DLC.

First, we’ll address the new Mob Boss in the room. Maxim Zelnick is a Brooklyn-born butcher’s son, who cooks both the books and the bodies. Along with a sharp mind, Zelnick is bringing a different nuance to the Boss role. As a mediator for hot-headed mobsters, Zelnick has tailored his Boss Ability to this particular skill. 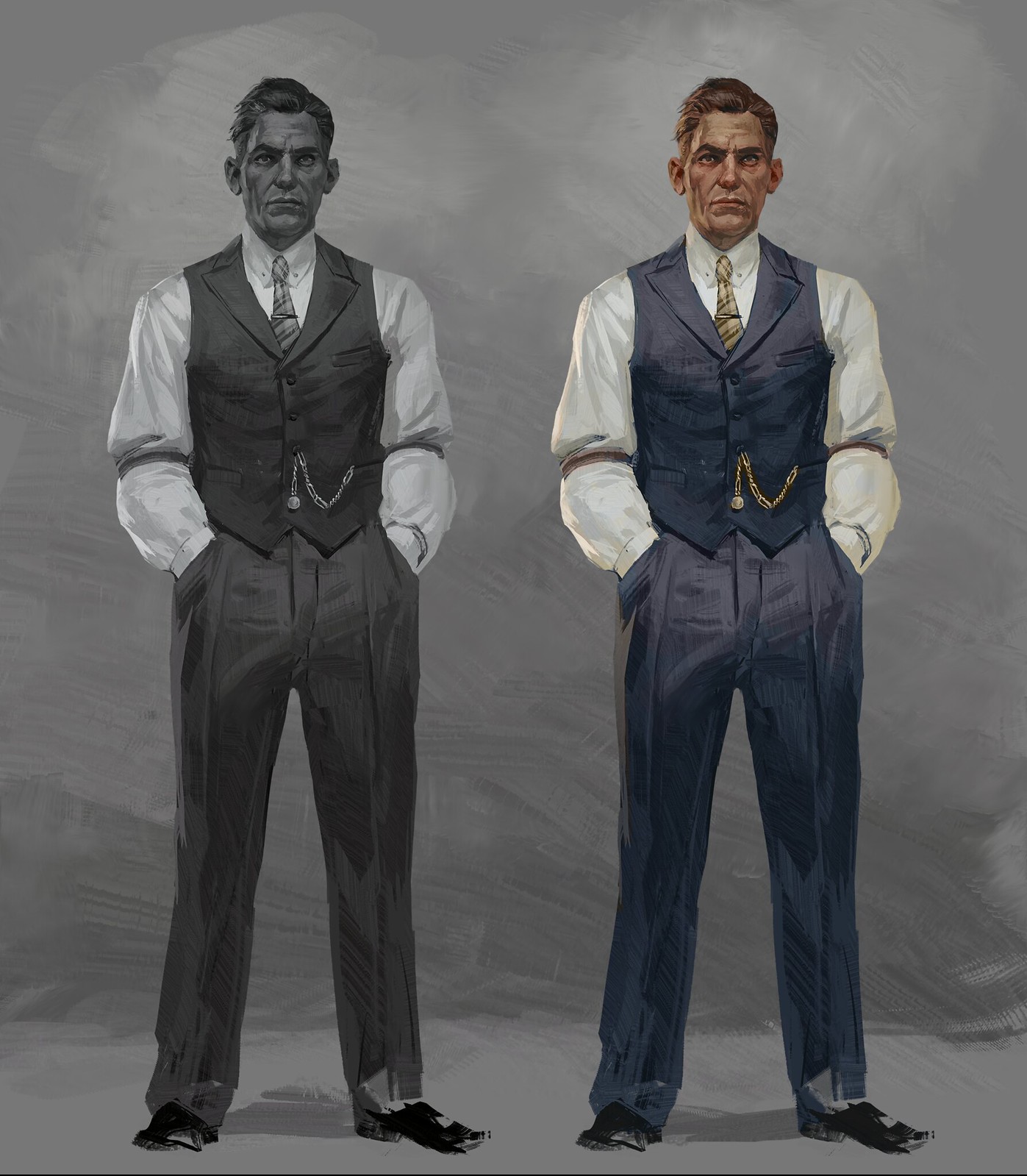 He can force a truce between two warring factions, and when money is tight, he charms Gangsters into working without pay for twice as long as they usually allow. That’s not even including Maxim’s unique combat ability! Bolster the Ranks is one we already know will be a fan favorite. In combat, when the chips are down, Maxim whistles in two bodyguards, packing serious heat, to help turn the tide of the fight. It’s an awesome feature that changes the dynamic of combat, and one that is a lot of fun to play.

Along with Maxim comes a new business venture to make money from. Loan Sharking opens its doors in Chicago, offering a racket type that doesn’t rely on alcohol to function. Of course, this doesn’t make for an easy, money printing service. Loan Sharks are integrated with the economy, and although they don’t have customers in the way conventional rackets do, they still affect the Precinct economy.

A dollar that’s paying back a loan, is a dollar that can’t be spent in a speakeasy! Then there are the clients themselves. Loan Sharks have a unique set of events tied to debtors who cannot pay you back and are banking on your input to let them off the hook. How you deal with them is completely up to you. Your honor rating influences the chances of default, so if you are a Boss of your word, then people know they have to pay. Letting too many payments go, however, results in damage to your honor, so keep in mind that some people will have to learn the hard way.

There are a few other new faces in town, too. Included in the Make It Count DLC are The Fixers, five brand new gangsters, who specialize in making problems go away. From crooked Judge, Ma ‘The Pillar’ Miller, to Black Market artifact dealer, Dr. Ada Santos, each Fixer’s background provides for a unique, memorable character. Having a Fixer in your crew allows you to hire two Gangsters that hate each other, thanks to their mediation skills, and allows you to bribe your way out of certain combats. Though, after hearing what they can do in combat, maybe a scrap will be just what you’re after. 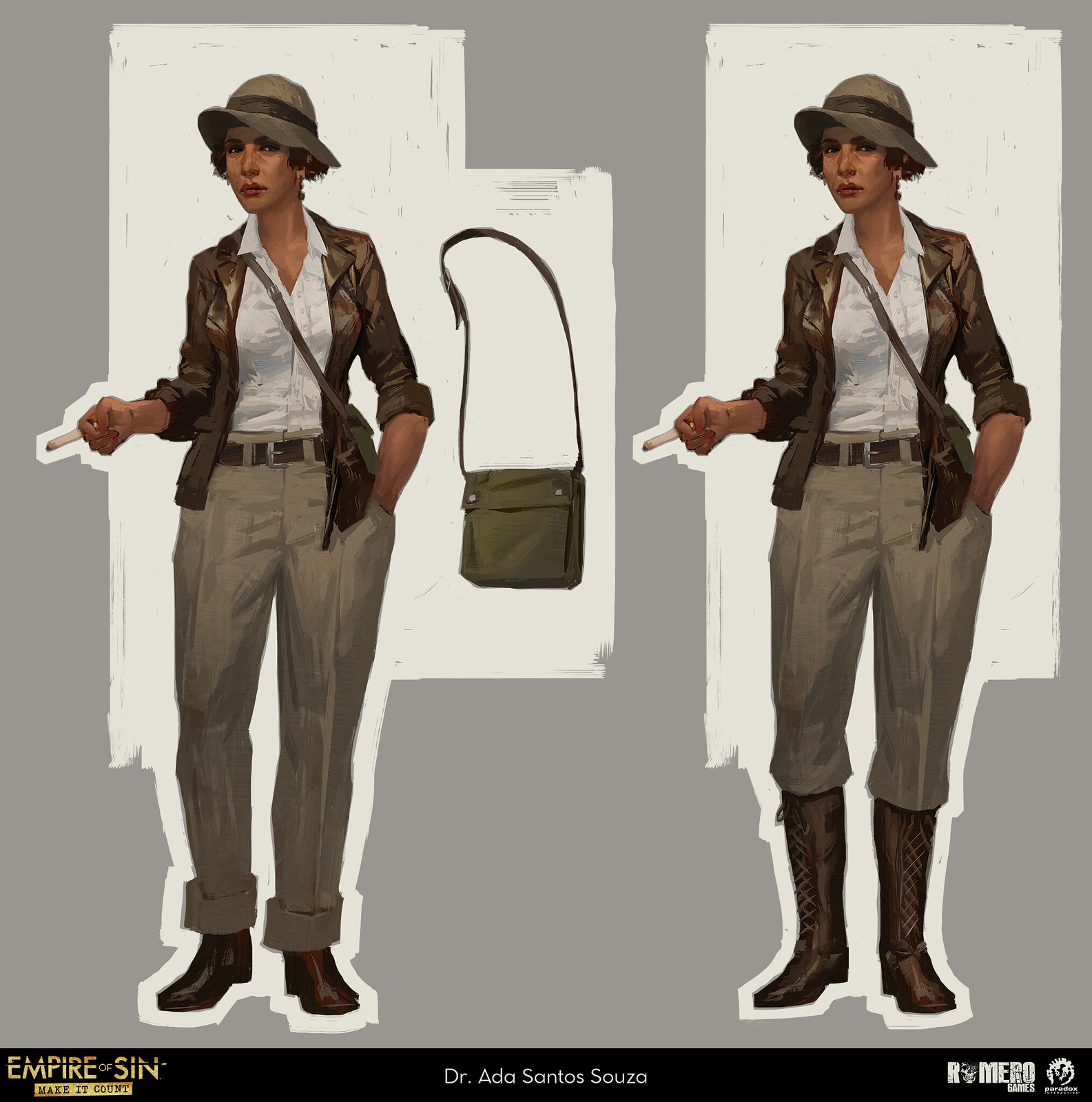 Fixers have unique abilities like Booby Traps and Crows’ Feet. Crows’ Feet are spiky area-denial weapons, perfect for crowd control in dense buildings. They are super effective and when launched at the right time during combat, can put you in control of the fight. 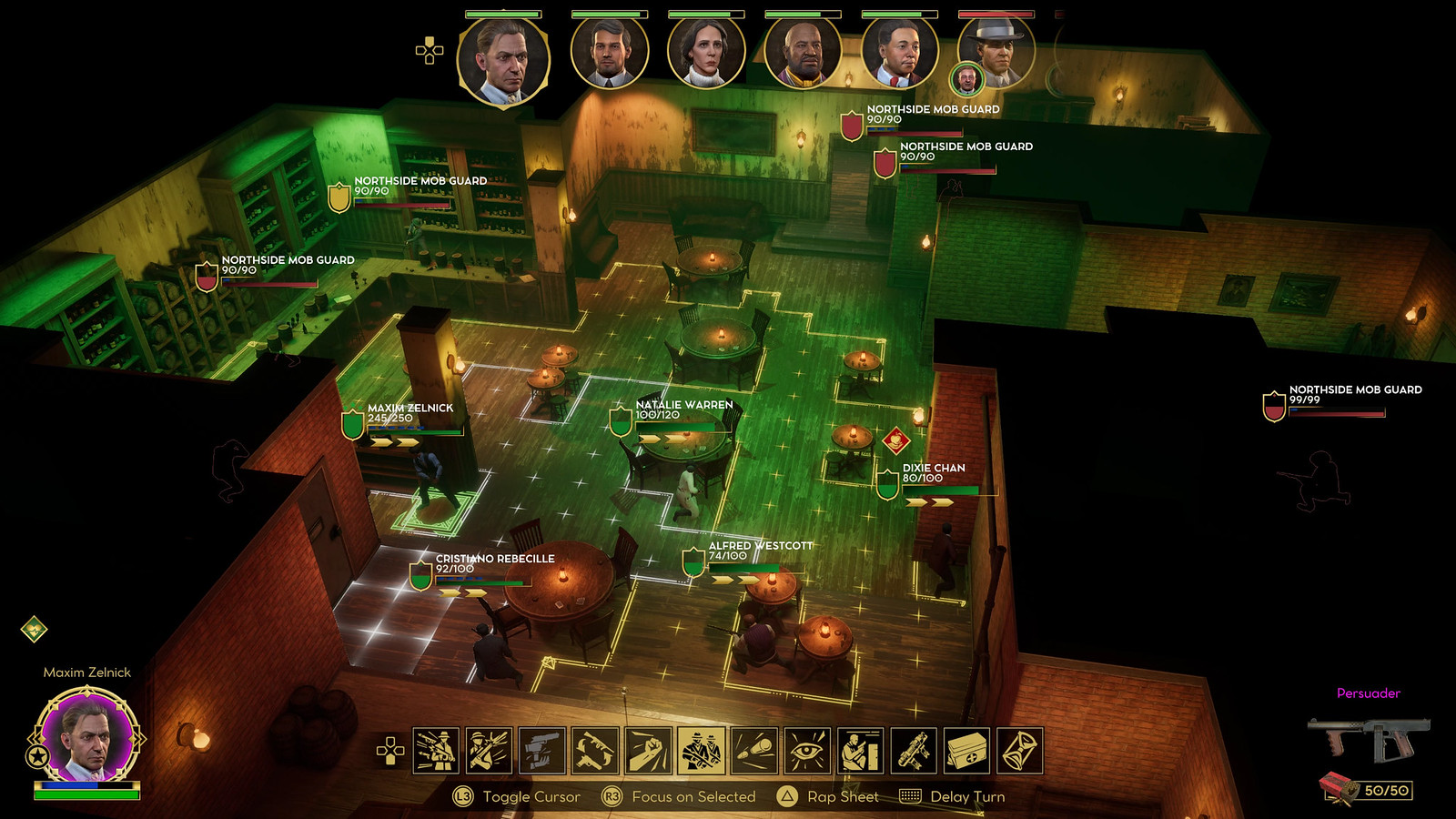 Beyond everything mentioned here, you’ll be kept busy with a bunch of new missions and events, along with new items, weapons, interiors, paths to victory, improvement buildings, and boss reveals. Maybe it’s best to spare some details, though, we wouldn’t want to spoil the surprise.

We can’t wait for you to see how Empire of Sin plays with the Precinct Update and Make It Count DLC, both launching on November 18.