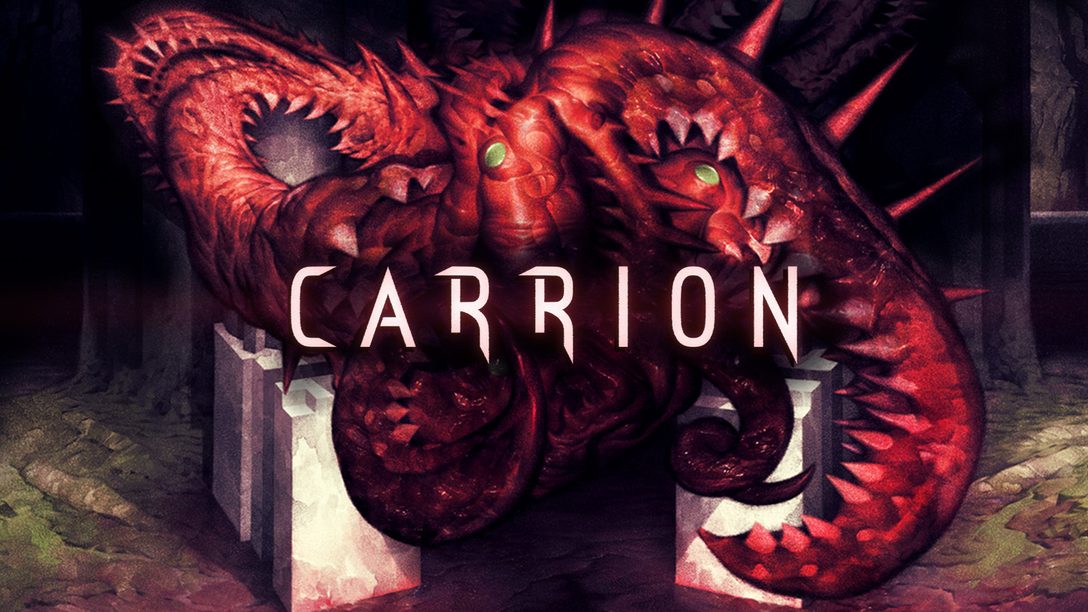 Hello! I’m Sebastian Krośkiewicz, one of the guys behind Carrion, which we’re thrilled to be releasing on PlayStation 4 today! I know, “finally,” right? I’m mostly responsible for the programming, art, design, and general direction of the game, so I’m here to elaborate a little on what went into the game and what you might expect when it wraps its tentacles around you.

The development of the game was a fun – albeit bumpy – ride. In spite of the “reverse horror experience” catchphrase we’ve been using (which, admittedly, works reasonably well), I believe that the idea alone is not what makes our game truly unique. Coming up with the concept was, in fact, the easy part, given our twisted hearts had already been consumed by the Alien and Predator campaigns in Aliens vs. Predator 1 & 2.

Being also somewhat obsessively inspired by the concept of John Carpenter’s The Thing, I couldn’t help but wonder why an amorphous antagonist could never get its own video game adaptation. As a programmer eager to explore the idea, I set to work writing the first lines of movement code and soon found that making the concept “work” was actually quite simple. Making it feel rock-solid and fun to play, however, was the real challenge – it turns out arcade-inspired, monstrous fluidity is not an easy thing to capture!

Of course, Carrion isn’t the only game to feature an amorphous physical blob as its main character, but I feel that the movement problem has understandably put many developers off exploring the gameplay opportunities further. In our case, being an omnipotent shapeshifter with non-clunky controls also posed some game- and level-design challenges. First off, we were unable to use gravity as an obstacle. Secondly, nothing prevented the player from stretching across the entire room, so – depending on the monster’s location – closing off some parts of the level was tricky at times.

Game-breaking physics bugs were also more likely to occur due to the number of co-interacting bodies (i.e., parts of the monster) that responded to the same input. Our rule of thumb was to solve these issues without deteriorating the fun factor and to keep the workarounds sensible and explainable mechanically and lore-wise.

Having been on the brink of dropping the project several times during the development, I could easily see how other developers might prefer to take a safer path, but we’re called Phobia for a reason – we’re not afraid to take the scarier route to get to where we’re going! We proceeded to plow through all the challenges head-on and, remarkably, the game not only turned out to be fun and intuitive to play, but it also became very successful, selling hundreds of thousands of copies. The monsters finally won!

Game and level design aside, I feel that attention to detail might have played a huge role in our success. Even a great slice of meat needs some seasoning in order to become a juicy steak! Would Carrion be the same without its writhing tentacles? I’d argue it would lack one of the components critical to the overall experience. The tentacles, as soon as they get detached from the surface, are physically simulated and accompanied by a wide assortment of “gory” sound effects (fun fact – the trademark “whipping” sound was achieved by cutting the air with a USB cable), making the main character feel more organic and alive. On top of that, the blood and gore stains, the music, the tropes, and the screams all add up to the 80’s blockbuster horror vibe oozing from your screen.

That’s why we’re so thrilled to finally release Carrion on PS4. It took us a while to get there, but we believe it was well worth it. Make sure to grab it today at PlayStation Store, with a 20% off sale! Carrion has already changed our lives for the better, and we hope it will positively influence yours (if only a little bit). Have fun, eat humans, and stay safe.

Pick up the reverse-horror experience at PS Store today