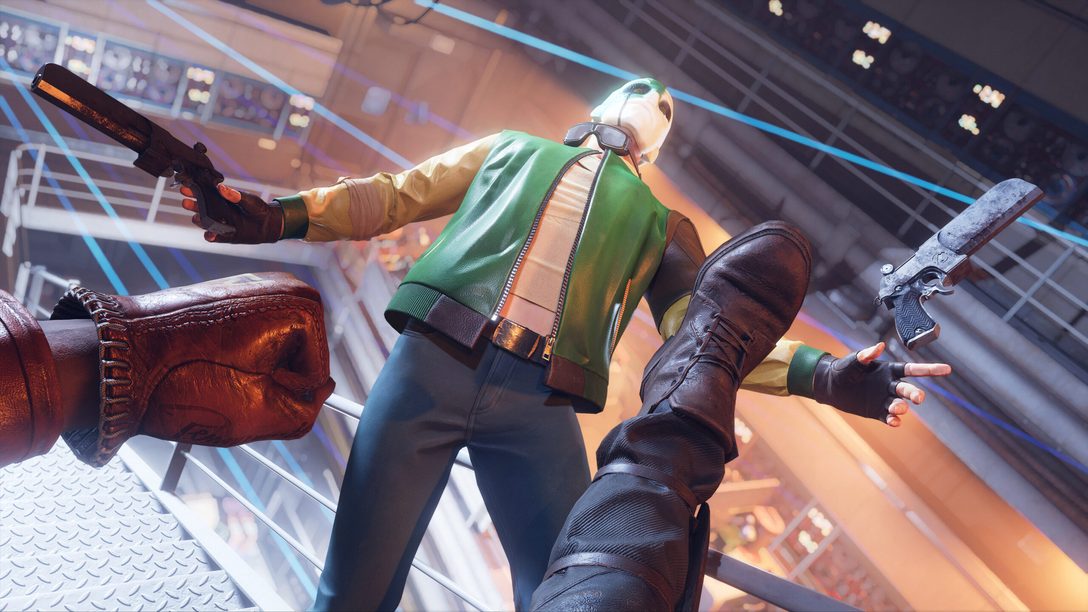 How Arkane Studios put the pep in Colt’s step.

Our team at Arkane has always loved a good kick. In fact, we’ve been looking for ways to get it back into our games for a while. We liked the Dark Messiah kick very much, but there was no real need for it in Dishonored as other systems were serving the same purpose. Finally, in Deathloop, we had our chance to resurrect it. We decided with this game we were going to expand on the melee combat by adding new tools and moves. Thus, we revived the kick.

The kick has gone through a lot of testing and evolution. I remember our earliest discussions were all about which kind of kick is the best kick. Dinga [Bakaba, game director] and I both practice different martial arts, so our coworkers would often see us talking about and performing front, back and rotating kicks. (No one was harmed in the process.)

The first code implementation was done by Gameplay Programmer Pierre-Adrien Branche. When we finally got it into the game, we did a lot of testing with animators to have the kick look good in both first- and third-person. We tried different legs, size, leg orientation… You name it, we probably tried it. We experimented with different kicks, like a low kick when aiming below the horizon and a (very cool) flying kick, but that one became useless when we decided that the regular kick would just shove an NPC.

Braune: In these comparison images, you can see that in an early version of the kick the foot orientation was different and the leg was displayed more in the center of the screen. To free some space and prevent visual noise around the crosshair, the leg position and foot orientation was later moved further to the right.

Foudral: When we were finally happy with the visuals of the kick, a lot of work was put into making it responsive and easy to use in all situations. We had a lot of rules in place: it should never block the player controls; It should be powerful without being overpowered; etc. There was a lot of back-and-forth between the programmers and animators to make it work. (A lot of NPCs were harmed in the process.)

Braune: There was a whole balancing act when we were working on making sure the kick wasn’t too powerful. We didn’t want the player to get rid of enemies too easily in combat, so we established a new rule. On unaware enemies, one kick will make them fly away, but on aware enemies a single kick will simply knock them off their balance. Then a second kick performed within a short timeframe would make the enemy go flying. We love that the kick also gives a bit of an incentive for stealth as a cool “you didn’t see this coming” bonus attack.

If you played Dishonored and Dishonored 2, you know we love playing with ragdoll physics. The kick feature really emphasizes this love. Animation Director Damien Pougheon made some great ragdoll kick poses and animations that could be driven nicely by physics. Gameplay Programmer Emile Jonas provided a way to edit data easily for the impact on NPCs. To achieve the perfect results, we applied some linear velocity (for the strength of the impact) and angular velocity (to make the body spin a bit). With animations and impulses tweaked, it all came together to make the kick super dramatic.

Foudral: There was also a lot of testing done with inputs to see what felt the most intuitive. We treated the kick like a weapon; the “trigger” is on the camera side of the gamepad, like we would do for a gun. We ended up mapping the kick to the right stick so it could be triggered quickly in the context of a moment of panic.

Braune: Just for fun, we even developed a system that detects when an NPC is near a ledge or breakable item, so they’re automatically pulled toward it. We knew this game system would have some comedic potential, but actually seeing it in the hands of the players… it’s just a totally new level of awesomeness for us.

Foudral: In the end it was a good design lesson, and one that showcases something we hold true for all Arkane games. Things need to be cool, but above all they need to have a purpose. And what better purpose is there than giving players the chance to kick someone off a cliff?

Wield Colt’s devastating kick for yourself in Deathloop, alongside an arsenal of powerful weapons and reality-warping powers. Dive into the action-packed timeloop FPS, available now on PS5.

Purchase at PS Store and break the loop today