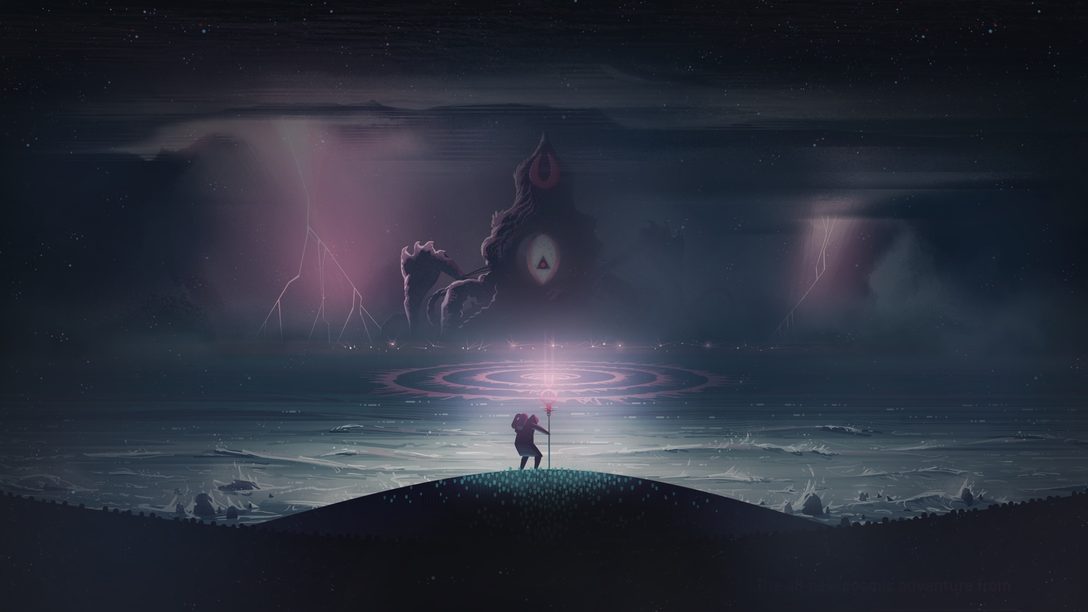 Put on your headphones and dive deep into Jett’s soundscapes.

Jett’s out now, it’s resonating, and we’re thrilled. It’s the latest videogame from Superbrothers A/V and Pine Scented, it was co-created for years by two full-time people and composer scntfc, then bolstered by an all-star Jett Squad of contributors. It took a village to get Jett done, and we’re all immensely proud of our efforts together.

Jett is my second video game as director, writer, art director, and music coordinator, among other roles. Unlike Sword & Sworcery, Jett is grandiose, with depth and breadth, intricate, and byzantine.

So, I had a pretty heavy workload for a while there. However, an advantage of being at the intersection of those roles is the opportunity to try to craft something very distinct, in keeping with the Superbrothers A/V approach.

Foundational to creating a distinctive vibe, and powering Superbrothers A/V’s approach, is audio. Sound and music, and how they fit. Getting the spirit of the music and sound right is essential, as music ends up being foregrounded in our videogames, often becoming almost the primary text.

For Superbrothers: Sword & Sworcery EP we collaborated with Toronto composer, maestro Jim Guthrie, whose immediately appealing and memorable score accounted for so much of sworcery’s magic.

As an album it found its way into headphones and speakers around the world, and resonated.

This time out, for Jett, we were so fortunate to have on deck the brilliant Seattle-based composer scntfc since day one, with whom we collaborated for years.

C Andrew Rohrmann, known in the biz as scntfc, has since composed beloved scores to several video games, most notably Oxenfree. However, scntfc’s first videogame contribution was to Sword & Sworcery back in 2010.

On Sword & Sworcery we had the idea for a “number station transmission” and we were put in touch with scntfc, who cooked up some relevant audio in his laboratory, audio that ended up in Sworcery’s “moon grotto” as well as at Sworcery’s memorable finale.

As I explored scntfc’s back catalog I encountered sweeping atmospheric music and rich ambiances, and these immediately became Jett’s target vibe.

It was evident to me that scntfc was precisely the right person to carve out a broad musical terrain for the science fiction universe Patrick and I were then feeling compelled to build.

I travelled to Seattle in 2013 and 2014 to pour Jett’s audio foundation alongside scntfc, in his underground laboratory. His instincts, preferences, ideas, and insights shaped Jett’s aesthetics and feel in innumerable ways, he had a creative seat at the table with Patrick and I throughout.

Jett’s audio design and musical score was something we shaped together, with me steering and curating, and Andy composing and inventing. At a certain stage, in around 2016, it became necessary for scntfc to build a single grandiose musical edifice to align and harmonize all the discrete pieces of music he had previously been composing. The result, the sixteen minute “Soak In Brine” is Jett’s low-key overture.

Then in 2019 we were able to assemble an all-star Jett Squad, Jett benefited from heavy lifts from A Shell In The Pit, an audio vendor company in Vancouver who delivered on, and surpassed, our vision for sound effects and voices.

Also integral to Jett’s soundscapes are the contributions of Priscilla Snow, whose expertise made “the hymnwave” possible, as well as the choral music heard here and there. Priscilla was also crucial in the creation of Jett’s in-game spoken language, “volega”.

In the clip below you’ll hear all this in Jett’s memorable first few moments, as the player abruptly awakes in a hutt on the steppes, emerging into the warmth of a mournful farewell song before ‘mounting up’ into the jett and going aloft..

Another song that has a very special place on Jett’s score is Jett To Cosmodrome, which is derived from a pre-existing song by new age composer Morgan Kuhli, a friend of scntfc’s who lives quietly on an island off Oregon’s misty coast.

When Jett was just a baby, a simple prototype put together over a weekend in 2011, our Jett gameplay began with a distinctive wind-up sound and this song.

Now, ten years later, a Jett-ified iteration of this song accompanies the players first moments at the helm of the jett.

To me this song has always struck a perfect tone for those first feelings of flight and wonder, and we couldn’t resist using this song on our launch trailer last week. It is warm, wonderful, and nostalgic. For those of us aboard Jett Squad, it bottles up a lot of emotion.

So please, soak in this ocean of new music, devised over long years by the brilliant composer scntfc, in deep AV collaboration with me, at Superbrothers.

I recommend you experience scntfc’s work first in-game, then seek out Jett: The Far Shore’s Official Soundtrack, two hours of atmospheric music from the videogame ranging from symphonic spectacle to otherworldly synths, ambiances and off-kilter oddities, and old songs sung under new stars.

Carve out an adventurous future in Jett