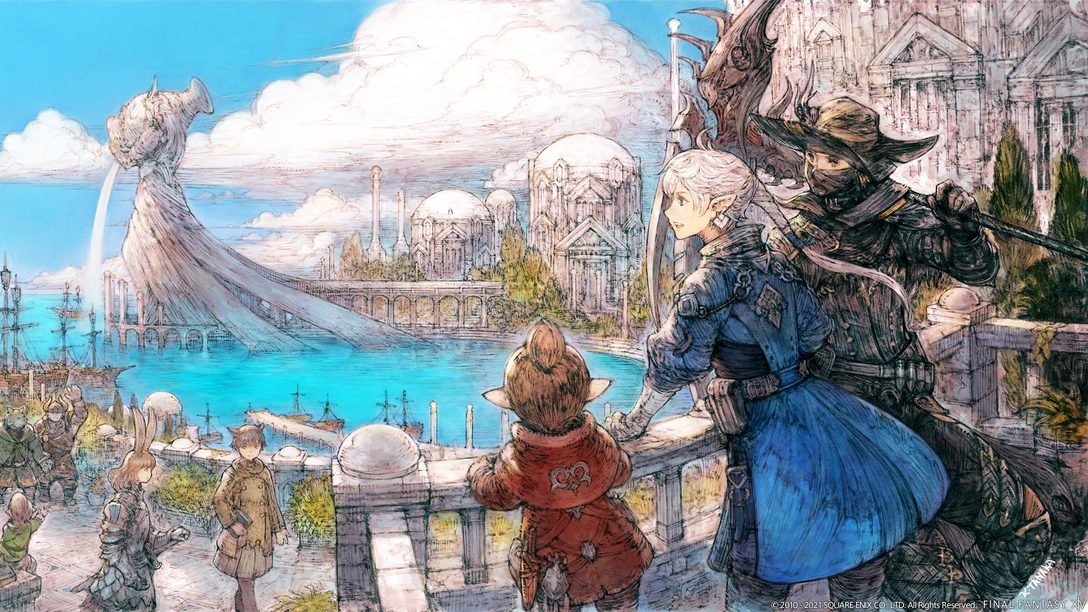 Producer and director Naoki Yoshida takes us through the journey of the most profitable title in the Final Fantasy series.

In the industry, the development story of Final Fantasy XIV has reached an almost mythical status. After a difficult launch, the second massively multiplayer online RPG of the Final Fantasy franchise needed salvaging. Producer and Director Naoki Yoshida, an avid MMO player himself, was the one tasked with this herculean undertaking, a process that led him and his team to rebuild the game from the ground up and relaunch it under a fitting new name, Final Fantasy XIV: A Realm Reborn.

Endwalker’s brand-new title screen, a sight that will welcome players from the 19th of November.

As a 1.0 player myself, I vividly remember Yoshida-san’s initial introduction to the community. Aware of the awkwardness of the situation, the newly appointed producer chose to address players directly. He introduced himself and his preliminary plans in what he called a “Letter from the Producer” – a written account to the community that set the tone for a two-way communication that endures to this day, initially gauging players for direct feedback in a handful of small, targeted surveys, assessing expectations and wishes for the game they were playing despite the tumult.

It wasn’t until months later than the idea of A Realm Reborn was formally introduced. Final Fantasy XIV would be “nuked” to be reborn anew – both figuratively and quite literally. In 2012, after a climactic cinematic and months of increasingly gloomy in-game updates, the servers shut down. A few months later, A Realm Reborn would introduce a brand-new world to explore.

The final days of Final Fantasy XIV before its shutdown and eventual 2.0 rebirth. Players had no idea what terrors slept in Dalamud, the ominous red moon…

Now, eight years since A Realm Reborn’s release and on the eve of its fourth and largest expansion to date, Final Fantasy XIV boasts more than 24 million players and has become the most profitable title in the Final Fantasy franchise, a feat largely attributed to the diligent work of Naoki Yoshida and his team.

As part of Square Enix’s recent Media Tour, I was able to play a preview version of its upcoming expansion, Endwalker. Brimming with content, this new behemoth of an update will increase the character level cap to 90 and will introduce two brand-new playable jobs, a male variant of the fan-favorite Viera race, and a wealth of raids, dungeons, and other new content to the MMO. Tag-teaming with fellow interviewer Jade King from TheGamer, I was able to get Naoki Yoshida’s thoughts on the current state of the game, Endwalker’s development, and his own journey all the way to this new release.

Now with the additional title of Director, Yoshida still regularly hosts his Letters of the Producer, nowadays presented during livestreams in a continuation of this now decade-old tradition. The latest instalment, the 66th to be exact, presented in detail some of the exciting gameplay features to be introduced in the upcoming Endwalker expansion, fostering the excitement of players all around the world.

The unique relationship Yoshida has nurtured with the game’s community since the start of his involvement has become a key part of what makes Final Fantasy XIV special to its players. “From our perspective in the XIV team, we don’t think of the players as just players,” he goes on to explain, “we really look to them as our friends and part of our family, we’re in this game together.”

Perhaps most importantly, Endwalker will close the chapter of a story arc that stretches back to 2010, before the game’s relaunch. Hydaelyn and Zodiark, two deities of the realm eternally at odds with one another, are prophesied to resolve their conflict in a climactic end to the age-old saga. But we’ll have to wait for the 23rd of November to know more on that…

In the preview, I tested the two brand-new jobs: the mecha-inspired barrier healer Sage and the incredibly fast and powerful melee DPS Reaper. Both felt incredible to play, Reaper offering a satisfying flow of attack phases that culminates in a rapid, dispossessed burst of strong combos, and Sage showcasing intricate, pleasing-to-the-ear healing abilities that seem primed to handle wave after wave of incoming raid damage. The design of these two jobs and the overall abilities rework seem to hint at interesting developments for the game’s ever-hungry raiding scene.

The three new areas I was able to explore were an absolute dream to any Final Fantasy fan, featuring the gorgeous, ancient Greek-inspired Old Sharlayan, the culturally dense and colourful lands of Thavnair, and their complete antithesis, the monochrome and cadaverous lands of Garlemald, three lore-established areas XIV players have been longing to explore for eons.

Up – the vivid grounds of Thavnair, down – the colourless ruins of Garlemald.

“Our approach to designing new areas is a bit different for each expansion,” explains Yoshida, before going on to clarify: “In the case of Stormblood, for example, we had Ala Mhigo as a location. This was a place that was already established in the lore in Final Fantasy XIV, so for a location like that we didn’t really have much freedom and leeway to incorporate our own ideas. What I did instead was think about the remaining areas that haven’t been shown to the player yet.

“Endwalker is going to mark the end of the Hydaelyn and Zodiac saga, so for this expansion, we focused on the loose ends we have in the current story arc. Deciding on those aspects and creating the maps for the new areas go hand in hand, so in this respect, the process with Endwalker was a bit similar to what we did with Stormblood.”

Alisaie and Alphinaud Leveilleur, twin Scions of the Seventh Dawn who have both been central to FFXIV’s ongoing story, return in Endwalker.

Of course, I was only able to play through a selection of the many new environments due to be introduced in Endwalker, some of which remain secret so players can experience them first-hand.

“There are some areas which we have not announced in Endwalker yet. I have no intention of announcing them until the game is released! I’m really excited for players to experience those regions themselves and I’m sure they will be surprised with what they find.”

The build of the game that I played was obviously stripped of any lore hints, meticulously preserving the storyline surprises Endwalker has in store for its players.

“I think if there’s one thing that really sets Final Fantasy XIV apart from other titles in the genre, it’s that we really aim for FFXIV to be a gold-standard, story-driven MMO,” says Yoshida. “I think that’s an important point of differentiation compared to other MMO titles.”

Reaper’s destructive limit break seen from the back

If FFXIV’s most recent expansion Shadowbringers is any indication, Endwalker will assuredly take players on a thrilling journey of remarkable reveals. In fact, Shadowbringers was so critically acclaimed that I simply had to ask if the team was feeling any pressure with its follow-up.

“I believe that various players will have their own opinions and preferences. There might be some who enjoyed Heavensward better than Shadowbringers, and others who preferred the journey-centric adventure we had in Stormblood.”

“My approach is to always go one step further and raise the bar we’ve previously established, striving to create something better with each instalment.”

“Having said that,” he continues, “Endwalker will in fact close the Hydaelyn and Zodiac saga, which has been carrying on since XIV was originally launched and carried through all of our previous expansions. In that respect, we have been working towards a huge climax. As a standalone expansion, the volume [of story] in Endwalker is huge. There really is a lot to get through.

“I would be glad if… after you’ve played through the whole of Endwalker, why not go through the previous expansions and play through them again? Then you might be able to appreciate the direction we’ve taken with Endwalker and all the intricate things we’ve done with the plot.”

This last sentence surely leaves a lot to the imagination, and I’m sure many players cannot wait to experience the end of this decade-long story for themselves… but wait we must.

Endwalker launches 23rd November, with early access from 19th November for those who pre-order. See you then!

This article is based on the play of an in-development build of Final Fantasy XIV: Endwalker, and content in the final version is subject to change. Interview answers have been slightly edited to improve brevity and flow. FFXIV 1.0 screenshots kindly provided by fellow meteor survivor and decade-long Eorzean friend Llen Coram.