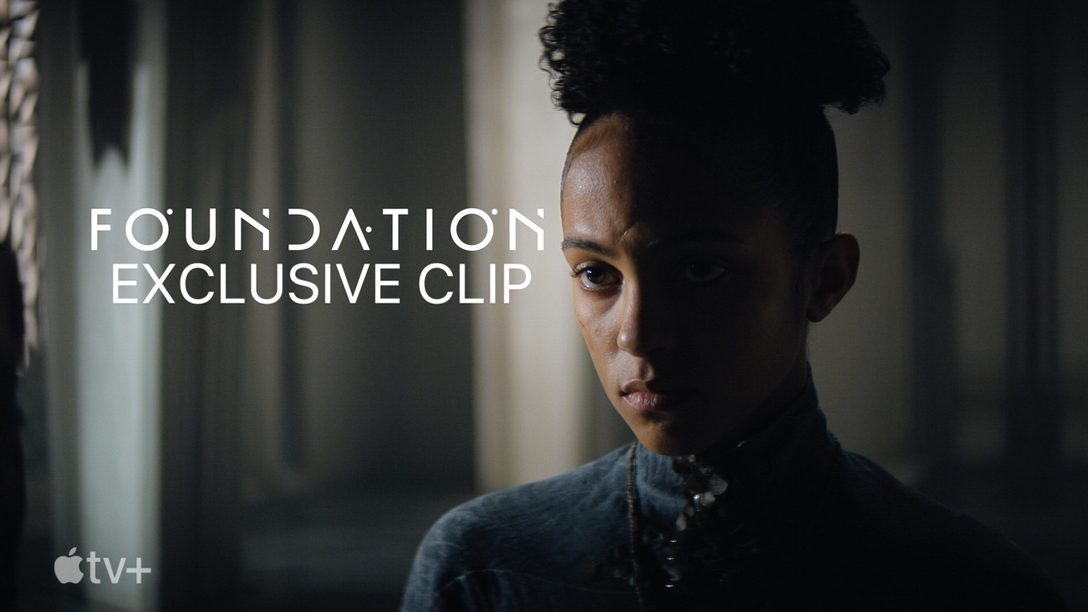 The celebrated filmmaker and writer discusses how the legendary sci-fi novel series will make the jump to Apple TV+ starting this Friday.

Thanks to the new Apple TV+ offer, I’ve been catching up on some terrific TV shows and movies over the past month – Ted Lasso, See, and Greyhound just to name a few.

This Friday, Apple TV+ will see arguably its most ambitious entry yet with the premiere of Foundation, an adaptation of Isaac Asimov’s legendary sci-fi novel series. Foundation is about as big as it gets – a towering tale of how humanity survives the end of civilization.

I caught up with showrunner, writer, and executive producer David S. Goyer (The Dark Knight) to learn more about how the accomplished writer/director planned to tackle this monumental new series.

The book series Foundation is legendarily difficult to adapt due to its epic scope… its plot spans many thousands of years. What appealed to you about tackling something so huge and complex?

DG: Hubris! [laughs] I was weaned on Foundation. My father introduced it to me when I was 13 years old, he said it was the greatest science-fiction work ever written. I first read it in my 20s… I didn’t completely get it. I read it again [once] I was a father, and I understood more how important and revolutionary it was. Also, twice before in my career I was given the opportunity to adapt it as a feature [film], and I turned it down because I didn’t think it was possible to condense everything down into two or three hours.

It was only in the past six or seven years…when some of these giant streaming shows started happening, like Game of Thrones and others. You saw these big novelistic adaptations, and I thought that maybe the audience and the medium had matured to a place where Foundation might be possible. For the first time, we weren’t talking about having to condense everything – in success, we were talking about the possibility of being able to expand.

So the idea of telling this story across 70 episodes, or 80 episodes, that was really appealing to me. We don’t even get all the way through the first book in the first season. We can take our time, and really dig into the characters. The books were light on emotion, they were more about ideas and philosophy. But I think when people watch these shows, what hooks them are the emotion and the characters.

So I had to figure out ways to take Asimov’s themes and embody them in characters. And that’s what led me to create the Genetic Dynasty, which is not an idea that exists in the book. In the book, the Empire is resistant to change, it’s monolithic and rigid. And I thought, what’s the craziest expression of that? How do you take that to 11? Well, what if the Empire is the same Emperor cloning himself again and again and again, and imposing his ego across the galaxy? That was my way of exploring Asimov’s theme. And that led to all these interesting character things we could do with the Emperor. It allowed me to depict the Emperors as monsters, but also these sympathetic figures who were desperate to individuate themselves, who were living in the shadow of Cleon I. That approach was kind of, in a microscope, my approach to the series writ large.

Asimov’s writing style is famously straightforward. Did you feel like you had a wide opening to leave your own creative fingerprints on this universe?

A little bit… I was a fan of the books, so I approached it as a fan. I don’t think it would be successful if I hadn’t liked the books. One of the first things I did was try to identify all the themes and elements of the books that I thought were essential. I reached out to the Asimov estate and I said, “this is what I have identified as what makes Foundation, Foundation. Do you agree with what I’ve identified?” And they said, “Yep, those seem like the most important elements.”

When Asimov was writing these books, he was using them as a mirror to reflect back on contemporary society. But that society was 70 years ago, it was a post World War II environment. We’re 70 years removed from that, so if I’m going to shine a mirror back on society, then I also need to be writing about today. I don’t want to preach to people, but subtly I want to be talking about today.

Did you have a creative breakthrough in terms of capturing the essence of this famously complex series for a modern audience? Was there a moment when you said, “I know how to do this?”

Yeah, it actually started with Gaal. So in the original trilogy, Gaal is the point-of-view character. Asmiov was very clever with what he did. When we pick up Gaal, Gaal is just arriving at Trantor having made a journey through space…[Gaal] can be the audience’s eyes and ears. You don’t have to have read the books, or know about psychohistory, or the Empire… you don’t have to know what it’s like to take a journey through space, to fold space. What’s cool about that is, then you can just ask yourself, what is it like for that country mouse who’s leaving a parochial world and going to the big city for the first time? Emotionally, what is it like to get on a spaceship, to be in zero gravity, to be terrified when space is folding and you’re breaking time and space?

Then I thought about the shape of the spaceships. We say folding space, but the Empire is kind of this patriarchy. They don’t think about folding space, but cutting space, cleaving space. That brings to mind the idea of a blade. So I said I wanted the Empire’s ships to look like knife blades that are literally cutting space. Everything comes from story, from character. If Gaal is our gateway to Foundation, and Gaal doesn’t know much about the universe that we’re exploring… that’s a real gift for the storyteller, and hopefully a gift for the audience.

In the book, the reader quickly learns that civilization’s downfall is guaranteed, with humanity left to stumble for eons through a dark age. It’s a grim premise – how do you keep viewers emotionally invested in a show where the stakes are so unfathomable?

That’s a good question. At the end of the day, Asimov was an optimist.… he had a lot of faith in humanity, in ingenuity, in technology, in rationalism. Later on, in the 70s and 80s, science fiction got much more dystopian and dark. Lord knows, in my career I’ve done a lot of dark projects! I think after [becoming] a father, I liked the idea of doing something that had high stakes, but fundamentally was a message of hope and optimism. If we work together, we can get through the dark times. That was an important message for me to convey, as a dad.

When I started the project, it was before the pandemic had hit. And everything became eerily more relevant once we were in post production. Making the show was incredibly hard during the pandemic, the cast and crew were all isolated for over a year. We couldn’t go home. At certain points in the filming, I would show the cast and crew scenes that we were doing. And I think we all felt like we were making something worthy, and something that might give people a sense of hope in these dark times.

There are a lot of wild concepts in Foundation: mathematics, sociology, psychohistory… how do you integrate all of that in a way that’s faithful but isn’t a college lecture?

A perfect example of that is our approach to math. Famously, Hari Seldon develops this mathematical formula for predicting the future [ed note: “psychohistory”]. On the surface, for people not into math, that could seem dry or academic. I was terrible at math when I was in school. Even with a tutor, I got Ds. I always had a block.

Math was boring to me, but I wanted to depict math as beautiful. And so I said to my design team, I want to find a way to visualize math that’s different from anything we’ve seen before. I know this will sound funny, but I want math to look like the language of angels. I want it to almost be this mystical experience. So we did a lot of development into the math, a lot of concept art, previsualizations, and beta testing with the visual effects. And we came up with this visual expression for math, and I think it is beautiful. And I said, great. Now we need to do that with every single thing in the show.

Are there any other epic TV series or film series that you’re using as a North star to help guide the production?

Um… there aren’t many TV shows. I would say the one TV show, and I know this will sound funny, is Breaking Bad or Better Call Saul. I love the storytelling on those shows. I love the way Vince Gilligan takes his time, the way that a huge plot device can hang on something tiny that you introduce in a prior season. He really trusts in his audience. I love the shades of grey that Gilligan writes in. I’m not interested in black and white, I love shades of grey, and that’s something we’re certainly exploring in this show. So even though it’s a crazy science fiction show, I would say Breaking Bad and Better Call Saul are definitely the things I talked about the most in the writers’ room.

Is there anything in our contemporary moment that in some way maybe parallels Seldon’s predictions and the Empire’s reaction to them?

I mean, obviously the pandemic. All the scripts were written prior to the pandemic, it’s not something we could have predicted. But the fact that we went through a pandemic 100 years ago, and sadly it seems like we didn’t learn a lot of the lessons from that pandemic even 100 years later. That’s very topical right now. I think the way that science has gotten politicized, things that seem like objective facts are kind of up for grabs. That’s something that Asimov was very interested in.

Climate change also occurred to me…

For sure, for sure. Climate change was something we were thinking about when we were writing the show. But since we wrote the show, in the three years since, it seems like we’ve reached this inflection point we weren’t quite at when we first were adapting the show.