Valfaris sequel switches genres, but stays true to its roots

The story behind Valfaris: Mecha Therion's move from platformer to shoot ‘em up.

As a developer, watching people play your game can be a nerve-wracking experience. It seems like an age ago (it was only 2018) that I was on a busy showfloor at the EGX Expo, peering over the shoulders of players getting to grips with Valfaris, the 2D action-platformer that myself and fellow Steel Mantis dev, Andrew Gilmour, were working on at the time.

Luckily, the reaction was overwhelmingly positive. The demo we had prepared was no pushover, and I remember seeing players dying over and over. But most were determined to push forward, and they eventually made it to the end with a big grin on their face. It showed me there was something about Valfaris that made people want to persevere and conquer it. Seeing this was an incredibly rewarding experience, and it made me feel we were making something worthwhile.

Fast forward to today, and we’re excited to be revealing Valfaris: Mecha Therion. Anyone familiar with Valfaris will immediately notice a major difference in the sequel – it’s not a platformer, but a shoot ‘em up. New ideas and features are, of course, entirely expected in a follow-up, but switching genres? Not so much.

Despite knowing players enjoyed the platforming action of Valfaris – as I’d seen first-hand at EGX and was reinforced post-launch by positive user and critic reviews – we both decided we wanted to do something new with the sequel.

Before we arrived at that decision, however, our original plan was to make a sequel to Slain: Back From Hell, a 2D hack-and-slash platformer we released in 2016. It was going to be a 2.5D platformer and we got as far as making a bit of gameplay with some 3D elements. We had a section with the character walking around a spiral staircase, and it looked pretty cool. Even at that point, though, I was already feeling that making another entire platformer was going to be a drag.

It was then Andrew suggested something totally crazy: that we abandon the project and make a shmup sequel to Valfaris instead. It was completely out of the blue, but I grew up playing games such as Thunder Force, R-Type, Gradius, and Raiden, and had already made a shoot ‘em up around 2008 called Cy-Clone, so I was very into the idea! 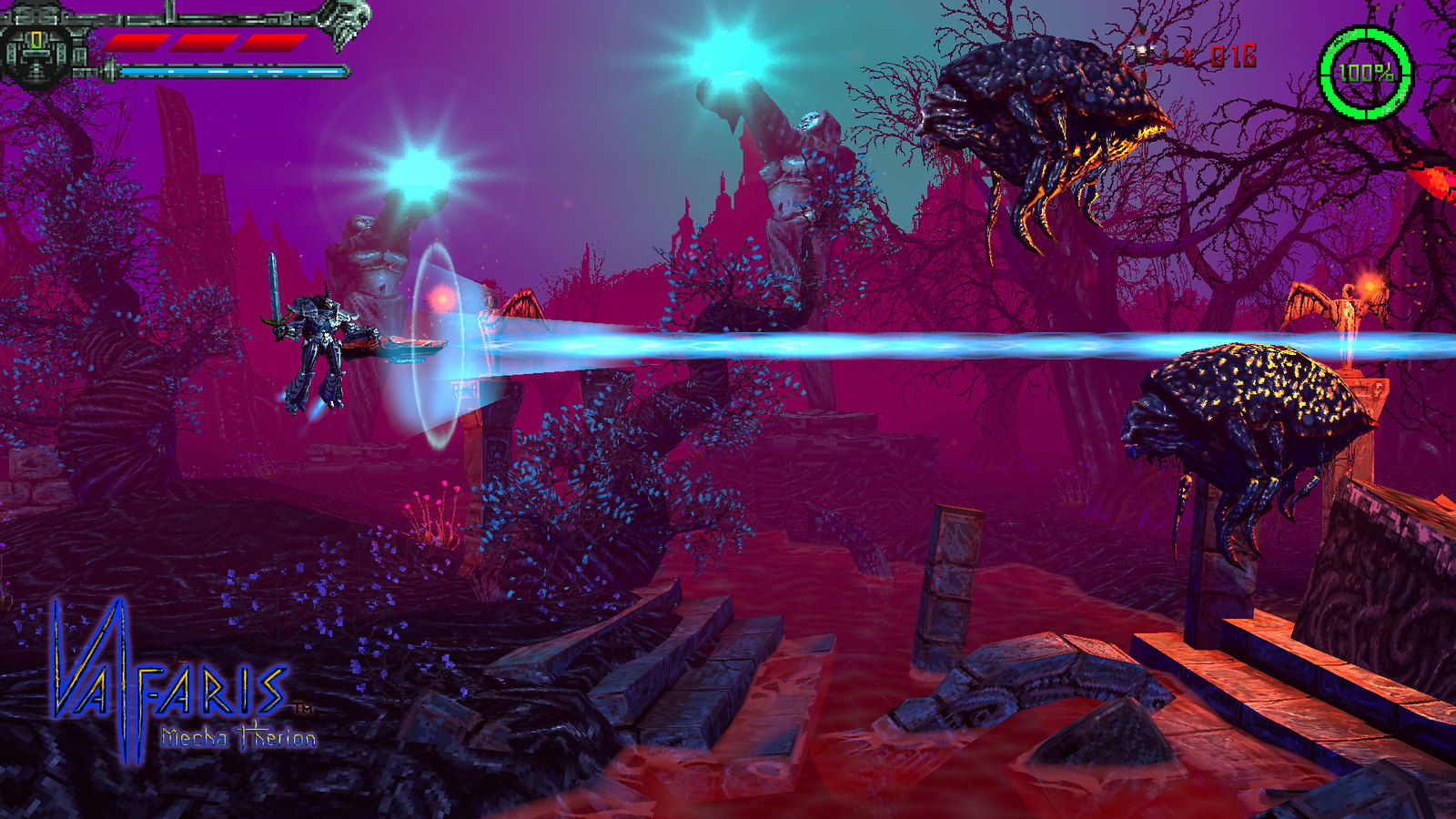 I was immediately enthused by the change in direction, and – as there are plenty of differences between a platformer and a shmup to consider – straight away started to think about the game from a design perspective. Most notably, a platformer generally allows the player to go at their own pace (rising water/lava levels not withstanding), be that cautious or charging ahead. A shmup, on the other hand, is constantly moving, so the player has no control over the pace of the game.

Because of this, you need to think carefully about such things as how often to throw enemies at the player, and how to give them enough time to react to new types of hazards. You also need to decide when to let the player have a breather, and for how long. There needs to be a flow and rhythm. 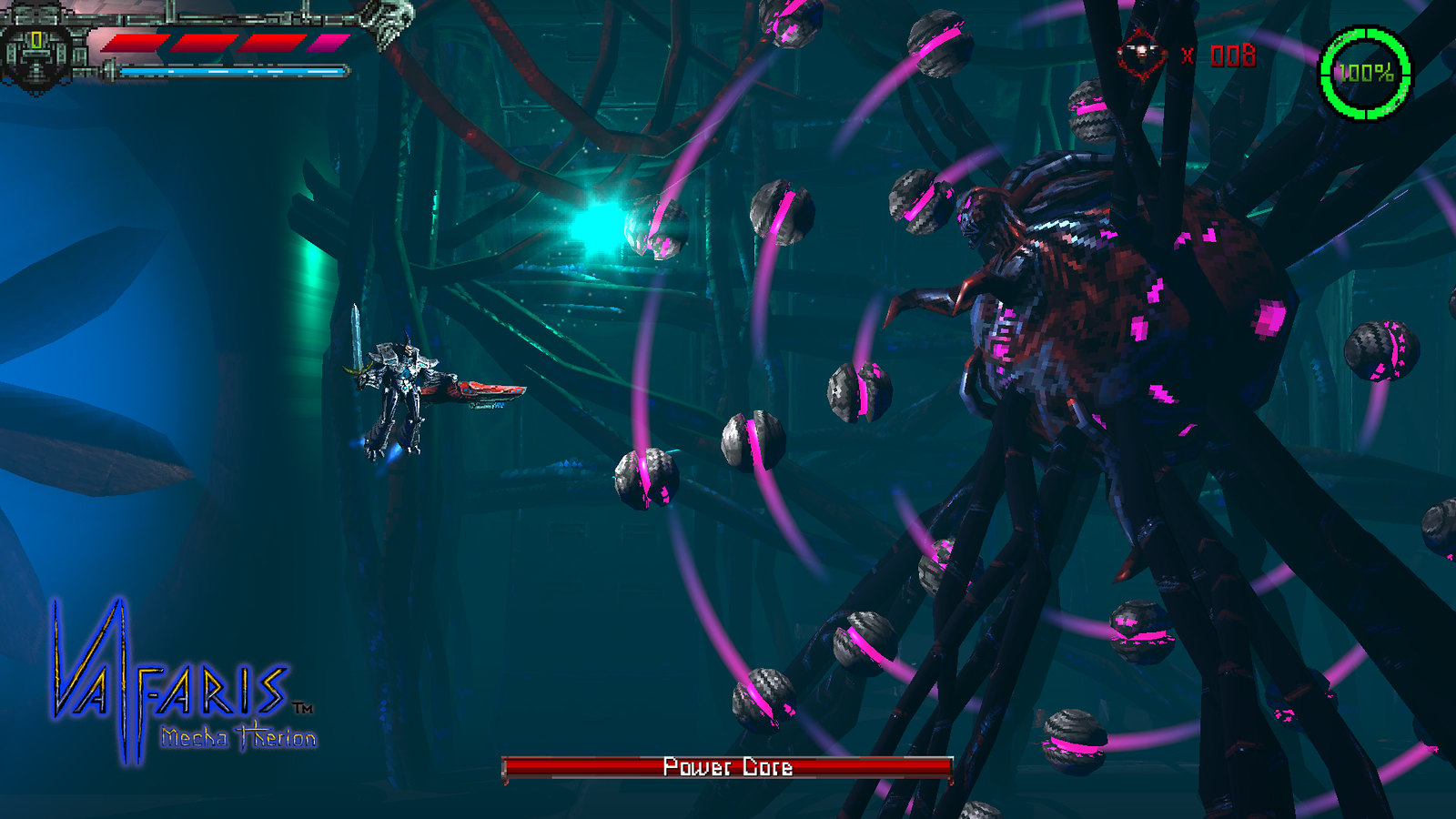 In addition to the genre switch, we also decided to move out of the 2D comfort zone we’d been working in for so long with our previous games, and to set Valfaris: Mecha Therion in a 3D space to really shake up the development process and get us excited. Ultimately, the gameplay is still 2D, but the extra dimension allows us to do cool things such as have enemies come in from the distance, have a much more cinematic camera, and have the player’s flight path go in different directions.

Yet while we have all these obvious shifts between the two games, the changes aren’t a drastic leap in terms of the player experience, and despite one being a platformer and the other a shmup, they are still unmistakably bound by a shared DNA.

It’s the same world as Valfaris, so the aesthetic will be familiar for anyone that’s played it. We’re carrying several features over, such as collecting and upgrading weapons (with plenty of those being favourites from the first game), a risk / reward checkpoint system, loads of over-the-top gore, and another metal soundtrack composed again by Curt Victor Bryant.

But it’s the most fundamental aspect that binds Valfaris and Valfaris: Mecha Therion – the gameplay. We think the people who enjoy our games do so for the challenge and the thrill of playing something with an authentic old-school feel that’s capable of putting a big grin on your face. And that’s exactly what we’re aiming to achieve again with Valfaris: Mecha Therion.

Valfaris: Mecha Therion releases in 2022 for PS4 and PS5.