First details on the 100-level Battle Pass, plus a new map and Contamination mode.

Last month, Splitgate started its open beta, a typically uneventful testing phase where us devs receive feedback and put on some minor finishing touches before the official release. However, our open beta was anything but typical.

If you aren’t familiar with what happened, long story short, Splitgate basically exploded (in a good way) which left our servers unable to keep up with the demand. In the span of a month, our servers went from supporting 4,000 players at once to 175,000 players! All in all, our servers had some growing pains, so we had to implement short-term solutions to prevent back-end crashes.

With our original plans completely changed, we decided to put off our official launch in favor of extending the beta to enable us to continue working on our servers while still giving players new content.

The Splitgate Beta’s next phase – Season 0

With Season 0 starting today, players will experience the same exact content we originally intended for the official release, but we’re still calling it a beta. Here’s what to expect from today’s update:

The new map, Karman Station, is the most beautiful map we’ve ever made, in my opinion. When you load up the game after updating, this should definitely be the first thing you check out.

Season 0’s Battle Pass has some of the best items we’ve ever made. Readers of the PlayStation Blog get a first-look at the Battle Pass. 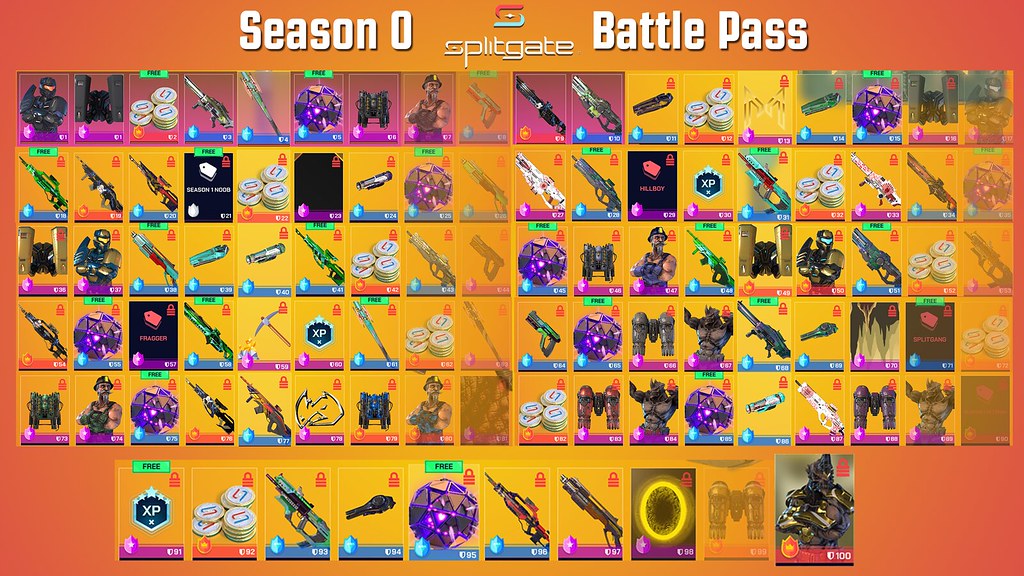 Another addition we’re really happy about is Contamination mode. Many players have been requesting it, and listening to suggestions from the community is something we pride ourselves on. Contamination is our first “asymmetrical” game mode where both teams are not equal to each other. When the contaminated team gets a frag on the normal team, when that player respawns, they become a member of the contaminated. We’re really excited to see the community’s response to it.

How did we get here?

By now we were expecting to be officially released, have a stream of updates coming, have a solid player base of a few thousand, and be steadily growing. Fate had other plans. Splitgate recently hit over 10 million downloads and 175,000 concurrent players during its beta test alone, so we’ll be staying in beta until we’re ready. This got us thinking, why did Splitgate blow up like this?

We were always optimistic that our game would eventually catch on, but no one expected the level of explosive growth we received this early. One theory we have is that Splitgate fills a void that players didn’t know they had.

The battle royale genre has dominated shooters since 2017. For many, this was the refreshing experience gamers were looking for. As ambitious as this might sound, this is something we hope Splitgate can replicate with its arena shooter foundation.

We’ve heard many on social media argue that “there’s nothing to play.” Obviously, there are plenty of games to play. What they really probably mean to say is, “there’s nothing out there that feels fresh and new.”

So how can Splitgate, an arena shooter, deviate from the Battle Royale mold and yet find an ever-growing player base? The short answer is its intriguing portal mechanic. Players who pick up the game quickly find that the portal mechanic quite literally adds a whole new dimension to the FPS genre.

Portals are an extremely rewarding game mechanic, once you understand them.

Another hypothesis as to why Splitgate caught on so strongly is simply its unique and fun gameplay loop. Players are already familiar with shooting mechanics, but when combining them with portals, it becomes a whole new experience. Here are a few examples.

Take a simple gun fight. The idea of “who sees who first” and “who has better aim” is flipped on its head. For example, a player can use their portal instead to flank their enemy from behind.

Portals even change the way mundane actions happen such as moving around the map. After we released on PC, one of our players discovered a movement technique called “triple-portaling,” which enables players to rotate around the level quickly.

Shooting enemies through your portal, playing keep-away with the objective, and inventing hilarious mini games in custom lobbies are just some of the reasons why portals keep players coming back for more.

This is just the beginning

As we expand our dev team at 1047 Games, we’ll be adding more and more features. We have plans for more customizations, a map editor, new weapons, new maps, and more. In the near future, PlayStation fans can also expect an update for enhancements in the game for the PS4 Pro and the PS5.

It’s been quite the journey for us, so we are quite humbled by all the attention and excitement around the game. We hope you’ll enjoy playing Splitgate when Season 0 releases today.

See you in the arena.

Your portal to the beta awaits at PS Store