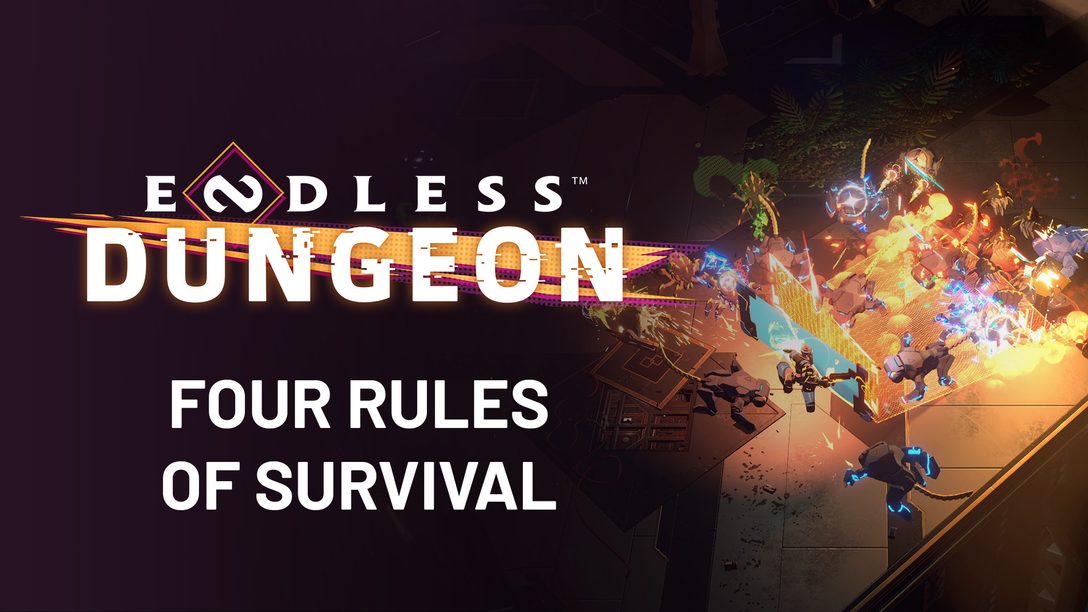 Hey all! Last year, we announced Endless Dungeon, Amplitude Studios’ next rogue-lite tower-defense dungeon-crawler (yes, it’s quite a mouthful), and the trailer and first glimpses of gameplay were met with a great deal of enthusiasm by a great many people. We are thrilled to see so many people eager to gather their teams and fight their way through an ancient space station to finally escape an endless loop of death and rebirth, yet one question has been on everybody’s mind: How does a game with this particular string of genre descriptors work, and how do you weigh the moment to moment action against tactics and long-term planning? That’s why today we’re back with a new trailer illuminating four basic rules of being successful in Endless Dungeon:

The station is inhabited by many critters of all manner of shapes and sizes. Some may be small and numerous, others large and imposing, but most importantly they are all quite dangerous, so you would do well to stop them quickly. Whatever you’re facing, you need to remember the strengths and weaknesses of your enemies and bring the right tools for the job.

A big gun that shoots lightning bolts might slice through tough robotic enemies, but it might not do so hot against the countless creepy crawlers bearing down on you. So when the swarm comes knocking, you better put away the lightning gun and kill it with fire instead!

To unravel the secrets of this ancient space station and learn to escape its endless cycle, you will need to power its systems with a mysterious object known only as the crystal. While the Crystal is invaluable to your quest, it’s unfortunately not terribly robust, and it attracts a lot of attention. You really don’t want a horde of monsters gnawing on it, but if you are to get anywhere in your exploration of this place, you really can’t stick around and babysit it. That’s where the turrets come in: Since you can’t be everywhere at once, you’ll have to protect the approaches to your crystal with a variety of turrets, secure choke points, and prepare a route to the next leg of your journey.

In a floating wreck filled with mysteries and monsters, it’s dangerous to go alone, so take some friends with you, and never split the party… unless you have to. Even keeping rule #2 in mind, you may still need to cover multiple directions, so you can’t group up and face every threat together, but you should always but you always need to keep an eye on your buddies and how they’re doing. Our heroes are exceptional individuals with a great deal of experience, yet even they might just not have the firepower to push back the onslaught, so be ready to move and help out in a pinch. Between your weapons and your abilities, focusing the attention of two or three heroes in the same spot is sure to see you through.

Even if you have mastered the first three rules, you might still fail sometimes, overwhelmed by wave after relentless wave of enemies. At times like these, the odds might seem insurmountable, and you might be tempted to quit, but perhaps it is simply time to let one of your heroes catch a break and rethink your team. Whether it’s raw firepower or survivability you need, a different group of heroes might just bring the skills (and perhaps synergies) you need to succeed.

We hope you enjoyed this brief look at how to survive, and maybe even thrive, in Endless Dungeon.